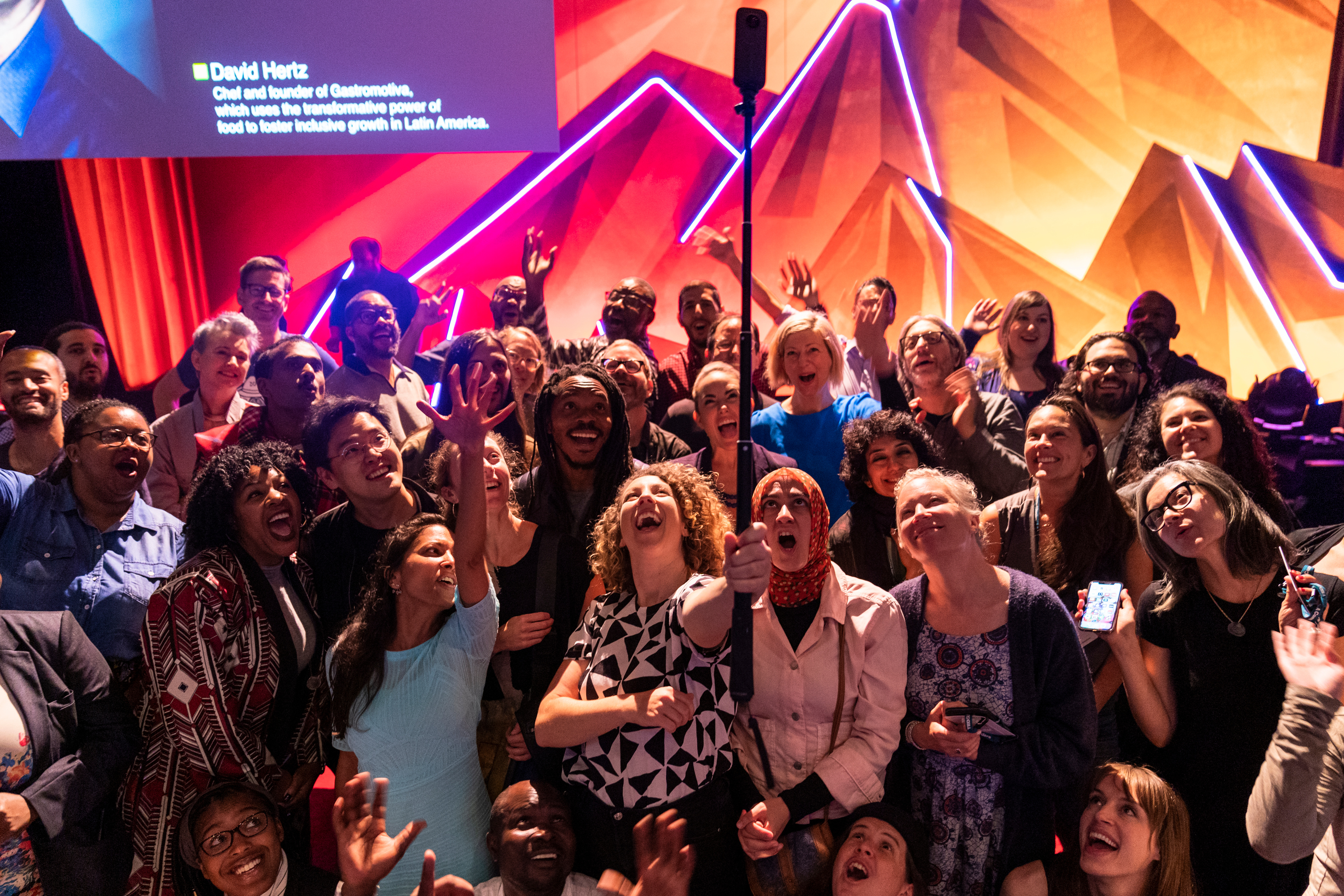 TED Fellows celebrate the 10-year anniversary of the program at TEDSummit: A Community Beyond Borders, July 22, 2019 in Edinburgh, Scotland. (Photo: Ryan Lash / TED)

When and where: Monday, July 22, 2019, 9am BST, at the Edinburgh Convention Centre in Edinburgh, Scotland

Opening: A quick, witty performance from Carl Joshua Ncube, one of Zimbabwe’s best-known comedians, who uses humor to approach culturally taboo topics from his home country.

Music: An opening from visual artist and cellist Paul Rucker of the hauntingly beautiful “Criminalization of Survival,” a piece he created to explore issues related to mass incarceration, racially motivated violence, police brutality and the impact of slavery in the US.

And a dynamic closing from hip-hop artist and filmmaker Blitz Bazawule and his band, who tells stories of the polyphonic African diaspora.

Laura Boykin, computational biologist at the University of Western Australia

Big idea: If we’re going to solve the world’s toughest challenges — like food scarcity for millions of people living in extreme poverty — science needs to be more diverse and inclusive.

How? Collaborating with smallholder farmers in sub-Saharan Africa, Laura Boykin uses genomics and supercomputing to help control whiteflies and viruses, which cause devastation to cassava crops. Cassava is a staple food that feeds more than 500 million people in East Africa and 800 million people globally. Boykin’s work transforms farmers’ lives, taking them from being unable to feed their families to having enough crops to sell and enough income to thrive.

Quote of the talk: “I never dreamt the best science I would ever do would be sitting on a blanket under a tree in East Africa, using the highest tech genomics gadgets. Our team imagined a world where farmers could detect crop viruses in three hours instead of six months — and then we did it.”

Lauren Sallan, paleobiologist at the University of Pennsylvania

Big idea: Paleontology is about so much more than dinosaurs.

How? The history of life on earth is rich, varied and … entirely too focused on dinosaurs, according to Lauren Sallan. The fossil record shows that earth has a dramatic past, with four mass extinctions occurring before dinosaurs even came along. From fish with fingers to galloping crocodiles and armored squid, the variety of life that has lived on our changing planet can teach us more about how we got here, and what the future holds, if we take the time to look.

Quote of the talk: “We have learned a lot about dinosaurs, but there’s so much left to learn from the other 99.9 percent of things that have ever lived, and that’s paleontology.” 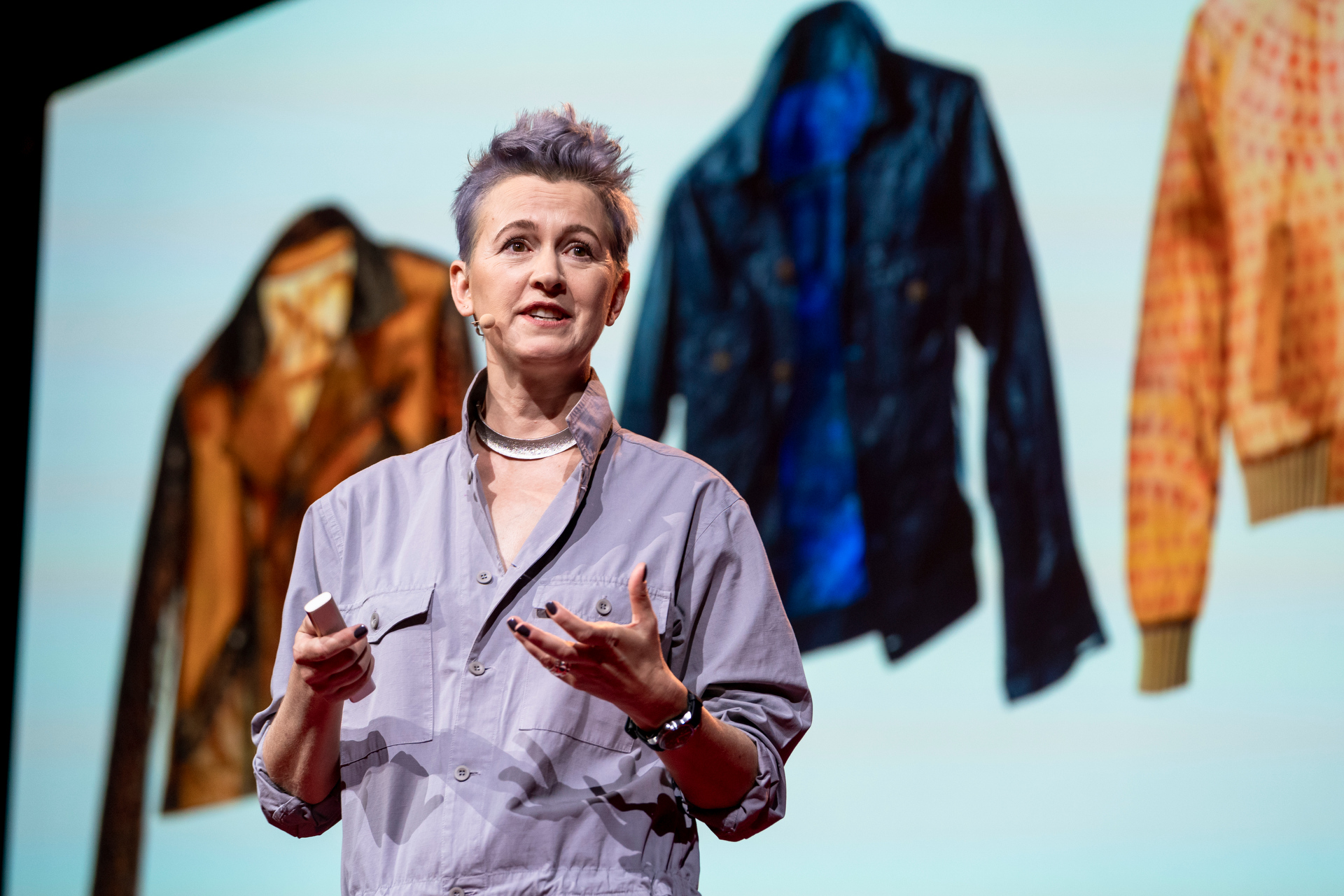 “If we applied the same energy we currently do suppressing forms of life towards cultivating life, we’d turn the negative image of the urban jungle into one that literally embodies a thriving, living ecosystem,” says Suzanne Lee. She speaks at TEDSummit: A Community Beyond Borders, July 22, 2019, in Edinburgh, Scotland. (Photo: Ryan Lash / TED)

Big idea: What if we could grow bricks, furniture and even ready-made fabric for clothes?

How? Suzanne Lee is a fashion designer turned biofabrication pioneer who is part of a global community of innovators who are figuring how to grow their own materials. By utilizing living microbial organisms like bacteria and fungi, we can replace plastic, cement and other waste-generating materials with alternatives that can help reduce pollution.

Quote of the talk: “If we applied the same energy we currently do suppressing forms of life towards cultivating life, we’d turn the negative image of the urban jungle into one that literally embodies a thriving, living ecosystem.”

Big idea: We need to get better at monitoring the world’s water supplies — and we need to do it fast.

How? Building a global weather service for water would help governments, businesses and communities manage 21st-century water risk. Sonaar Luthra’s company Water Canary aims to develop technologies that more efficiently monitor water quality and availability around the world, avoiding the unforecasted shortages that happen now. Businesses and governments must also invest more in water, he says, and the largest polluters and misusers of water must be held accountable.

Quote of the talk: “It is in the public interest to measure and to share everything we can discover and learn about the risks we face in water. Reality doesn’t exist until it’s measured. It doesn’t just take technology to measure it — it takes our collective will.” 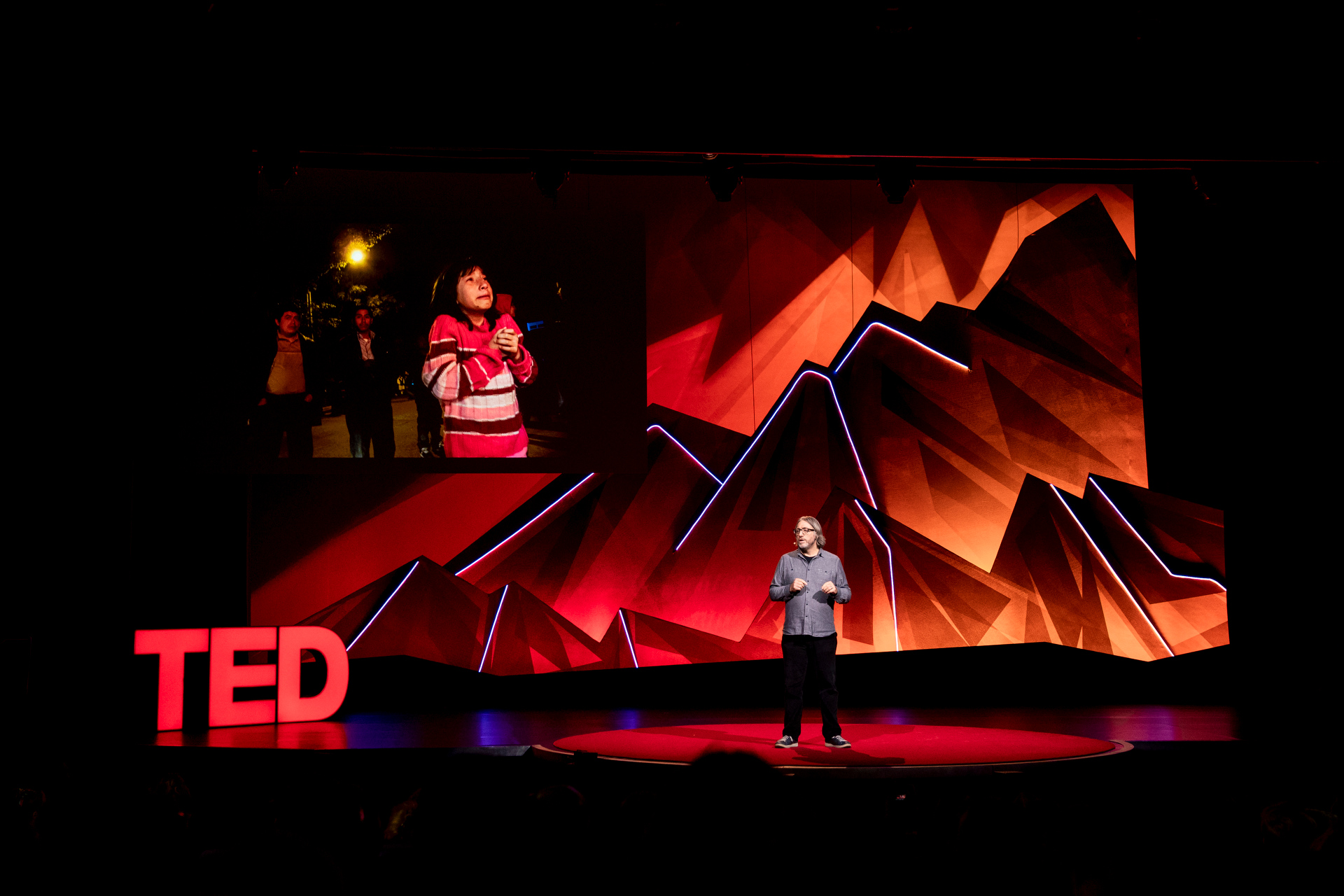 Big idea: We need to care about the humanity of migrants in order to understand the desperate journeys they’re making across borders.

How? For the past two decades, Jon Lowenstein has captured the experiences of undocumented Latin Americans living in the United States to show the real stories of the men and women who make up the largest transnational migration in world history. Lowenstein specializes in long-term, in-depth documentary explorations that confront power, poverty and violence.

Quote of the talk: “With these photographs, I place you squarely in the middle of these moments and ask you to think about [the people in them] as if you knew them. This body of work is a historical document — a time capsule — that can teach us not only about migration, but about society and ourselves.” 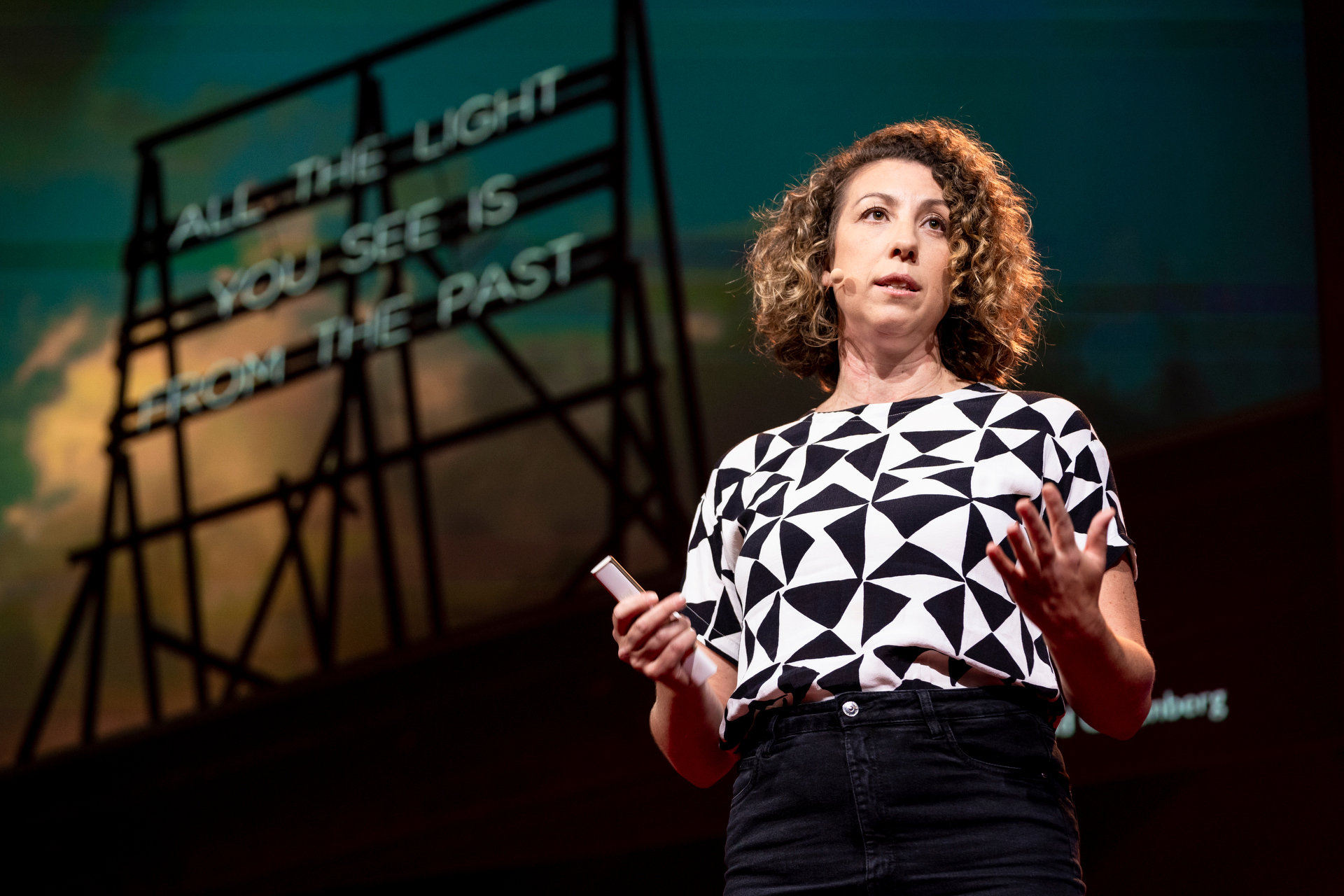 Alicia Eggert’s art asks us to recognize where we are now as individuals and as a society, and to identify where we want to be in the future. She speaks at TEDSummit: A Community Beyond Borders, July 22, 2019, in Edinburgh, Scotland. (Photo: Ryan Lash / TED)

Big idea: A brighter, more equitable future depends upon our ability to imagine it.

How? Alicia Eggert creates art that explores how light travels across space and time, revealing the relationship between reality and possibility. Her work has been installed on rooftops in Philadelphia, bridges in Amsterdam and uninhabited islands in Maine. Like navigational signs, Eggert’s artwork asks us to recognize where we are now as individuals and as a society, to identify where we want to be in the future — and to imagine the routes we can take to get there.

Quote of the talk: “Signs often help to orient us in the world by telling us where we are now and what’s happening in the present moment. But they can also help us zoom out, shift our perspective and get a sense of the bigger picture.”