We all have a story to tell. And in my work as curator of the TEDWomen conference, I’ve had the pleasure of providing a platform to some of the best stories and storytellers out there. Beyond their TED Talk, of course, many TEDWomen speakers are also accomplished authors — and if you liked them on the TED stage, odds are you will enjoy spending more time with them in the pages of their books.

All of the women and men listed here have given talks at TEDWomen, though some talks are related to their books and some aren’t. See what connects with you and enjoy your summer! 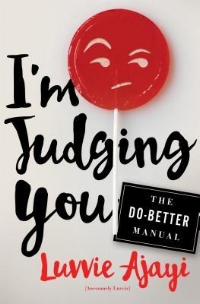 Luvvie Ajayi‘s 2017 TEDWomen talk has already amassed over 2.2 million views online! In it, she talks about how she wants to leave this world better than she found it and in order to do that, she says we all have to get more comfortable saying the sometimes uncomfortable things that need to be said. What’s great about Luvvie is that she delivers her commentary with a sly side eye that pokes fun at everyone, including herself.

In her book, I’m Judging You: The Do-Better Manual — written in the form of an Emily Post-type guidebook for modern manners — Luvvie doles out criticism and advice with equal amounts of wit, charm and humor that’s often laugh-out-loud funny. As Shonda Rhimes noted in her review, “This truth-riot of a book gives us everything from hilarious lectures on the bad behavior all around us to razor sharp essays on media and culture. With I’m Judging You, Luvvie brilliantly puts the world on notice that she is not here for your foolishness — or mine.” 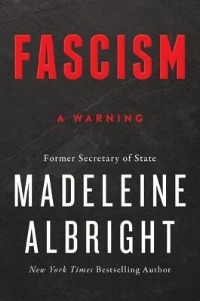 At the first TEDWomen in 2010, Madeleine Albright talked to me about what it was like to be a woman and a diplomat. In her new book, entitled Fascism: A Warning, the former secretary of state writes about the history of fascism and the clash that took place between two ideologies of governing: fascism and democracy. She argues that “fascism not only endured the 20th century, but now presents a more virulent threat to peace and justice than at any time since the end of World War II.”

“At a moment when the question ‘Is this how it begins?’ haunts Western democracies,” the Economist notes in its review, “[Albright] writes with rare authority.” 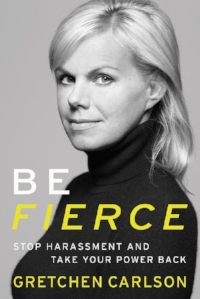 Sometimes a talk perfectly captures the zeitgeist, and that was the case with Gretchen Carlson last November at TEDWomen. At the time, the #MeToo movement founded in 2007 by Tarana Burke was seeing a huge surge online, thanks to signal-boosting from Alyssa Milano and more women with stories to share.

Carlson took to the stage to talk about her personal experience with sexual harassment at Fox News, her historic lawsuit and the lessons she’d learned and related in her just-released book, Be Fierce. In her talk, she identifies three specific things we can all do to create safer places to work. “We will no longer be underestimated, intimidated or set back,” Carlson says. “We will stand up and speak up and have our voices heard. We will be the women we were meant to be.” In her book, she writes in detail about how we can stop harassment and take our power back. 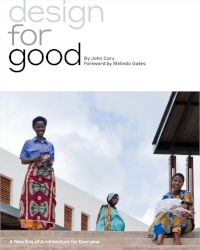 John Cary is an architect who thinks deeply about diversity in design — and how the field’s lack of diversity leads to thoughtless, compassionless spaces in the modern world. As he said in his 2017 TEDWomen talk, “well-designed spaces are not just a matter of taste or a questions of aesthetics. They literally shape our ideas about who we are in the world and what we deserve.”

For years, as the executive director of Public Architecture, John has advocated for the term “public interest design” to become part of the architect’s lexicon, in much the same way as it is in fields like law and health care. In his new book, Design for Good, John presents 20 building projects from around the world that exemplify how good design can improve communities, the environment, and the lives of the people who live with it. 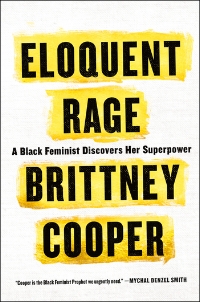 In her thought-provoking 2016 TEDWomen talk, professor Brittney Cooper examined racism through the lens of time — showing how moments of joy, connection and well-being had been lost to people of color because of delays in social progress.

Last summer, I recommended Brittney’s book on the lives and thoughts of intellectual Black women in history who had been left out of textbooks. And this year, Brittney is back with another book, one that is more personal and also very timely in this election year in which women are figuring out what a truly intersectional feminist movement looks like.

As my friend Jane Fonda wrote in a recent blog post, in order to build truly multi-racial coalitions, white people need to do the work to truly understand race and racism. For white feminists in particular, the work starts by listening to the perspectives of women of color. Brittney’s book, Eloquent Rage: A Black Feminist Discovers Her Superpower, offers just that opportunity. Brittney’s sharp observations from high school (at a predominantly white school), college (at Howard University) and as a 30-something professional make the political personal. As she told the Washington Post, “When we figure out politics at a personal level, then perhaps it wouldn’t be so hard to figure it out at the more structural level.” 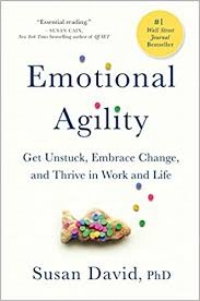 Susan David is a Harvard Medical School psychologist who studies how we process our emotions. In a deeply moving talk at TEDWomen 2017, Susan suggested that the way we deal with our emotions shapes everything that matters: our actions, careers, relationships, health and happiness. “I’m not anti-happiness. I like being happy. I’m a pretty happy person,” she says. “But when we push aside normal emotions to embrace false positivity, we lose our capacity to develop skills to deal with the world as it is, not as we wish it to be.”

In her book, Emotional Agility, Susan shares strategies for the radical acceptance of all of our emotions. How do we not let our self-doubts, failings, shame, fear, or anger hold us back? 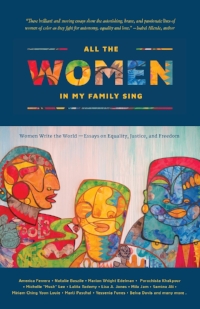 Dr. Musimbi Kanyoro is president and CEO of Global Fund for Women, one of the world’s leading publicly supported foundations for gender equality. In her TEDWomen talk last year, she introduced us to the Maragoli concept of “isirika” — a pragmatic way of life that embraces the mutual responsibility to care for one another — something she sees women practicing all over the world.

In All the Women in My Family Sing, Musimbi is one of 69 women of color who have contributed prose and poetry to this “moving anthology” that “illuminates the struggles, traditions, and life views of women at the dawn of the 21st century. The authors grapple with identity, belonging, self-esteem, and sexuality, among other topics.” Contributors range in age from 16 to 77 and represent African-American, Native American, Asian-American, Muslim, Cameroonian, Kenyan, Liberian, Mexican-American, Korean, Chinese-American and LGBTQI experiences. 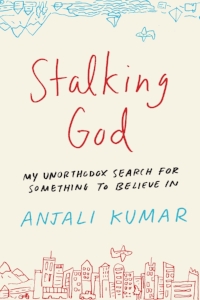 In her 2017 TEDWomen talk, author Anjali Kumar shared some of what she learned in researching her new book, Stalking God: My Unorthodox Search for Something to Believe In. A few years ago, Anjali — a pragmatic lawyer for Google who, like more than 56 million of her fellow Americans, describes herself as not religious — set off on a mission to find God.

Spoiler alert: She failed. But along the way, she learned a lot about spirituality, humanity and what binds us all together as human beings.

In her humorous and thoughtful book, Anjali writes about her search for answers to life’s most fundamental questions and finding a path to spirituality in our fragmented world. The good news is that we have a lot more in common than we might think. 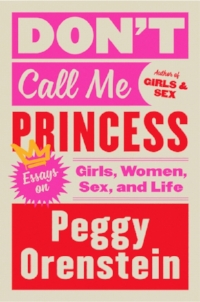 New York Times best-selling author Peggy Orenstein is out with a new collection of essays titled Don’t Call Me Princess: Girls, Women, Sex and Life. Peggy combines a unique blend of investigative reporting, personal revelation and unexpected humor in her many books, including Schoolgirls and the book that was the subject of her 2016 TEDWomen talk, Girls & Sex.

Don’t Call Me Princess “offers a crucial evaluation of where we stand today as women — in our work lives, sex lives, as mothers, as partners — illuminating both how far we’ve come and how far we still have to go.” Don’t miss it. 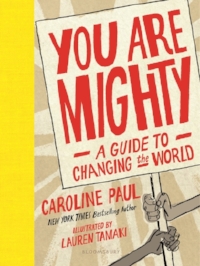 Caroline Paul began her remarkable career as the first female firefighter in San Francisco. She wrote about that in her first book, Fighting Fires. In the 20 years since, she’s written many more books, including her most recent, You Are Mighty: A Guide to Changing the World.

This well-timed book offers advice and inspiration to young activists. She writes about the experiences of young people — from famous kids like Malala Yousafzai and Claudette Colvin to everyday kids — who stood up for what they thought was right and made a difference in their communities. Paul offers loads of tactics for young people to use in their own activism — and proves you’re never too young to change the world. 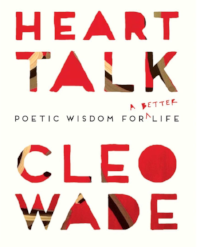 I first encountered Cleo Wade‘s delightful, heartfelt words of wisdom like most people, on Instagram. Cleo has over 350,000 followers on her popular feed that features short poems, bits of wisdom and pics. Cleo has been called the poet of her generation, everybody’s BFF and the millennial Oprah. In her new poetry collection, Heart Talk: Poetic Wisdom for a Better Life, the poet, artist and activist shares some of the Instagram notes she wrote “while sitting in her apartment, poems about loving, being and healing” and “the type of good ol’-fashioned heartfelt advice I would share with you if we were sitting in my home at my kitchen table.” 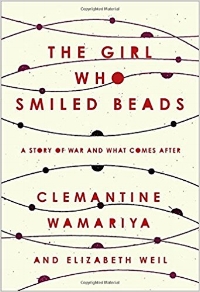 In 1994, the Rwandan Civil War forced six-year-old Clemantine Wamariya and her fifteen-year-old sister from their home in Kigali, leaving their parents and everything they knew behind. In her 2017 TEDWomen talk, Clemantine shared some of her experiences over the next six years growing up while living in refugee camps and migrating through seven African countries.

In her new memoir, The Girl Who Smiled Beads: A Story of War and What Comes After, Clemantine recounts her harrowing story of hunger, imprisonment, and not knowing whether her parents were alive or dead. At the age of 12, she moved to Chicago and was raised in part by an American family. It’s an incredible, poignant story and one that is so important during this time when many are denying the humanity of people who are victims of war and civil unrest. For her part, Clemantine remains hopeful. “There are a lot of great people everywhere,” she told the Washington Post. “And there are also a lot of not-so-great people. It’s all over the world. But when we stepped out of the airplane, we had people waiting for us — smiling, saying, ‘Welcome to America.’ People were happy. Many countries were not happy to have us. Right now there are people at the airport still holding those banners.”

I also want to mention that registration for TEDWomen 2018 is open now! Space is limited and I don’t want you to miss out. This year, TEDWomen will be held Nov. 28–30 in Palm Springs, California. The theme is Showing Up.

The time for silent acceptance of the status quo is over. Women around the world are taking matters into their own hands, showing up for each other and themselves to shape the future we all want to see.We’ll explore the many aspects of this year’s theme through curated TED Talks, community dinners and activities.