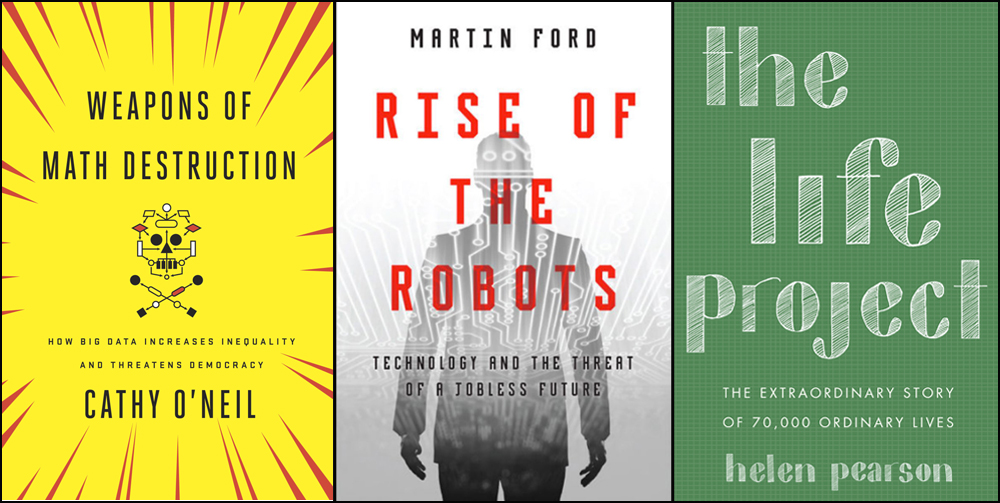 TED2017 begins on Monday in Vancouver, Canada, and will explore the theme “The Future You.” If the future you is anything like the future us, you are likely curled up in a big cushy chair right now, devouring the contents of a book that flips your thinking. Below, some reading suggestions from the speaker program. Read, enjoy and stay tuned to the TED Blog for beat-by-beat coverage of the conference.

Weapons of Math Destruction: How Big Data Increases Inequality and Threatens Democracy by Cathy O’Neil. The decisions that affect our lives are no longer made by humans — they’re made by algorithms. This might sound like a great way around bias and discrimination, but these things are often built right into our mathematical models. When it comes to college admissions, decisions on parole, applications to jobs and the affects of a bad credit score, O’Neil explores the unintended consequences of algorithms. (Read an excerpt.)

The Telomere Effect: A Revolutionary Approach to Living Younger, Healthier, Longer by Elizabeth Blackburn and Elissa Epel. Molecular biologist Elizabeth Blackburn received the Nobel Prize in Medicine for her discovery of telomeres, the ends of chromosomes that — like shoelace tips — keep our genetic information from fraying. Both telomeres and telomerase, an enzyme that restores worn-down telomeres, appear central to the aging process. This book looks at the research — then turns its attention to how our thoughts, bodies and social worlds affect us on the cellular level. (Read an excerpt.)

Not in God’s Name: Confronting Religious Violence by Rabbi Jonathan Sacks. For many around the world, religion is the core of who they are. But when strong belief flips into assumptions that other groups are wrong, violence sparks. Rabbi Jonathan Sacks seeks to detangle religion from hostility to others. He makes his case by reinterpreting the book of Genesis, key to all three Abrahamic faiths, and looking at how altruism to the other courses through this text. (Read an excerpt.)

Tools of Titans: The Tactics, Routines, and Habits of Billionaires, Icons, and World-Class Performers by Tim Ferriss. Ever wonder how journalist Malcolm Gladwell learned to ask questions or what investor Kevin Rose means by “gut investing”? Or how your workout stacks up to that of high-performance endurance athletes like Joe De Sena ? In this book, Ferriss obsessively details tips and lifehacks from the healthy, the wealthy and the wise — each one tested on himself. (Read an excerpt.)

The Village Effect: How Face-to-Face Contact Can Make Us Healthier, Happier, and Smarter by Susan Pinker. Our social interactions may be more and more mediated by technology, but it’s impossible to replace the power of in-person social bonds, says psychologist Susan Pinker. Face-to-face encounters don’t just make us feel good; they have a real biological impact on our bodies. In this book, she reveals how cultivating our social networks can help us live better lives.

Deep Thinking: Where Machine Intelligence Ends and Human Creativity Begins by Garry Kasparov. Newsweek described Garry Kasparov’s chess stand-off against supercomputer Deep Blue as, “The Brain’s Last Stand.” Nearly a decade later, Kasparov tells the story of that game and how disconcerted he was by this opponent who paid little attention to the psychological aspects of the game. He charts the development of intelligent machines — and reveals how he thinks his initial take was wrong. He predicts a bright future, with machines sparking human ingenuity.

Principles: Life and Work by Ray Dalio. Bridgewater Associates began in Ray Dalio’s New York apartment, and has grown into the largest hedge fund in the world. This happened, says Dalio, based on two simple principles: “radical truth” and “radical transparency.” In this e-book, he looks at how both principles can guide decision-making, for both individuals and organizations.

The Checklist Manifesto: How to Get Things Right by Atul Gawande. Several years back, the World Health Organization implemented “the biggest clinical invention in thirty years.” It was: a surgical checklist. Atul Gawande reveals how this shockingly simple technology dramatically lowers errors in medicine — and other fields too. In an unexpected ode, the Being Mortal author shows how the checklist might just be a way through the complexity of our world. (Watch his TED Talk, “How do we heal medicine?”)

Rise of the Robots: Technology and the Threat of a Jobless Future by Martin Ford. Automation has deeply affected those who work in blue collar industries. But we’re not far from white-collar industries shedding jobs too. The free market depends on consumers, so what will happen when demand plummets? In this book, Martin Ford dissects the problem — and points to ways forward. They will, however, require major paradigm shifts.

The Life Project: The Extraordinary Story of 70,000 Ordinary Lives by Helen Pearson. In 1946, a group of scientists set out to interview the mother of every baby born in the UK in the first week in March. This became the longest-running study of human development. Science journalist Helen Pearson tells the study’s story, and reveals how it shaped our understanding from the world, from documenting cycles of poverty to showing the effects of breastfeeding.

Hallelujah Anyway: Rediscovering Mercy by Anne Lamott. Few people can weave together smart life advice with blunt, honest humor like Anne Lamott. In her just-released book, she examines the benefits of extending mercy to others — and to ourselves. As she jumps from scripture to pop culture and back again, she concludes, “Kindness towards others … buys us a shot at a warm and generous heart.” (Read an excerpt.)

Irresistible: The Rise of Addictive Technology and the Business of Keeping Us Hooked by Adam Alter. Does the idea of checking your smartphone elicit salivation? Ever felt compelled to check Facebook at an inopportune moment, or gone on to watch just one more episode on Netflix? Psychology professor Adam Alter looks at the addictive nature of today’s products, and traces the research that goes into making them that way.

This Chair Rocks: A Manifesto Against Ageism by Ashton Applewhite. We all would like to get old. After all, the alternative is … not good. Yet, the assumptions we make about those over 65 aren’t kind. We view their lives as tinged with loss — of physical ability, mental capacity, even relevance. Ashton Applewhite punches through this, with a call to think of aging as a powerful process. (Read about her talk at the TEDNYC Idea Search.)

The Age of Em: Work, Love, and Life when Robots Rule the Earth by Robin Hanson. Economist Robin Hanson has a fascinating vision of what the future will look like. It begins with the ability to scan a human brain, then upload it to a machine — creating “emulations” or, in shorthand, “ems.” These ems will quickly displace human labor, he says. But what will they experience? What will their cities look like? How will they travel? Retire? Sleep? Hanson answers these questions and many more. (Read an excerpt.)

The Power of Meaning: Crafting a Life That Matters by Emily Esfahani Smith. Nearly a quarter of Americans say they don’t have “a strong sense of what makes their lives meaningful.” This, says Emily Esfahani Smith, is a crisis echoed in other wealthy nations too. She turns her attention to literature, psychology and sociology for insight — and finds unique answers in travels too. (Read an excerpt.)

Note: This post was updated with additional books on 4/24/17.

Tags for this story:
booksLive from TEDLive from TED2017TED2017
Follow TED
Subscribe to the TED Talks Daily newsletter.
Related Stories