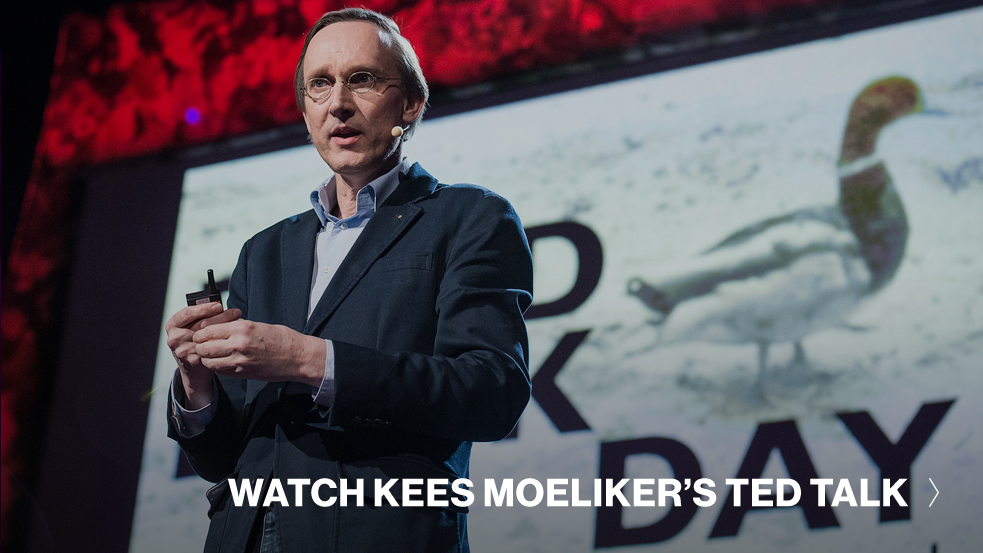 In 1995, Kees Moeliker heard a loud bang coming from the Natural History Museum Rotterdam’s new wing. He knew exactly what it was. A curator at the museum, Moeliker had gotten used to the sound of birds hitting the glass exterior of the new wing, and had even taken to stuffing the dead birds for the museum’s collection. But, as Moeliker explains in this humorous TED Talk, the duck that met its death on this particular day “changed his life.”

Just how the duck qualified as a life-changing event sounds like an April Fools’ Day joke. It is not.

Soon after the male mallard duck died, a live male duck from the same species approached it, mounted it, and — to put it in layperson’s terms — humped it for over an hour. Amazed, Moeliker did what any curious biologist would do: he grabbed his camera and his notebook, and recorded what happened. Moeliker described his bizarre observations six years later in a paper aptly titled “The first case of homosexual necrophilia in the mallard Anas platyrhynchos (Aves: Anatidae).”

In 2003, this work earned Moeliker the Ig Nobel Prize in Biology. A parody of the Nobel Prize, the Ig Nobels honor research and work that “first make[s] people laugh and then make[s] them think.” In other words, just because research sounds ridiculous doesn’t mean it has no merit. As Ig Nobel founder Marc Abrahams tells the TED Blog over email: “Science is the continuing quest to discover — and to not overlook — things beyond or outside what we expect. The truly unexpected is surprising, sometimes funny, and, who knows, might even turn out to be important.”

Even Moeliker’s dead duck research has a practical side. Each year on June 5, Moeliker and the victimized duck — which he naturally had stuffed — co-lead a public discussion on how to prevent birds from hitting windows, a major cause of bird death worldwide. As Moeliker shares in his talk, it could be that the mixed-up sexual behavior of animals points to something larger — that our continuous morphing of landscapes may have an affect animal behavior and species’ ability to thrive.

For a full list of past Ig Nobel winners, head to their website. Or read on for a few of our favorites…

Category: Entomology
Year: 1994
Winner: Robert A. Lopez “for his series of experiments in obtaining ear mites from cats, inserting them into his own ear, and carefully observing and analyzing the results.”
Why he did it: Sounds uncomfortable, and it was by all accounts. Still, as Marc Abrahams reports in The Guardian, Lopez’s itchy experiment helped him prove that Otodectes cynotis mites could infect humans, which he suspected was the cause of at least one rash in a young girl who liked cuddling her mite-ridden cats.

Category: Public Health
Year: 2009
Winners: Elena Bodnar, Raphael Lee, and Sandra Marijan “for inventing a brassiere that, in an emergency, can be quickly converted into a pair of protective face masks, one for the brassiere wearer and one to be given to some needy bystander.”
Why they did it: The concept for this invention may seem silly, and the drawings in the team’s patent don’t help, but during a biological or chemical terror attack you probably wouldn’t care.

Category: Safety Engineering
Year: 1998
Winner: Troy Hurtubise “for developing, and personally testing a suit of armor that is impervious to grizzly bears.”
Why he did it: Well, to see if he could survive a grizzly attack. But, according to Wikipedia, the suit may also have applications in riots, explosions and other dangerous situations in which you’d want protection.

Category: Peace
Year: 2000
Winner: The British Royal Navy “for ordering its sailors to stop using live cannon shells, and to instead just shout “Bang!”
Why they did it: According to the BBC, the Navy decided to forego live ammunition for the childlike verbal “bangs” after the government drastically cut military budgets.

Category: Biology
Year: 2002
Winners: N. Bubier, Charles Paxton, Phil Bowers and D. Charles Deeming “for their report ‘Courtship Behaviour of Ostriches Towards Humans Under Farming Conditions in Britain.’”
Why they did it: According to the authors, an increase in ostrich farms and a lack of knowledge on how they breed in captivity spurred the research. Anecdotal evidence showed the birds got frisky whenever people were nearby, so the researchers decided to confirm whether it was true. It was. The authors concluded: “Courtship behaviour towards humans may be important in the reproductive success of ostriches in a farming environment.”

Category: Engineering
Year: 2010
Winners: Karina Acevedo-Whitehouse and Agnes Rocha-Gosselin “for perfecting a method to collect whale snot using a remote-control helicopter.”
Why they did it: Being a whale doctor isn’t easy, especially when your patient weighs multiple tons and is swimming in the ocean. One way to monitor health is to check the microbes living in and on the whale to see if they may be causing disease. As these winners have shown, it’s possible to collect at least some of those whale microbes with the marvels of modern technology.

Category: Physics
Year: 2003
Winners: Jack Harvey, John Culvenor, Warren Payne, Steve Cowley, Michael Lawrance, David Stuart, and Robyn Williams “for their irresistible report ‘An Analysis of the Forces Required to Drag Sheep over Various Surfaces.’”
Why they did it: As this Abrahams Q&A with Wired explains, the research took place in Australia, where sheep shearing is a major industry. Dragging the sheep to the equipment is difficult and dangerous and the scientists researched various floor configurations and materials to see what which surfaces made the job easiest.