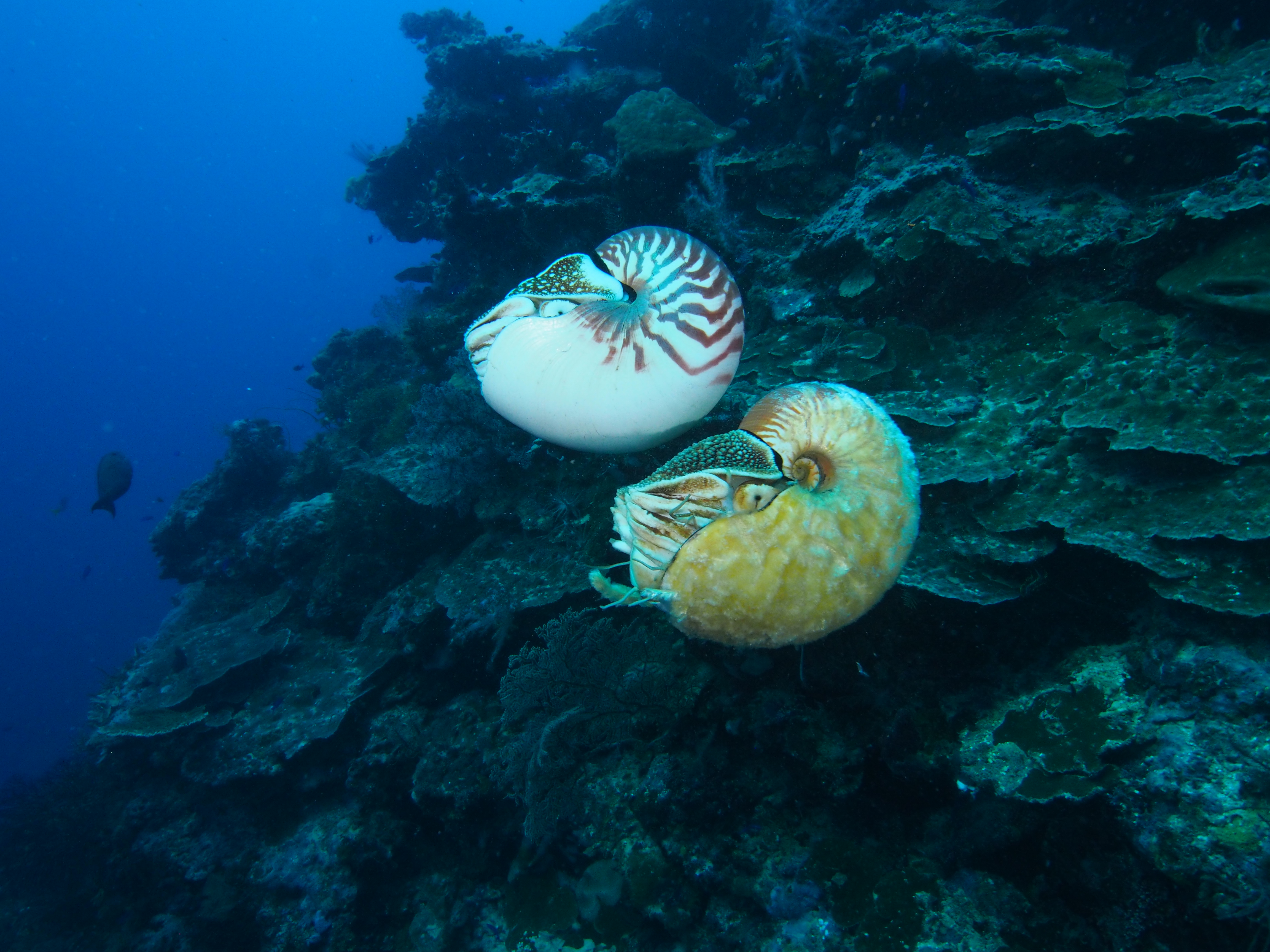 The nautilus (top) inspired Jules Verne, and is famous for its smooth, spiraling shell. The allonautilus (bottom) on the other hand? This slimy, hairy, yellow species hasn’t been seen in 30 years. TED speaker Peter Ward found it again and captured it on film, alongside its more common counterpart. Photo: Courtesy of Peter Ward

The TED community has news to share. Read on for highlights.

The rarest animal on Earth, spotted once again. Peter Ward hadn’t seen his “old friend,” the Allonautilus scrobiculatus, since 1984. But he recognized its hairy, slimy, golden shell instantly. Ward wrote about his rediscovery of this creature — alongside its more-common relative, the nautilus, off the coast of Papua New Guinea — for National Geographic’s Explorers Journal. Ward considers both the nautilus and allonautilus as “a living fossil” because they originated about 530 million years ago and survived the mass extinctions that killed off so many other species. The biggest threat to them now? Humans. Specifically, shell hunters. “It is the very popularity of their beautiful, iconic, spiraled, and internally chambered shells that threatens them most — more than meteors from space, atmosphere-polluting global volcanoes, or even long-enduring ice ages ever did,” said Ward. He added in a follow-up interview, “This could be the rarest animal in the world. We need to know if allonautilus is anywhere else.” (Watch Peter’s TED Talk, “A theory of Earth’s mass extinctions.”)

Barry Schwartz flips the script on why we work. No, we don’t go to work only for the paycheck. Psychologist Barry Schwartz shot down this widespread idea in The New York Times’ Sunday Review. “We want work that is challenging and engaging, that enables us to exercise some discretion and control over what we do, and that provides us opportunities to learn and grow,” he wrote. “We want to work with colleagues we respect and with supervisors who respect us. Most of all, we want work that is meaningful.” The essay, which has gotten hundreds of comments so far, is an excerpt from Schwartz’s TED Book, available now. And watch for his latest TED Talk, premiering September 8, 2015. (Order Barry’s book, Why We Work.)

A vomiting machine to stop the spread of sickness. It may sound like an awful science fair project, but it might just keep you healthy. Environmental engineer Francis de los Reyes created a machine that throws up for a study published in PLOS ONE in August. Why, you ask? To investigate how norovirus — often (inaccurately) called the “stomach flu” — spreads from person to person. Going in, the scientists had some hunches. “We have suspected aerosolization of virus in vomiting for probably twenty years, but we never provided any kind of laboratory-based proof of it,” co-author Lee-Ann Jaykus told Time.com. So with the help of Reyes’ machine — and, apparently, Jell-O instant pudding — they found that about 0.02 percent of the virus is in fact transmitted into the air. So, they warn, if you see someone throw up, walk away if you can. (Watch Francis’ TED Talk, “Sanitation is a basic human right.”)

.
Poetry transcends prison walls.
Standing alone in a classroom lit by the morning sun, poet Clint Smith prepares a lesson on a chalkboard. In a video and essay for Upworthy (sponsored by the Open Society Foundations), he reflects on his experience teaching creative writing at the Bay State Correctional Center in Massachusetts — and how it made him confront his biases about inmates. “Before class even begins, they chat eagerly with one another about what they’ve been reading,” he wrote. “They discuss the nuances of liberation theology, the value of feminist work and whether a particular poem … would be better as a sonnet or sestina.” They have true intellectual curiosity, Smith says, and writing lets them express themselves. “It gives them the opportunity to push back against these pejorative ideas and notions around who they are — and to do it for themselves, in a way that is reaffirming of their own humanity.” (Watch Clint’s TED Talk, “How to raise a black son in America.”)

The Daily Show gets a digital edge. Since 1996, America has watched The Daily Show to laugh at and think about the nation’s nonstop political saga. As the show readies for new host Trevor Noah, Baratunde Thurston has signed on to supervise digital content. “There’s more to what The Daily Show can make than what people have seen,” he told The New York Times last week. We know he’ll bring the same cultivated wit he showed in his wrap-up of the TED2015 conference, and that he’ll use as he hosts TED Talks Live on Broadway this November. (Read Baratunde’s essay on the TED Blog, “Let’s get more STEM teachers in the classroom.”)

A film for young women in Afghanistan. The novel The Breadwinner is headed to the screen — with Angelina Jolie Pitt as executive producer. And the screenplay will be written by TED Fellow Anita Doron. The book tells the story of a girl in Afghanistan who must pose as a boy in order to support her family, and will be an interesting follow-up to Doron’s last film, The Lesser Blessed, about a Canadian teen pulled between native roots and the modern world. The plot reminds us of the personal story Shabana Basij-Rasikh tells in her TED Talk, of dressing as a boy to attend school under Taliban rule. (Watch Shabana’s TED Talk, “Dare to educate Afghan girls,” and read a TED Blog Q&A with Anita.)