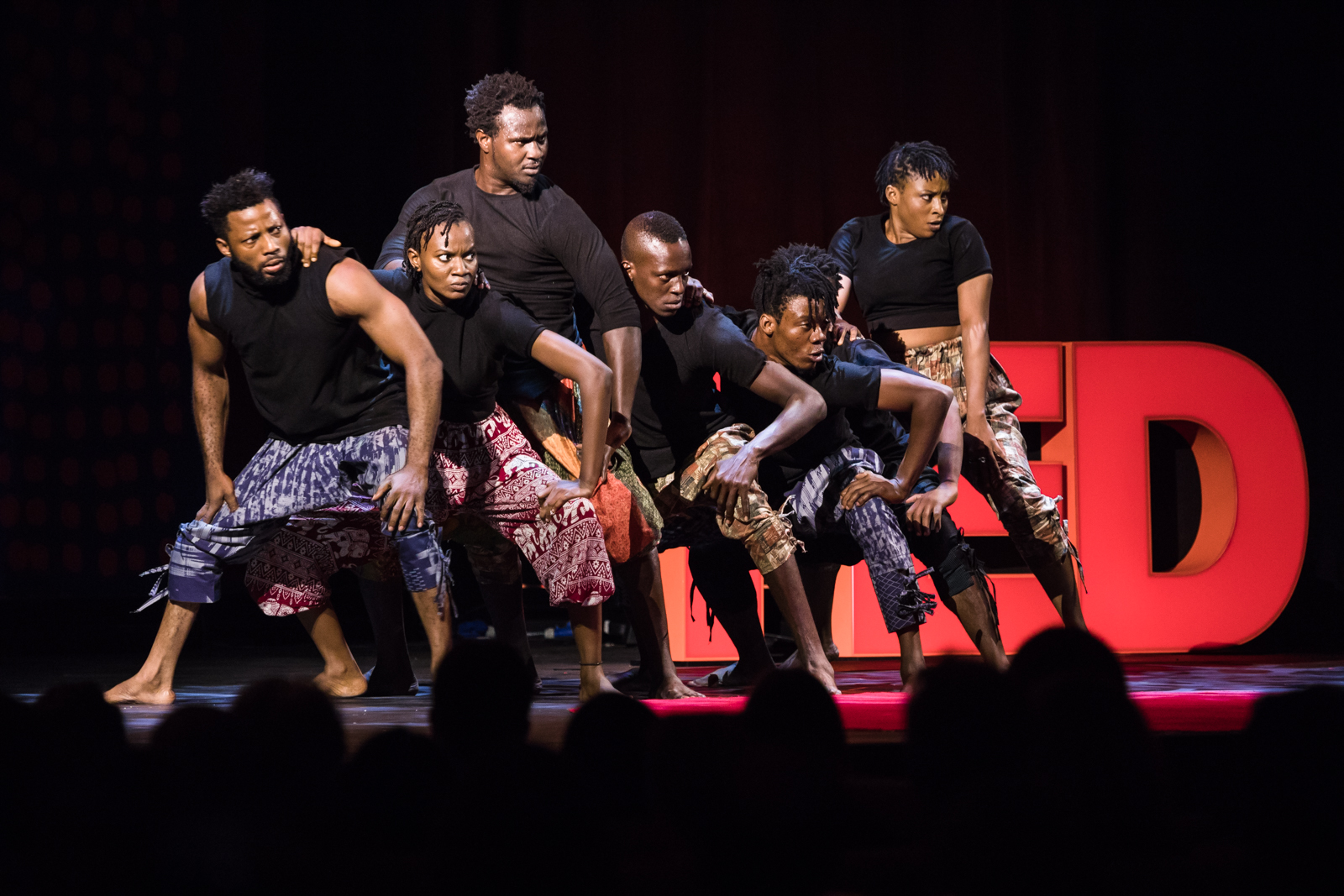 The stage is set. The lights are on. The audience of more than 600 people who have traveled from all over the world to be inspired is ready. And ready or not, the speakers are thrust onto the stage, one by one.

This is the first session of TEDGlobal 2017, themed “a new map,” a phrase that suggests that in these first talks, we will catch a glimpse of what the future of Africa might look like. In the present, however, perhaps as some organizational double entendre, this first set of speakers will also set the tone for the rest of the conference. A lot is resting on them, and while I can’t relate to their anxiety, I can empathize.

But I needn’t have worried — the opening was as rousing and as moving as any opening should be.

Qudus Onikeku and The QTribe opens the session with a brief but incredibly energetic production titled “RainMakers,” a performance Qudus would later tell me is the shortest he and his team have ever enacted. It is just as well, because those four short minutes left the audience wanting more, and they’ll get it. Qudus will returning to the stage before the conference is out.

Dr. Augustus Casely-Hayford debunks the nonsense notion that Africa has no history, with an African history lesson that dates back to before the 12th century. Back to Great Zimbabwe, an ancient city whose mysterious origins and extremely advanced architecture continue to confound archeologists. Back to when Mansa Musa, whose wealth was so great that his caravans stretched out as far as the eyes could see, ruled the Mali empire and constructed schools and libraries — most notably the libraries of Timbuktu that are still home to hundreds of thousands of medieval texts.

Eighteen minutes is hardly enough time to capture the history of any culture, much less that of a continent with a story as deep as Africa’s. Much of what Dr. Gus speaks of isn’t taught in schools in the first place … but that is a conversation for another day.

Zachariah Mampilly invites us to consider how African political activists, especially the younger generation, engage their governments through protests. Protest democracy, as he describes it, has taken place in waves through Africa’s history, and we are currently living through one that began in 2005. It’s toppled governments (for instance, in Tunisia and Egypt) and prevented presidents from claiming third terms in Senegal, Burkina Faso and Malawi. As a way to shape a people’s political future, protests can be messy, but they are more effective than most believe.

George Steinmetz shows us breathtaking pictures of what Africa looks like from the air, an idea he got after he dropped out of Stanford to hitchhike across Africa in what he described as a graduate course in ecological ethnography. These are big words that mostly consisted of hitching free rides on top of trains because he couldn’t afford to ride inside them. But as he crossed the landscape, he wondered how cool it would be to take pictures of the rich landscape if he were flying through the air like a bird.

Twenty years later, he convinced National Geographic to send him back to Africa to take pictures from the “slowest, lightest aircraft in the world.” To the obvious question of why you would fly in an unsafe-looking motorized glider instead of taking pictures from a plane, or even with a drone, he says: “Drones aren’t really made for exploration.” They are limited by battery life and the view through a five-inch screen. Planes, meanwhile, fly too high and too fast. His motorized glider flies at 30 miles per hour for two hours on a 10-liter tank of fuel and lets him fly at heights of between 200 and 500 feet — slow and high enough to capture amazing pictures that register on a human scale.

As Steinmetz has discovered, surprising historical ecological, and sociopolitical patterns emerge when you are looking down at the world from a flying lawn chair. 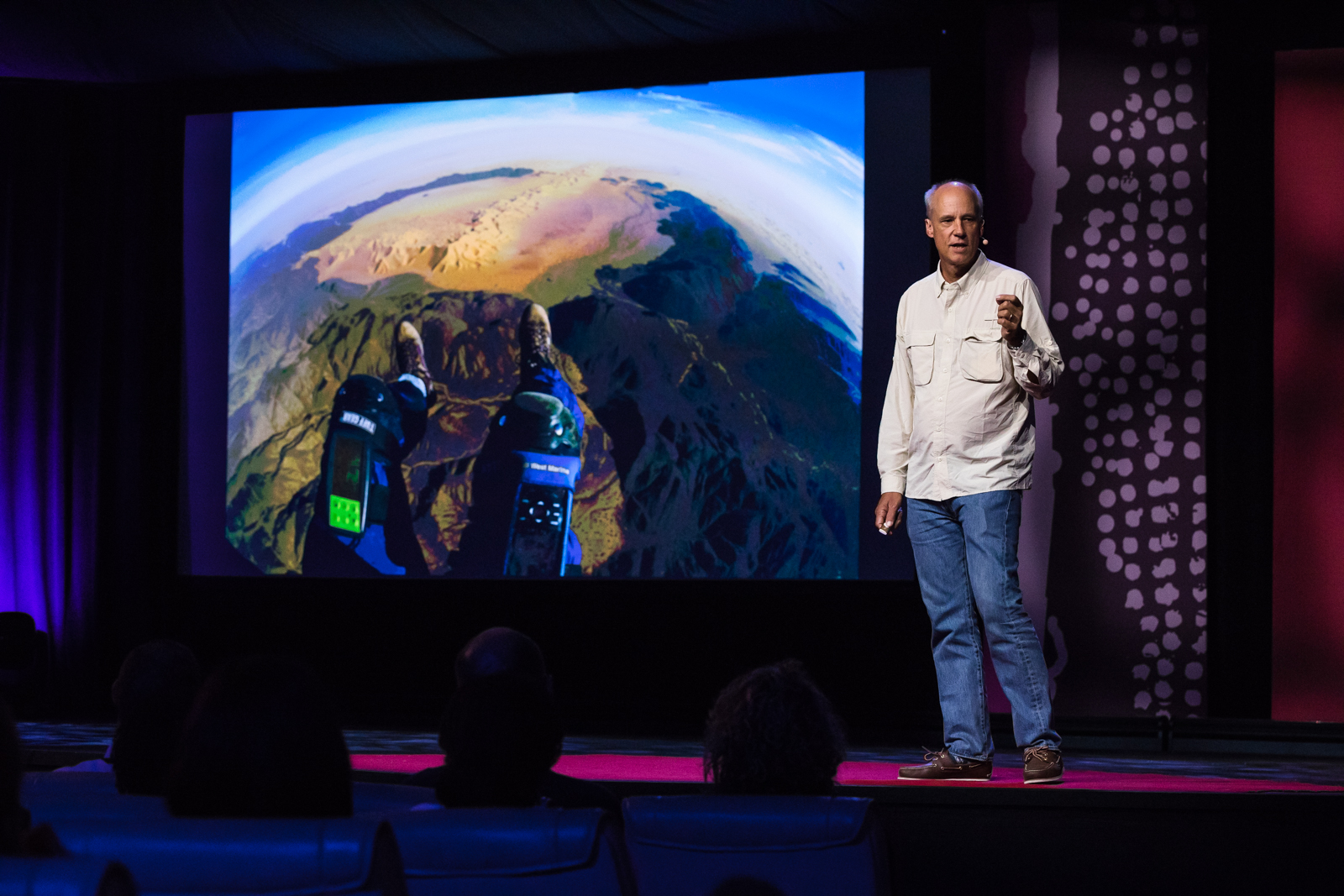 George Steinmetz takes breathtaking images of Africa from the air, shooting from what he calls a “flying lawn chair” that puts him about 200–500 feet off the ground. See more of his aerial images here. Photo: Bret Hartman / TED.

Oshiorenoya Agabi took us out of George’s skies and right down to the bleeding edge of neuroscience. While computers are better than humans will ever be at complex mathematical equations, there’s at least a few cognitive functions where humans are much, much better: training a computer to recognize smells would require colossal amounts of computational power and energy.

Osh is bypassing these computational and energy challenges by reverse-engineering biology, which already accomplishes this function with an infinitesimal fraction of the power it would take a silicon-based processor. “Biology is technology. Bio is tech,” he says. “Our deep learning networks are all copying the brain.”

Osh’s team are embedding living neurons in microchips and have found ways to keep them alive for up to two months. The resulting device is the Koniku Kore, an amalgam of living neurons and silicon, with olfactory capabilities — basically sensors that can detect and recognise smells. Among the possible applications: bomb detection in airports. Or imagine if a sensor in a hospital could sense markers of a disease in the air molecules that a patient expels, to detect an illness long before it becomes terminal.

If you think it sounds a little crazy and Elon Musk-y, you aren’t alone. (TEDGlobal co-host Chris Anderson, in a Q&A onstage afterward, asks him: How much of this is, you know, real?) And it gets better. Today, the Koniku Kore is an olfactory sensor. But eventually, Agabi wants to build a cognitive device — big words for a brain.

Touria El Glaoui grew up surrounded by African art and would eventually become a curator. In her talk, she shares a collection of contemporary art that tells powerful stories of African identity and grapples with the complexity of African history. In her collection you’ll find Omar Victor Diop, a Senegalese artist, who created his Project Diaspora series to draw attention to how Africans are represented in Western and Asian art history, highlighting individuals who became influential in their day, but were eventually denied a place in history. The series Kesh Angels by Hassan Hajjaj, a Moroccan artist, challenges the stereotypical representation of Muslim women. And finally, one painting: Kudzanai-Violet Hwami’s Ego in Red Socks. “What I love about Hwami’s work,” Touria says, “is her futuristic visualization of African life, where fantastic imaginings are punctuated with socio-political concerns of the present.” 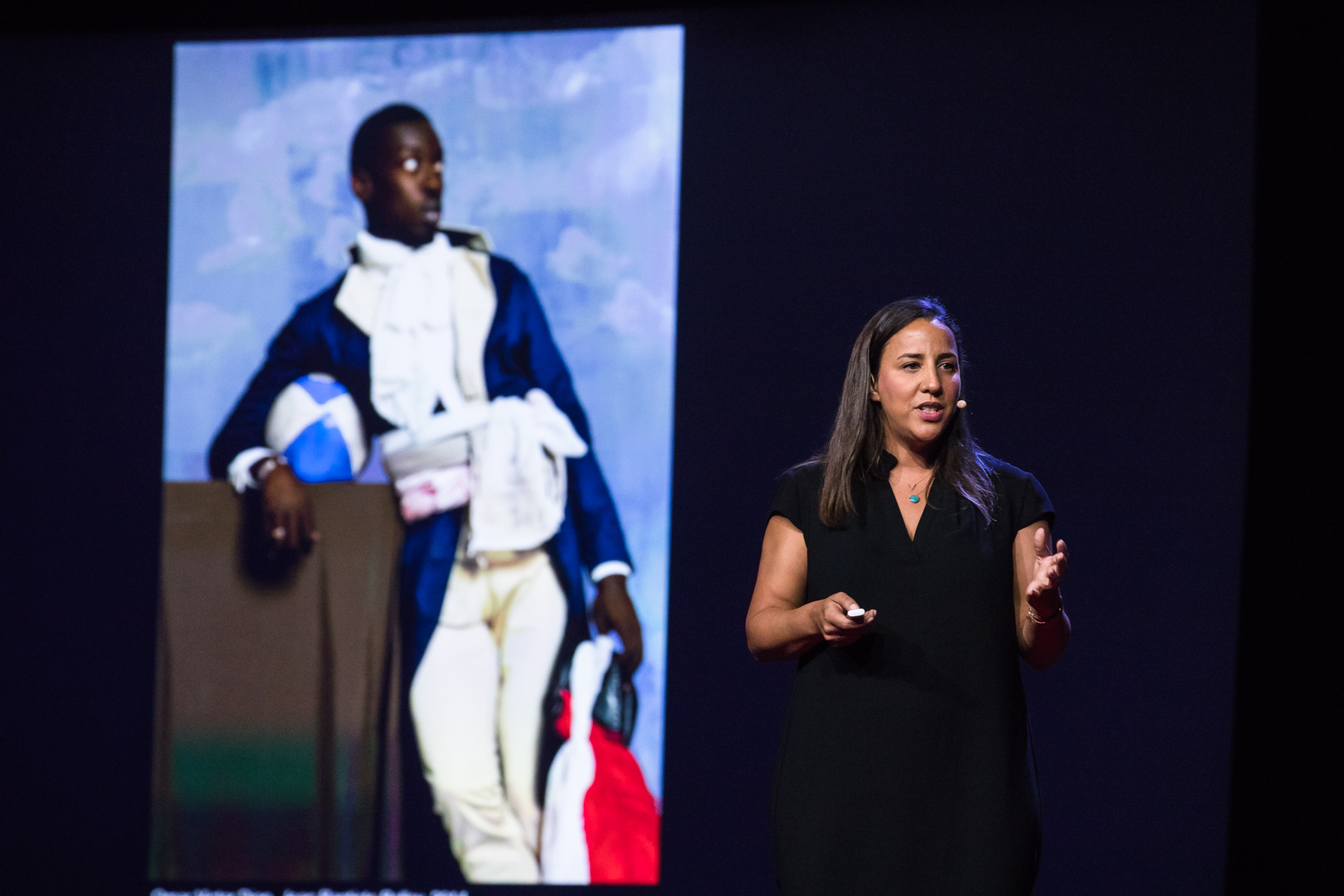 Art curator Touria El Glaoui unpacks a self-portrait by Omar Victor Diop, a re-staging of Girodet’s portrait of Jean Baptiste Belley, a native of Senegal and a former slave from the French-Caribbean colony of St. Domingue (Haiti) who represented the colony in the French government after the revolution. She asks: Why has this important historical figure, and other Africans, faded from view? Photo: Bret Hartman / TED.

Nnedi Okorafor asks: “What if an African girl from a traditional family in a part of future Africa is accepted into the finest university in galaxy, planets away? What if she decides to go?”

The answer is in Nnedi’s Binti series, a trilogy that is the perfect gateway drug to Afrofuturism. Afrofuturism looks a lot like science fiction, but Nnedi argues it’s different from sci-fi because its evolutionary roots are different.

“I was inspired to write this story, not because I was following a line of classic space opera narratives, but because of blood that runs deep, family, cultural conflicts and the need to see an African girl leave the planet on her own terms. My science fiction has different ancestors, African ones.”

Day one done. Seven ideas delivered. 41 more speakers to go. We don’t quite have the technology to replicate the feelings, emotions and brainwaves for anyone who is isn’t the room. But we will do our best to capture the experience in text and images. Look out for more session recaps, one-on-one interviews and other great content that we’ll be pushing out over the next few days.