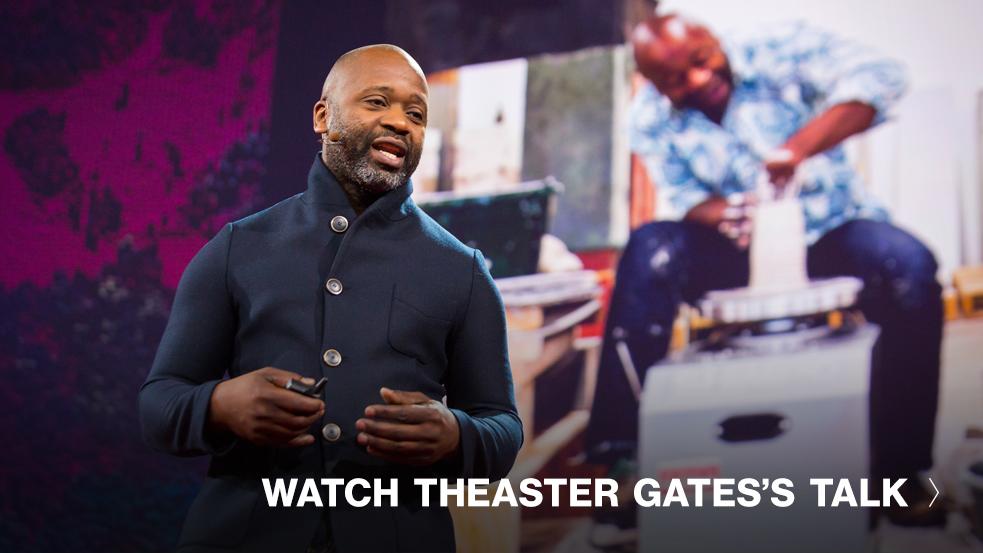 Abandoned school turned maker space. Theaster Gates turns Chicago’s abandoned buildings into thriving hubs for art and education. His next project? Turning an old elementary school into a maker space. Gates heads Place Lab, a think tank that fuses the brainpower of urban planners, architects, artists and other diverse professionals to create “culture-led neighborhood transformation”. Gates and his Place Lab team will soon turn this school into a collaborative space for job training, education and design fabrication, as well a place for youth to explore culture and identity. (Watch Theaster’s TED Talk)

“Be yourself” is bad advice. An alternative: Before taking the TED stage for the first time, Adam Grant – nervous and eager to impress — asked his colleagues and friends for advice and they all said the same thing: be yourself. Turns out, Grant says, that was lousy advice. Our world is obsessed with authenticity, but as Grant outlines in The New York Times, those who take their behavioral cues from the outside environment go further in their careers, are more likely to try again after failure, and more likely to be of service to others. Ultimately, Grant suggests, sincerity in striving to be the best version of yourself, regardless of what’s on the inside, has a higher payoff: “As an introvert, I started my career terrified of public speaking so my authentic self wouldn’t have been giving a TED Talk in the first place. But being passionate about sharing knowledge…I decided to be the person I claimed to be, one who is comfortable in the spotlight.” (Watch Adam’s TED Talk)

New action on gun control. Awareness alone is not enough — action is what makes change. Over 2,2000 supporters of The Brady Campaign, Dan Gross’ organization to reduce gun deaths and injuries, called the office of Senator Chuck Schumer, asking him to introduce Brady Bill 2.0. Spurred by the calls, Senator Schumer introduced the bill mere hours later on May 16.  A followup to previous legislation, Brady Bill 2.0 will expand universal background checks on gun sales. This mobilizing achievement is the latest of The Brady Campaign’s tremendous effort, read more here. (Watch Dan’s TED Talk)

An advocate for North Korean women. Hyenseo Lee’s dream to work with the UN or an NGO on human rights issues for North Korean refugees is set to become reality with a slight twist: the NGO is her own. Lee is in the process of setting up North Korean Women, an NGO that aims to help North Korean women living in North Korea, South Korea, China, and around the world.“Life as a North Korean defector is really painful. Women are sold as sex slaves to human traffickers or Chinese men. They are being tortured, are suffering, with no payment, but the sad thing is that even a 20- or 30-year-old North Korean woman being a sex slave or being sold as human merchandise to an old Chinese farmer prefers that situation to being repatriated to North Korea. It’s another hell to live in North Korea,” says Lee. (Watch Hyeonseo’s TED Talk)

A funny way to fight racism. Instead of just diversity panels and awkward trust falls, maybe comedy is the key to fighting racism. Negin Farsad, an Iranian-American Muslim comedian and filmmaker (and TED Fellow), wants to create tolerance through laughter. In fact, she’s been doing this for years, as shown in her documentary The Muslims Are Coming!. Last month, Farsad released a memoir, How to Make White People Laugh, chronicling her experience as an Iranian-American Muslim post-9/11 with blunt honesty and unabashed humor.

Diets: a losing battle. “If diets worked, we’d all be thin by now. Instead, we have enlisted hundreds of millions of people into a war we can’t win.” A frank, perhaps uncomfortable truth that Sandra Aamodt outlines in in her new book Why Diets Make Us Fat, coming out June 7. But with this knowledge comes hope for a better, more scientific approach to long term weight loss and an overall healthier lifestyle. (Watch Sandra’s TED Talk)

A better way to predict the future. We’ve all heard them, predictions about the future that are wildly off: hoverboards, an entire meal in a pill, and flying cars are just a few that come to mind. But in grappling with the future, Kevin Kelly’s The Inevitable (out June 7) takes a different tack, avoiding speculation about specific technologies that may emerge because “the specifics, the products, the particular institutions are completely unpredictable.” Instead, he breaks down the future of technology into 12 major trends, arguing that these trends are not only already happening, but that they will drive inevitable changes in the next 30 years. (Watch Kevin’s TED Talk)