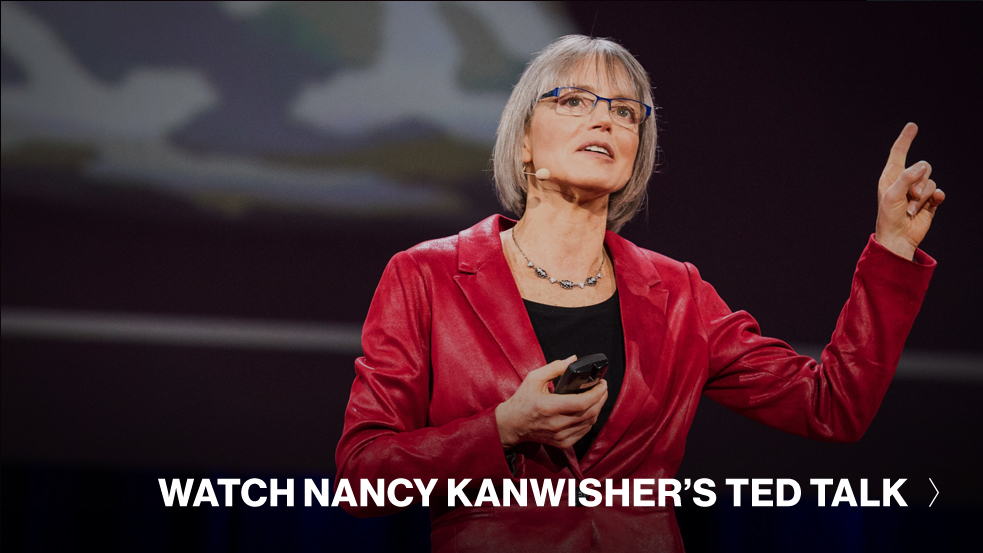 This week as usual, the TED community has lots of news to share. From an unusual neuroscience explainer to a heart-pounding documentary to a book cover reveal, some newsy highlights below.

Shave your head for science? Neuroscientist Nancy Kanwisher has created a very cool video to explain where the regions of the brain actually are under the scalp. In it, she shaves her head — on camera. As a colleague draws on her newly bald head with a marker, Kanwisher shares some fascinating facts about the cortex — the outer part of the brain that we use to hear, see, move and think. “The cortex is about the size and thickness of a large pizza,” she says. “Now to fit that pizza inside the skull, you have to fold it up. That’s why brains are all wrinkly.” (Watch Nancy’s TED Talk, “A neural portrait of the human mind.”)

A TEDx stage, in a museum. At MoMA PS1 in Queens, you can see the stage that Berlin-based artist Simon Denny designed for TEDxVaduz at his first major solo exhibit in the United States, “The Innovator’s Dilemma.” The floor of this stage features a glossy rendering of the country of Liechtenstein, imagined as a tropical island — a commentary on the fact that the country is often used as a tax haven. The background of the stage features a fluid collection of words, pulled from key moments in talks given at the TEDx event he organized in 2013. The piece is representative of Denny’s work, which as the exhibit website explains, “often refers to the psychology and abstract language of the new media economy, invoking ‘clouds’ of big data and the constant pressure to ‘update’ our lives.”

A dancer evolves. TED Fellow Camille A. Brown uses dance to explore the experience of black women in America — and she just received the 2015 Doris Duke Artist Award for her growing body of work. “I am constantly challenging myself to show my evolution as a choreographer and person in my work. It’s very easy to rest on your strengths,” she tells the award’s website. “But feeling uncomfortable and incredibly unsafe … I am stronger for those experiences.” (Read about Camille and the other TED2015 Fellows.)

War through the eyes of an Afghan soldier. In the US, headlines about the war in Afghanistan focus on American troops. But the new documentary from TED Fellow Saeed Taji Farouky and Michael McEvoy, Tell Spring Not To Come This Year, intimately explores the everyday lives of Afghan troops fighting against the Taliban. The film gives a human face to these Afghan soldiers, showing their hopes and fears, dreams and ambitions. As one says in the preview below, “Pray that we may be capable of defending our nation, our land … that we may fight oppression, fight hopelessness.” (Read about Saeed’s feature film, The Runner.)

.
A wildlife expedition — on your computer
. “Wilderness cannot be restored or recreated — only destroyed,” says TED Fellow and National Geographic Emerging Explorer Steve Boyes in a newly posted INK Talk. In it, he describes his 18-day expedition in Botswana’s Okavango Delta, stressing how this pristine area that’s teeming with a diversity of life is being threatened. With the help of conservation technologists and data artists, Boyes created IntoTheOkavango.org, an interactive platform that offers real-time data on the health of the delta. (Read more about Steve Boyes’ work.)

The birth of the death certificate. Death certificates can be tricky, as the cause of death isn’t always clear, but they offer invaluable data on where and how we die. In this week’s issue of The New Yorker, Kathryn Schulz writes about the historical events that gave rise to the death certificate. Before modern medicine, death was often personified as an outside force — like the Angel of Death or the Yama in Hinduism — that inflicted its fate upon a passive victim. But after the Black Death, people began to systematically quantify death. “The flip side of democracy is bureaucracy: if everyone counts, than everyone must be counted,” writes Schulz. (Watch Kathryn’s TED Talk, “Don’t regret regret.”)

The danger of implicit bias. James A. White Sr. appeared on CNN International last week, following up on his TED Talk about the complexities of being a black male in the United States. In the interview, he elaborates on how he tells his grandsons to interact with the police, and shares how he is working with law enforcement officers to help them counteract the “implicit bias” many might not even realize they have — but that we know can have lethal consequences. (Watch James’ talk, “The little problem I had renting a house.”)

A clear and present book cover. Amy Cuddy shared the cover of her upcoming book, Presence, on Twitter yesterday. The book, which focuses on how to bring the best of yourself to life’s challenges, will be out in November. In the meantime, it’s interesting to note that the blurb across the bottom of the bright yellow cover is from another TED speaker, Susan Cain. We love that Cain calls Cuddy the “high priestess of self-confidence for the self-doubting.” (Watch Amy’s TED Talk, “Your body language shapes who you are,” and Susan’s, “The power of introverts.”) 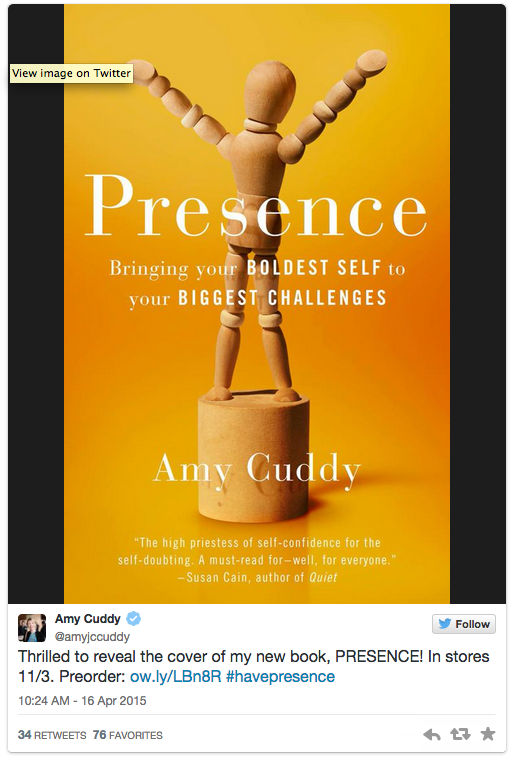