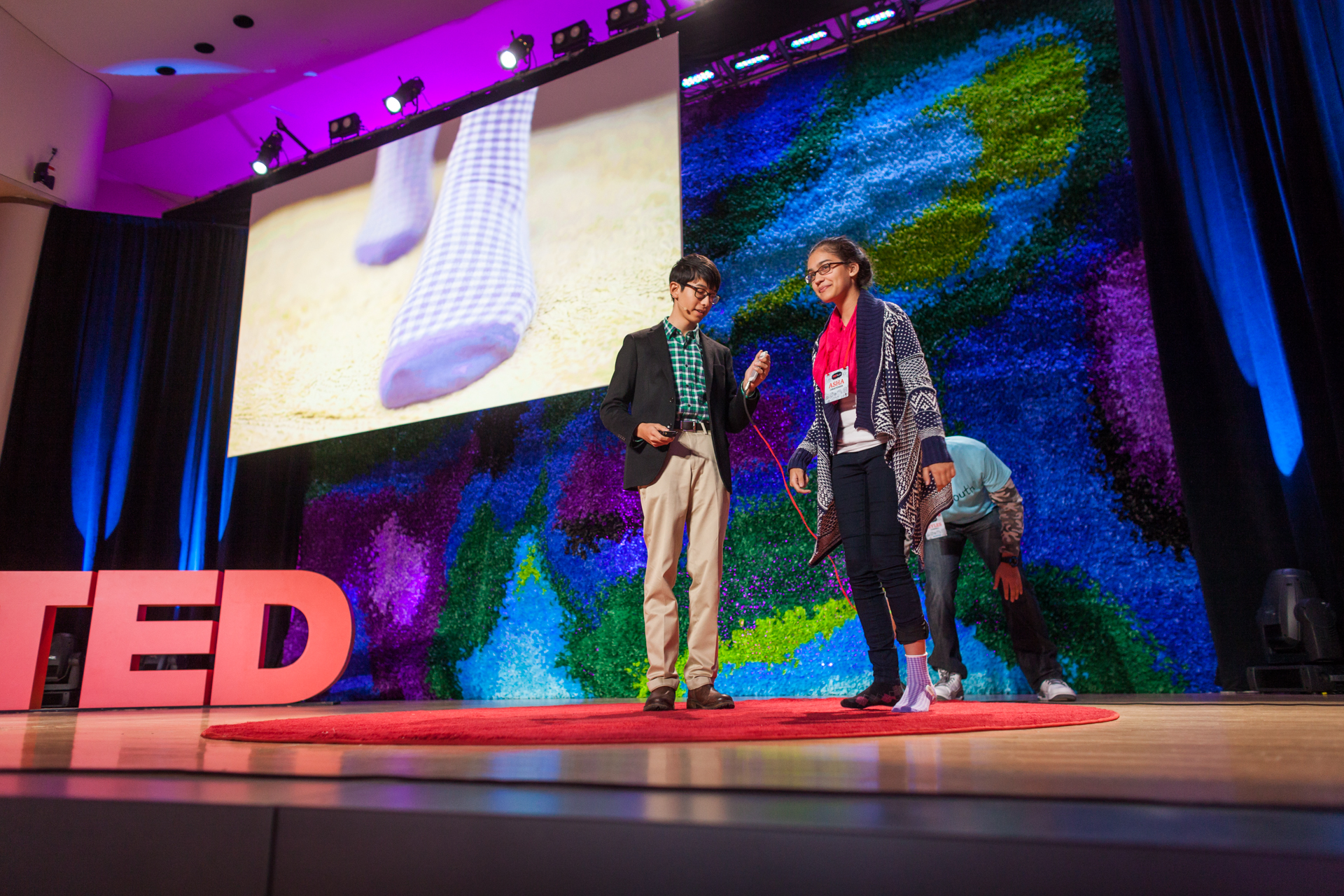 Session 2 of TEDYouth 2014 offered talks to rouse the spirit and a few to gross you out. Below, recaps of these fascinating talks.

Robots with rhythm. Nothing adds to a musical crescendo more than a skillful improvisation. Gil Weinberg, an engineer and musician from Georgia Tech, brings this creativity to new heights. He builds musically intelligent robots that can improvise along with humans. This technology isn’t just about amusing audiences—Weinberg shows us robots that play rhythms impossible for humans. “We could be musical cyborgs,” he says, showing a clip of a drummer with a prosthetic limb who plays at incredible speed.

A talk with a “sock model.” When Kenneth Shinozuka’s grandfather started to show symptoms of Alzheimer’s, there was one fact that especially troubled his family: the fact that he often wandered at night. His aunt couldn’t sleep, she was so worried about him getting lost. So Shinozuka had an idea: he created a heel-attaching sensor that would send an audible alert if his grandfather so much as placed a foot on the floor. He talks us through the challenges of designing such a thing, and reveals that in its first year of use, it detected 900 cases of his grandfather getting out of bed. It’s one small, smart solution for a growing problem. “As the number of people diagnosed with Alzheimer’s triples by the year 2050, caring for them will become an overwhelming societal challenge,” he says.

Mucus mania. Biochemist Katharine Ribbeck loves mucus, more commonly known as snot. Despite its gross reputation, mucus plays an important role in protecting our cells from infection-causing pathogens, she says. Our cells are coated in mucus to preserve moisture, help us digest food, and neutralize the toxins secreted by harmful microbes. In fact, our bodies produce a gallon of mucus a day in all. Ribbeck is researching the potential of synthetic mucus, called “mucin,” which could be used in eye drops, nose sprays, skin cream, food and more.

A culture of compost. Pashon Murray went to General Motors and Ford with an unusual request: would you give me your food waste? A Detroit native who you might know from this brilliant spoof of a Cadillac commercial, Murray wanted their food waste to help start a composting movement in her city. She takes food waste from local companies and manure from the local zoo and uses it to turn forgotten tracts of land into thriving gardens. “Detroit gets a lot of news coverage that talks about the negative things—the vacant land, dilapidated properties, buildings that have been pretty much abandoned,” says Murray. “That exists. But to me, Detroit is a gem.” 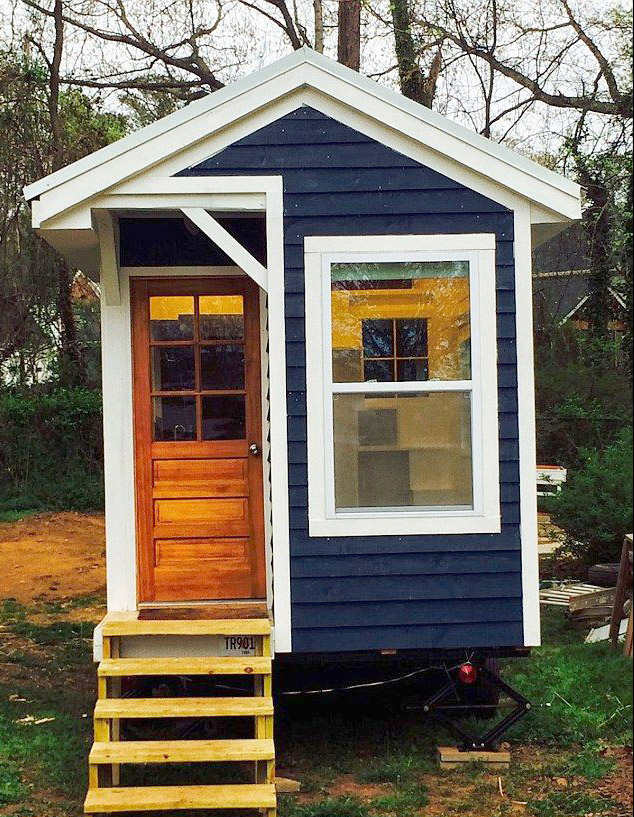 A tiny house, and a lesson in self-sufficiency. Teenage crafter Sicily Kolbeck built a 128-square-foot house in less than a year. With the help of instructional YouTube videos on everything from plumbing to installing electricity (plus a whole lot of guess work), the 14-year-old completed her tiny house in April of this year. The project was life changing: she went from a self-conscious introvert to speaking at the White House’s first ever Maker Faire. She says, “I’ve been prepared for not only high school, but real life as well.”

Truths buried in mass graves. In any murder case, finding a body confirms the crime. But in the aftermath of a state-sponsored genocide, says Fredy Peccerelli, finding such evidence requires a mix or archeology, anthropology and genetics. Peccerelli talks to families who lost loved ones in Guatemala’s 36-year-long conflict. He then uses DNA samples that they volunteer and compares them to bodies he exhumes from mass graves. He tells the story of a group of women and children who were taken away by helicopter and never seen again — until his team was able to locate their bodies. In this way, Peccerelli helps give families peace of mind and a voice to the voiceless, as well as collects evidence for use in genocide trials.

Flex fantastic. Storyboard P specializes in movements that look like they should be impossible. A break-dancer featured in Jay-Z’s “Picasso Baby” video, he is a master of ‘flex’: a style that uses pantomime, contortions and complex footwork. He glides across the stage, his legs undulating slowly to Nas’ “I Know I Can (Be What I Wanna Be)” as if they have no bones, his feet flipping over each other in rapid swishes. It’s an eerie performance that gets the audience clapping.

Instagram for understanding. Photographer Ruddy Roye grew up in Jamaica, where class was an issue, but race simply wasn’t. When he moved to the United States, he was surprised to find the color of his skin noticed in strange ways. He turned to photography as a way to work out his complex feelings over this. Now, Roye uses Instagram to tell the stories of his neighbors in Bed-Stuy, Brooklyn. “For the first time in my life, I could bring my world of invisibility to an audience that had no editors,” he says. Showing us his beautiful images, he explains how he sees his work as a humanist project.

No love for the leech? Leeches don’t get enough credit, mostly thanks to old Hollywood depictions of them as blood thirsty, ferocious creatures. As the self-titled “Leech Guy,” Mark Siddall, a curator at the American Museum of Natural History, sees value in studying these highly diverse animals that have been used for a variety of useful medical endeavours, such as the first human dialysis ever. In a presentation not for the squeamish, he talks us about some of what leeches can do—and ends by having a leech suck on the hand of host Kelly Stoetzel. 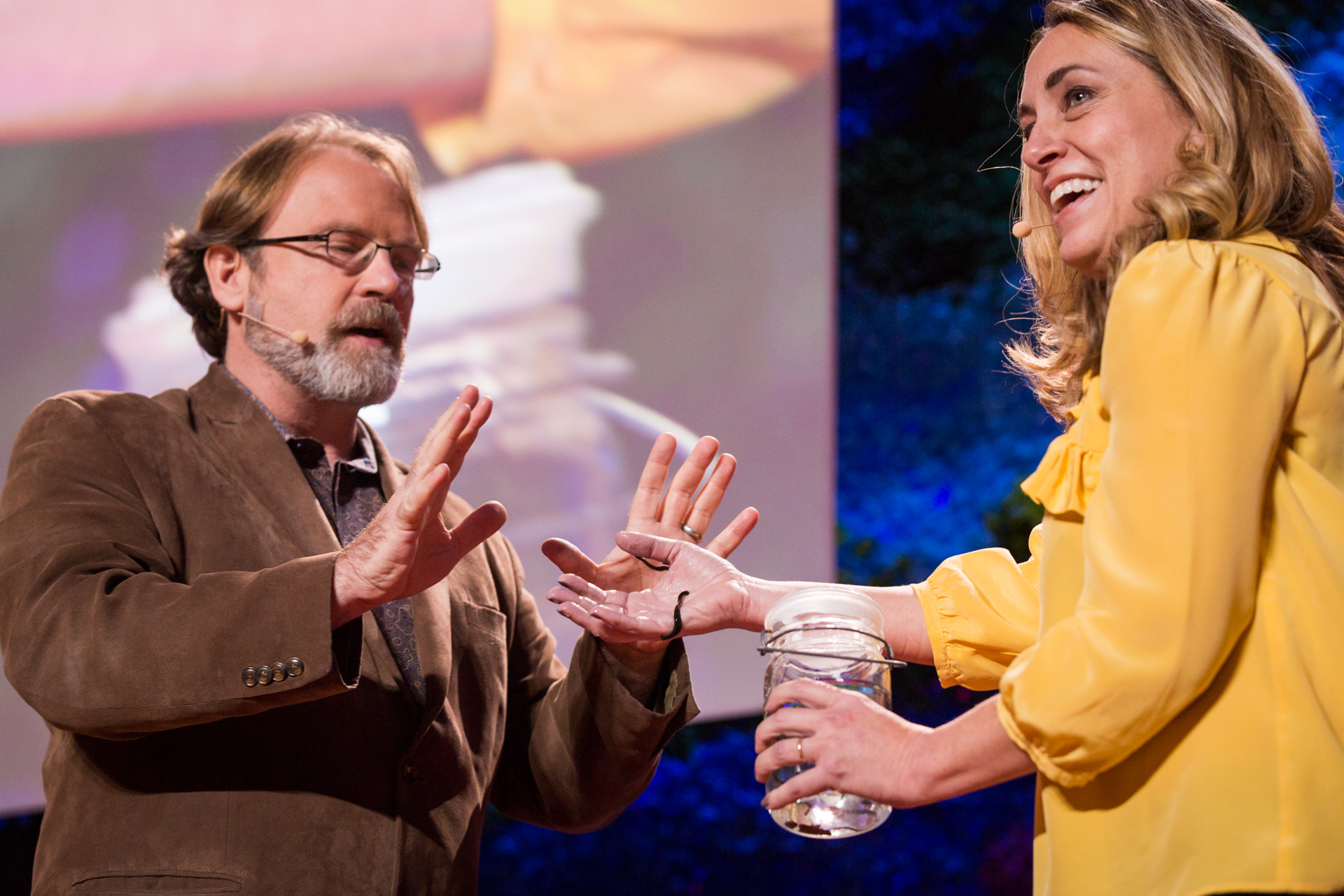