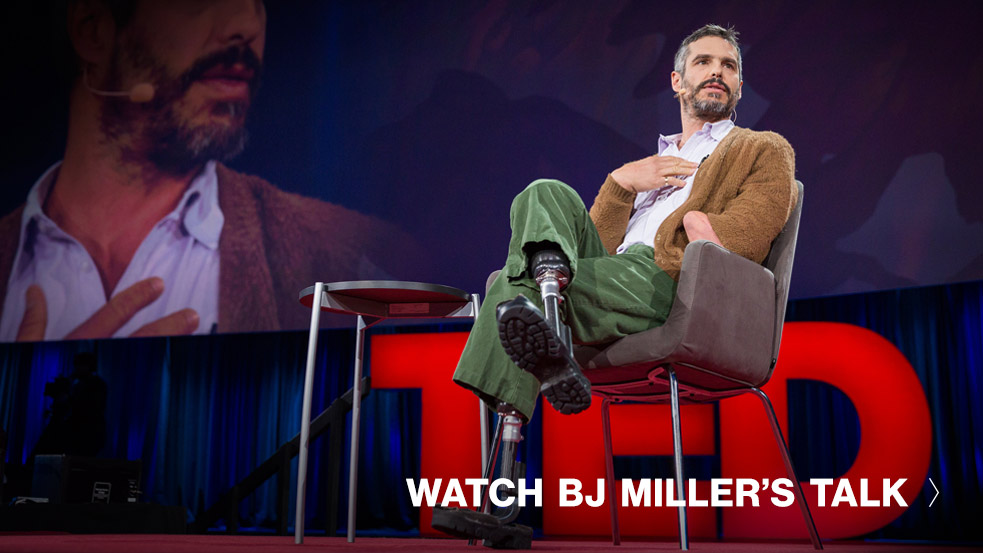 A design competition to reimagine death. 100 percent of the human population will die, and yet, why don’t we design for this inevitable outcome? OpenIDEO, design and innovation firm IDEO’s online innovation platform, has launched a new public design challenge to “reimagine the end of life experience.” BJ Miller is an advisor on the project and with the first stage completed, read a conversation between Miller and IDEO partner Dana Cho on the stories collected thus far. (Watch BJ’s TED Talk)

Women should have the right to get angry. Anger is unladylike, unfeminine and unattractive. This is not only a double standard but also hinders progress when women who speak up about injustice are seen as merely complaining. In The New York Times, author Roxane Gay asks who gets to be angry — and why should this essential human emotion fall along racial and gender lines? “When women are angry, we are wanting too much or complaining or wasting time or focusing on the wrong things or we are petty or shrill or strident or unbalanced or crazy or overly emotional. Race complicates anger. Black women are often characterized as angry simply for existing, as if anger is woven into our breath and our skin.” (Watch Roxane’s TED Talk)

A monument hiding in plain sight at Petra. If you saw Indiana Jones and the Last Crusade, then you’ve seen the stunning sandstone buildings of Petra, built by the ancient Nabataeans. Archaeologists have been studying this World Heritage Site for more than 200 years. And yet, using satellite and drone imagery, TED Prize winner Sarah Parcak and fellow archaeologist Christopher A. Tuttle have found a large monumental platform — about as long as an Olympic swimming pool and twice as wide — half a mile to the south of the city. ”It’s this very large platform that many of us have walked over for years, and probably didn’t even realize we were walking on,” Parcak told the AP. The report on the finding was published in the Bulletin of the American Schools of Oriental Research and got coverage in publications around the world — but Parcak gave students at TEDYouth a preview of the find last fall. (Watch Sarah’s TED Talk, and sign up for updates on her TED Prize wish.)

We we need more data on women. Today in much of the developing world, there are entire generations of women who have no record of their lives — no birth or death certificates, records showing they went to school, employment records, medical documents — nothing. As Melinda Gates writes in The Huffington Post, this vacuum of data on women’s well-being, or lack thereof, makes it extremely difficult to know how to start lowering the number of preventable deaths women face each year. (Watch Melinda’s TED Talk)
How, exactly, should you follow your passion? Graduation day comes, pictures are taken, farewells given, and commencement speeches move you to tears. Now that it’s time for the “real world,” many grads want to immediately find their passion. But how do you do that? Angela Duckworth is a psychologist who studies people and their passions, and in The New York Times, she reminds students that following your passion rarely offers a straightforward path. She focuses instead on fostering your passion: moving toward what interests you, seeking purpose and finishing strong. (Watch Angela’s TED Talk)

Bird brains: a bit dense, aren’t they? Bird-brained — new research published by Suzana Herculano-Houzel and team in the Proceedings of the National Academy of Sciences suggests that the saying may not mean what we think. While commonly thought of as stupid, scientists have long wondered at the ability of birds to perform advanced cognitive feats, like making tools and solving complex problems, and the new study may explain how: their brains are dense, packing in more neurons per square inch than mammalian brains. While this helps explain an old mystery, it also raises a new one. Their results show that there is more than one way to build a complex brain, but the question is, which way evolved first? (Watch Suzana’s TED Talk)

A financial reality check. When it comes to money, we’re not always as smart as we think we are. In Scientific American, Dan Ariely, Kristen Berman and Wendy de la Rosa use a handful of different research findings to show how “we have a natural bias towards ‘earning’ rather than ‘saving’ when we’re in financial distress—not because we don’t know how to save money or we aren’t trying to save money, but because we perceive earning money as a more productive way to increase financial well-being.” But it turns out that our predisposition may lead us astray and hurt rather than help. (Watch Dan’s TED Talk)

What makes a great sequel? At TED2012, Andrew Stanton shared the lessons that helped him craft stories to captivate the hearts and imaginations of millions of moviegoers, in films like WALL-E and Toy Story. On June 17, he put those lessons to the test again with Finding Dory, the highly anticipated (and long-denied) sequel to Finding Nemo. “We all love stories,” said Stanton at TED; “we’re born for them. Stories affirm who we are. We all want affirmations that our lives have meaning. And nothing does a greater affirmation than when we connect through stories. It can cross the barriers of time, past, present and future, and allow us to experience the similarities between ourselves and through others, real and imagined.” (Watch Andrew’s TED Talk)