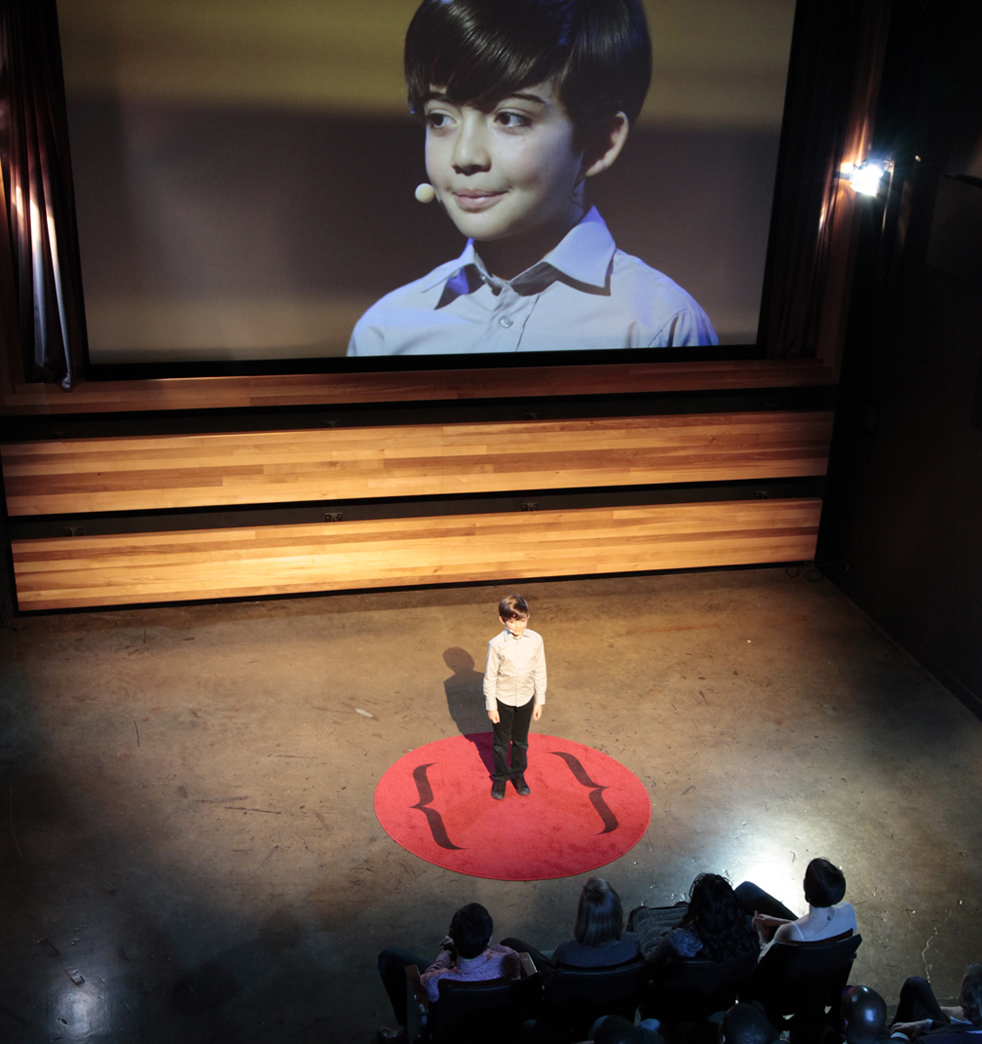 In “The Thought Leader,” a satire created by artist Liz Magic Laser, 10-year-old Alex Ammerman gives a TED Talk that ponders the “dark chasm of meaninglessness.” And he does it perfectly. Photo: Courtesy of Various Small Fires, Los Angeles

On the surface, the talk is “TED-like”: the round red carpet, the well-rehearsed speaker, the shadowy audience, the headset mic.

But quickly, discordant elements begin to register: the strange parenthetical markings on the floor, the inappropriate audience responses, the fact that the speaker himself is a 10-year-old boy.

Welcome to “The Thought Leader,” a satire on media spectacle and mindless optimism created by artist Liz Magic Laser for her solo exhibition at the Los Angeles gallery Various Small Fires. In “The Thought Leader,” Laser plays with the impact of delivering a bleak message in the TED Talk format.

See, in watching talks, Laser noticed a theme — a certain optimism about how an individual’s work could benefit the greater good. This reminded her of the 19th-century concept of “enlightened self-interest,” and the muse led her to Fyodor Dostoevsky’s Notes From Underground, his response to the concept, considered by many to be the first existentialist novel. “It provided an uncomfortable and revealing counterpoint,” Laser says. “More than a 150 years later, Dostoevsky’s nihilistic critique still holds water.”

For the star of her talk, Laser cast a child actor, Alex Ammerman, to subvert notions of children as a “symbol of hope and change.” Ammerman flawlessly mirrors gestures of stereotypical TED speakers as he delivers his opening lines, which Laser derived from a David Foster Wallace essay: “I am a sick man, I am a spiteful man. Are you a good person? Deep down, do you even really want to be a good person?”

.
So how did a bright-eyed, dimpled 10-year-old come to grasp the gloom of his monologue? “We had some challenging conversations early on,” says Laser. “But as we worked together, Alex came to an understanding of the ideas at hand.” It’s true — his delivery of Dostoevsky’s bleakest ideas is both knowing and spot-on.

To film this mock-talk, Laser invited actors, friends and former students to gather in a theater in Kickstarter’s Brooklyn office. The atmosphere was festive at first, but after five numbing hours of shooting, the audience settled into palpable boredom. Despite the faithful echo of TED camerawork by cinematographers Chris Heinrich and Tom Richmond, the long dolly shots over rows of impassive faces only enhance “The Thought Leader’s” sinister aura.

Then there’s the editing. Laser removes audience reactions from their contexts, re-inserting their laughter and silence in inappropriate places, and creating “a representation of public apathy that is aggressive rather than passive,” as she puts it. Overall, it creates an atmosphere of menace.

But perhaps the most mysterious element of “The Thought Leader” is the enigmatic parentheses painted on the carpet — the focus of the opening and closing shots of the video. In part, they mirror the last line of Ammerman’s talk: “Perhaps I’m only imagining an audience in order to feel more dignified as I stand here in parenthesis.” It’s also a comment on the diminished, secondary nature of the individual standing in a forum before an indifferent and hostile audience. It adds a bleak veneer.

The Los Angeles Times’ review of Laser’s show reads, “[TED Talks] are meant to motivate and inspire. Speakers don’t typically ponder ‘the dark chasm of meaninglessness.’” And while this reflects a common misconception of TED Talks — they are meant to share ideas both hopeful and challenging — “The Thought Leader” reminds viewers that critical thinking is very much an idea worth spreading.

PS: If you are looking for a few TED Talks that do in fact ponder ‘the dark chasm of meaninglessness,’ may we suggest: