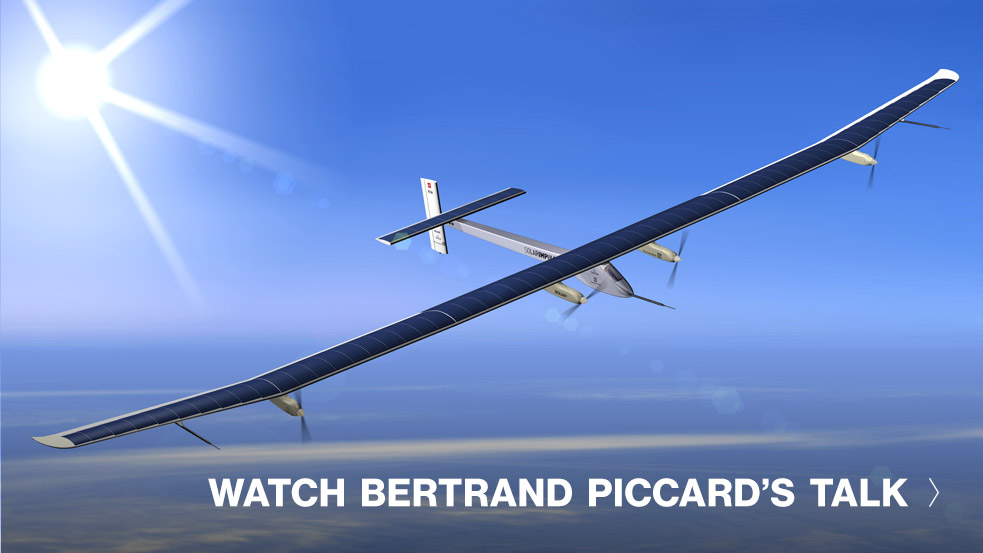 Around the globe without a drop of fuel. What has the wingspan of a Boeing 747 but weighs only about as much as an SUV? The answer is Bertrand Piccard’s Solar Impulse 2, an airplane fueled entirely by solar energy that landed in California on April 24 after a 62-hour flight across the Pacific Ocean from Oahu. The plane’s journey around the world began more than a year ago in Abu Dhabi, but weather stalled them for weeks in China, then overheated batteries grounded them in Hawaii for almost 10 months. If all goes well, Solar Impulse 2 will touch back down in Abu Dhabi at the end of the summer and complete Piccard’s dream of demonstrating the viability of renewable energy technologies. (Watch Bertrand’s TED Talk and learn more on TED’s Ideas blog)

How evolution alters our reality. While we trust that what we see, smell, taste, feel and hear is a true reality, Donald Hoffman, a professor of cognitive neuroscience, argues that what we perceive is our brain’s feeble imitation. In The Atlantic, author Amanda Geftner highlights an interview with partner Quanta Magazine in which Hoffman lays out the secret evolutionary advantage of that: “According to evolution by natural selection, an organism that sees reality as it is will never be more fit than an organism of equal complexity that sees none of reality but is just tuned to fitness. Never.” As we compete for resources, he says, our skewed perceptions enable our survival: “Part of that involves hiding from us the stuff we don’t need to know. And that’s pretty much all of reality, whatever reality might be. If you had to spend all that time figuring it out, the tiger would eat you.” (Watch Donald’s TED Talk)

Abortion protests through the patient’s eyes. Virtual reality enthusiasts often point to the medium’s power for creating empathy between viewer and subject, often inspired by the example of VR journalism pioneer Nonny de la Peña. Her latest documentary Across the Line, a Planned Parenthood collaboration, puts viewers in the scene as a patient seeking reproductive healthcare is harassed by anti-abortion extremists. Premiering at the Sundance Film Festival in January, the documentary has been making the rounds since then with an April 16 exhibition at the Tribeca Film Festival and a International Documentary Association installation and workshop on VR documentary April 22-23. (Watch Nonny’s TED Talk)

TIME honors TEDsters’ contributions. In TIME Magazine’s new list of 100 Most Influential People, two TED speakers and one playlist curator are called out. Christiana Figueres, executive secretary of the UNFCCC, was honored for her outstanding leadership in the global fight against climate change. Robert Redford writes: “Her work shows the world that we can succeed in avoiding catastrophic climate change and become more unified in the process.” Architect Bjarke Ingels was honored for bringing a new energy to his field. “He is the embodiment of a fully fledged new typology, which responds perfectly to the current zeitgeist,” architect Rem Koolhaas wrote. Director Ryan Coogler (Creed, Fruitvale Station) was honored by writer Ta-Nehisi Coates: “On the biggest screen, he confers humanity and beauty on people told they are innately without it.” (Watch Christiana and Bjarke’s TED Talks and download Ryan’s personally curated playlist)

The web of corruption in Brazil. In The Intercept, journalist Glenn Greenwald sheds light on the ongoing attempt to impeach Brazilian president Dilma Rousseff by examining not Rousseff herself more closely, but the man who would replace her, Vice President Michael Temer. Of the impeachment, Greenwald says, “How can anyone rational believe that anti-corruption anger is driving the elite effort to remove Dilma, when they are now installing someone as president who is accused of corruption far more serious than she is?” By examining the chain of political inheritance and media supporters of the impeachment, Greenwald argues that the real reason behind Rousseff’s impeachment is the exact opposite of its pretext–rather than being a move to eradicate corruption, it is actually a maneuver to protect it. (Watch Glenn’s TED Talk)

A world that celebrates all kinds of minds. On April 20, animal behavior expert and autism activist Temple Grandin was elected to the National Academy of Arts and Sciences. Grandin has been a vocal spokesperson for autism awareness and a role model for many individuals on the spectrum. Grandin sees autism not as a limitation to be overcome, but an opportunity for seeing the world in new and innovative ways, a message she shared from the TED stage in 2010. She credits her own experiences with autism and her visual way of thinking for her unique approach to animal handling, an approach that would eventually lead to her induction this week. (Watch Temple’s TED Talk)

Robots are people, too! Okay, maybe not — but they can be still be your friends. Jibo, Cynthia Brezeal’s line of social robots, won Popular Science’s 2016 Invention Award. This friendly, smart assistant adds convenience to a user instead of distracting them from work, family or friends; it can take calls, recognize faces, give alerts, learn your preferences, engage with you, and even read you your favorite bedtime story. (Watch Cynthia’s TED Talk)