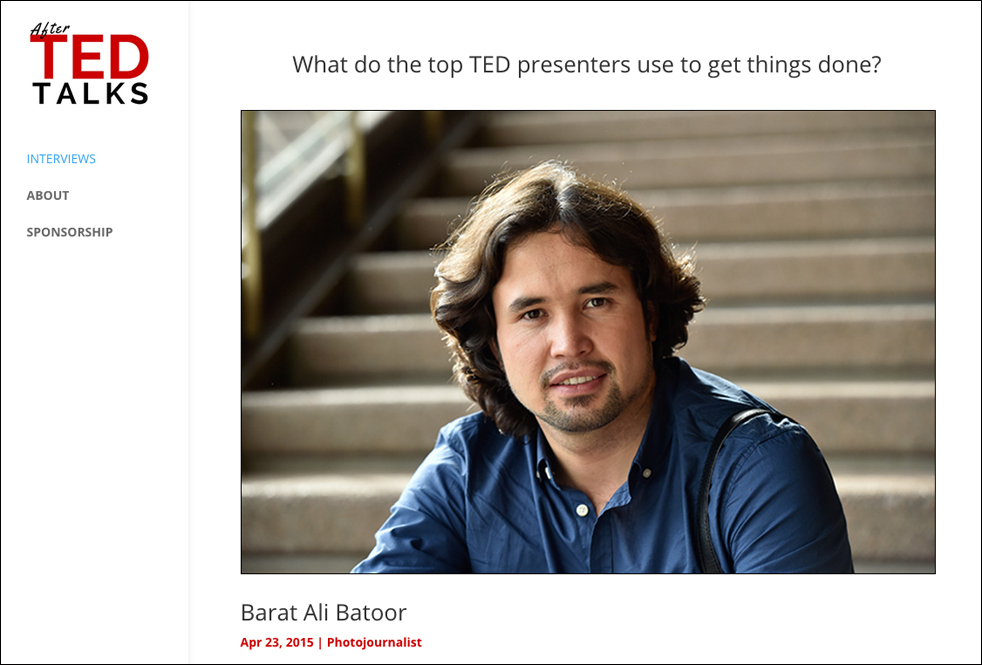 TED speaker Virginia Postrel swears by the app Anti-Social when she needs to focus on her writing. Jon Gosier considers his iPhone 5 “the Swiss Army knife of electronic gadgetry,” and relies on Waze for “directions and avoiding speeding tickets.” Meanwhile, Heather Barnett never reads a single book at a time — she usually has “a pile of books by my bed, spanning psychology, art, innovation, biology, education and fiction.”

We know this thanks to Brian Stefanelli’s website, After TED Talks, which posts his interviews with TED and TEDx speakers after their talks go live online. While these interviews dig into the topic of the talks, Stefanelli makes sure to ask speakers the same four questions: “What hardware do you use?” “What apps or software can you not live without?” “What are you currently reading?” and “What projects are you currently working on?” Their answers are fascinating.

Stefanelli discovered TED when someone posted a talk given by virtual reality pioneer Jaron Lanier at TEDxSF on StumbleUpon. “He was playing some sort of bamboo instrument from Vietnam,” recalls Stefanelli. “I spent the next few hours looking for other talks and became obsessed.” He found himself growing curious about (a) what his favorite speakers had been up to since they gave their talk and (b) how they generally organized their lives. So he decided to ask them — and blog the results. “There are many people that are just as curious as I am,” he says.

“In the beginning, I figured that if I could get a speaker who was listed in the most-viewed TED Talks of all time section on the TED site to answer my questions, it would give me credibility when I approached other speakers. But it turned out those speakers were really hard to get in touch with,” he says. So he took another tack, and just starting chatting with speakers he liked via social media. This produced better results.

“The first speaker that actually sent back a response was James Howard Kunstler. He was really generous with his answers,” says Stefanelli. “After that, I was motivated to reach out to more people.”

So far, he has interviewed 15 speakers whose talk topics range from topics from green design to the treatment of the Hazara people in Afghanistan and Pakistan. They’re short, compelling reads — perhaps because, as he says, “I have an admiration for every speaker I interview.”

Fanfare shares art, music, remixes, websites and more created by TED fans around our content. Have something you’d like to share? Write kate@ted.com and tell her about it.