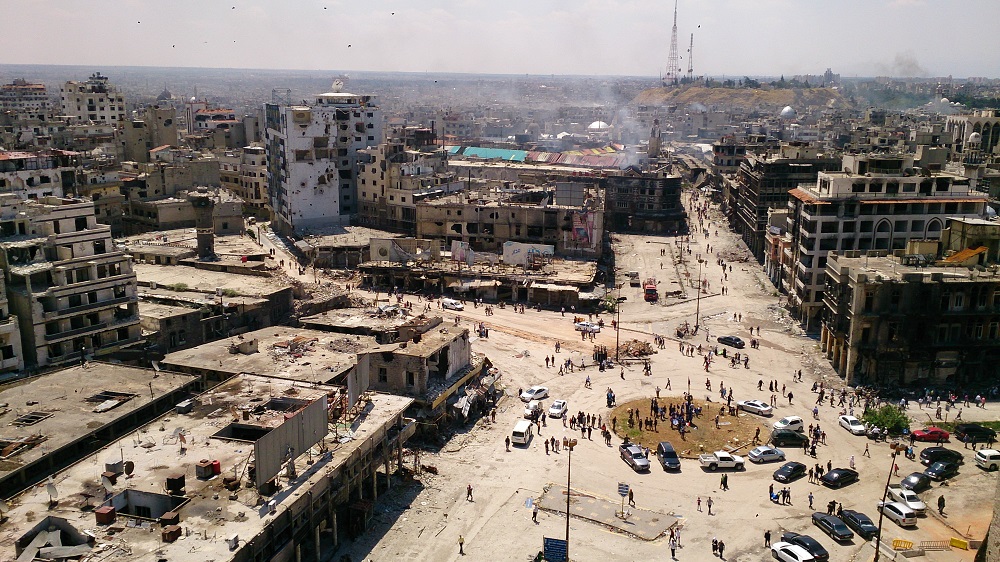 A view over the Old Square of Homs, looking towards the Old Souk, taken from the remains of Marwa and Ghassan’s destroyed architecture studio. Photo: Marwa Al-Sabouni, 2016.

At TEDSummit in June, we featured a talk by a young Syrian architect, Marwa Al-Sabouni. In it, she shares an important and original insight about how the roots of conflict can be traced, among other better-studied reasons, to misdirected and divisive urbanism. She offers the example of her own country, where violent conflict has been raging and spreading for more than five years now, destabilizing the whole region and driving millions of refugees into the neighboring countries and, more recently, Europe.

Marwa herself, however, could not travel to our conference to give her talk, because she lives in Homs, a city in the central-western part of Syria. Traveling outwards isn’t easy, to say the least, and there is no guarantee of being able to travel back. And with her family, she’s determined to stay despite the dangers.

Homs is today a half-destroyed city. Reporters have equated it to Berlin after World War II. Before the war, the province’s population was nearly 2 million people; it is down by more than half now. “Almost everyone we knew has left,” says Marwa, who’s 35. With her husband Ghassan, 43, and their daughter Naya and son Ayk (11 and 8, respectively), she’s among those who have stayed. “We were lucky: our house is still standing,” she adds candidly. The small architecture studio she and Ghassan ran in the center of town before the war, however, is a ruin, only rubble surrounding what’s barely recognizable as a whiteboard. 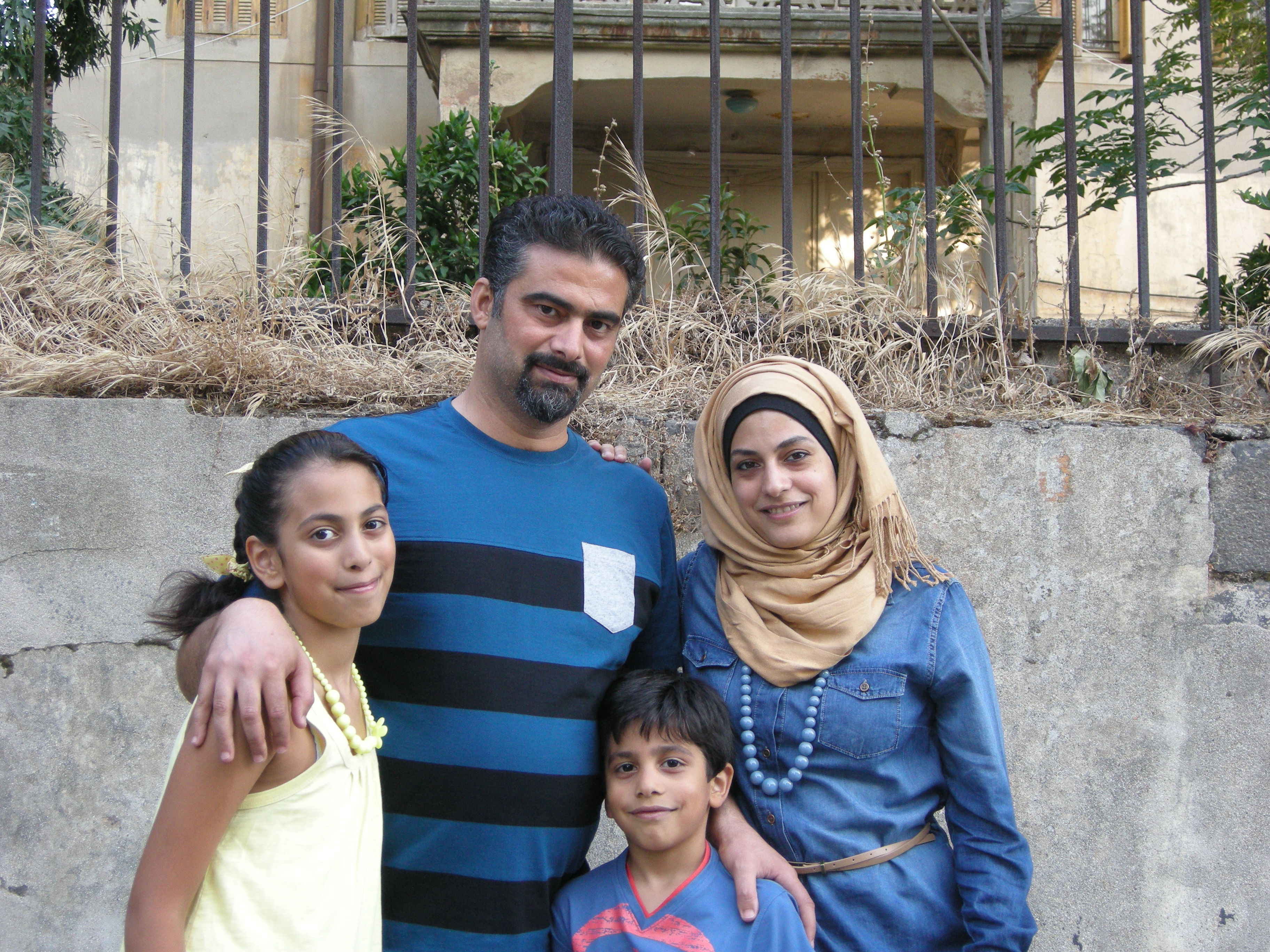 Marwa Al-Sabouni photographed earlier this year in Homs with her husband, Ghassan, their daugther Naya and son Ayk.

To bring Marwa’s idea to TED, therefore, we resolved to record the talk over the Internet. Which meant dealing with unstable connectivity, electricity cuts and background noise. More on that below.

I discovered Marwa Al-Sabouni during one of my “reading storms” last Spring. I’ve curated the TEDGlobal conferences for 11 years, as well as many other TED events, and in the process of designing the speaker programs I’ve come to develop the habit of doing research in waves. While I work with a first group of speakers, I collect books and field notes and clippings from newspapers, journals, blogs and social media about other potential speakers. Something would pique my interest online or offline. I would visit a lab or meet a scientist or artist and take notes. A TED community member would point me to something intriguing. All goes into a folder that, after a while, may contain ideas for dozens of potential TED talks. When enough ideas have accumulated, I then go off for a few days and “storm” (for lack of a better word) that folder, reading voraciously through a wide variety of topics and researching them with my assistant Katerina Biliouri, establishing priorities and connections and imagining possible narratives. That’s how the speaker programs come together.

One of those articles was a profile of this young Syrian architect who had just published a book written during the war, while living in the middle of, called The Battle for Home. I picked it up and read it, and found, first, an amazing story of courage and resilience, of insight and hope. But the core of the book is a convincing study on how communities move apart, mixed urban fabrics turn into segregated islands, and living together morphs into sectarian hatred. The Syrian war has many roots — political, social, religious and economic. Marwa’s book highlights another cause that has been overlooked: the role played by decades of mismanaged architecture and divisive urban planning. A sentence from her talk summarizes her main argument: “From my point of view, losing the sense of belonging to a place and the sense of sharing it with someone else has made it a lot easier to destroy.”

Page after page, it became obvious that there was a potential TED Talk here. Not only for the provocative originality of her insights. Her reasoning also maps with similar developments in other parts of the world — reading some chapters of her book, it’s easy to think for instance of the marginalized suburbs, the banlieues, of Paris or Brussels. Furthermore, understanding how divisive urban planning can create divisions in society may be the only way to prevent this kind of bad planning from happening again.

While the book was fascinating, I didn’t know whether Marwa could tell the story in the form of a talk. A friend who’s published by the same house introduced me to her publisher, Thames & Hudson in London, who after a discussion put me in touch with her. We started emailing, then talking over video calls, and I learned to know a brilliant, optimistic, very articulate woman. She told me that life and economic activity have been slowly coming back to the least-destroyed parts of Homs since the beginning of the year. Ghassan, Marwa and their kids live on a second-floor apartment overlooking rows of small shops and workshops. When the war broke out, they were mostly relying on Internet cafés for their electronic communication, but the fighting took connectivity with it for long stretches of time, and power blackouts weren’t kind to the computers. Only a couple of years ago they got a friend to bring them a laptop from the UAE, and managed to set up a capricious connection at home.

While working on successive drafts of the talk, which focuses on architecture, the conversations were often about daily life during the war. “From 2012 to the beginning of 2015, fighting was very intense. Bombing and shelling were relentless. We almost learned to differentiate the weaponry just by their ‘tone’. There were snipers. At times even birds and cats had fled the city,” she told me. While their studio was right where most destruction happened, their home was in another neighborhood, a less-targeted one. “We got a few bullets inside the kitchen, broken windows from the shock of shelling. We spent most of the time indoors and never went out after dark. When the walls shook during the night, we called it a ‘noisy night.’ Garbage filled the streets. The cold winters were colder without heating — there was no fuel, and only a few hours of electricity which, like water and gas, was scarce and expensive. At a certain point, these essentials became the only things people talked about: how to find them, how to cope.”

“There were times when we had to bathe using a pot, and read using candles” until LED batteries arrived. People who were sick got sicker because hospitals weren’t functioning, “and the Red Crescent with its humble resources was the main help.” Ghassan and Marwa had no car, but those who did “struggled to find gas, and often it would be mixed with other substances, thus ruining the engines, for which there were no spare parts.” That statement applies more generally to almost any kind of goods. “If they existed,” she says, “the quality was very bad, the prices very high, and the one who had them generally had very bad manners.”

To pay those prices — to keep going during the worst period of the war — Ghassan scraped together some small income and his brother sent help from abroad, and the family drained their small savings.

In late 2015, things in Homs started getting gradually better, with a ceasefire agreed between the government and the rebel factions. “Until last year, clothes were mostly damaged or second-hand, people would buy a pair of torn pants and fix them. Now there are more goods, those who had stalls in the old city market now sell off shacks on the streets. The quality is still bad though.” There are now makeshift hospitals, schools and other facilities, mostly located in the residential buildings that are still standing.

The obvious question at this point is: have Ghassan and Marwa ever thought of leaving, like so many others? “No. We believe that staying was the right choice for our family,” she said, making me marvel at their bravery.

It is absolutely remarkable that Naya and Ayk managed to never miss a day of school despite the war, thanks to the presence of a small school very close to their home. They now attend a bigger one farther away, and “are both very good”, says their mother. Before the war, they were into art. Naya took violin and drawing lessons, Ayk preferred the piano, “but all had to stop because there were no more good teachers and no instruments”. Marwa has recently started teaching architectural design to second-year students at a private university in Hama, about 40 kilometers from Homs (the main road is now blocked and she has to take a much longer detour). Ghassan juggles several small jobs to support the family, including a tiny bookstore that he and Marwa opened recently, having found a way to procure books every few weeks from a handful of publishers, mostly in English, through a wholesaler in Damascus. “We’re making a little money from it, enough to keep it going, but our main goal is to make a small cultural contribution to restoring some normalcy in the town; people tell us that they see it as a sign of the worst being over,” she told me during one of our conversations.

A few weeks before the TEDSummit, with our video team in New York, across seven time zones, we made several attempts at recording Marwa’s talk, over the Internet, from her home in Homs. We tried at different times of the day, because the quality of the connection would vary greatly. We used different types of videoconferencing software. At moments, Marwa’s voice would disappear for a few seconds, the light would change in her home, and a new noise would signal that the grid had gone off and the generators had kicked in. At other times, connectivity was so bad that it was impossible to distinguish Marwa’s words. Making the recording more difficult were the noises of the town, the honking of cars and the racket of trucks. But accustomed to poor connectivity, she persevered, speaking to us — to the old camera attached to her laptop — over and over, with Ghassan helping out to make sure things were working at their end.

We finally got the full talk onto our hard drives. She appears in her living room, wearing a purple headscarf, against the backdrop of two framed drawings by her children. We had to apply filtering software to improve the quality of the sound. Our video editors added photos and images, some of them aerial shots of the city, courtesy of UNHCR. And the brilliant TED volunteer translators worked fast to get the first subtitles (in Arabic, of course) ready before the talk was screened at the conference (in the meantime, nine other languages have been added).

It is an important talk. Fully worth 10 minutes and a half of your time. Watch it here.

Bruno Giussani is the European director of TED and the curator of TEDGlobal and TEDSummit.