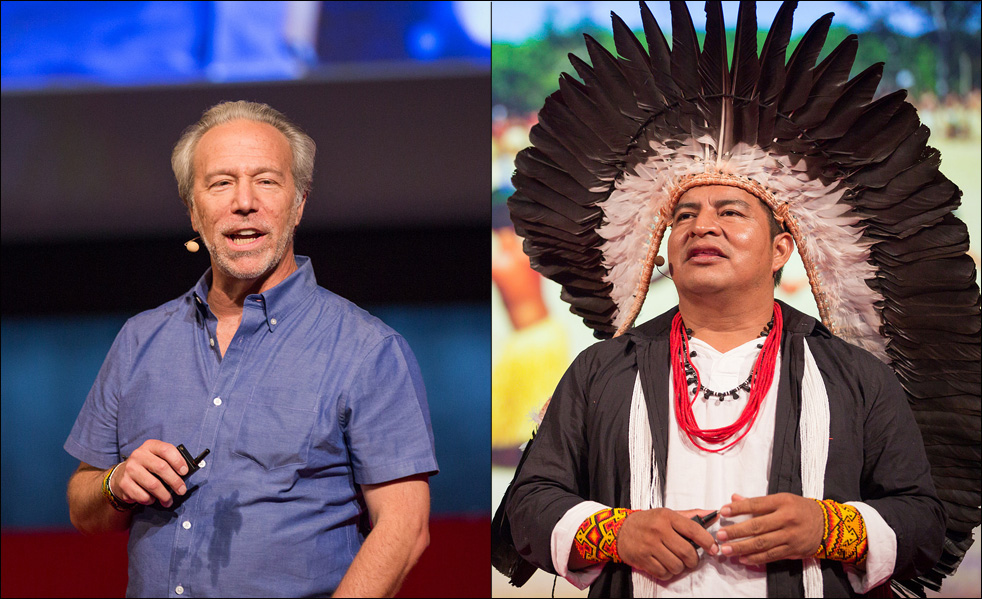 A few years ago, ethno-botanist Mark Plotkin injured his foot. A visit to a doctor at home had him feeling pain-free for a few months, but things changed when he headed to the Amazon rainforest for work. There, a local shaman noticed his limp and offered him a palm tree wrap along with a specially-brewed tea. Plotkin has now been pain-free for years, he says in his TED talk, “What the people of the Amazon know that you don’t.”

This experience is just one that has led him to see the indigenous tribes of the Amazon—and the medicinal plants that their shamans cultivate—as an irreplaceable repository of wisdom. With his non-profit, the Amazon Conservation Team, Plotkin works hand-in-hand with indigenous tribes in the Amazon to help them put in place their own conservation strategies, and to make sure that they are compensated for ingredients they share with the world. Because, as Plotkin says, the people of the Amazon have a deep understanding of the “treasure trove” of potential cures in the their midst.

Last month at TEDGlobal, our audience got the rare opportunity to hear directly from an Amazonian indigenous chief, who happens to be a longtime friend and colleague of Plotkin’s. Tashka Yawanawá became chief of the Yawanawá people at age 35, and, on the stage, he told the recent story of Brazil’s indigenous rights movement, which gained momentum in the ’70s and ’80s. But lately, he says, government support for indigenous autonomy has waned, as the lands that the communities occupy come under threat from logging, mining and other types of exploitation. Chief Tashka expressed concern about the exploitation of local medicinal plants, key to Yawanawá beliefs, and explained how they are working to distribute their resources to outsiders through a partnership with Aveda, among other channels, that allows them to generate income for the community.

This month, Tashka Yawanawá is helping his tribe cope with terrible flooding in his region, far worse than they’ve ever seen. Many homes were destroyed, along with well pumps, water filters, generators, boats and more. We will present Yawanawá’s talk when he is back online and able to engage in the conversation.

In the meantime, Plotkin’s talk gives a powerful introduction to an essentially identical idea. Both of these speakers stressed the importance of indigenous ethnomedical wisdom, and the need to protect it and transmit it to younger generations. Both highlighted protecting nature as an absolute essential.

With Tashka Yawanawá offline, we asked Plotkin to talk to us a little bit about his friend.

“It’s a very strange story,” says Plotkin describing how they met. “I was speaking at a gathering in New Mexico, of all places, and there was this guy there [who I thought was] Native American. We were talking, and he had a little bit of an accent. So I said, ‘Are you Mexican?’ he said, ‘No, my wife is. I’m Brazilian.’ So we switched into Portuguese. We spent a couple of days together.”

Plotkin finds himself routinely blown away by Tashka Yawanawá.

“He’s such a fascinating character,” says Plotkin. “He’s a Brazilian Indian who wanted to be a Mexican and then wanted to be a cowboy. He has this unusual sort of tri-cultural background and now he’s gone back to be the chief of his community and protect their culture in the forest. I think he’s fascinating.”

While they don’t work together often—Plotkin says that Chief Tashka does a great job representing for his people—they do work in the same areas. “We watch and admire,” says Plotkin. “A lot of what the Yawanawá are doing is what [the Amazon Conservation Team] is doing too. We showed up in the Amazon 12 years ago and said, ‘We’re not going to map your lands, you’re going to map your lands. We’re going to give you the equipment and teach you how to do it, but we would like you to do it.’ That was revolutionary when we started and — having Tashka do it — that supported our work … We were also the first organization to encourage elderly indigenous people to pass their knowledge on to their kids and their grandkids. Having groups like Tashka’s take that on themselves is a measure of success. Because it shouldn’t be about us doing it — it should be about the people that it means the most to doing it themselves.”

While Plotkin works more often with the Trio people, another Amazonian community, he is continually intrigued by the Yawanawá. “They are people who have been in touch with the outside world for a while,” he says, “but they have managed to hang on to their culture and their forest, which is no easy thing to do in this world that we live in, where everybody everywhere wants resources.”

And this gets to one of the key tensions in Plotkin’s work—that introducing indigenous communities to the outside world can be a tricky thing. “Technology can help and technology can hurt,” says Plotkin. “If you go into a village and start handing out GPSs and iPads and radios, you’re may be giving them the impression that we know magic and that everything we know is better, which is totally false. It’s better to do it in a culturally sensitive way. To say, ‘Look, we have antibiotics and they’re great — they might be able to cure infections your shamans can’t — but you guys have medicines we don’t have. You can cure some things that we sometimes can’t.’”

As for Tashka Yawanawá, Plotkin does hope that the outside world will get to better know his friend through his upcoming TED Talk. “I’m hoping somebody will make a movie about his life,” says Plotkin.

The Amazon Conservation Team is participating in the Skoll Foundation Crowdrise Challenge. Find out how a donation can be doubled or tripled »