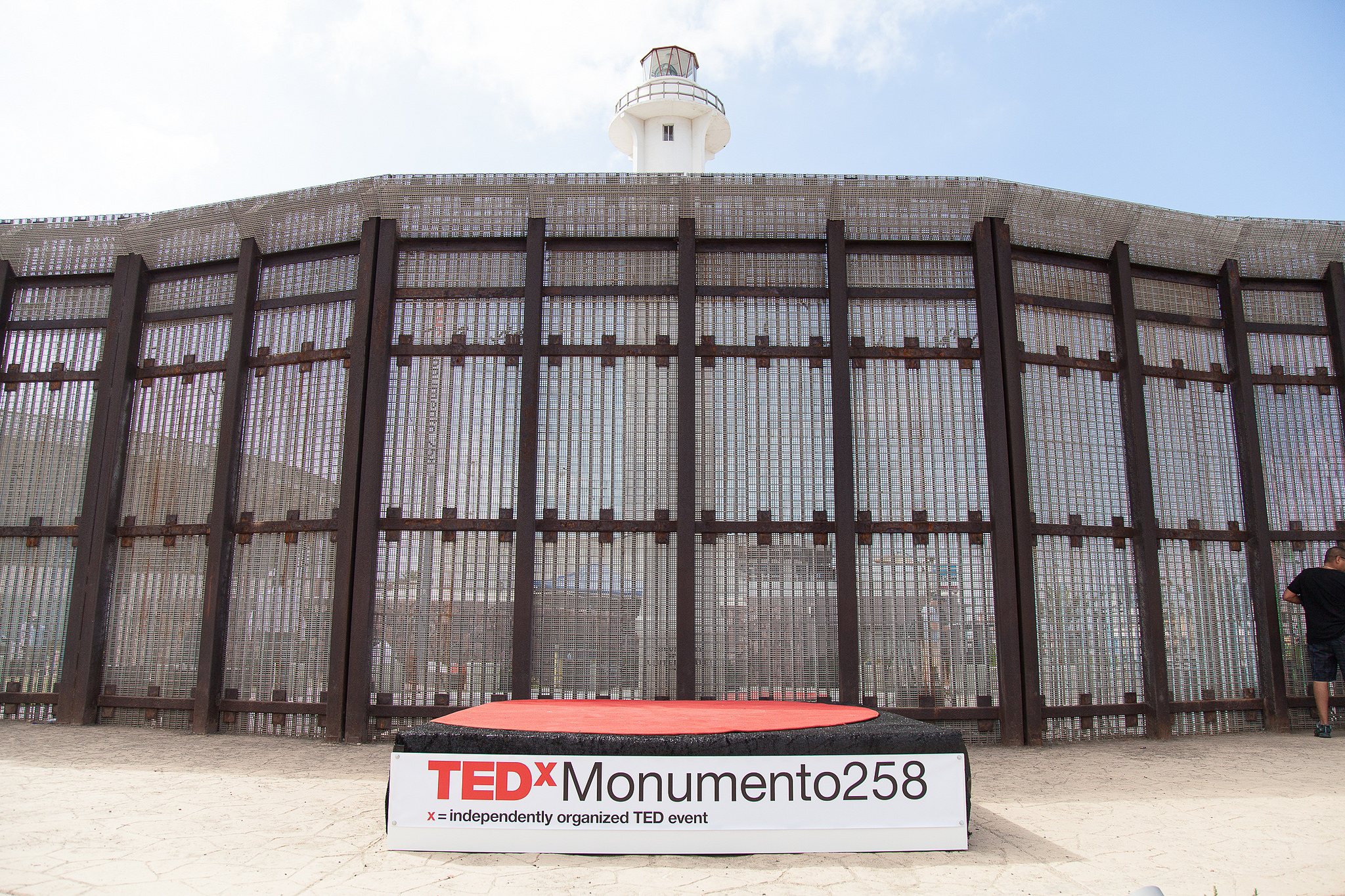 In early September, TEDxMonumento258 became the first TEDx event organized by teams in two different countries and held simultaneously across a border. Planning the event took more than two and a half years. Constraints on the US side proved the most difficult to overcome. Photo: Natalia Robert/TEDxMonumento258

Adriana Eguia Alaniz started her talk in the United States, speaking English. She ended it in Mexico, speaking Spanish.

Welcome to TEDxMonumento258, an event held across the US-Mexico border. On September 4, 2015, attendees gathered in both San Diego and Tijuana to watch as ideas permeated the border fence that divides the cities. The organizers of TEDxSanDiego and TEDxTijuana planned this day-long event together, and imagined it as a metaphor. “You can pass laws, you can build fences,” said San Diego-based organizer Mark Lovett, “but you will never stop cultures from sharing their lives and ideas.”

The event name pointed to a symbol of the separation.

“At the border, there’s a marble obelisk called Monument 258,” said Lovett. “It was the first point of demarcation between the United States and Mexico after the Treaty of Guadalupe Hidalgo was signed 167 years ago, at the end of the Mexican-American War. … Everybody who lives in this region has been affected by the decisions made back then.”

Crossing the border between San Diego and Tijuana takes minutes at a good time, and several hours at a bad one. But in Friendship Park, where Monument 258 stands, a stretch of fence allows for interaction without crossing. The fence here is a thick, waffle-like, metal mesh — you can see and hear through it. The TEDxMonumento258 team decided to build two stages, back-to-back, one on each side. The speaker program would alternate — a speaker on the US side, then a speaker on the Mexico side.

The format was simple. But the planning was complex. It took more than two and a half years. 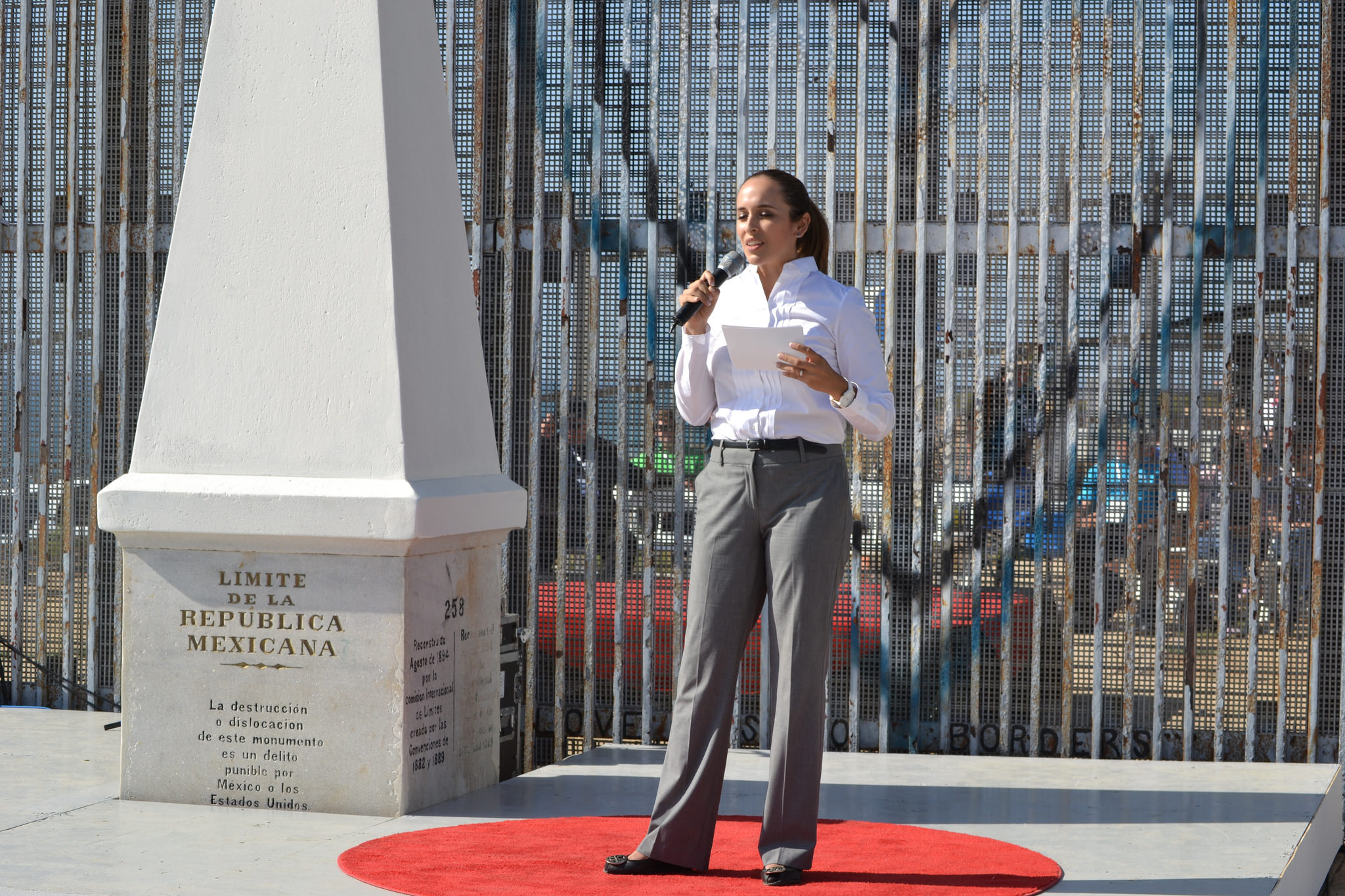 Adriana Eguia Alaniz stands next to Monument 258, the first point of demarcation between the US and Mexico. The stage on the Mexican side of the fence was built to incorporate it. Eguia Alaniz began her talk in the morning in the US and ended it in the afternoon in Mexico. Photo: Arturo Loaiza/TEDxMonumento258

The US side of Friendship Park is gated — it’s guarded by US Border Patrol and is generally closed to the public. “On Saturday and Sunday, they open the outer gate for four hours and allow people to walk up to the fence and talk to relatives in Tijuana,” said Lovett.

Lovett and his co-organizer Janelle Doll needed the Border Patrol’s blessing to hold an event here, especially one on a weekday. That process took time. Along with Tijuana-based organizers Heberto Peterson and Ariosto Manrique, the two also worked with the mayor of San Diego, the mayor of Tijuana and both cities’ “binational liaisons” to keep plans moving forward.

Still, technical challenges abounded. On the US side, Friendship Park has no power or wi-fi. Generators aren’t allowed, nor are tents for shade or screens where speakers could show slides. To power the event, Lovett had to get permission to run a 400-foot extension cord from a women’s bathroom in Border Field State Park, outside Friendship Park’s boundary. “We might be the first TEDx event powered by a bathroom,” he said.

Also difficult: getting permission to run a cable through the border fence, so that the footage shot on battery-powered cameras on the US side could be part of the event’s livestream. The livestream was run through the Mexican side of Friendship Park, a public beach called Playas de Tijuana. This is where Monument 258 stands, near a lighthouse, with a backdrop of murals painted on the border fence.

“On the Mexican side, we have electricity, Internet, public access to the park,” said Peterson. “People usually think about it as the other way around.”

Because of the constraints of the US side, the organizing team decided not to translate between English and Spanish. “We told our audience that if you’re not bilingual, you are not going to understand half of what you hear,” said Lovett. Instead, they sat bilingual speakers throughout the event, so they could share what was being said in each talk. 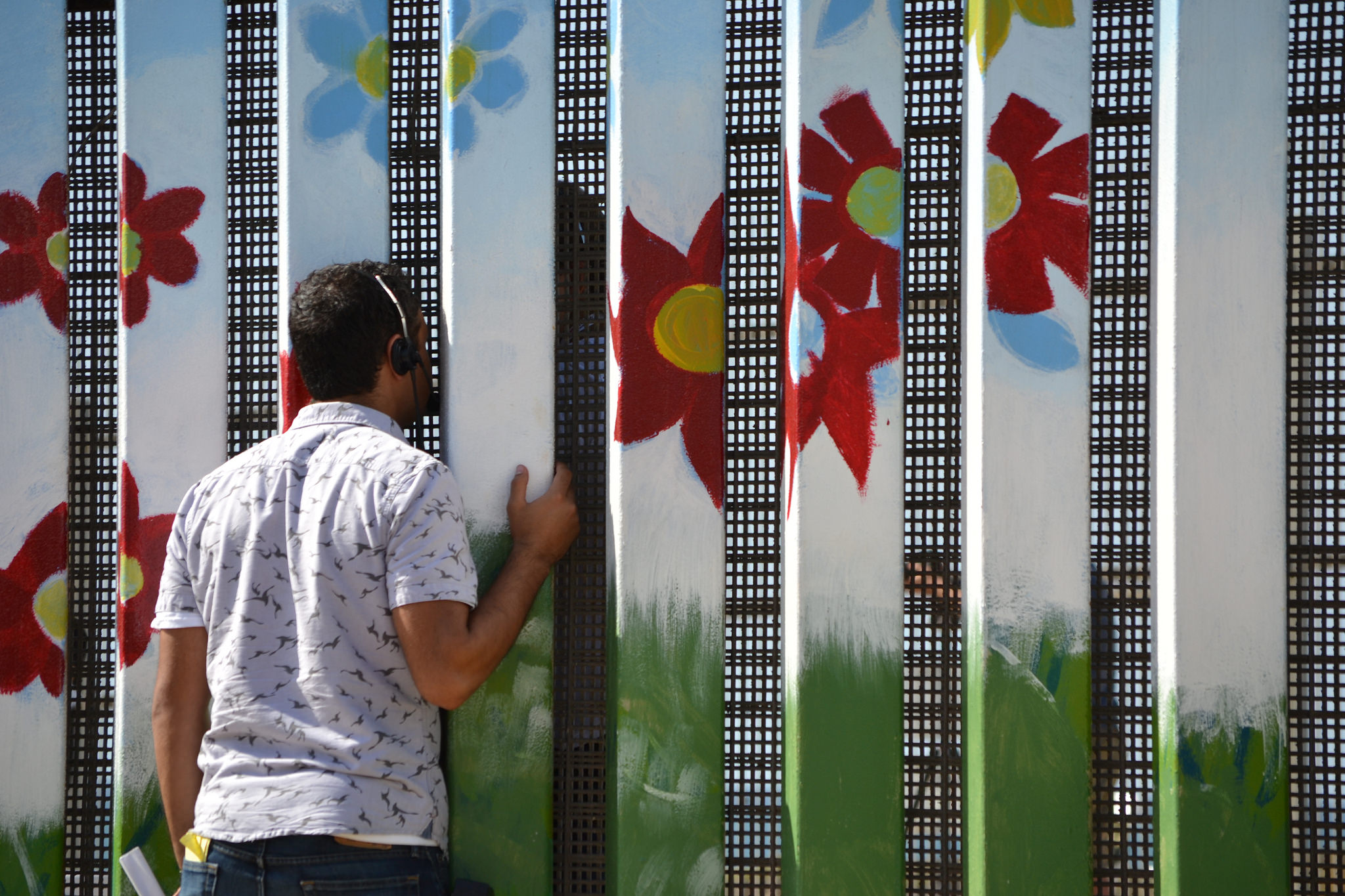 The coordination of the two sides happened through the most low-tech of methods: shouting through the fence. On the US side, the fence looks austere — but on the Mexican side, it’s painted with murals. Photo: Arturo Loaiza/TEDxMonumento258

The theme for the event came easily: “Ideas without borders.” Talks included a museum curator on how art transcends language, an attorney on the need for civic engagement across the border and a sommelier on how food allows for cultural exchange.

But everything ground to a halt 10 minutes before the event started.

“A guy in a powered paraglider comes swooping over the fence from Mexico into US airspace,” said Lovett. “Border Patrol freaks out — they’re on the phone trying to see if there’s a helicopter to chase the guy. An agent comes up to me and says, ‘We don’t know what this guy is doing. This is a danger. You need to shut down your event.’”

“As soon as he said that, the paraglider turned around and flew back into Mexico,” said Lovett. “So we didn’t have to stop the show.”

Together, San Diego and Tijuana have a population of nearly 5 million people. Both Lovett and Peterson see the cultural exchange between the two as key.

“If we could demonstrate how two cultures work through difficulties and challenges, that hopefully could be a model for people in other parts of the world.” 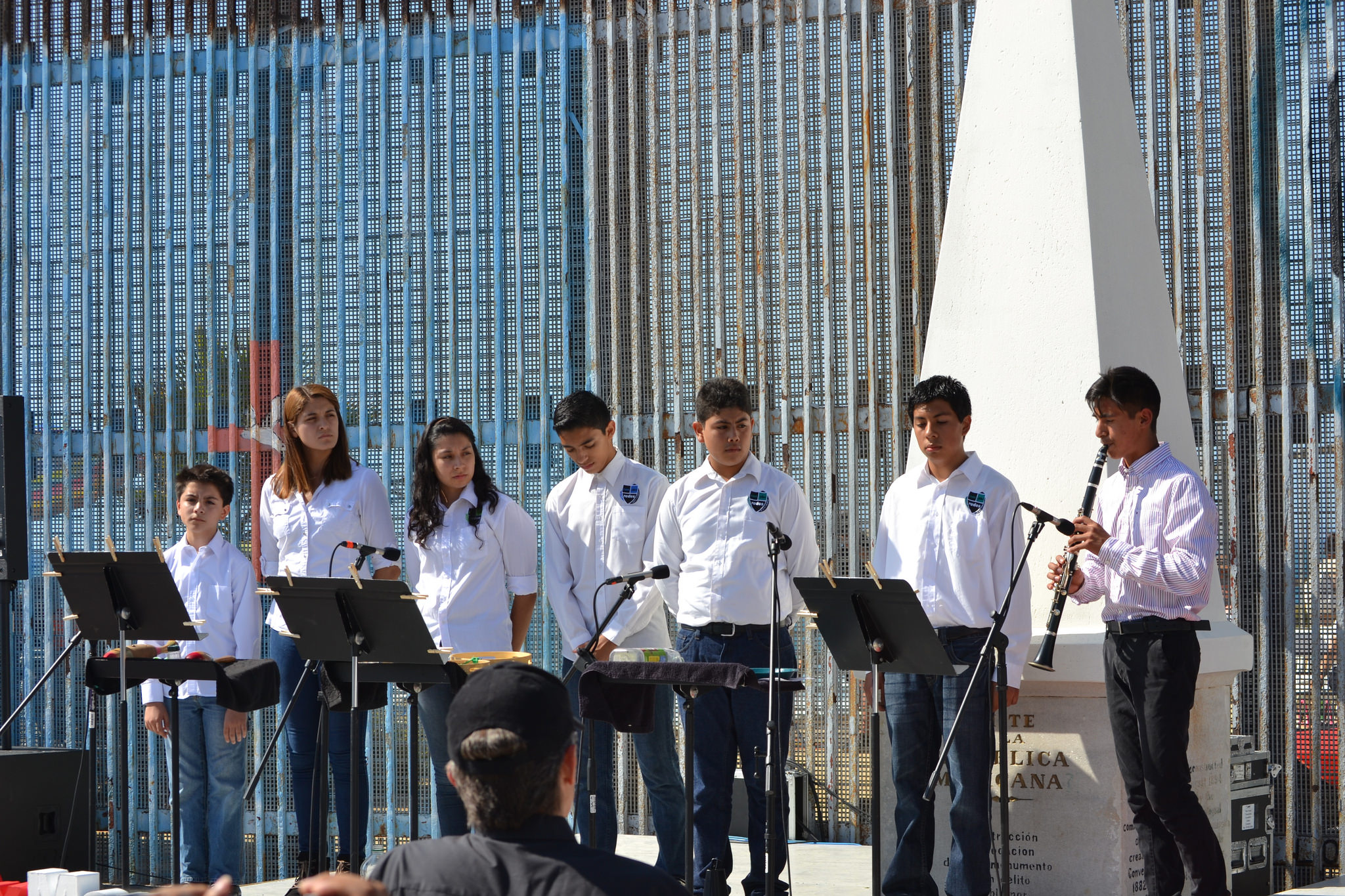 Students from Redes 2025, an after-school music program in high-needs communities, played a musical interlude. Clarinetist Missael Zavala Lopez (right) spoke before they played about his experience growing up in California and returning to Mexico when his mother was deported. Photo: Arturo Loaiza/TEDxMonumento258 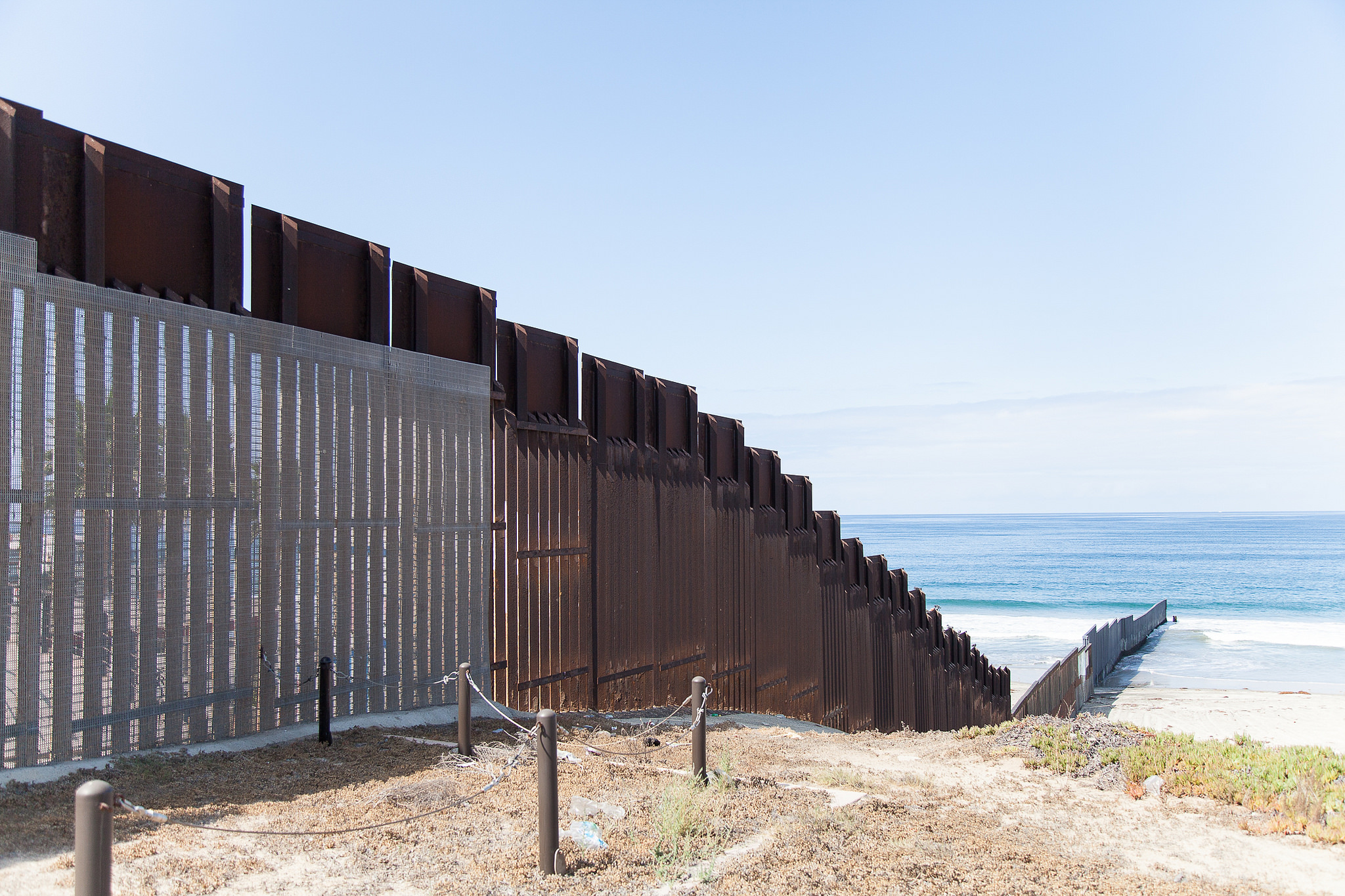