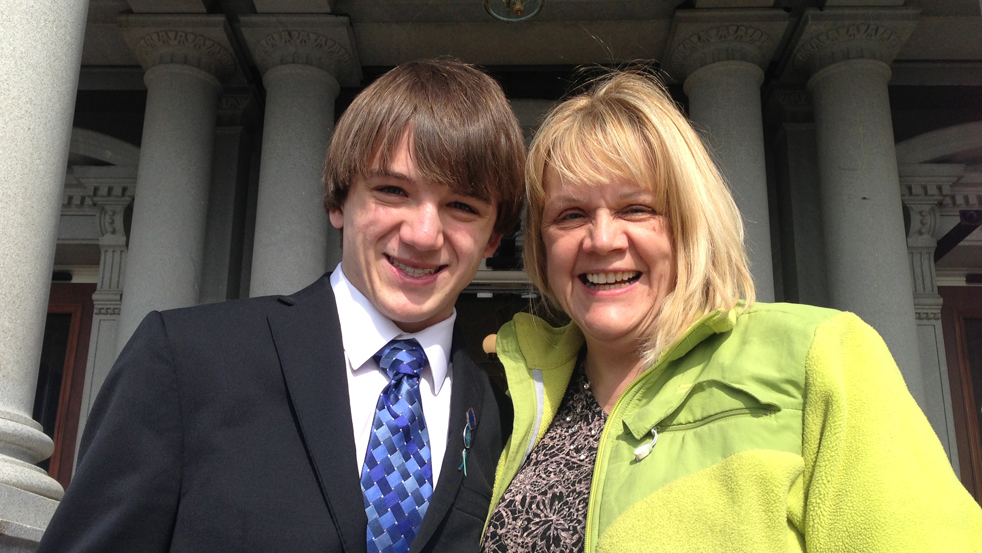 Teenage cancer innovator Jack Andraka stands proudly with his mom, Jane Andraka. In this Q&A, Jane shares how she encouraged her sons to be resilient in the face of rejection. Photo: Courtesy of the Andrakas

Jane Andraka has raised two remarkable sons. Luke, age 20, is studying electrical engineering at Virginia Tech. “He was always tinkering and taking things apart — wondering how they worked, wondering how they could be made better. He had ideas coming out of his brain like a firehose,” she says. Meanwhile, Jack, age 18, is a teen innovator and scientist who gained international attention when, three years ago, he created a promising method of early cancer detection. In a talk at TED2013 that’s been viewed nearly 4 million times, Jack Andraka shared the story behind the four-cent strip of paper that appears to be 400 times more sensitive in detecting pancreatic cancer than the previous standard — and that could work for ovarian and lung cancer too.

On the heels of the release of Jack’s memoir, Breakthrough: How One Teen Innovator is Changing the World, we spoke to Jane about raising two inspiring children — and how she’s doing it with dignity and a sense of humor.

You gave a talk at TEDxQUT about hijacking your kids’ education. What does that mean, exactly?

I saw all these kids who had made themselves into little hoop-jumpers. All of a sudden, for seniors in high school in October, it’s, “Oh, jeez, I need to join some clubs and get my grades up, and then I’ll go to Harvard.” And then whining, “Well, I got all ‘A’s, and I joined Model U.N.” But that’s just not what it’s about. You have to make your own self remarkable. Make them say, “Wow, this couldn’t be any other child.” Don’t be like everybody else.

How did you encourage creative thinking in your household?

I beat my head against the wall for years because I wanted to develop creative and resilient kids who were going to fulfill their own potential and not just be able to fill in [standardized test] bubble marks. But you can’t make a cat bark. I can’t make schools change, no matter how much I advocate and complain. So I gave up on that and said, “You know what? I’m not going to change that. I send them to school, they do whatever they’re going to do, and it’s not very challenging and it doesn’t promote creativity. And then when they get out of school, it’s time for parents to shine.”

By trying to guide them to a place where they can excel and find some measure of success. It really drives me crazy when parents say, “I just want them to be happy.” I want more than that. Sometimes being happy can be just laying around, but real happiness comes from fulfilling what you were meant to do. Struggling and succeeding. That’s a much cooler idea.

You talk about how it’s important to take initiative to hunt for opportunities for your kids. What did you do along those lines?

Jack says, “With the Internet, anything is possible.” Well, yeah — and he learned that from me. I would go online and Google programs like the Johns Hopkins Center for Talented Youth or science competitions. You ask yourself, “What is my child interested in? What are they good at? What’s this program or this book? What are they reading? What are they thinking about?” That will help inform your decisions. You might say to them, “There’s this wonderful international science competition; let’s learn more about it.” Then there’s validation — they can see that there are other kids like them out there. It would be the same if your kid were into sports or music — you get on the Internet and look, look, look, and see what other people are doing. See if your kid would fit into any of those molds.

What if a child doesn’t have a passion?

Kids don’t [really] know what they like, and so that’s your job [as a parent], to expose them to as much as you can. It doesn’t have to cost a lot of money. You can take them to the library and see what books they pull out. See what kind of skills they have. Your job as a parent is not to say, “Tell me what you want to be when you grow up.” Instead, if you just try everything and are super attentive — not in a helicopter-y, my-child’s-a special-snowflake way — you can be aware of what they gravitate to, and encourage them to do more of it. See if that light still shines in their eyes. Pay attention to what sparks them.

“Pay attention” is a powerful phrase. It’s easy to be in the same room with your kids and be multitasking or on your phone. I’m guilty of that, though I’m making a conscious effort not to do so.

It doesn’t have to be that you’ve got a semi-psychotic laser eye on them, or treat everything they say as if it’s pearls of wisdom. But when your child is sitting there thinking and goes, “Mom!” — you know, in that voice — it’s not about going to Toys ‘R’ Us and getting SpongeBob. It’s a question.

You encouraged your sons to keep “idea books.” Tell me about that.

It was all Luke’s fault. He generated so many ideas that he was making himself anxious. Was he ever going to be able to accomplish these ideas? Was he even going to be able to remember all these ideas? And I said, “Here is a dollar journal. Why don’t you just start writing.” He would sketch and then go, “But I don’t know how to do that.” And I’d say, “That’s fine. Get the idea down and then, as you learn more, you can reflect back.”

What do you think of Jack being called the “Edison of our times” by his mentor, Johns Hopkins pathologist and pancreatic cancer researcher Anirban Maitra?

I think Dr. Maitra a patient and wonderful man who has a soft spot for kids and giving them a chance. Those are very kind words; any parent would like to hear them. But when you go to science fairs and hear kids talking about their projects — I just have such optimism about the world. There are so many kids out there who are innovating, and they just need a chance to be heard and to learn how to communicate better. That’s the big thing that Dr. Maitra was picking up — Jack doesn’t mind putting in a lot of time. He’s very persistent, he’s very resilient, and he can communicate. He has that personality that people want to hear more about, just like Edison with his crazy hair. 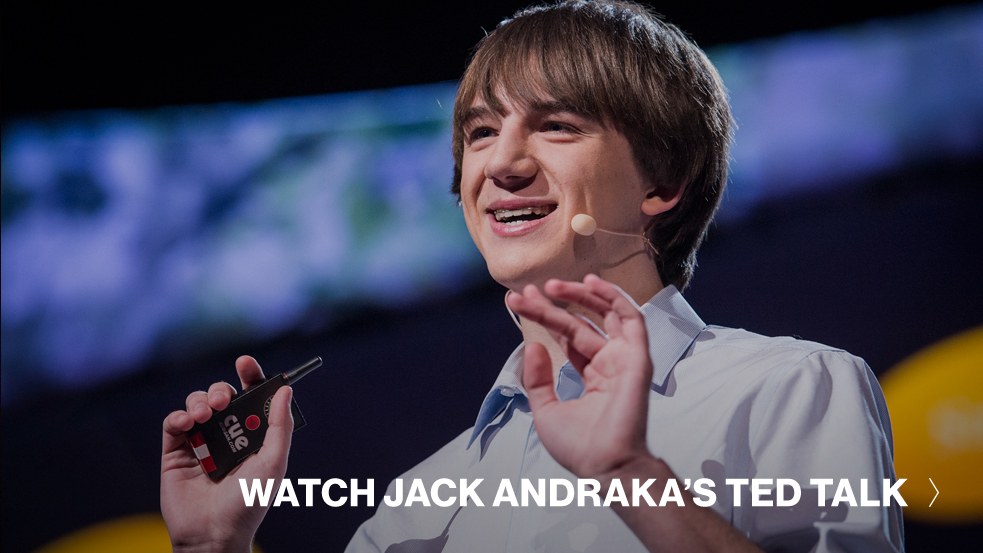 How did you feel when you first read Jack’s book, which covers, among other things, overcoming depression and homophobic bullying?

It was very painful. I was surprised by the depth of his depression. You send your child off to school, they come back, they’re moody, and you don’t know that he ate his lunch in the bathroom or that teachers were telling him that he was going to be a failure. You have no idea that he’s so lonely. You just think, “You’re 14 — of course you’re a disaster. Go to school.” I feel really bad about that. But kids are like oysters when they’re 11, 12, 13. The more you try to dig their feelings out, the more they’ll clamp down. You can’t beat yourself up too much.

Jack had to reflect on really personal things for the book, and I was concerned that it would stir up bad memories. He had to relive some of those experiences. But it was more like lancing the abscess — getting it out and realizing that you’re going to be okay.

The cool thing is that he’s getting emails from folks now who are like, “I was going to kill myself, I was feeling like there was no hope,” or “I was ashamed that I was gay and that nobody would like me, but I listened to you talk, and so I told my my parents.” That makes him feel much better about sharing his story.

Is it true that Jack got 200 “nos” from scientists regarding his cancer detection system?

Yes. He got a lot of “nos.” But that was the best thing ever because we’d talk about how he needed to have a snappy [email] subject line. I’d say, “Make me care, because I’m old and I’m tired.” You have to make me care quickly, or I will move on.

No, I hate those labels. I am just raising kids who have the tools to realize their own potential and to make their own way in the world and be competitive in this ferocious, ever-changing world.

At the end of the day, how would you describe yourself as a mom?

I’m hands-on but hands-off. I have a vision of the final results, but I’m willing to follow their lead on how to get there. I believe in their potential. That’s the kind of parent I am. I’m not satisfied until I see them working toward it. 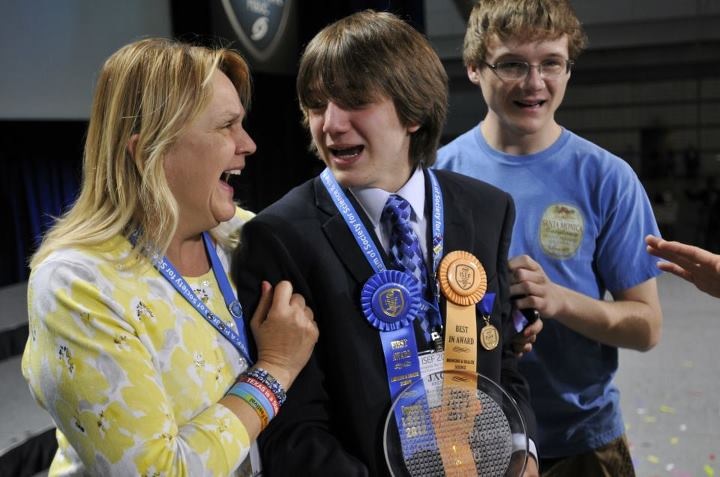 Jane (left) congratulates Jack (center) on his win at The Intel International Science and Engineering Fair. Photo: Courtesy of the Andrakas