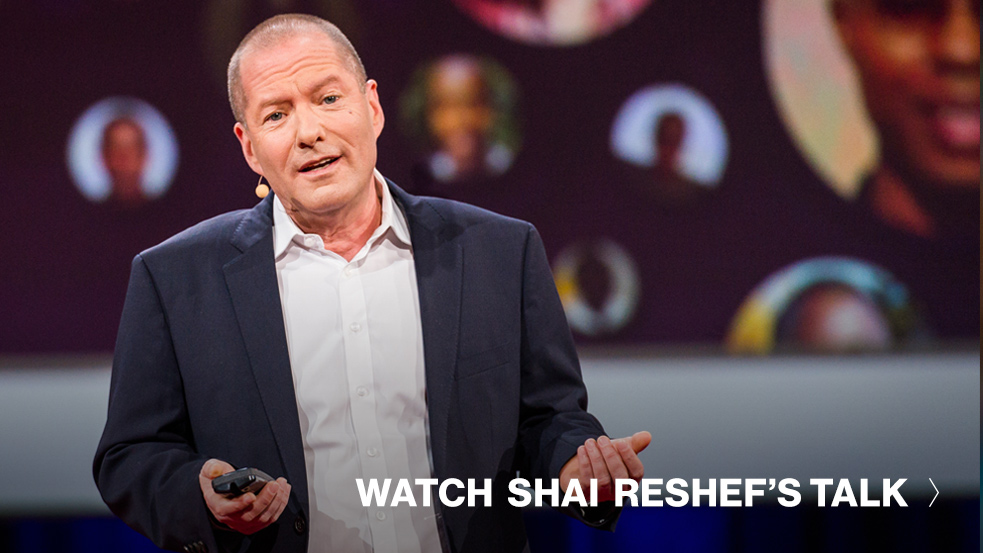 Shai Reshef’s nonprofit University of the People — which offers nearly tuition-free, accredited degrees online — today launches its first graduate degree, an MBA program in 12 courses. Although there are no tuition or textbook fees, there is a $200 testing fee per course, which means students can expect to pay $2,400 for their MBA (compare this to the average cost of tuition for an American MBA in 2016: $60,000). As Reshef told us: “In the last year and a half, we experienced tremendous growth. UoPeople grew from 500 enrolled students to over 3,000! We related a large part of the growth to TED — over 20 percent of the new students indicated my TED Talk as the place where they heard about the university.” Applications for the new MBA program open today, March 15, and will be accepted on a rolling basis. Learn more >>

In Rob Knight’s TED Talk, he mentions a startling experiment he tried on his own kid: After cesarean birth, he smeared microbes from the birth canal on his newborn, following an instinct that it would help pass along some of mom’s microbiota — and her immunities. Now, the science is starting to roll in, and it looks like his instinct was right. In a paper in Nature Medicine, Knight and co-authors show that the practice does indeed enrich the babies’ microbiota.

Jane McGonigal’s latest game? The 36-hour Learning Is Earning 2026, a game about the future of education that asks players to imagine a world where your learning is quantified on a ledger, “a kind of currency that ties together every aspect of our lives.” You can jump in now and read players’ imaginative and creativity-sparking ideas for future learning.

Back in 2014, TED Fellow Andrew Bastawrous demoed his Portable Eye Exam Kit (Peek) app on an audience volunteer (watch his TED Talk). Now, with trials complete, the phone-based eye test is going into use in Trans-Nzoia, in eastern Kenya, where some 300,000 students will get their eyes checked with this simple app.

Physicist Neil Turok, who just hosted the first Next Einstein Forum in Dakar last week, has been awarded the Tate Award for International Leadership in Physics, given by the American Institute of Physics. The award is given in part for his TED Prize wish: the African Institute for Mathematical Sciences (AIMS), a school to develop math and physics talent in African students.

On Longreads, anti-slavery activist Kevin Bales published “Your Phone Was Made by Slaves,” a shattering excerpt from his recent book Blood and Earth: Modern Slavery, Ecocide, and the Secret to Saving the World. The piece is illustrated by a single powerful image of enslaved Ghanaian miners from photographer Lisa Kristine.