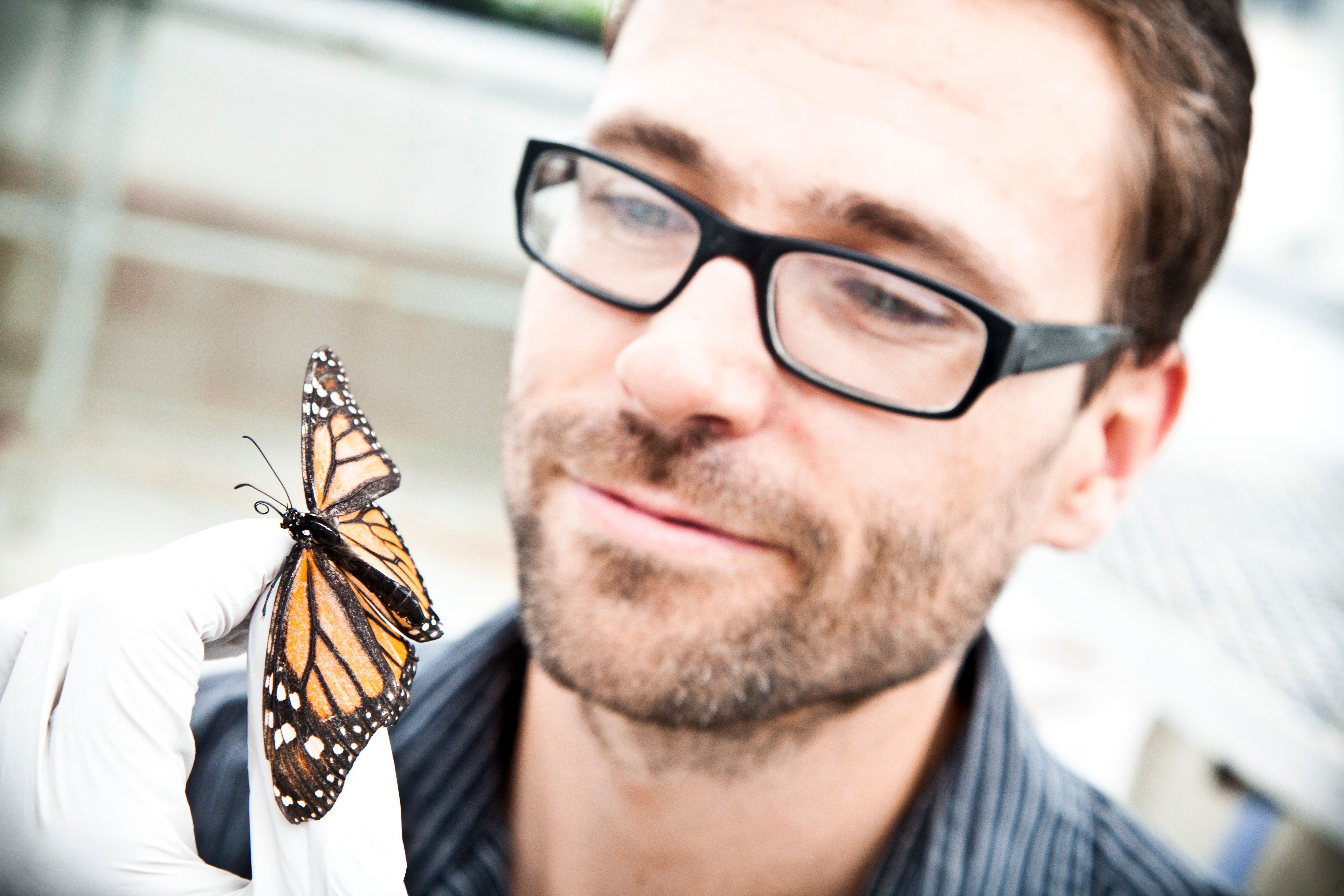 Lubna Batool, an 11th-grade New Yorker, was fascinated. On site at TEDYouth, with a dozen monarch butterflies flapping about in a see-through mesh cylinder, Batool got to ask de Roode a few questions. One fun fact she learned: Monarch butterflies can live in a food cooler for months, as long as they’re fed every 10 days and have an ice pack changed daily. Below, an edited transcript of their conversation.

[As Batool picks up a butterfly] How do I hold it?

Monarchs are one of the strongest butterflies we have — they fly from Canada down to Mexico, which is a few thousand miles. When I was growing up, my parents told me that you can’t touch butterflies because you can really disrupt their wings. But for Monarchs, it’s actually the best way to hold them — it’s their sturdiest part. My fingers are slowly getting covered in scales.

Do the scales regenerate?

No, they’re gone forever. They come loose for a reason. It’s actually a defense mechanism. Many butterflies end up in spider webs, but what gets stuck to the web is not the butterfly, but its scales. It can fly away, which is pretty awesome. My only advice is — don’t lick your fingers because you might get some of the scales in your mouth. Not enough to kill you, but it’s good practice to wash your hands after touching animals in general.

Why do you prefer to work with Monarchs over other butterflies?

We work with monarchs, and then do other research on honeybees and malaria parasites in humans. For me, I just find monarchs fascinating. Count its legs. There are four! Monarchs only have four legs. There should be six, because they’re insects. So what’s going on? The whole family of Monarchs in the butterfly world is called a “brush-footed butterfly.” They do have six legs, but the front two are very, very small — so small that you can hardly see them. They’re used for egg laying. So it doesn’t make sense at first sight.

How long do they live?

These particular butterflies can live up to seven months, because these are the migratory ones that go from Canada and the U.S. all the way down to Mexico. They fly down and sit there for four to five months, and then fly back north to, say, Texas. But normally when they’re breeding — when they’re not migrating in the winter — they only live three to four weeks. And the main difference between them is that the migratory ones haven’t fully developed their reproductive organs, and that saves them so much energy that they can live for a long time.

How can you tell when the butterflies are diseased?

What I do is I take this butterfly and I take this sticker — just a sticker like you’d buy at Staples — and I stick it on the butterfly. That will take some of the scales off of the abdomen. I put it on an index card like I’ve done here. And then you look under the microscope, and you see big black blocks and big white blocks — those are the scales of the butterfly. If it has the parasite, in between the scales you’ll see black, peppery speckles. Those are the parasites. That’s a diseased butterfly.

So what does the butterfly have that can cure its diseases?

It has milkweed. The adult butterflies lay eggs on milkweed, so the larvae feed on it, and some of the milkweed has this chemical that we think is bad for the parasites. So in using that milkweed, they’re basically using medicinal plants to reduce the infection from the parasites.

So it might be able to help humans and other animals?

Yes. So many insects use plants, and so many are probably using medicine. We could look to that and maybe find some new cool medicines. That would be really awesome if we could say, “Look, these butterflies found some cure for us.” That’s my dream.