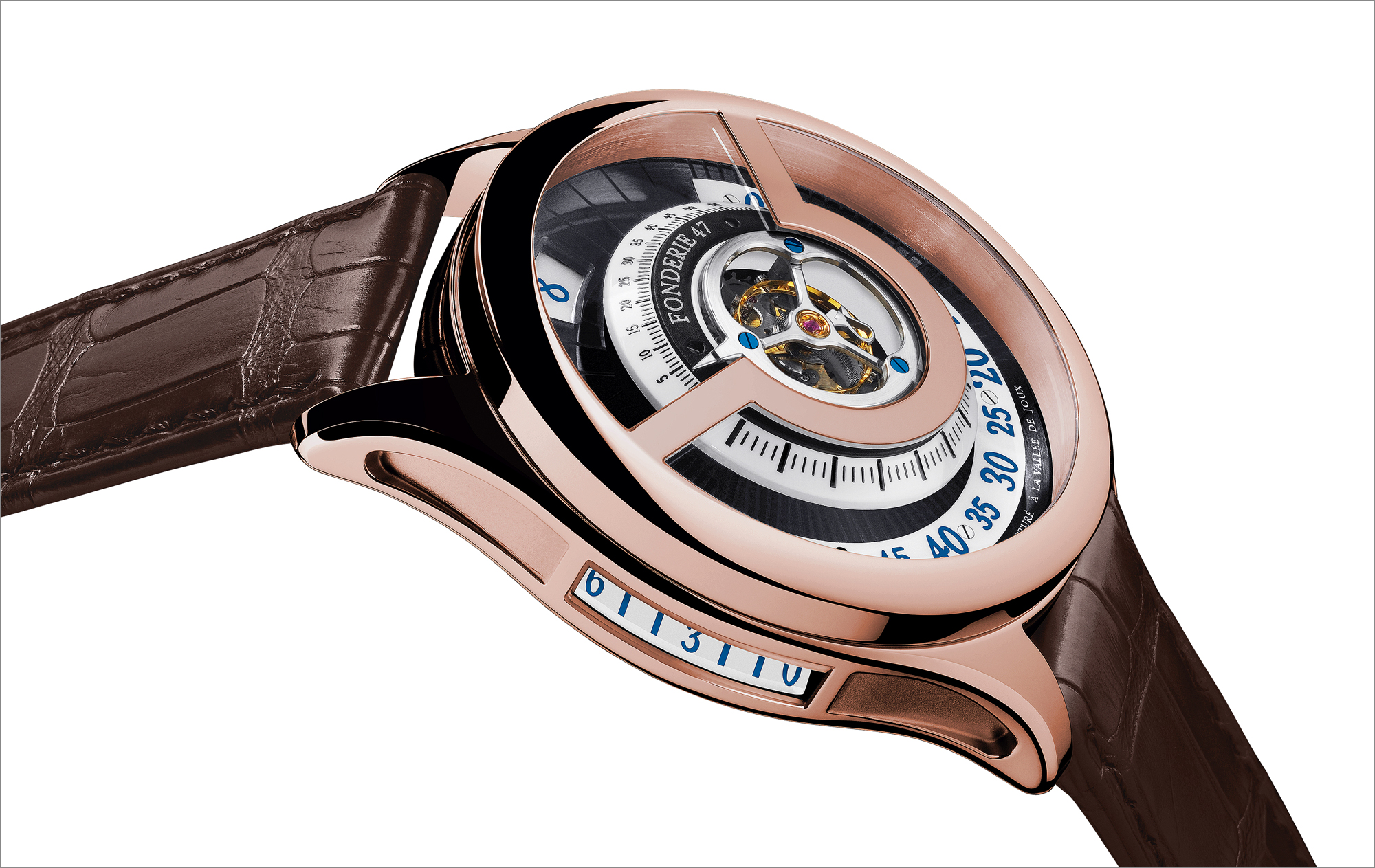 The metal in this watch was once an AK-47. Through the company Fonderie 47, social entrepreneur Peter Thum has helped decommission 45,000 of these assault rifles in Africa. Photo: Courtesy of Fonderie 47

The watch looks both futuristic and retro at the same time. A swirl of visible gears and carefully calibrated dials, it charts time in an unusual way — the hour jumps into place at the top, the minute is marked in a semicircle along the bottom, and the seconds swoop above. It’s a statement watch, the kind of piece that people inevitably ask about.

This watch — which at $195,000 is no small investment — comes in a rose or white gold finish. But the metal underneath has a history. Before being crafted into a high-end timepiece, this metal formed an AK-47. Each watch has the serial number of the weapon destroyed to create it displayed across the side. And each purchase funds the destruction of an additional thousand assault rifles in Africa.

This watch was dreamed up by social entrepreneur Peter Thum, the founder of Ethos Water and a TED attendee. Thum calls the AK-47 “the most infamous and destructive gun in the world” and through the company Fonderie 47, he transforms these weapons into jewelry — rings, cuffs, earrings, necklaces and more. The watch is the company’s pièce de résistance.

The idea for Fonderie 47 was born out of a chance meeting at TED2009, when Thum struck up a conversation with fellow entrepreneur John Zapolski. “We met in between sessions in the lobby,” Thum remembers. “Like a lot of people at TED, you meet in the hallways — and then they become people that you know and interact with for the rest of your life.”

As the two talked, they discovered that they had both recently traveled to Tanzania. “I don’t remember how we got to this topic, but the subject of security and guns came up,” says Thum. “We were talking about the AK-47, and we both said, ‘We should talk about this more.’”

The AK-47 is a gun designed by Mikhail Kalashnikov for the Soviet military in 1947. While it has become one of the most widely used shoulder weapons in the world, in Africa it is especially prevalent. Because of its low cost, ease of use and long-term durability, the AK-47 has become the gun of choice for rebels, militia members and terrorists in Africa. (An interesting watch: the PBS Frontline special, “On the trail of an AK-47.”) In April, Al-Shabaab gunmen used AK-47s in a horrifying attack on a university in Kenya that left 148 people dead. The curve of the AK-47’s magazine has become eerily iconic in images from conflict regions. 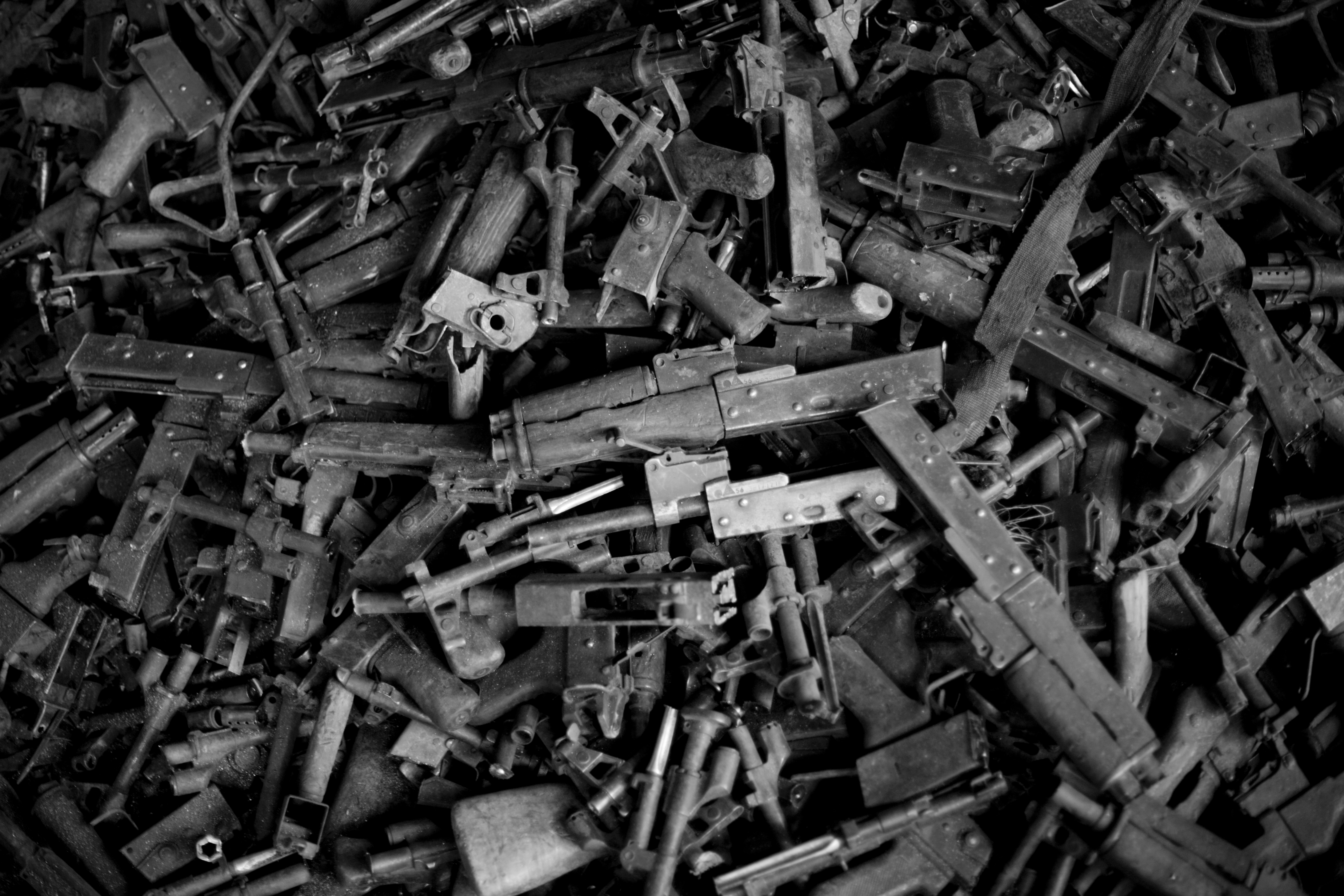 A stockpile of AK-47s and other assault rifles. Thum makes these weapons the raw material for something beautiful. Photo: Moises Saman

Both Thum and Zapolski were concerned about the proliferation of assault rifles in Africa and wanted to come up with an idea to take AK-47s specifically out of circulation. They wondered: could they transform these weapons into something benign — even something beautiful?

“John was thinking about an art installation. I said, ‘I think we should try to make it into something that would live in the world, something that would be a part of people’s lives and that would get talked about,’” says Thum. “The idea evolved from there … We focused on watches because they are also mechanical — but at the opposite end of the spectrum in terms of things that human beings make … The AK-47 is not a refined thing. Swiss watchmaking, at its highest levels, is probably one of the most refined things that human beings do. So it seemed compelling to take this object that was about death and destruction and make it into something that was also a machine, but one of beauty.”

Creating this watch ended up being a much bigger challenge than Thum and Zapolski, who left the company in 2012, originally imagined.

“It might have taken us longer to finish the first watch than it took Michelangelo to paint the Sistine Chapel,” says Thum. (History buffs will note that is almost true, though not quite.)

The first issue: figuring out how to get AK-47s in an ethical way. The solution came in 2011, when Thum got permission to transform AK-47s confiscated in Virunga National Park in the eastern part of the Democratic Republic of the Congo. This stunning park is in the North Kivu province, a seat of conflict since 1998. 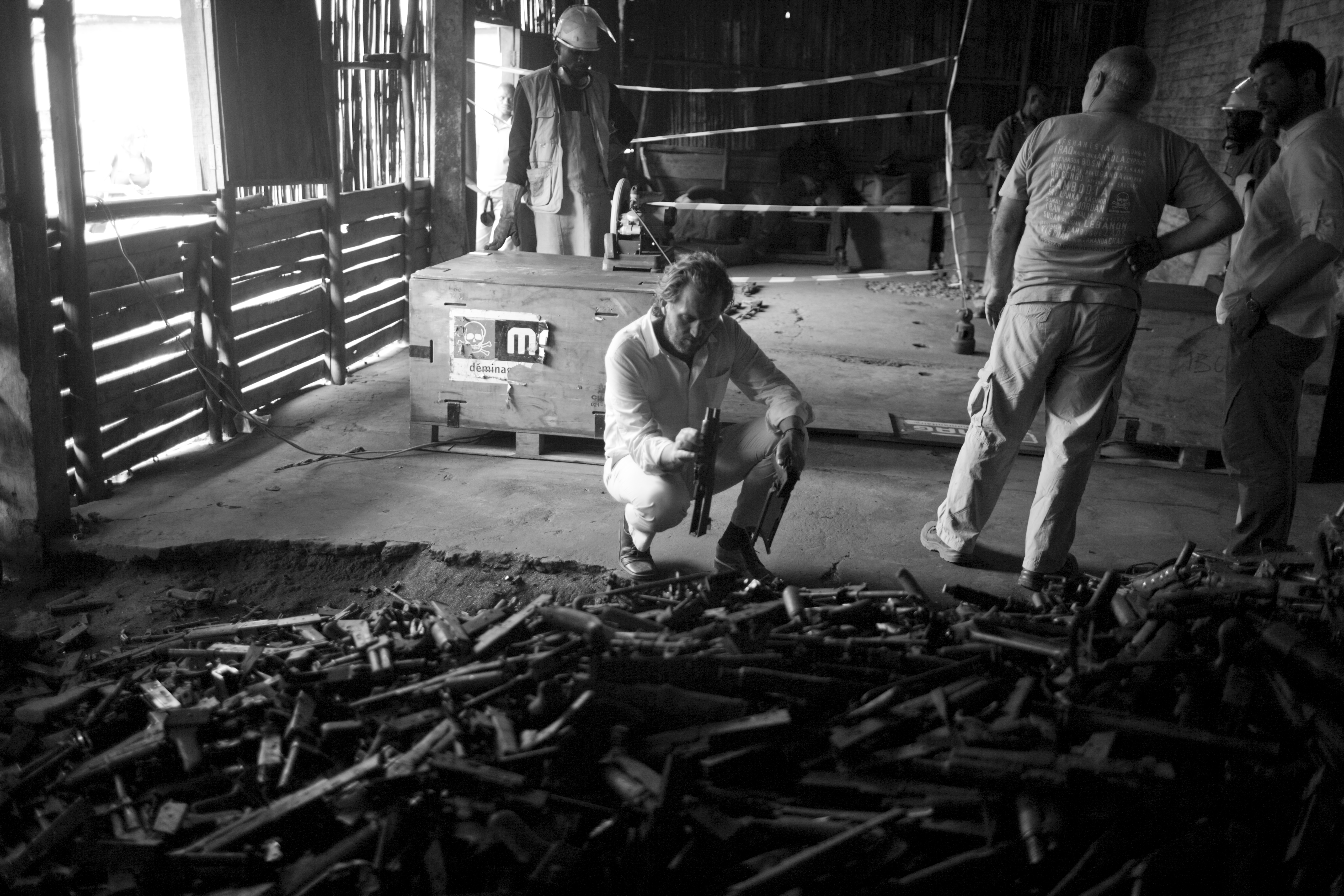 The next hurdle: getting the AK-47s to the United States, which has strict laws about the import of weapons. “We made a lot of different attempts and tried a lot of different angles, all of them legal,” says Thum. The solution: destroying the weapons locally and then transporting them. “We brought them back in our luggage,” recalls Thum. “We brought them across the border of the Congo and Rwanda, and then checked our bags at the airport in Kigali and flew back to New York.”

And yet, this method led to another challenge — finding people who would work with the material. “The steel looked like junk,” says Thum. “People who make luxury jewelry and watches are accustomed to working with materials that are easier to work with — precious metals like 18-karat gold and 24-karat gold that are soft and have low melting temperatures, With steel, the melting temperature is much higher. Their equipment isn’t really built to work with it.”

Thum found an initial collaborator in a friend of a friend, a blacksmith who proposed building a forge to heat the steel to a high temperature. He then pounded the metal using an anvil and hammer into molds, in order to create usable parts. Because the effects of the economic recession were still being felt at the time, Thum says he actually had an easy time finding factories willing to take the project on.

Thum landed on the name Fonderie 47 — “fonderie,” because it’s French for “foundry,” and “47” for “AK-47.” In 2011, he began talking to investors — including many from the TED community — and offering the first products.

The brand has grown steadily ever since. James de Givenchy created a collection for Fonderie 47, and the watch was designed by Adrian Glessing and produced by Swiss watchmaker David Candaux. Every purchase funds the destruction of more AK-47s.

“As of the end of last year, we destroyed a little over 45,000 assault rifles in [the Congo and Burundi],” says Thum. 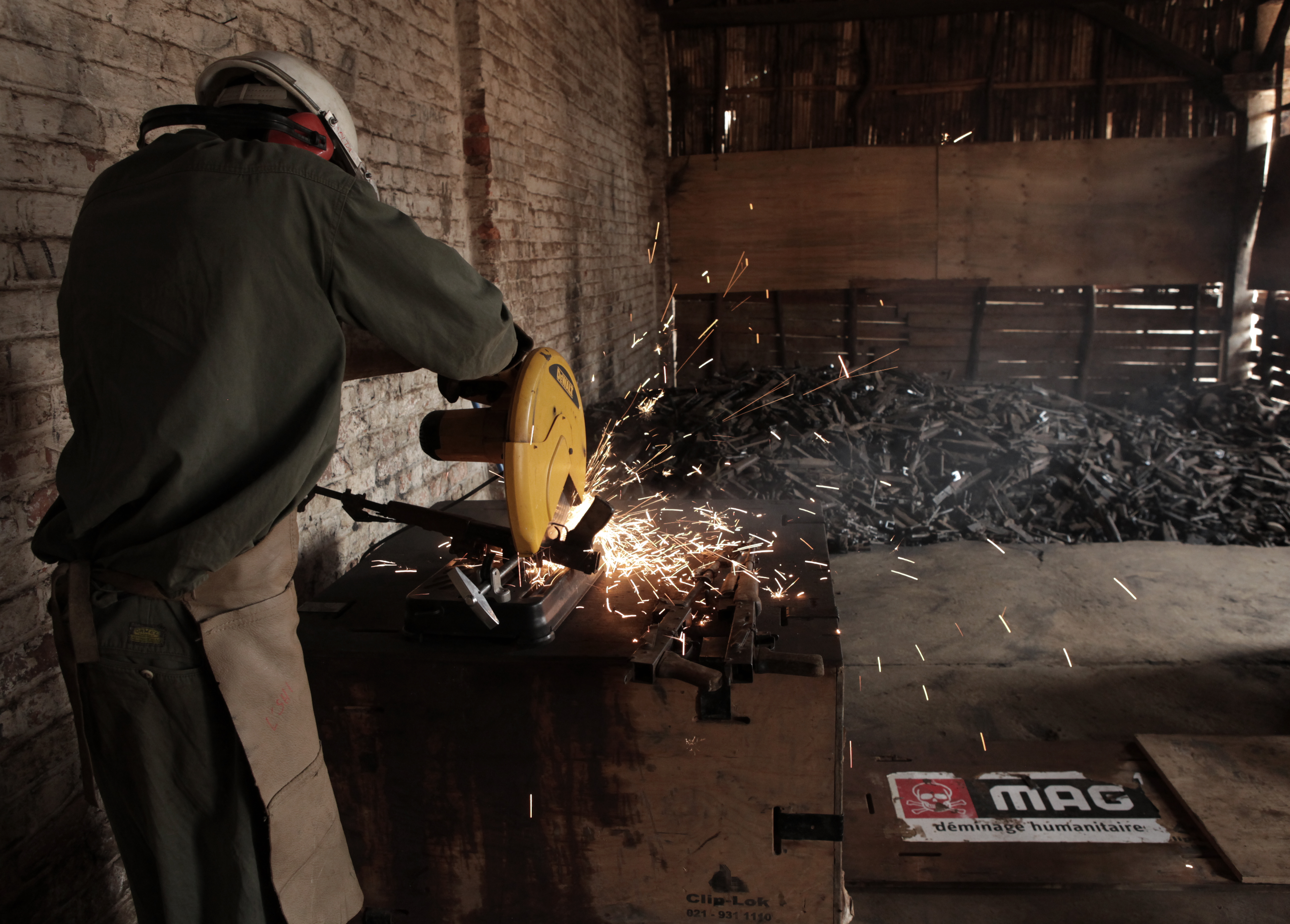 The real value here is that these guns are unlikely to be replaced. “There’s a significant difference in the economic value of the AK-47 in Africa versus the global trading price,” says Thum. “The upper end of the price range for an AK-47 type weapon is $534 and the lower end of the range is $349. So if you look at the value of 45,000 AK-47s that are legacy weapons, it would cost between $15 and $24 million to replace them.”

In the summer of 2012, Thum and his wife, actress Cara Buono, had the idea to take things a step further and create products made out of weapons secured in the United States. They founded a new brand, Liberty United, to make pendants, charms and rings.

“The idea was very similar,” say Thum. “We partnered with American cities and police departments to give us guns from buyback [programs] or evidence that had been released from crimes. We take guns and bullets as material and transform it.”

So far, Liberty United is working with police departments in Philadelphia, Pennsylvania; Syracuse, New York; Cook County, Illinois; and Newburgh, New York. The price of these pieces tends to be lower, and the design is overseen more tightly by the company, as fabrication is done in New York and Rhode Island. 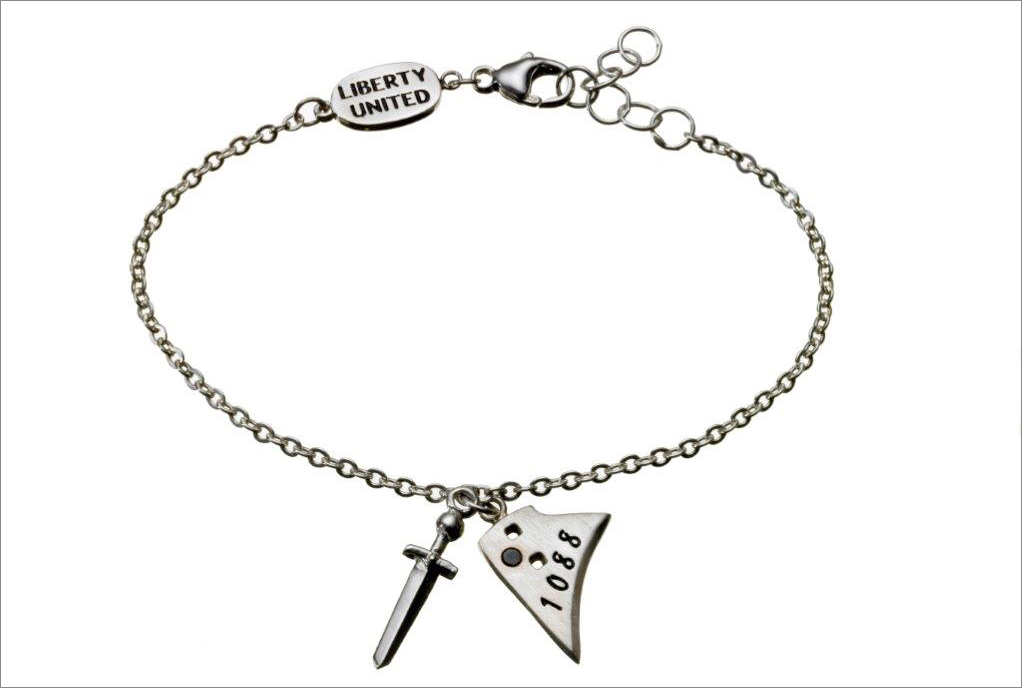 Liberty United is a different spin on the same idea—this line of jewelry is crafted from the metal of weapons collected by buyback programs in the United States. Photo: Courtesy of Liberty United

Both companies physically transform weapons. But beyond that, both also have at the core of their business model funding further work to defuse violence. Fonderie 47 gives financial support to Mines Advisory Group (MAG), a Nobel Peace Prize laureate that secures and destroys weapons in Angola, Cambodia, the Congo, Libya and Iraq. And Liberty United funds a variety of youth education programs in cities, including the Philadelphia Anti-Drug/Anti-Violence Network’s Youth Violence Reduction Partnership and the Syracuse Model Neighborhood Facility’s Journey 2 Manhood Program.

This makes sense, as Thum is one of the pioneers of the social entrepreneurship movement. “When I first came up with the idea for Ethos Water in 2001, there was almost no information about companies like this,” says Thum, noting that Ben & Jerry’s, Newman’s Own and The Body Shop were virtually the only companies out there with a social good component at the time. “We’ve gone from very few of these companies as examples to almost every college and business school having courses taught on social entrepreneurship.”

The fact that people are learning about social entrepreneurship has the domino effect: it gets people interested in starting these businesses, creates more demand on a consumer level, and pushes large companies to enter the arena too.

Ethos Water got Americans to think about the global water crisis in a way many hadn’t before, says Thum. “It was a tool that used consumerism to flip a switch in people’s minds about the importance of the issue by getting them involved at a very light-touch level,” he says. (Watch his talk on social entrepreneurship from TEDxSMU below.) “The idea for Fonderie 47 is similar. The gun issue in Africa is one that hasn’t received the same kind of attention in the United States as other issues. I think in large part because it’s complicated and not easy to solve.”

He continues, “The good thing about the growth of this field of people becoming social entrepreneurs — whether they are doing so in a pure non-profit environment, a pure for-profit approach, a hybrid business, or by trying to alter large organizations — is that each idea can be viewed as an experiment.”

He’s excited to see what happens with Fonderie 47 and Liberty United. “The more experiments you run, the more people you have trying, the more likely it is that one of those people will come up with a recipe that makes a change.”