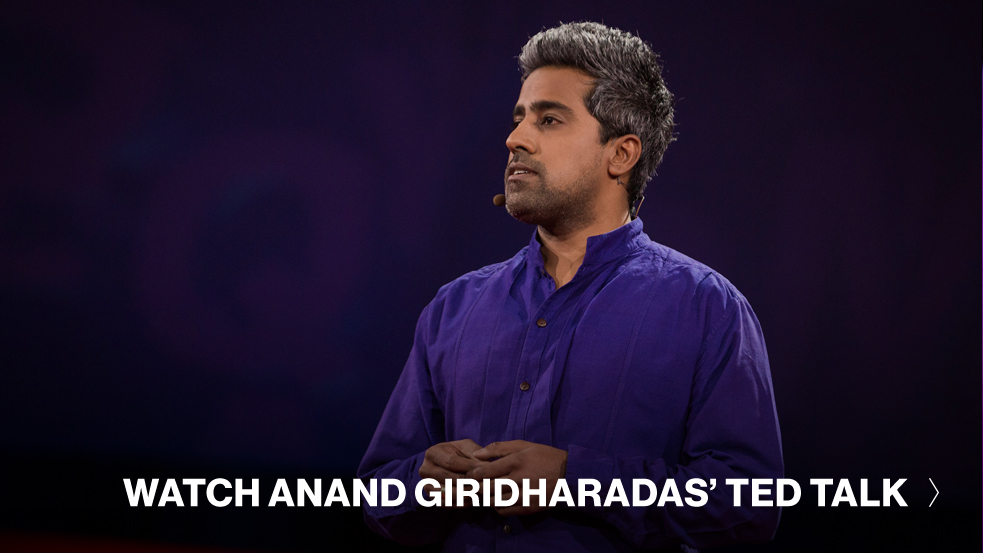 The TED community always has lots of news to share. Below, some highlights from the past two weeks.

Lessons for the South — from Germany. “Can the American South, still grappling with the legacy of slavery and segregation, learn something from Germany’s grappling with Nazism?” Anand Giridharadas asked this question of four scholars who study both places. The takeaway: in Germany, a sense of “collective responsibility” has led to public memorials of tragic events, while in the South, public remembering is tinged with nostalgia for a lost cause. The “self-critical memory culture” of Germany allows for remembrance of unsettling events, like a memorial to a neighborhood where murdered Holocaust victims once lived. For a Southern equivalent, Anand points to an idea from TED speaker Bryan Stevenson: “holographic memorials that pop up and deliberately startle passers-by at sites where lynchings occurred.” (Watch Anand’s TED Talk, “A tale of two Americas. And the mini-mart where they collided.”)

An organic computer made of … animals. At TEDGlobal 2014, Miguel Nicolelis shared his research on a brain interface that lets two rats — or three monkeys — cooperate to solve problems together. This month, he and his colleagues published a paper in the open-access journal Scientific Reports to expand on the concept of the “Brainet.” The paper describes an initial model, interconnecting the brains of four adult rats, that shows “the core of a new type of computing device: an organic computer.” As Nicolelis told Motherboard, “These computers will not do word processing or numerical calculation or internet searches; they will be tailored for very specific tasks. It’s a totally different kind of vision for computation that we’re not used to.” (Watch Miguel’s TED Talk, “Brain-to-brain communication has arrived. How we did it.”)

A grant for the StoryCorps app. StoryCorps has won a $600,000 grant from the Knight Foundation to improve its app, which lets users record interviews on their mobile devices. The app was launched into public beta with the 2015 TED Prize; the Knight grant will be used to add new features, like social tools for interviewing people far away. (Watch Dave’s TED Prize talk, “Everyone around you has a story the world needs to hear.”)

And the first StoryCorps app marriage proposal. On July 8, Rory Miller asked his girlfriend, Asya Adcock, to marry him, while the two recorded an interview on the StoryCorps app. Sitting in their Tennessee home, Rory begins, “This last question basically says, ‘Take time to tell your interview partner what they mean to you.’ So I’m going to say to you: I absolutely adore you. You are easily the best thing that ever happened to me in any way, shape or form.” Check out an excerpt of the interview to hear him ask the question — and to hear Asya’s response.

African music in the digital age. In a fun Q&A with Paper, TED Fellow Bill “Blinky” Sellanga talks about how South African house music and guitar-heavy Kenyan songs are finding new global audiences online. “The grooves that African music has are insane,” he said, “and just waiting for innovative producers and musicians to merge both worlds to get people on their feet.”

Have a news item to share? Write us at blog@ted.com and you may see it included in this biweekly round-up.