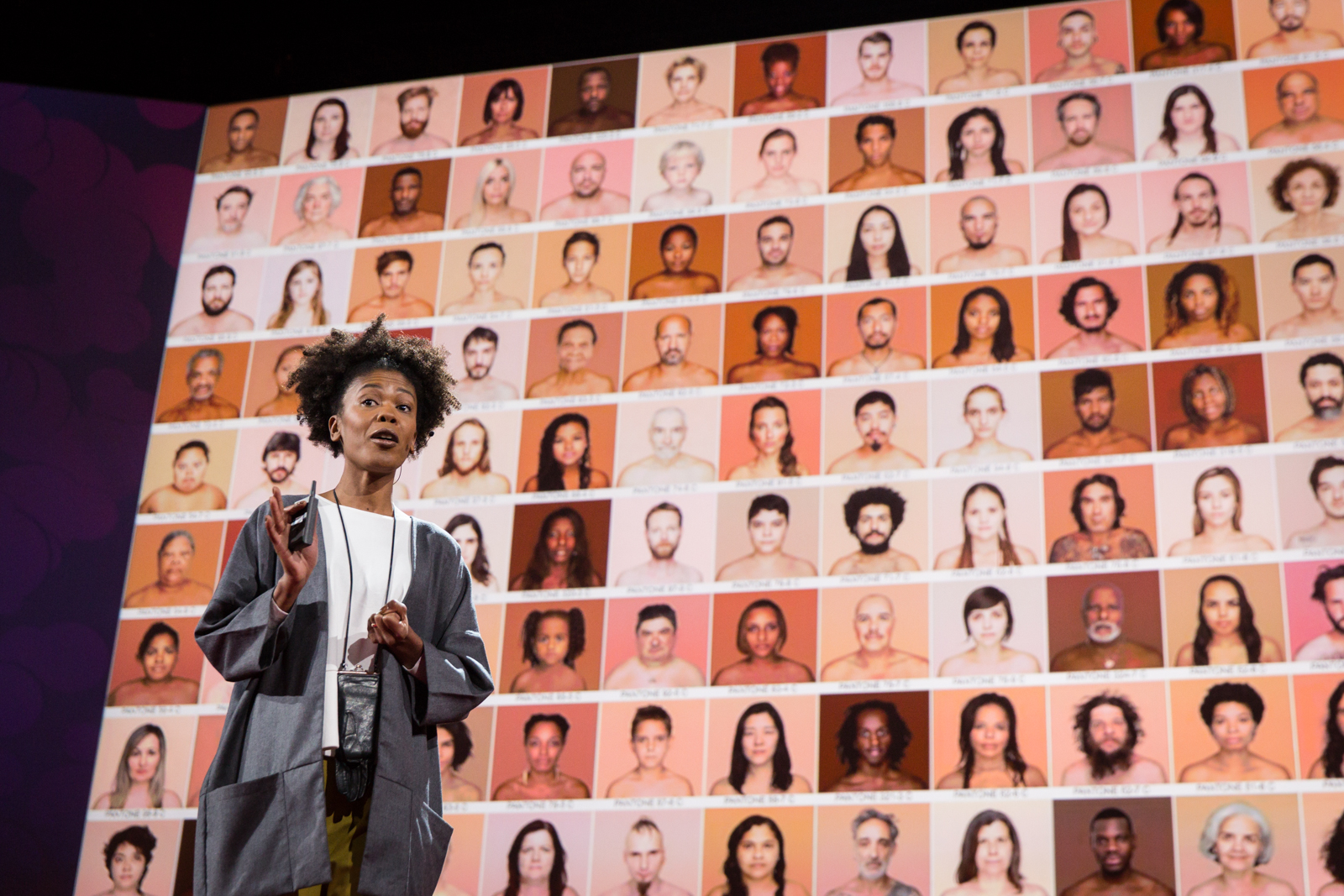 Angélica Dass stands in front of a collage of her work. She photographs people, pinpoints their skin tone, and places them on a color chart. She spoke onstage at TED2016 on Thursday, February 18, 2016. Photo: Bret Hartman / TED

“We still live in a world where the color of our skin not only gives a first impression, but a lasting one,” says artist Angélica Dass.

Dass is from Brazil, and her family is “full of colors.” She describes her father’s skin as “deep chocolate.” He was adopted by her grandmother, whose skin is “porcelain,” and her grandfather, whose skin is “somewhere between vanilla and strawberry.” Her mom is “cinnamon.” Her sisters are more “toasted peanut.”

In her family, color wasn’t an issue. But outside her home it seemed to be. She was confused. “I was made of flesh, but I wasn’t pink. My skin was brown, and people said I was black,” she says. “I was 7 years old with a mess of colors in my head.”

As an adult, when Dass went out with family members or friends, she was mistaken for the nanny or “treated like a prostitute.” Once she was “invited” not to use the main elevator because of her skin color. Meanwhile, she added a new shade to the family, as she married a Spaniard with a nose the “color of lobster” when sunburned.

She came up with an idea to explore skin color and identity in photography. She developed Humanae, a catalogue of real skin colors, a sort of Pantone scale for skin tones. “Humanae is the pursuit to highlight our true colors,” she says.

Dass photographs her subjects with bare shoulders on a white background, and later changes the background to match five pixels on their nose. The effect is like paint chips of creams, tans and browns. “What does it mean for us to be white, black, red or yellow? Is it the eyes, the nose, the mouth, the hair — or does it have to do with our origin, nationality or bank account?” She sees Humanae as a way to “question our codes.”

So far, Dass has photographed more than 3,000 people in 13 countries for Humanae. The project has gotten a lot of press, and many who see it write Dass to tell her what it means to them. “I realized that Humanae was useful for many people,” she says. “It represents a sort of mirror for those who cannot find themselves reflected in a label.”

Humanae images have appeared on the cover of Foreign Affairs along with the headline, “The Trouble With Race.” Scientists are using it for work on ethnicity. But most important to Dass, teachers are using it to educate students.

“These portraits makes us rethink how we see each other,” she says. But they are meaningful on a personal level too.

“Every time I take a picture, I feel like I’m sitting in front of a therapist. All the fear, all the frustration and loneliness that I once felt becomes love.”