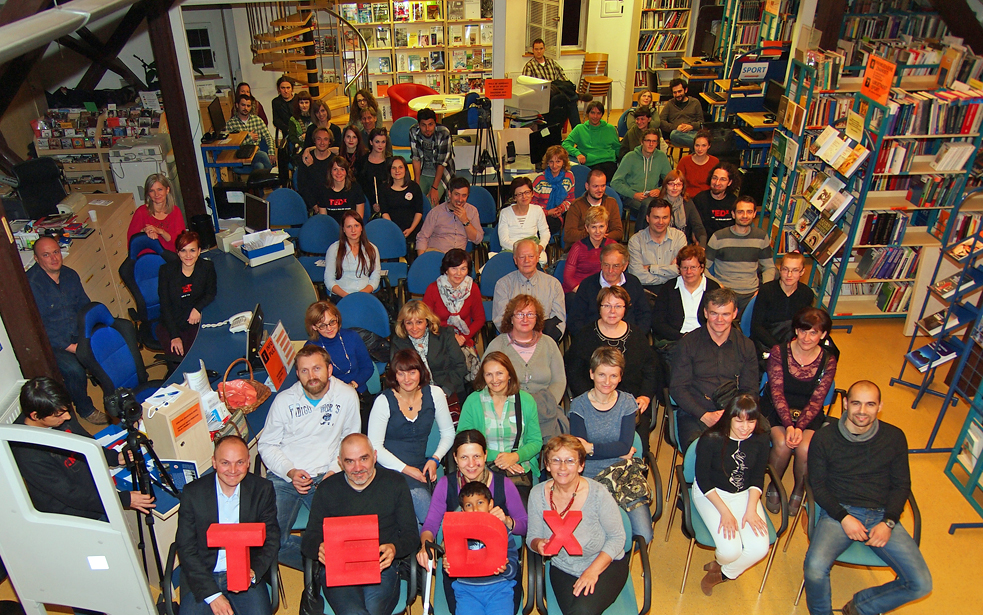 When architect Joshua Prince-Ramus redesigned the Seattle Central Library, he and his team didn’t try to pinpoint the future of libraries or books. Instead, they rooted their blueprints in two foundational ideas: books are a form of technology, and the library is a social hub, as much as it is a house for media. Prince-Ramus didn’t know it then, but he had the right instinct. Eight years later, libraries around the world are adapting to a digital world by embracing their identity as a center for a community. One way they’re anchoring their new identity: by organizing TEDx events.

There are three public libraries in Juneau, Alaska: a haven in the middle of a shopping center, an outpost housed with the local fire department, and a main branch atop a parking garage overlooking the Gastineau Channel. Robert Barr, the director for all three, was interested in organizing a TEDx event because the platform intersected with the library’s mission to foster a civically-engaged community. “Libraries are well-suited for the work of civic engagement because we’re one of those spaces in the community that value objectivity and neutrality,” he says. Barr saw the Juneau Public Library as the perfect space for community members to openly discuss, debate and absorb challenging and complex issues in society, brought up in TED Talks.

For the first TEDxJuneauLibrary, held in the downtown location, Barr chose the theme “Happiness,” pairing Malcolm Gladwell’s argument for the nature of choice with Dan Gilbert’s research on the science of happiness and Ben Zander’s passion for classical music. After the viewing, attendees excitedly discussed their own personal definition of happiness.

Since then, the monthly events have continued in this format, covering a broad range of topics from communication to success, education to creativity.

“As technology becomes more and more prevalent in our daily lives, it’s easier and easier for us to only interact with people who think like us,” says Barr. “For our democracy and our way of life to function, we need to develop skills of compromise and consensus building by working with people — thinking with people, talking with people — that are a little out of our comfort zone.” 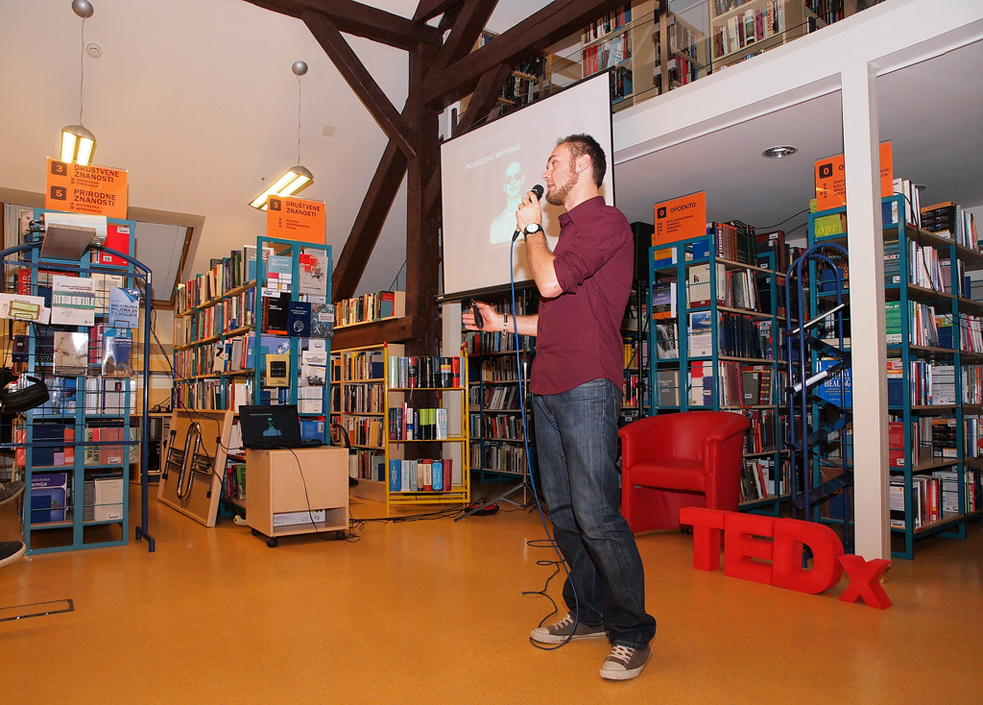 Petar Lukačić organizes TEDxKoprivnicaLibrary in Croatia, the only TEDx event in a library in Europe. He echoes Barr’s thoughts on the role of a library. “They are open to everyone and provide services that support formal and informal learning,” he says. Libraries are not just about lending books, they are “centers of communities” that foster life-long learning, he says. Before they knew about TEDx, Lukačić and his team had begun screening TED Talks along with other educational videos to a small group of library regulars. When they found out about the TEDx program, they applied for a license. From that point, they began to bring in local speakers in addition to screening talks from the TED Talks library.

All the TEDxKoprivnicaLibrary events have one shared theme, says Lukačić. “We guide ourselves with this motto: Great ideas in a small town.” At a recent gathering in May, one of the speakers painted a wall mural of a quote by Fran Galovic, the Croatian poet. At least 80 visitors attended, and it was the first time speakers came in from outside the local community.

Across the globe, in a library in a small town in Goderich, Canada, Christa Lehnen has been organizing TEDxGoderichLibrary since 2012. “Anyone is welcome to attend,” she says. The events are advertised in the library guide and, like Barr’s events in Juneau, these events focus on open discussion after the screening of a few TED Talks. Over the years, TEDxGoderichLibrary has covered themes like online collaboration, language and technology, happiness and education.

To Lehnan, libraries exist to provide informational and recreational content, and the formats those come in are evolving rapidly. “We have databases, video games, online videos/periodicals/magazines/and ebooks, which can be accessed outside the library anytime,” she says. TEDx events are a new format for content that lets people walk away with new ideas and perspectives, she says, and that helps them in their quest to be better informed.

Lukačić believes it’s precisely this “digital divide” that will bring the focus of public libraries back to being the center of the community. “We can talk about e-books and information available via Internet, but are all of these things available to everybody?” he asks. “You have to have an e-reader to read an e-book, you have to pay Internet access and have a computer, tablet, laptop or smartphone to access information online. What about the people who don’t have that?” The beauty of libraries, he says, is that—if they adapt—they can bridge those divides. 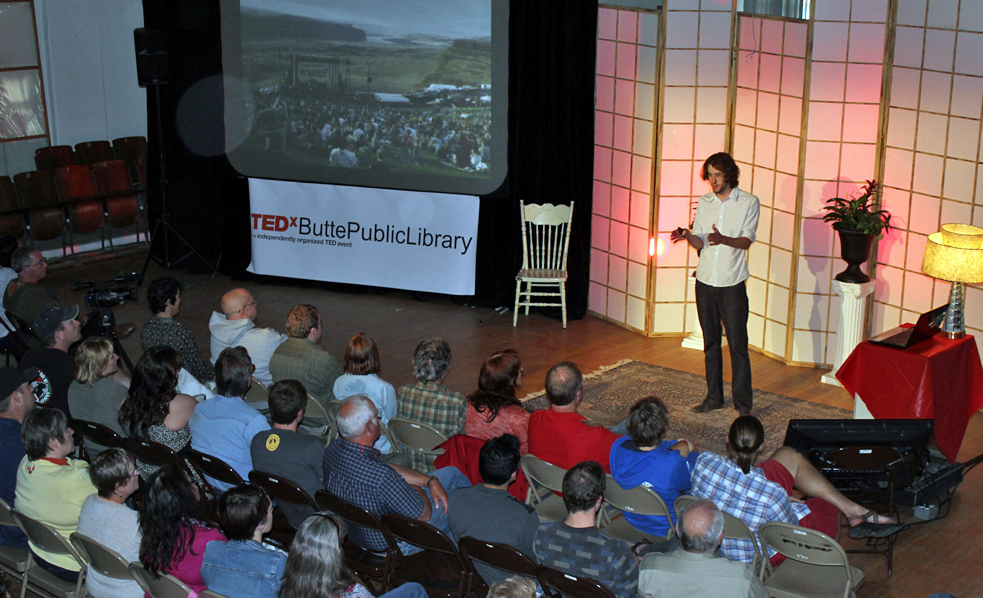 Lee Miller, director of the Butte-Silver Bow Public Library in Butte, Montana, has been doing just that: adapting. She’s been overseeing the construction of an art gallery in the library’s common space over the past year. This is where she held the first TEDxButtePublicLibrary in February, around a simulcast of the TED2014 conference. The new space stemmed, in part, from the growth of their TEDx community and the need for a larger venue for future TEDx events, as well as for other educational and arts programming.

TEDxButtePublicLibrary is an opportunity for people to watch talks together, but also a way for curious thinkers to connect with one another. Miller organized her first event with live speakers last summer, bringing together three local leaders — an arts advocate, an activist and a “hooch aficionado” — to share their experiences of working and living in Butte. This year, she invited a Butte history buff, a business professor and a sound artist. She and her team are now considering simulcast and speaker events for 2015.

Miller describes libraries as a “third space”—a social environment that is distinct from home and work. “Libraries have long been that place for civic dialogue and access to information,” she says.

For Barr in Juneau, it’s an exciting time to work in libraries. “Our mission and the work that we’re doing is broadening exponentially, and really fast,” he says. Around the country he says, libraries large and small are starting maker spaces, supporting business incubation, even allowing patrons to check out fishing poles, microscopes and telescopes. “It’s evolving selectively depending on what each community needs most from its library.” For Juneau, which he calls a “politically divided” community, Barr saw a big need for dialogue and discussion.

Barr talks about a new library that’s being built in Mendenhall Valley, one of the most populous areas of Alaska, which is slated to open to the public in September of next year. The structure will be 20,000 square feet — twice the size of its predecessor — and will include one large meeting space along with five smaller ones. One of these rooms, he says, will be the meeting spot for the next TEDxJuneauLibrary. 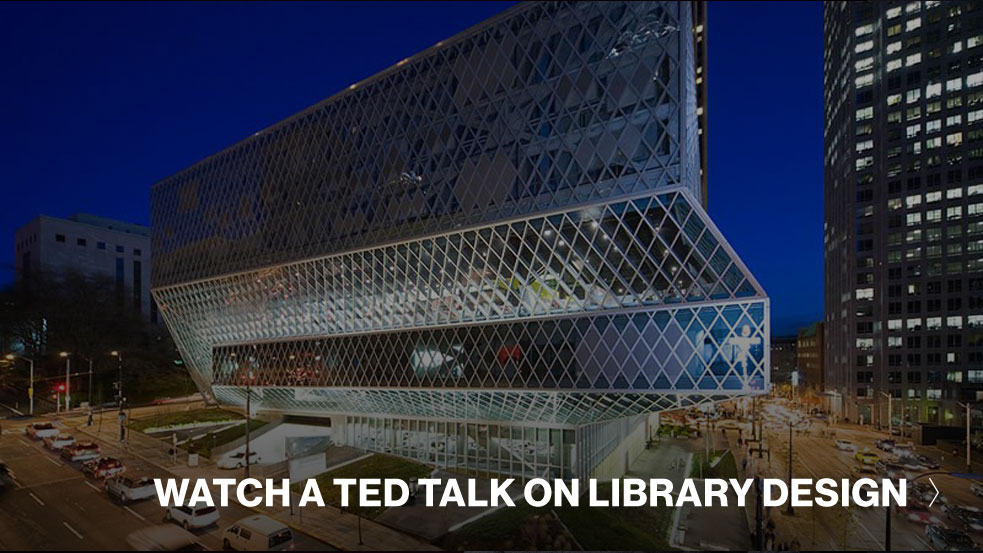