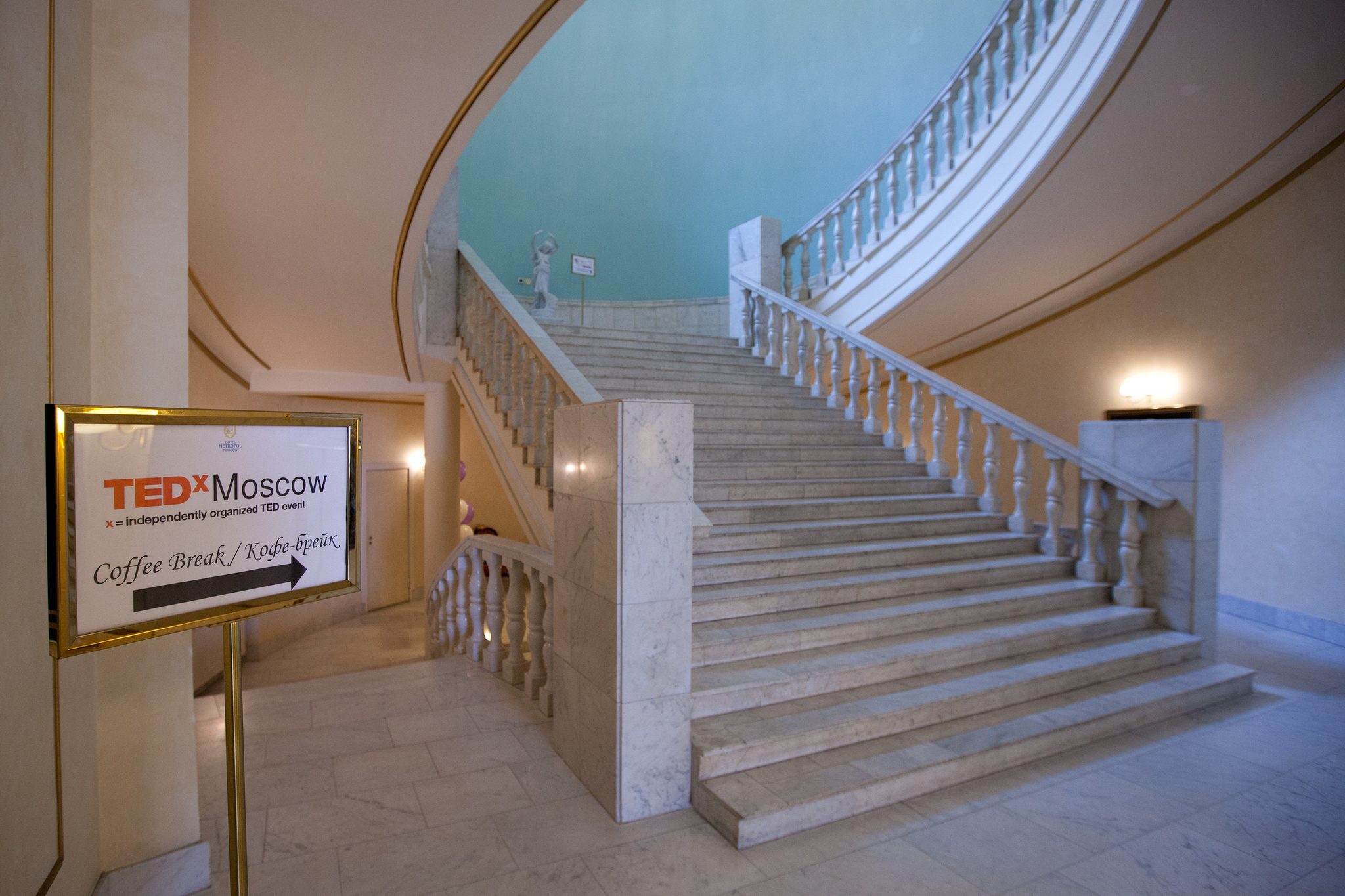 TEDxMoscow took place in the historic Hotel Metropol, a grand hotel built before the Russian Revolution of 1917. Photo: Courtesy of TEDxMoscow

At the century-old Hotel Metropol in central Moscow, the attendees of TEDxMoscow received a surprising call from a speaker 268 miles away. Not 268 miles to the east or west — but 268 miles above the Earth’s surface. From aboard the International Space Station, cosmonaut Elena Serova videoconferenced in to describe the sunrises and sunsets she sees from her window.

TEDxMoscow happened on February 15 — just a week before the assassination of opposition leader Boris Nemtsov rocked the city. In hindsight, it was a moment to take stock. The event, the largest TEDx in Russia to date, centered around the idea of possibility and brought together speakers like a bioengineering expert, a virus modeler and a fraud investigator. Each of them wowed the audience, with Serova’s beamed-in call as a stellar midday surprise.

Connecting these disparate pieces was no easy feat, says TEDxMoscow organizer Andrey Egorov. “Moscow is very, very big. People who live in one part of the city may have never been to another area,” he says, pointing out that the city has 12 million people packed into 970 square miles. He has been working to plant the seed of TEDx in his local community for the past five years.

When Egorov first heard about TED, he was working at Skolkovo Innovation Center, a technology and business hub also known as “Russia’s Silicon Valley.” He began organizing TEDx events at Skolkovo with themes that ranged from “Revolutionary breakthroughs” to “The power of optimism.” He attended TEDGlobal in 2011 and became a TEDx ambassador for Russia, providing advice to TED and fostering the regional TEDx community. Last year, Egorov finally acquired the license to create a city-wide event in Moscow. 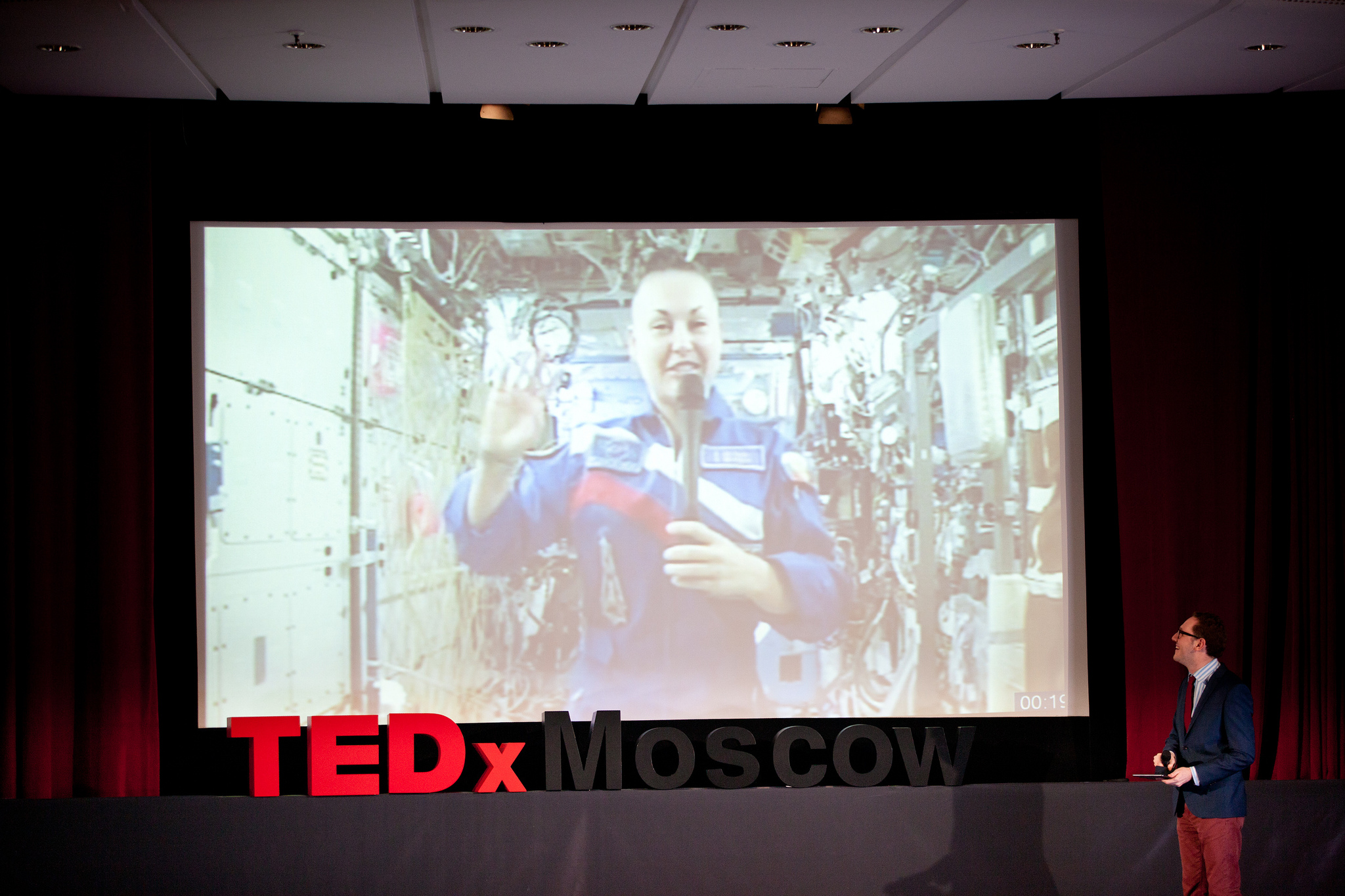 Astronaut Elena Serova beamed in from the International Space Station to speak at TEDxMoscow. Photo: Courtesy of TEDxMoscow

“It’s sometimes difficult in Russia to explain TED. Very often I begin with what TED is, when it was founded, why people around the world can watch videos,” says Egrov. “And then how we apply to organize events in Russia.”

People don’t naturally understand the multidisciplinary approach of TEDx, he says. In Russia, even the talk format itself is a novel concept. Over the years, Egorov has learned how to coach speakers to be more loose and conversational, and to lean away from the typical lecture format. He’s instructed them on the anatomy of a compelling 18-minute talk and found an accessible way to explain to speakers what the platform demands: that TEDx speakers “perform almost like an actor in a theater.”

Although TEDxMoscow was originally slated to happen in December, the team decided to push the event to February and drum up excitement with a salon event instead. They invited speakers to present their favorite TED Talk and to give a short five minute speech about why they chose the talk. “It was a live preview,” says Egorov.

On the day of the event, a light sprinkling of snow dusted the entrance of the Hotel Metropol, as 300 attendees shuffled into the hotel’s cozy theater with red velvet seats. As the lights dimmed, an intro video showed Moscow as a neon-colored pinball machine, a ball navigating around the city’s different landmarks before shooting off into space. A local musical collective opened the first session with song, and the head of a bioinformatics laboratory followed, introducing the audience to the 30 quadrillion bacteria in the room. More talks followed including ones on the power of classical music, the significance of May 9 or Victory Day, and the benefits of football for children. Midway through the second session, Serova popped up on the screen, and waved to the applauding audience.

During the breaks, everyone headed to the reception area in the Art-Nouveau style “Red Hall.” Here, the coffee was free-flowing and a friendly wooden robot cruised around greeting attendees. In the corner, vintage Russian arcade games such as “Basketball” and “Snaiper-2” were on hand as conversation starters. A talented group of illustrators pasted their live drawings of the talks onto the wall. 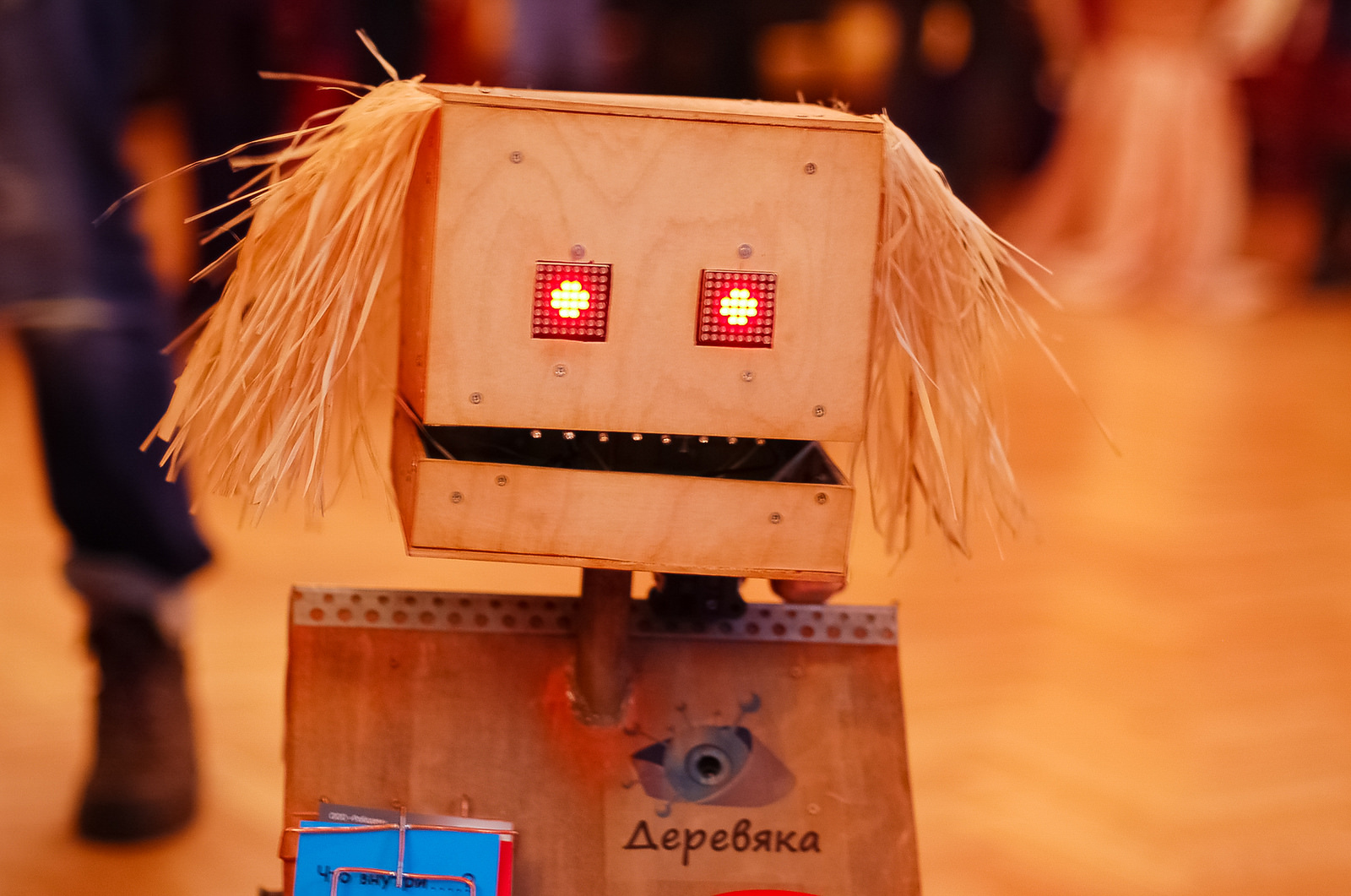 A wooden robot roamed the Red Hall and mingled with guests during the break. Photo: TEDxMoscow

For this first live TEDxMoscow event, Egorov and his team chose the theme “Possible is everything” — an inverted form of the meme,“Impossible Is Nothing.” They wanted to challenge speakers and attendees to think beyond what’s possible and to start mapping the practical steps toward their goals. But the phrase was also a mantra to keep the organizing team going as well. They asked attendees how they could, as a community, transform dreams into tangible change that expanded the boundaries of the sciences, arts and business.

“My main thing, even in my regular job, is to create a vision for a new generation and to try to show people what is happening in the world, not just in Russia,” says Egorov. “I hope after our TEDx event, people will look at the world with a wider point of view.”

At the same time, especially given recent political tensions, he hopes that TEDxMoscow might help people outside see beyond the stereotype of Russia as a country that’s still rough around the edges. “Many people think it’s a dangerous city. It’s like any other city, with its good and its bad,” he says.

Egorov hopes that TEDxMoscow can affect change on the small-scale. While preparing for the event, he recalls trying to persuade local businesses to be sponsors and venues to share their spaces. Because most had never heard of TEDx or TED, they declined. But with the first large-scale event behind them, Egorov and his team can use it as a successful case study to not only get them more aid, but to help other future TEDx events get off the ground.

“I want to show this event, this format, to different companies who can be future supporters. Not just of TEDxMoscow, but of other TEDx’s as well,” he says.

The journey for Egorov and TEDxMoscow is only just beginning. Already, a livestream of the upcoming TED conference is in the works, as is a future TEDxMoscow. “I don’t want to give up after the first event,” says Egorov. 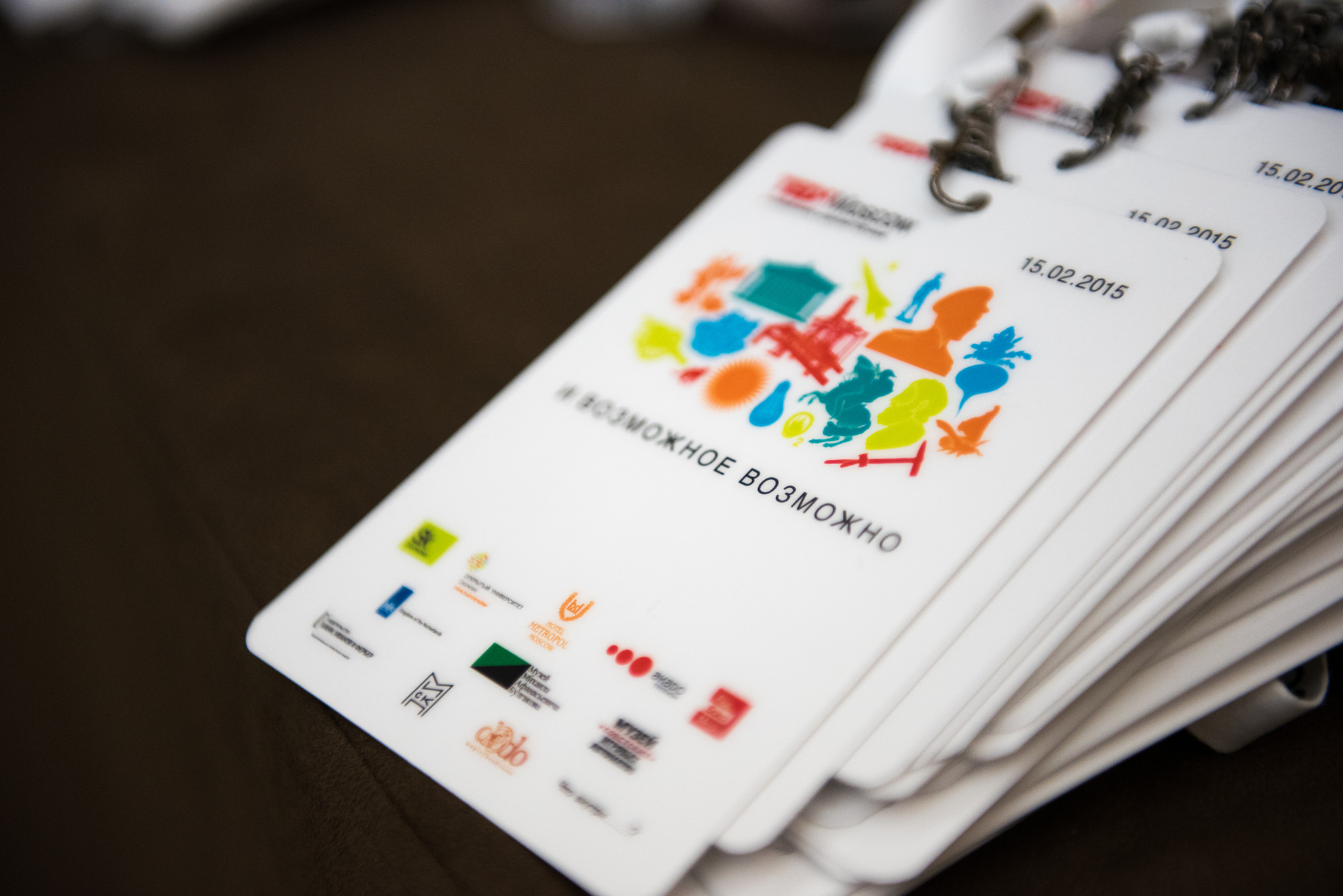