We’re six weeks into TED2020! For session 6: a celebration of beauty on every level, from planet-trekking feats of engineering to art that deeply examines our past, present, future — and much more.

Planetary scientist Elizabeth “Zibi” Turtle shows off the work behind Dragonfly: a rotorcraft being developed to explore Titan, Saturn’s largest moon, by air. She speaks at TED2020: Uncharted on June 25, 2020. (Photo courtesy of TED)

Big idea: The Dragonfly Mission, set to launch in 2026, will study Titan, the largest moon orbiting Saturn. Through this mission, scientists may discover the secrets of the solar system’s origin, the history of life on Earth — and even the potential for life beyond our planet.

How? Launched in 1997, the Cassini-Huygens Mission provided scientists with incredible information about Titan, a water-based moon with remarkable similarities to Earth. We learned that Titan’s geography includes sand dunes, craters and mountains, and that vast oceans of water — perhaps 10 times as large as Earth’s total supply — lie deep underneath Titan’s surface. In many ways, Titan is the closest parallel to pre-life, early Earth, Elizabeth Turtle explains. The Cassini-Huygens Mission ended in 2017, and now hundreds of scientists across the world are working on the Dragonfly Mission, which will dramatically expand our knowledge of Titan. Unlike the Cassini-Huygens spacecraft, Dragonfly will live within Titan’s atmosphere, flying across the moon to gather samples and study its chemical makeup, weather and geography. The data Dragonfly sends back may bring us closer to thrilling discoveries on the makeup of the solar system, the habitability of other planets and the beginnings of life itself. “Dragonfly is a search for greater understanding — not just of Titan and the mysteries of our solar system, but of our own origins,” Turtle says. 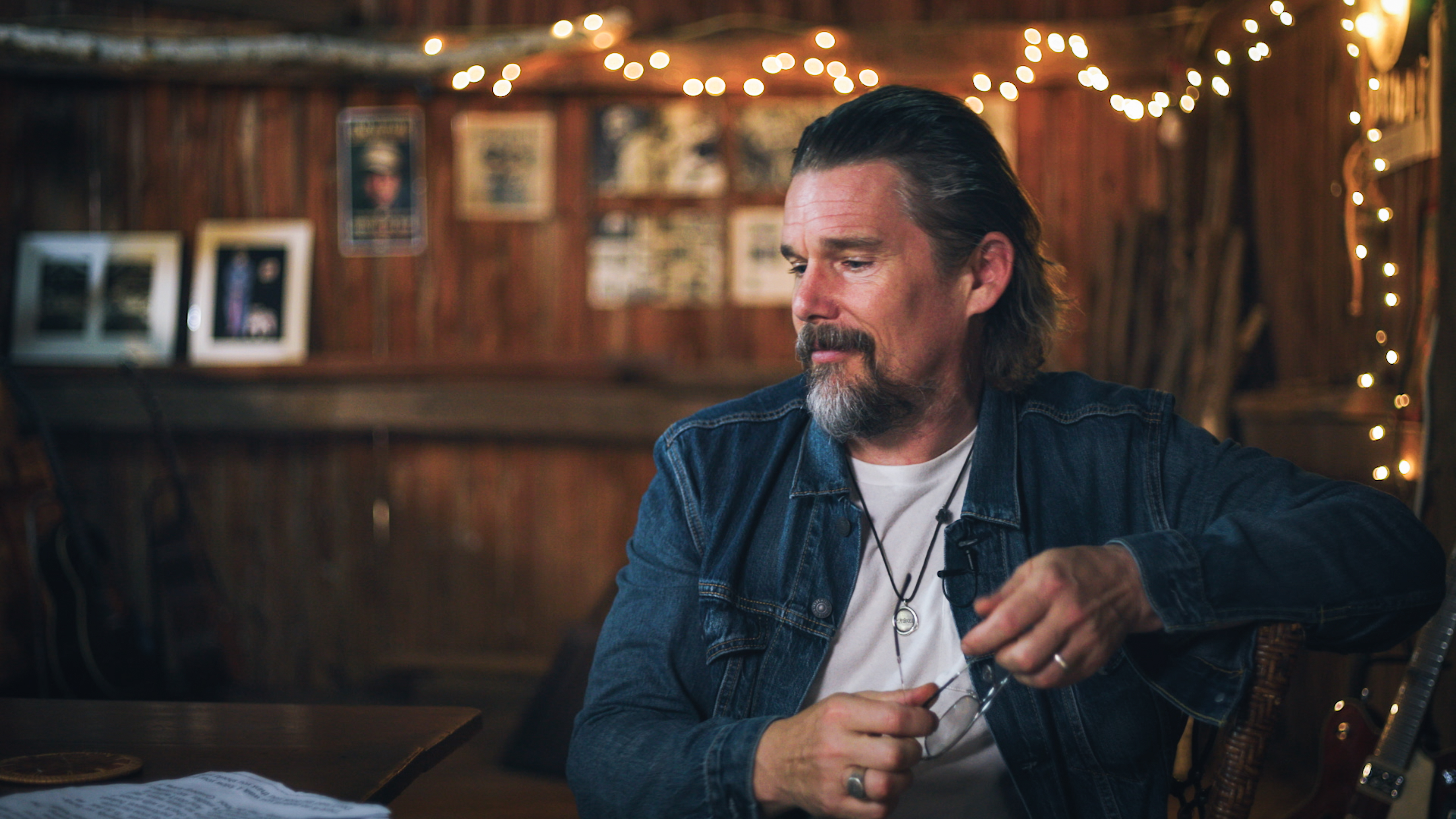 “Do you think human creativity matters?” asks actor, writer and director Ethan Hawke. He gives us his compelling answer at TED2020: Uncharted on June 25, 2020. (Photo courtesy of TED)

How? We often struggle to give ourselves permission to be creative because we’re all a little suspect of our own talent, says Ethan Hawke. Recounting his own journey of creative discovery over a 30-year career in acting — along with the beauty he sees in everyday moments with his family — Hawke encourages us to reframe this counterproductive definition of human creativity. Creative expression has nothing to do with talent, he says, but rather is a process of learning who you are and how you connect to other people. Instead of giving in to the pull of old habits and avoiding new experiences — maybe you’re hesitant to enroll in that poetry course or cook that complicated 20-step recipe — Hawke urges us to engage in a rich variety of creative outlets and, most importantly, embrace feeling foolish along the way. “I think most of us really want to offer the world something of quality, something that the world will consider good or important — and that’s really the enemy,” Hawke says. “Because it’s not up to us whether what we do is any good. And if history has taught us anything, the world is an extremely unreliable critic. So, you have to ask yourself, do you think human creativity matters?”

Keeping the beauty of the session flowing, singer-songwriter Bob Schneider performs “Joey’s Song,” “The Other Side” and “Lorena.”

“We have thousands of years of ancient knowledge that we just need to listen to and allow it to expand our thinking about designing symbiotically with nature,” says architect Julia Watson. “By listening, we’ll only become wiser and ready for those 21st-century challenges that we know will endanger our people and our planet.” She speaks at TED2020: Uncharted on June 25, 2020. (Photo courtesy of TED)

Big idea: Ancient Indigenous technology can teach us how to design with nature, instead of against it, when facing challenges. We just need to look and listen.

How? In her global search for ancient design systems and solutions, Julia Watson has encountered wondrous innovations to counter climate challenges that we all can learn from. “High-tech solutions are definitely going to help us solve some of these problems, but in our rush towards the future, we tend to forget about the past in other parts of the world,” she says. Watson takes us to the villages of Khasi, India, where people have built living bridges woven from ancient roots that strengthen over time to enable travel when monsoon season hits. She introduces us to a water-based civilization in the Mesopotamian Marshlands, where for 6,000 years, the Maʻdān people have lived on manmade islands built from harvested reeds. And she shows us a floating African city in Benin, where buildings are stilted above flooded land. “I’m an architect, and I’ve been trained to seek solutions in permanence, concrete, steel, glass. These are all used to build a fortress against nature,” Watson says. “But my search for ancient systems and Indigenous technologies has been different. It’s been inspired by an idea that we can seed creativity in crisis.”

“It takes creativity to be able to imagine a future that is so different from the one before you,” says artist Titus Kaphar. He speaks at TED2020: Uncharted on June 25, 2020. (Photo courtesy of TED)

Big idea: Beauty can open our hearts to difficult conversations.

How? A painting’s color, form or composition pulls you in, functioning as a kind of Trojan horse out of which difficult conversations can emerge, says artist Titus Kaphar. (See for yourself in his unforgettable live workshop from TED2017.) Two weeks after George Floyd’s death and the Movement for Black Lives protests that followed, Kaphar reflects on his evolution as an artist and takes us on a tour of his work — from The Jerome Project, which examines the US criminal justice system through the lens of 18th- and 19th-century American portraiture, to his newest series, From a Tropical Space, a haunting body of work about Black mothers whose children have disappeared. In addition to painting, Kaphar shares the work and idea behind NXTHVN, an arts incubator and creative community for young people in his hometown of Dixwell, Connecticut. “It takes creativity to be able to imagine a future that is so different from the one before you,” he says.