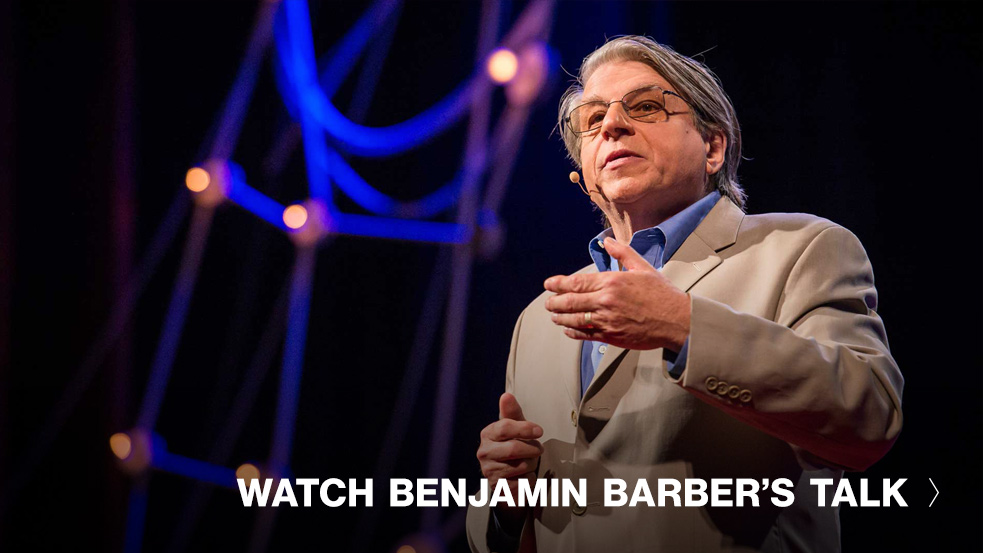 In the face of global crises like climate change and refugee migration, it seems sometimes that nation-states are hopelessly gridlocked and unable to act. At TEDGlobal 2013, political theorist Benjamin Barber laid out a counter-proposal: Go local. Big cities are demonstrating a remarkable capacity to govern themselves democratically and efficiently in networks, both locally and globally. They share certain unique qualities that can elude bigger entities: pragmatism, civic trust, participation, creativity and cooperation. Mayors implement practical change every day. So, Barber suggests, we should give mayors more power — including with big global issues.

In Barber’s 2014 book If Mayors Ruled the World. Dysfunctional Nations, Rising Cities he proposes the Global Parliament of Mayors, a global governance platform that brings together collective urban political power. Now, it’s become a reality. From September 10–12, some 100 mayors of major cities and representatives of urban networks will meet in The Hague.

In this Q&A, Barber shares details on the need for a Global Parliament of Mayors, the upcoming gathering, and what it took to turn this dream into a reality.

Professor Barber, give us the cheat sheet on the Global Parliament of Mayors: Why is it needed?

Traditional nation-states and international organizations have become less able to discharge their sovereign responsibility to secure the lives, liberties and property of their citizens, especially in the face of existential threats like climate change. It’s a sort of sovereign default, and it has left cities to carry the responsibility for sustainability and other global goods. For that, they need a global urban governance network that is both democratic and efficient — something that goes further than the urban networks we already have. Namely, a Global Parliament of Mayors that can offer cities a megaphone for their collective urban voice and a platform for common urban policy-making.

You are basically making a counterintuitive claim that, in a globalizing world, democracy’s best hope is not found in a global government, but locally in cities.

It is only counterintuitive if you assume local and global are antonyms. But in the new world of interdependence, local problems are global problems, and municipal goods are global goods. Think about refugees, pandemic disease, inequality, crime, markets, terrorism and of course, climate change; These are all global challenges that manifest themselves locally in cities. Problems and solutions today are “glocal”: at once both local and global. Indeed, the irony is that states tend to be bordered, insulated and parochial, while cities have become open, transactional, urbane and cosmopolitan — the carrier of universal values. That is why urban networks have been more successful in addressing global challenges than nation-states.

Who will participate in the Hague gathering?

Because it is the inaugural convening of a new democratic governance body with a global compass, we are gathering representatives of more than 100 cities from around the world, North and South, developed and developing, wealthy and poor, large and small — as few as 200,000 residents. We also seek representation by mayors, rather than their deputies, so that the crucial decisions have the full legitimacy of mayoral participation.

What was the journey from the idea of the GPM to actually convening it?

I proposed the governance body in the final chapter of my book If Mayors Ruled the World. Almost immediately following its publication and my TED Talk in 2013, I began to hear from sitting mayors, including those in Seoul, Los Angeles, London, Hamburg, Boston and elsewhere, inquiring about the idea with interest and enthusiasm. This interest resulted in planning meetings in Seoul with Mayor Park Won-soon, in New York City with the publication CityLab and in Amsterdam with several mayors in The Netherlands, including Mayor Eberhard van der Laan, Mayor Ahmed Aboutaleb and Mayor Jozias van Aartsen. In the summer of 2015, Mayor van Aartsen proposed that The Hague be the site for the inaugural convening in September 2016. The process, led by visionary mayors, was laborious but unwavering, animated by our small GPM team in New York and facilitated by our advisory committee and the City of The Hague.

How is the event structured? What kind of discussions will take place?

Over a three-day weekend, we will hold four parliamentary sessions, starting with three plenaries, on climate change (“The City and Nature”), refugees (“Arrival Cities”) and governance (“The City and Democracy”). Each plenary will aim to put a few key practical proposals for common action on the table. Proposals will call for opt-in by individual cities, rather than top-down imperatives, and will be prepared in advance by our Advisory Committee, with mayors debating and amending them with the assistance of experts from relevant urban networks, such as the C40 Climate Cities and EFUS (the European Forum for Urban Security). A final plenary session will offer the opportunity for formal ratification of agreed-upon proposals.

What do you hope happens during this inaugural gathering?

The two principal aims of the GPM are to establish the legitimacy and continuity of the new global organization of mayors as a governance body — including future meetings and a digital platform where mayors can meet online — and to demonstrate the capacity of cities to establish common policies in critical domains, such as climate change and refugees, that can serve their citizens when nation-states are gridlocked and unable to act. Cities have both a responsibility and a right to act on behalf of their citizens in critical areas of sustainability and liberty when states do not or cannot act. Some mayors are willing to act autonomously while others prefer a model of full cooperation with states. Yet in the end, citizens have a right to life and liberty and sustainability too, which means that cities have a right to govern on their behalf when that is the only road to sustainability. The argument is laid out in our document “Declaration of the Rights of Cities and Citizens.”

You have a new book coming out early next year. Can you give us a preview?

It will be titled Cool Cities: Urban Sustainability in a Warming World, from Yale Press. It is a kind of sequel to the previous book and looks at the role cities have played in combating climate change through existing urban networks like the C40 Climate and ICLEI and in the new Global Parliament of Mayors. It makes the case for mayors governing collaboratively to curb greenhouse gases and promote decarbonization. And it shows that they can go well beyond the COP21 agreement reached in Paris last December in getting real results.