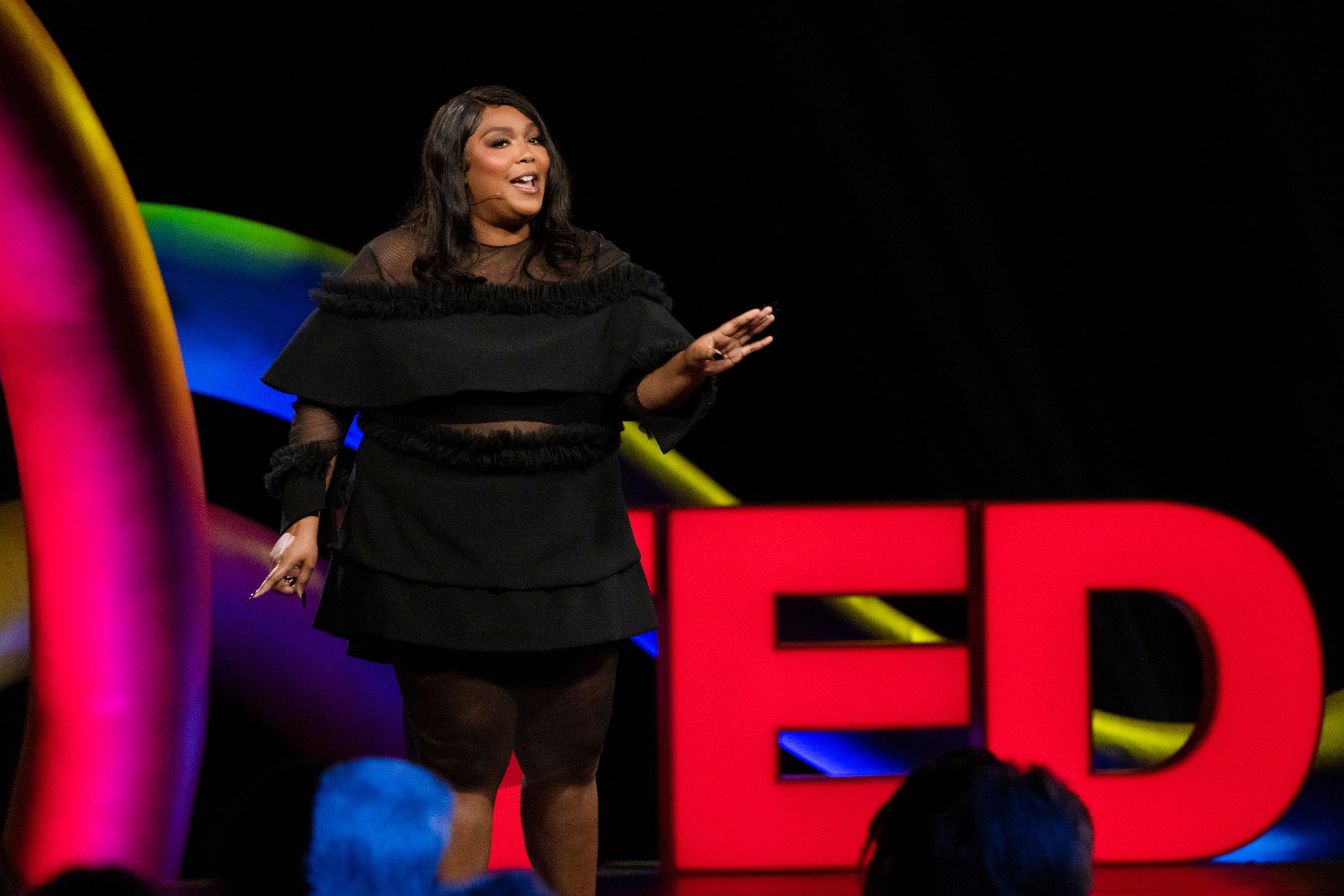 “I twerk to own my power, to reclaim my Blackness, my culture,” says Lizzo in a powerful, delightful talk at TEDMonterey: The Case for Optimism on August 3, 2021. (Photo: Bret Hartman / TED)

We’re all looking for ways to become better, smarter and wiser versions of ourselves. In a spectacularly eclectic Session 7, six speakers share their hard-won wisdom on educating, listening — and even twerking — their way towards a more inclusive world, where everyone has the opportunity to thrive.

Big idea: It’s possible to bring down the barriers higher education upholds and create an environment where anyone can earn a degree with intention and accessibility in mind.

How? The majority of higher education functions like a fortress with high walls — like costs, proximity and excess of time — that students are expected to surmount in order to graduate. This often makes the opportunity accessible to the privileged few. Haugabrook has devoted his entire career to breaking down those obstacles and has identified three approaches to reimagine and redesign the process: in time, place and teaching. He suggests institutions offer academic credit for skills and life experience, attained in work or otherwise, assessed by a university evaluator; that we tap into the potential of local communities as a thriving part of the learning ecosystem; and that universities not mess with the magic of teaching, but make it more accessible by embracing and scaling for online learning. By redefining success and dedication in higher learning, Haugabrook calls for universities, companies and governments to invest deeply in a superhighway of education that allows for fluidity and transferability beyond borders and boundaries — where all roads lead to a degree. 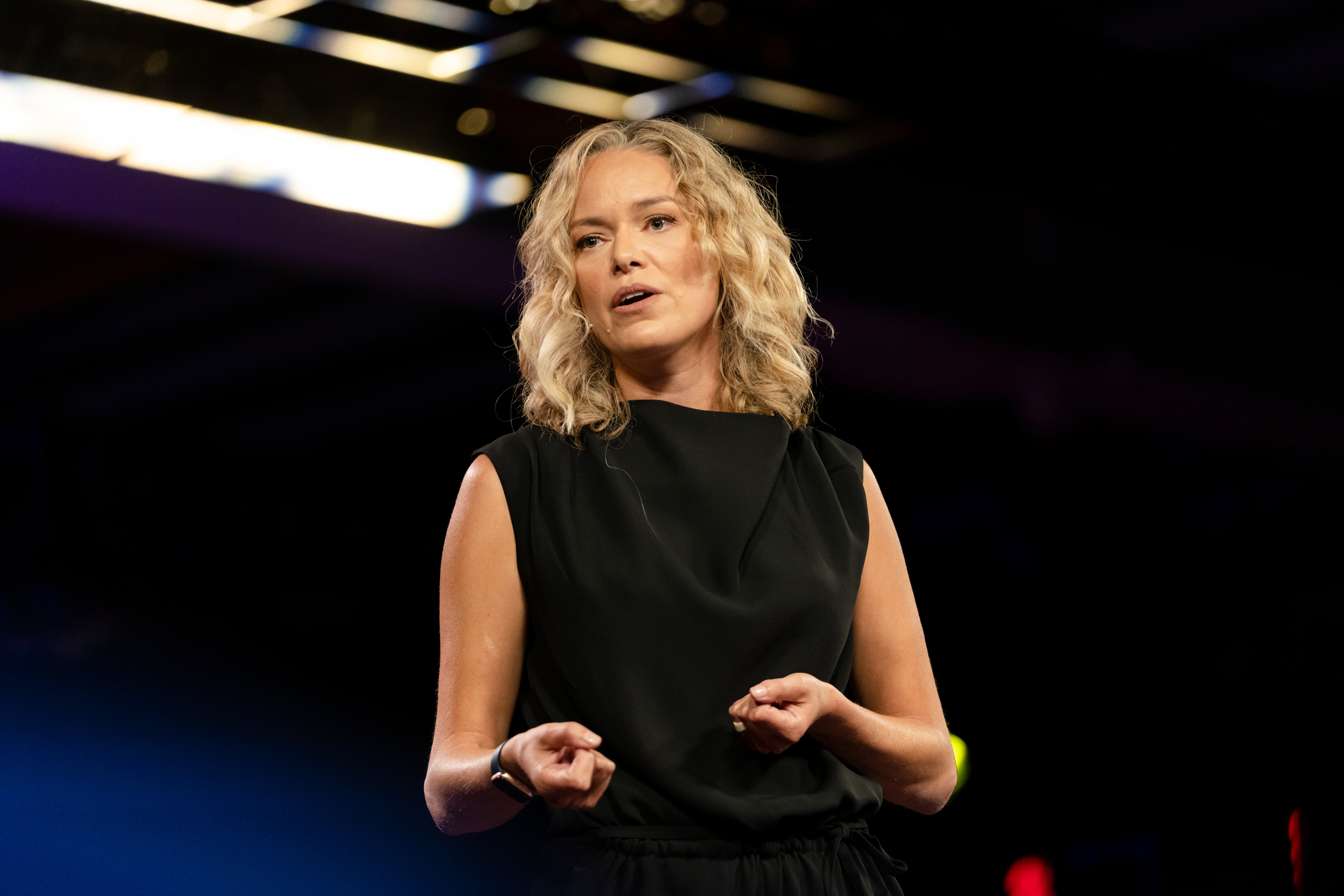 “The seeds of our agreement can become the roots of our common purpose,” says Katherine Maher at TEDMonterey: The Case for Optimism on August 3, 2021. (Ryan Lash / TED)

Big Idea: How can we have productive conversation around disagreement and decision-making without making one shared truth our baseline? Use the Wikipedia model.

How? Wikipedia was (and still is) a radical experiment in self-governance, volunteerism and engrained transparency — and that is what uniquely prepares it for the changing world, says Maher. As the internet’s de-facto encyclopedia, it harbors information on everything from light, niche topics (animals with fraudulent degrees) to weightier, more divisive matters (like religion and politics). The secret is that those who write the articles aren’t focused on the truth or even seeing eye-to-eye, but on collective understanding rather than value, identity and what we believe versus what can be known. What gets messy in everyday conversations is that people often merge facts about the world with their own beliefs. Our reverence for the truth — not to be misconstrued, Maher clarifies that truth does exist and is important — might be a distraction that’s getting in the way of finding common ground and taking action on issues like climate change. So, how do we unite minds and disparate views? Instead of seeking one key truth, we must shift to a minimum viable truth. This means getting it right enough, enough of the time to be useful enough to enough people — while setting aside our own belief systems and dropping perfectionism. Only through collaboration, productive friction, consulting widely and inclusively and weighing difficult decisions with candor (and a large helping of humility) can we create systems that endure and build trust to weather uncertainty. 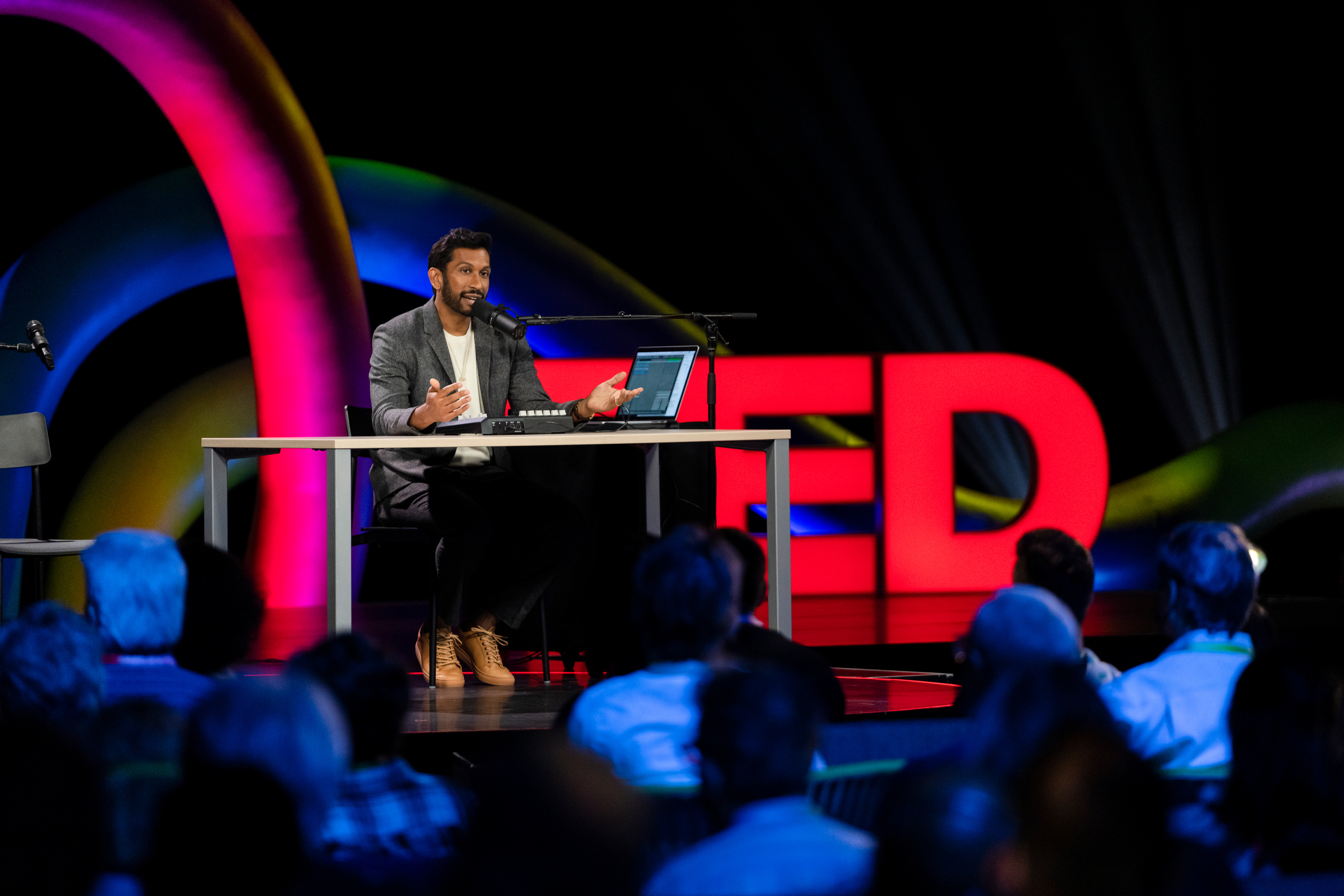 “Every conversation you have with someone has the potential to open up and reveal layers and layers inside, all those rooms within rooms,” says Hrishikesh Hirway at TEDMonterey: The Case for Optimism on August 3, 2021. (Photo: Ryan Lash / TED)

Big idea: If you want to go deeper in your conversations, listen to others like you’d listen to a song.

How? ​​Hrishikesh Hirway is interested in what you miss when you listen to a song for the first time. You might notice the bass part or the lyrics or the cello solo, but what you don’t hear, he says, are all the things the musician lived through to get that music to exist. He compares the experience to staring at a house from the outside. Hirway hosts the podcast (and Netflix series) Song Exploder. On his show, he gets musicians like Fleetwood Mac, The Roots, Billie Eilish, Lin-Manuel Miranda, and Yo-Yo Ma to talk about their work and guide listeners through the hidden layers and depths in their songs. While having these conversations, Hirway realized that if he listened to people like he listened to songs, he could get “inside the house.” He could explore hidden rooms of thought and experience the richness of another person’s ideas. If you want to try his technique, here’s what he suggests: Be open to learning something new; Quit multitasking; and use non-verbal communication to let the other person know you’re engaged without shifting the focus away from them and onto yourself.

Big idea: Life expectancy at birth has doubled in the last century, from a global average of 35 years old in 1921 to 70 years today, thanks to scientific advances and policies set in place to protect human health — but these benefits need to be distributed equally.

How? Throughout most of human history, life was short and Steven Johnson explores the policies and advances that have changed that. One of the simplest but most effective advancements being the pasteurization of milk which helped slash childhood mortality (due to contamination) rates in the mid 19th century. But science cannot drive change by itself. It took 50 years for pasteurization to become the standard in the American food supply. Johnson explains that when looking at our track record of life-lengthening advancements, it usually takes them a while to become mainstream. He reminds us that, somewhat counter-intuitively, change is often driven by large bureaucratic regulatory institutions like the FDA requiring proof of safety and efficacy in our new technology. As scientists push the boundaries of longevity, at a rate where the hype sometimes outstrips reality, Johnson wonders how we can ensure the benefits of technology are equally distributed. He calls for regulations of the future to close the gaps that keep the entirety of humanity from enjoying the revolutionary advances in human health. 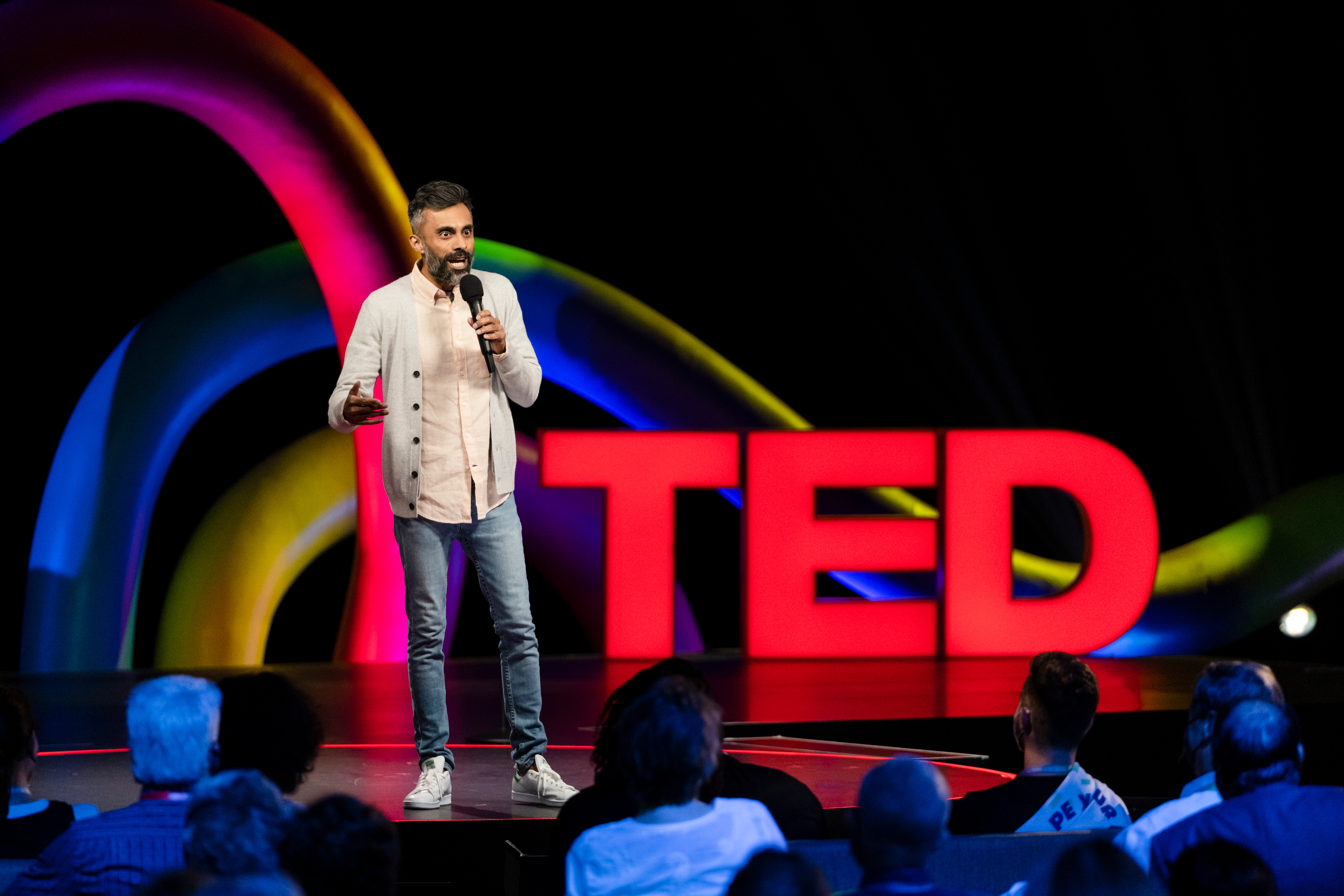 Pardis Parker dispels the myth of “grinding” to be successful in his comedic set at TEDMontereyv on August 3, 2021. (Photo: Ryan Lash / TED)

Comedian Pardis Parker delivers an uproarious standup set centered on a problem he has with a central tenet of modern culture: the “grind”. While our mythologies focus on the shining chimera of endless wealth, little love goes to those for whom life is nasty, brutish and short, who never get to taste the rewards of leisure. In this sardonic but funny talk, Pardis dissects the ugly truths lying beneath the facade of conspicuous consumption (and the assumptions that lie beneath them) — and exposes the absurdity of some of our foundational beliefs.

How? “Twerking is good for humanity,” says superstar Lizzo. Tracing its roots to a traditional West African dance called mapouka, she introduces the TED audience to twerking’s long and lesser known history. Women would circle their hips and pop their behinds in a dance of religious worship, joyful celebration — or even to show interest in marriage. Through time and across the transatlantic slave trade, Black women passed twerking down to the next generation, where the moves permeated Black culture from blues and jazz to modern rap and hip-hop. Twerking found its way to the likes of famed blues singers Ma Rainey and Bessie Smith and became a cultural moment when Beyoncé debuted “The Uh Oh” dance for her 2003 single “Crazy in Love.” Nowadays, twerking is everywhere, and it’s at risk of being co-opted, appropriated and misunderstood, Lizzo says. So, if you’re going to partake, it’s important you understand its origins, development and contribution to Black culture before you shake that ass.