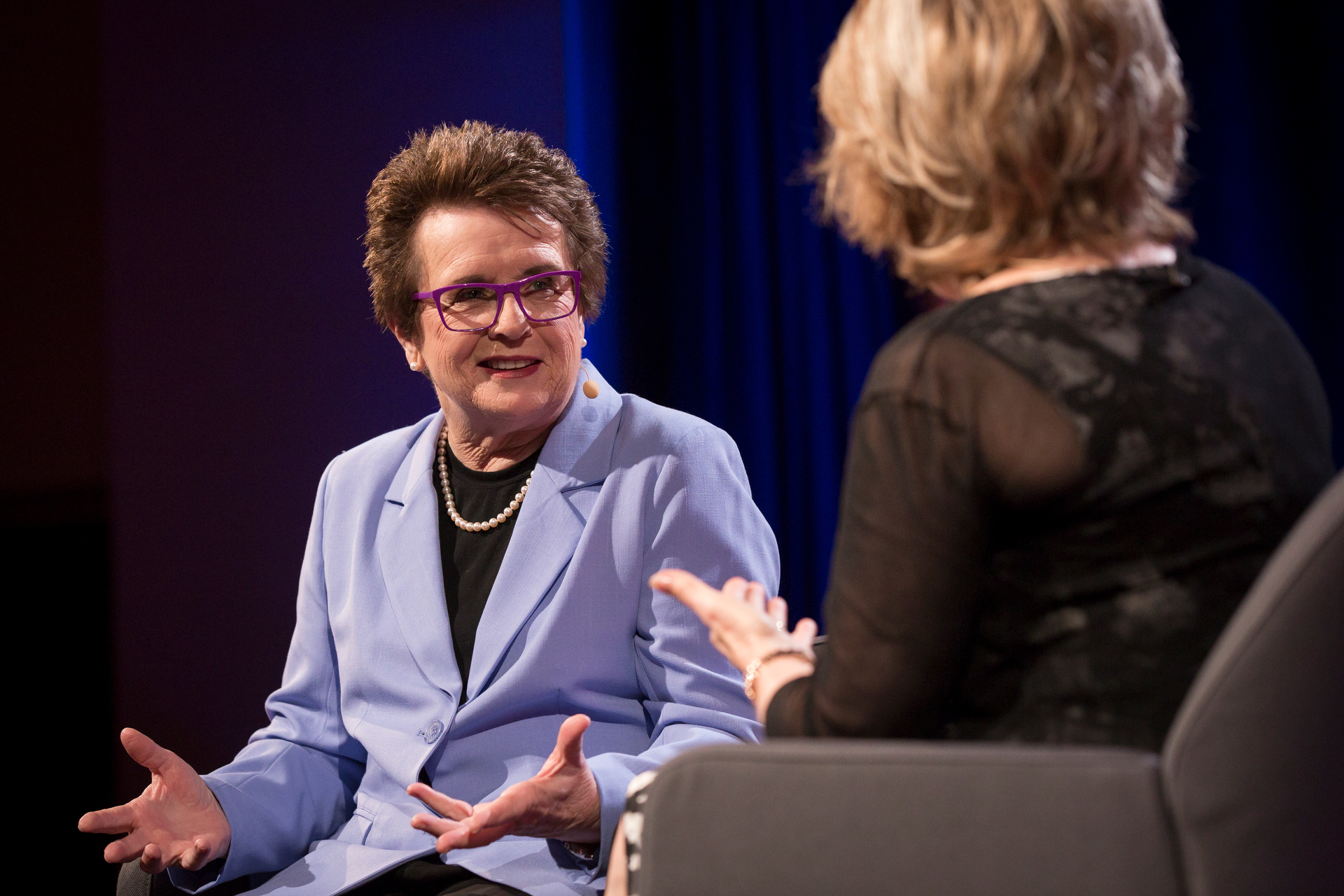 Billie Jean King brings us back to 1973, sharing what was on the line with the legendary Battle of the Sexes tennis grudge match — and what was going through her head. Photo: Marla Aufmuth/TED

“Bobby Riggs was one of my heroes. I admired him,” says Billie Jean King. “That’s one of the reasons I beat him — because I respected him.”

King’s Q&A on the TEDWomen stage begins with a discussion of one of the greatest sports moments of all time: the Battle of the Sexes, a tennis match between King and Riggs, which she won on Sept. 20, 1973.

“You must have felt like the fate of world’s women was on every stroke,” says host Pat Mitchell.

“I knew it was about social change,” says King. “I was really nervous when we announced it. I felt like the whole world was on my shoulders, and if I lose it’s going to put women back 50 years at least.”

The pressure was on a personal level, and a cultural one. “It was only the third year of [female tennis players] having a tour,” says King. “Our dream was for any girl in any place in the world, if she were good enough, to have a place to compete and make a living. We knew it wasn’t about our generation, but it was about the future generation.”

But it was bigger still. “Title IX had just passed two year before,” King continues, a US law that mandated access to any activity that got federal funding — including youth sports. “You can have a law, but it’s about changing the hearts and minds to keep up with it.”

Her expectations of the importance of the match were not off base, she says. “Two things came out of that match: For women, self-confidence and empowerment. They actually had enough nerve to ask for a raise. Some women had waited 10, 15 years to ask.”

But it had an even bigger impact on men, says King. “If you’re in your 50s or 60s, you’re the first generation of men of the women’s movement,” she says. “Men come up to me who have tears in their eyes. They say, ‘Billie, I was very young when I saw that match. Now I have a daughter. I’m so happy I saw that.'”

“One of those men was President Obama,” says King. “He said, ‘You don’t realize this, but I saw that match when I was 12. It changed how I raised my daughters.’”

But, as Mitchell points out, King’s legacy is about more than that one match. Mitchell asks King what drove her instinct for social justice.

“At 11, I wanted to be the number one tennis player in the world,” says King. “Fast forward to 12 years old, when I started thinking about my sport and how tiny it was. I’m a white gal, we wear white and everyone who plays is white. I started thinking, ‘Where is everyone else?’ At that moment, I promised myself I’d fight for equal rights for men and women the rest of my life.”

In Kings ideal world, everyone can “be able to be their authentic self 24/7.” She says, “Even being gay, I catch myself feeling that little surge — of not being comfortable in my own skin.”

The conversation shifts to millennials and the research King has done on that generation for the Billie Jean King Leadership Initiative. Millennials, she says, are not satisfied with representation. “They want connection, engagement,” she says. “They’re problem-solvers and they’ve got information at their fingertips.”

She sees big changes ahead in the fight for greater equality. “I’m really ticked,” she says. “I wish I was young again.”

“I have great faith,” she continues. “If you’ve been in sports like I have,  you see that every generation gets better. … I think we all have an obligation to keep moving the needle forward, constantly.”