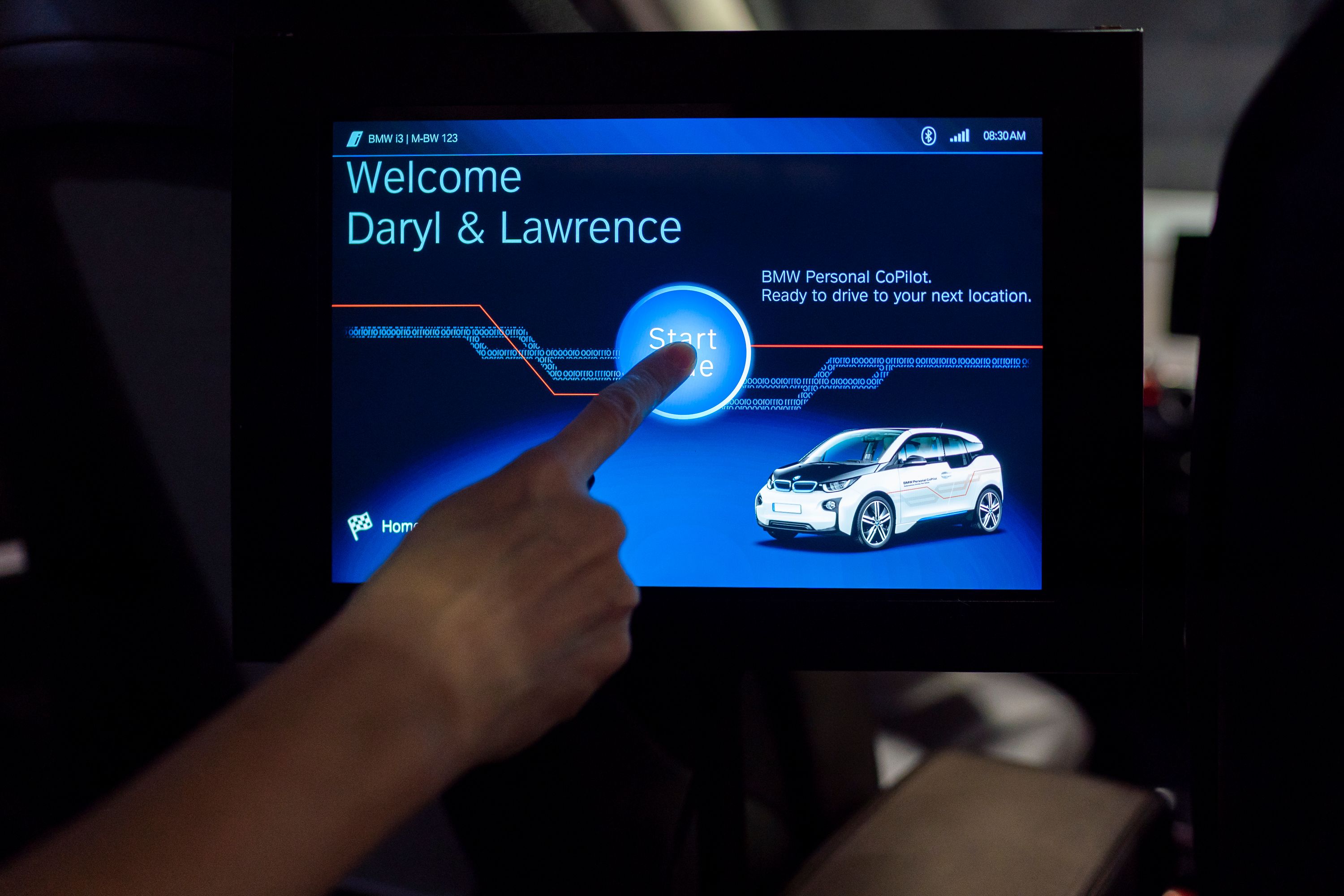 Please be kind — this is only my first attempt at a tagline for the BMW autonomous vehicle which I just went for a test drive, er, test ride in.

Yes, I can proudly say that I’ve gone for a ride in the future — and it’s smooth enough to eat ramen in.

Wait, let me back up (just like a car, get it?). At TED2018, BMW has been treating attendees to rides in its i3 cars that have been kitted out with level 5 autonomous vehicle capability. It’s not exaggerating for me to call this vehicle the future. “You will not be able to buy this in the next three years, but today BMW is working on this technology,” says BMW’s US Technology Office Vice President Simon Euringer. “Normally, we don’t do that but because of all the noise about the autonomous vehicles, we think it makes sense to give people a preview.” Even though BMW has been relatively quiet about its self-driving plans compared to some of its rivals, there’s plenty of action happening behind the scenes. In fact, the company just opened an Autonomous Driving Campus near Munich that brings together 80 teams that are working on this effort. The number of people at BMW focused on self-driving cars is estimated by Euringer to be “way north of 1,000.” He adds, “This is one of the biggest investments in car industry; this is probably a bigger investment than electro-mobility.

Level 5 means there is no driver in the vehicle, no person behind the wheel. In fact, speculates Euringer, “the car would probably not have even a steering wheel.” BMW, like the other auto companies, foresees driverless cars being used by children and other people who don’t have driver’s licenses.

Before my ride, I decided to put the car to a series of tests; I wanted to see if I was able to accomplish three common activities that are challenging in a moving car. My first activity: reading a book. I am an avid reader, but I’m unable to do so in a traditional car because I get carsick. Novel in hand, I got into the backseat of the BMW in the basement of the Vancouver Convention Center. Then, I started the car. “Driving” this autonomous vehicle was like watching a video or using a microwave — I used a touchscreen to enter a destination, hit the “start here” button, and the car began moving. That’s it. Whenever I wanted to stop, I hit the “pause” button and it slowed to a halt. The vehicle glided right through my reading test — the ride was smooth enough that it felt like I was enjoying my book in a comfy leather armchair. I dove into my novel and didn’t emerge until it came time for my next challenge. 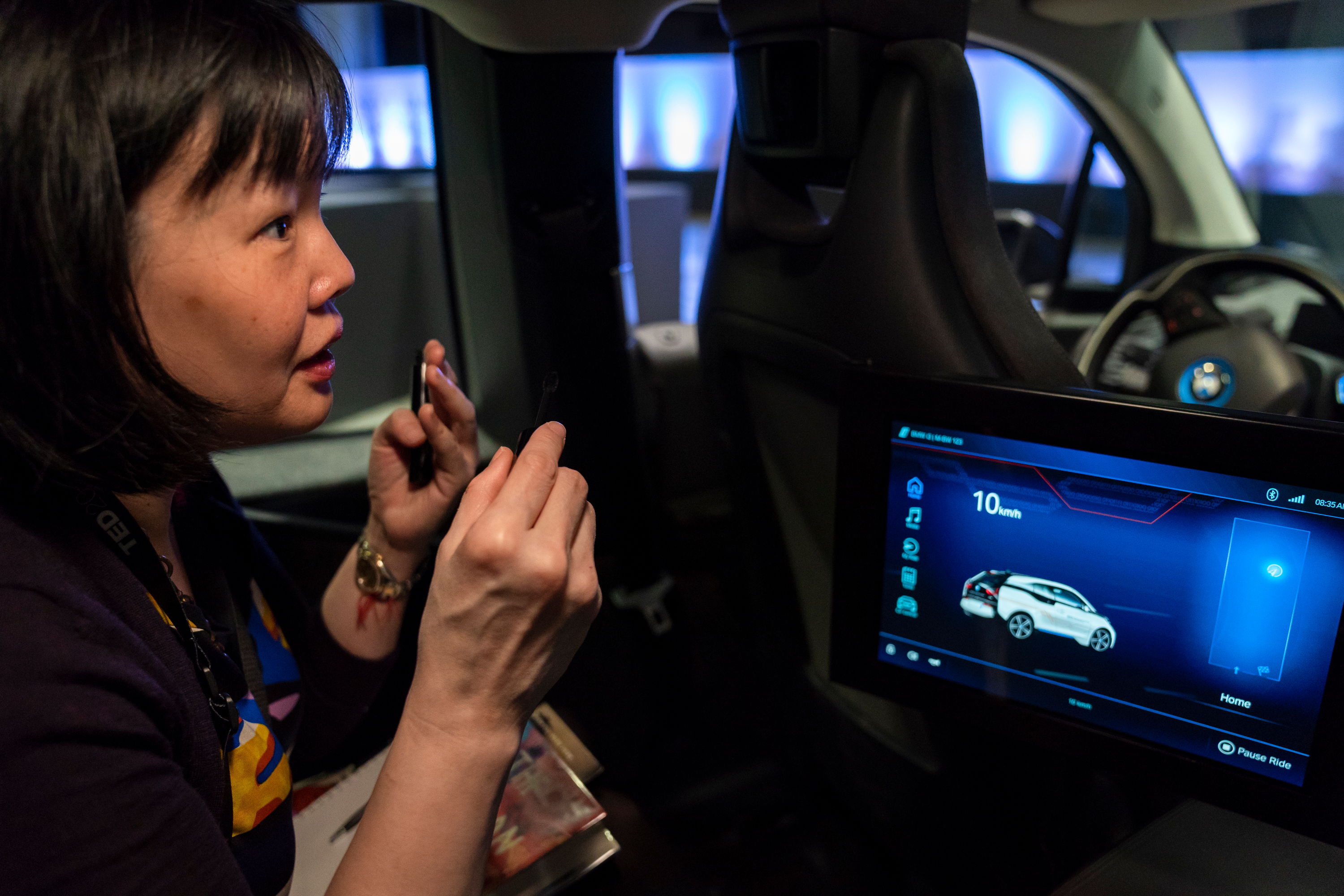 My second activity was applying mascara. As anyone who has ever put on makeup in a traveling car can tell you, the results are often not so pretty, and mascara is among the most difficult cosmetics to handle. Unfortunately, I must report that self-driving capabilities did not make my task that much easier. While the ride was mercifully bump-free, the turns were still enough to make my wand hand shake and smudge; the process was also complicated by the lack of mirror in the backseat for me to use (note to BMW execs: can you fix this?).

Finally, I was ready for my third and final activity: eating noodles. Noodles are an important part of my diet — and in a conventional car, consuming them means spilling, splattering, and needing a change of clothing. Riding in the car, I took out my piping-hot cup of instant ramen and a pair of chopsticks. And I’m glad to say — for me, my dress, the vehicle, but most especially, for the worried BMW representative — that I did not drip a drop. I ate happily and neatly.

With a final tap of the touchscreen, I ended my ride.

Okay, I think I’ve figured out the perfect tagline for this autonomous vehicle: the ultimate noodle machine. What do you think, BMW?