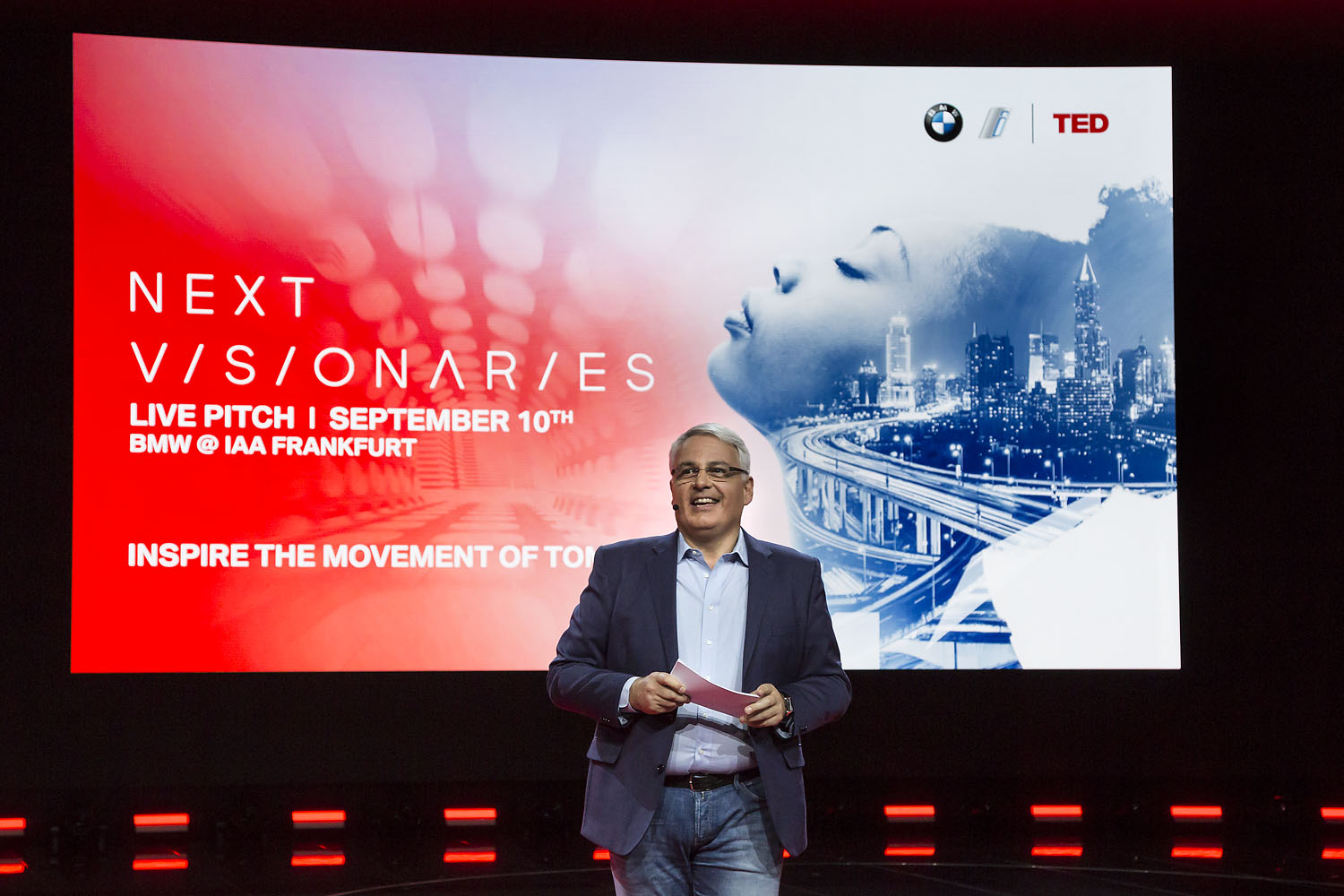 TED’s European curator, Bruno Giussani, kicks off the Next Visionaries live pitch event at the Frankfurt Auto Show on September 10.

Five months ago, BMW i and TED laid down a challenge.

What would the future of mobility look like? There were no constraints on time frame or existing technology. The Next Visionaries project was conceived as a free form exercise in innovation and ideation with the goal to surface some truly breakthrough concepts.

Ideas poured in from around the world. Nearly 200 visionaries from 42 countries offered their own perspectives for how we’d be moving in the near and distant futures. Everything from the unexpected impacts of autonomous cars to imaginative visions for the configuration of future cities and new energy sources.

The 200 visions were pared down to six outstanding ideas which were curated around three central themes exploring the topic of mobility from the perspectives of technology, the environment, and the impact on society overall.

Three TED speakers served as mentors, offering assistance for the six finalists by providing insights on how to develop and communicate their idea pitches which were to be presented at a September 10 event at the Frankfurt, Germany International Motor Show, known as the IAA.

The environmentalist visionaries interacted with electric car activist Monica Araya who is leading efforts to convert her country of Costa Rica into the world’s first entirely fossil-fuel free nation. Futurist Maurice Conti recently took the helm of a new moonshot outfit in Barcelona, looking for ideas that will impact 100 million people or more, be a force for good, and grow into billion-euro businesses. His insights helped shape the visions that explored societal impacts. And for those deep into technology, Fawn Qiu drew on her experiences at the MIT Media Lab, developing and launching apps, and her work on ensuring that the tech space is a diverse one.

After four weeks of refinement, revision, and rehearsal, the visionaries were ready for their moment. Hosted by TED’s International Curator Bruno Giussani, the idea pitch session included context setting talks from each of the mentors followed by brief three minute pitches from each visionary.

In technology, Aarjav Trivedi offered a vision in which autonomous and shared cars ignite some unexpected disruptions in sectors as diverse as health care and real estate. Sebastian Gabor wondered what might happen when shared cars become sentient companions, capable of having a relationship with passengers, and perhaps even sharing some of the car’s favorite sites along the way based on its understanding of the passenger.

In the environmental space, Tom Moloughney drew on his 8 years and 250,000 miles fueled entirely by solar and electricity to lay down a vision that puts electric cars into the reality of today. He even posited an idea for drawing power from the roads, recharging in motion, to show that electric cars don’t need to drain the electric grid but could actually supplement it. Ira Munn shared his vision for a rapid-prototyping concept tapping into the potential of 3D printing for a viable vehicle made up almost entirely of recycled plastic currently polluting the ocean, near his home in New Zealand.

And finally, the societal thinkers shared visions that were both inspiring and potentially alarming. Jeremiah Owyang fleshed out a dystopic scenario in the not too distant future when autonomous cars could evolve from one smart vehicle into an even more sophisticated thinking fleet of cars, a mobility organism with the intelligence to maintain, evolve, and fund itself. Sandra Phillips, who had played a part in several of the world’s most successful shared car services, offered an inspiring vision for how autonomous and shared car networks could transform smaller cities rarely served well by public transport, unlocking social and economic mobility as well.

Consulting with TED curators in New York and onsite in Frankfurt, as well as getting the vital mobility perspective of BMW executives Nicolas Peter and Hildegarde Wortmann, the most compelling idea was that of Sandra Phillips. Sandra will be expanding her idea pitch into a full-length TED Talk at a salon in the TED Theatre in New York City on November 16.

Presented exclusively by BMW i, this TED Salon will curate talks around the theme Speed of Change. The session will consider the rapid evolution and transformation taking place in cities worldwide and answer such questions as How can we keep them humane places in which to live and work? What smart technologies can make transportation of people, goods and ideas flow efficiently? And how can architects and designers use materials and style to preserve and distinguish local cultures? 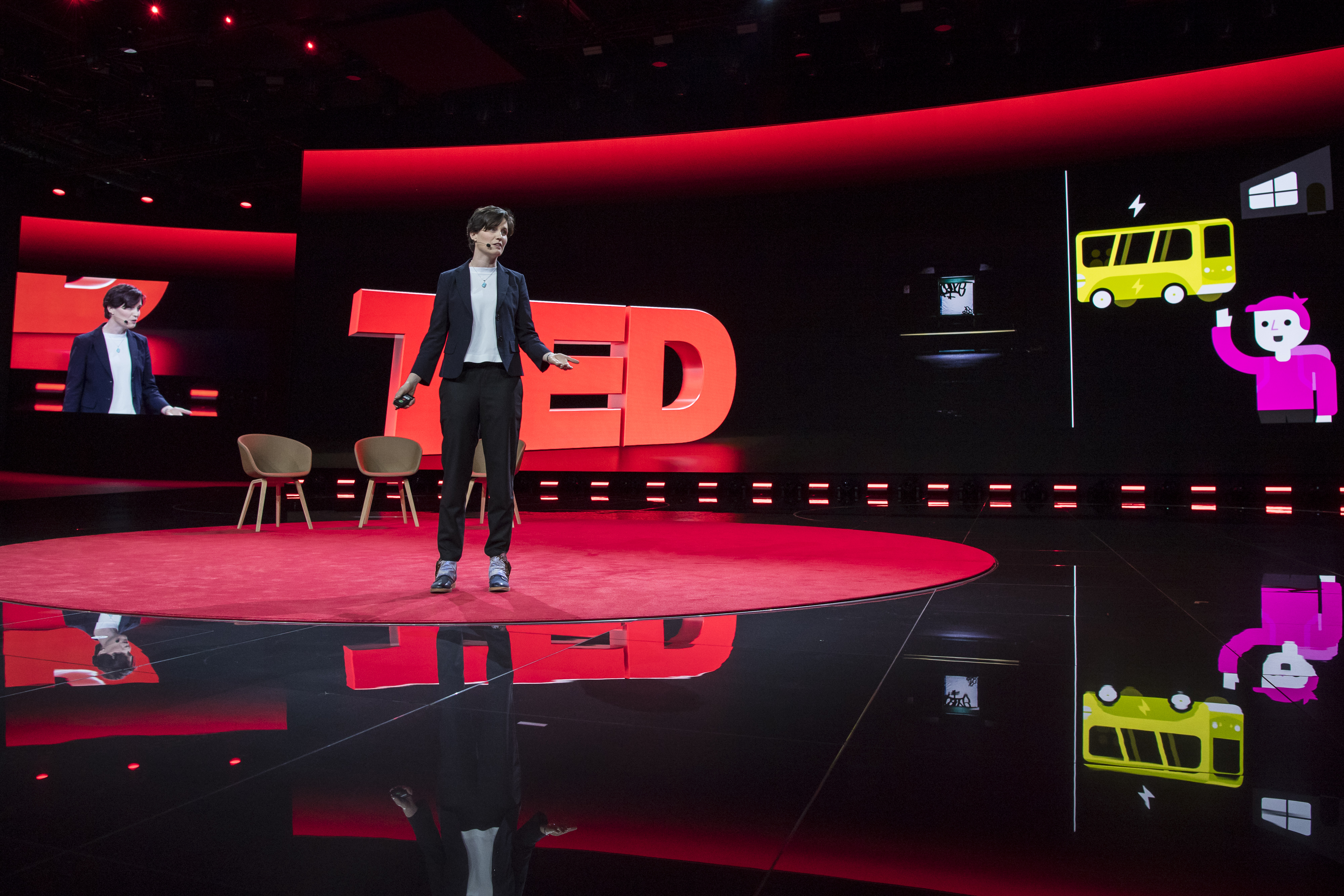 At the Next Visionaries idea pitch, Sandra Phillips offered an inspiring vision for how autonomous and shared car networks could transform smaller cities rarely served well by public transport, unlocking social and economic mobility as well.