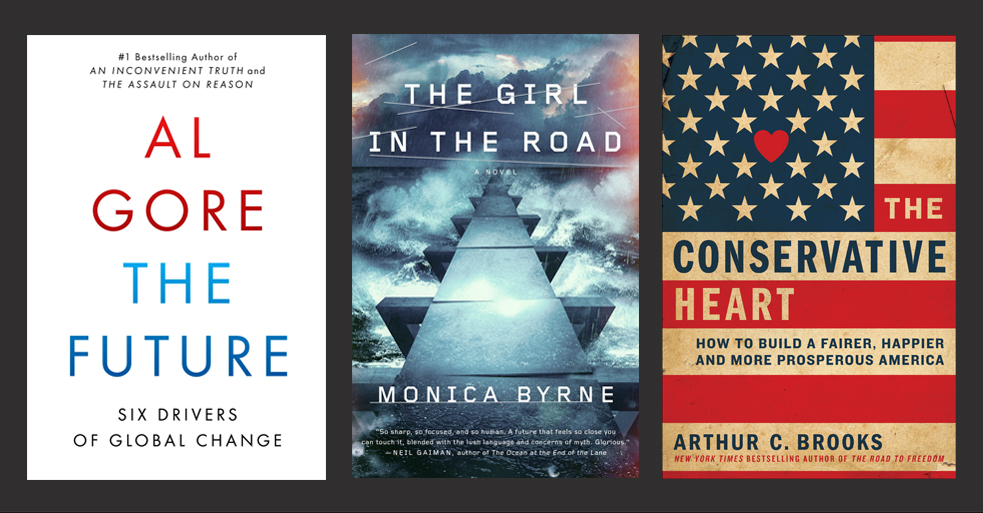 With TED2016 quickly approaching, what better way to get ready than with a good book (or two, or three)? Before the conference starts on February 15, explore these reads by some of our speakers.

Life in the future:

Exegesis by Astro Teller. A science-fiction tale of a self-aware, artificially intelligent machine and its creator grappling with questions of existence and responsibility. Teller, who heads up X (the former Google X), kicks off TED, speaking first in Session 1.

The Girl in the Road: A Novel by Monica Byrne. A fantastical novel set in a future world, chronicling the fates of two women fleeing for freedom. Byrne, a science-fiction writer and trained scientist, speaks in Session 11.

The Language Hoax by John McWhorter. Does language shape how we think and perceive the world? Linguist McWhorter takes on this thesis and proposes something new: it is language that reflects culture and thought — not the other way around. He speaks in Session 4; watch his previous TED Talk.

Between You & Me: Confessions of a Comma Queen by Mary Norris. The longtime New Yorker copy editor shares her three-decades-long accumulation of grammar knowledge, helping readers dodge common — and perplexing — errors. She speaks in Session 6.

Birth of a Theorem: a Mathematical Adventure by Cédric Villani. The acclaimed mathematician takes readers on a journey inside cracking physics’ Landau Damping theorem, work that led him to win the 2010 Fields Medal. Villani will speak in Session 2.

Me, Myself, and Us: The Science of Personality and the Art of Well-Being by Brian Little. Psychology professor Little unpacks decades of research in a quest to answer this key question: is personality fixed or is it ever-evolving? He will speak in Session 4.

Just for Fun: The Story of an Accidental Revolutionary by Linus Torvalds. A dedicated coder shares how — and why — he built the groundbreaking free software Linux. Torvalds speaks in Session 6. 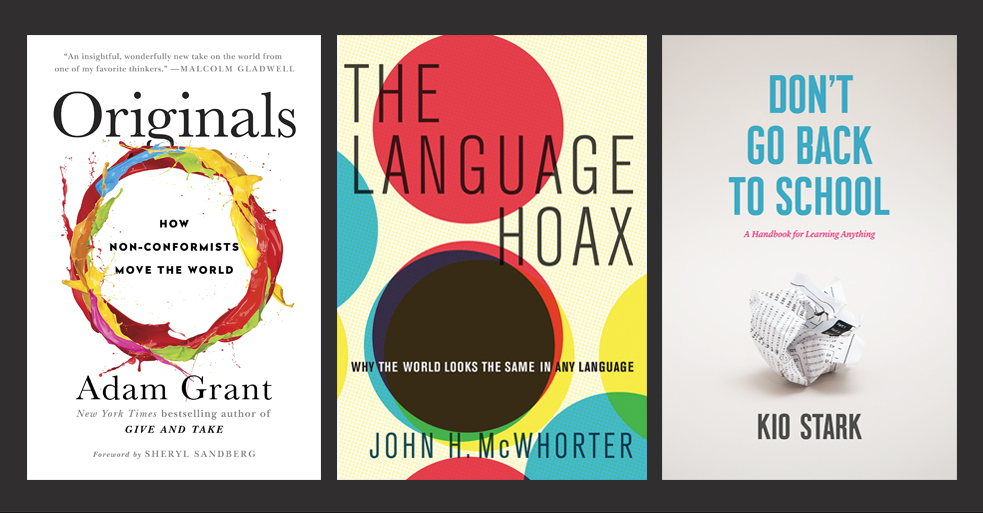 Satellite Remote Sensing for Archeology by Sarah Parcak. This year’s TED Prize winner literally wrote the textbook on how satellite remote sensing can be used in global field projects, looting prevention and site preservation. Parcak will make her bold wish in Session 5. Watch her TED Talk from TED2012.

Moonshots in Education: Launching Blended Learning in the Classroom by Esther Wojcicki. A teacher’s comprehensive guide for integrating digital and online learning into the classroom. Wojcicki speaks during TED University.

Between Earth and Sky: Our Intimate Connections to Trees by Nalini Nadkarni. A brilliant mix of photography, personal narrative and information fused into a guide about the deep connection between humanity, trees and their rich canopies. Nadkarni will speak at TED University; you can watch her previous TED Talks.

Don’t Go Back to School: A Handbook for Learning Anything by Kio Stark. A guide on learning, minus the school. This survey of more than 100 independent learners shows how to forgo higher education while gaining the skills you need. Stark, a novelist and writer, will speak in Session 4.

Women Who Don’t Wait in Line: Break the Mold, Lead the Way by Reshma Saujani. An honest look into why so many women are still not in top levels of corporations and government — and what we can do about it. Saujani, founder of Girls Who Code, speaks in Session 6.

Originals: How Non-Conformists Move the World by Adam Grant. Packed with studies from politics, business, sports and entertainment, this guide urges readers to go against the grain to make lasting change. Grant, a psychology professor at Wharton, will speak in Session 4.

The Conservative Heart: How to Build a Fairer, Happier, and More Prosperous America by Arthur Brooks. A provocative case for a new brand of conservatism — one that adds meaning to life through combating poverty, promoting equality and celebrating success. Brooks will speak in Session 9.

Project Rebirth: Survival and the Strength of the Human Spirit from 9/11 Survivors by Courtney E. Martin. Martin, a writer, partners with psychoanalyst Dr. Robin Stern to document how nine people, whose lives were forever changed by 9/11, move towards resilience and peace in the face of grief. This book was written in conjunction with the documentary Rebirth.  Courtney E. Martin speaks in Session 12. Watch her previous TED Talk.

How to Run the World: Charting a Course to the Next Renaissance by Parag Khanna. It’s time for a new kind of global diplomacy, one that dismantles rigid dichotomies of the past while tackling today’s most pressing problems. Khanna will speak in Session 7; you can watch his previous TED Talk.

Who Speaks For Islam?: What a Billion Muslims Really Think by Dalia Mogahed. This six-year Gallup Poll of the Muslim world gives voice to people left out of the conversation on increased discrimination, Islamophobia and terrorist attacks. Mogahed speaks in Session 7; you can watch her previous TED Talk.

The Future: Six Drivers of Global Change by Al Gore. A radical, comprehensive look at six forces, including economic globalization and digital communication, that are ushering in unprecedented change worldwide. Gore will speak in Session 8; watch his previous TED Talks.

The Small Backs of Children: A Novel by Lidia Yuknavitch. A gripping novel about how an iconic photograph of a girl in war-torn Eastern Europe changes lives in unexpected ways. Yuknavitch speaks in Session 9.

Ellis Island: Ghosts of Freedom by Stephen Wilkes. A photographer’s five-year study of an abandoned Ellis Island hospital, where overgrown vines and trees burst through the floorboards. Wilkes will speak in Session 12.

Year of Yes: How to Dance it out, Stand in the Sun and Be Your Own Person by Shonda Rhimes. In a memoir, this TV powerhouse shares how a year of saying “yes” to everything that scarred allowed her to fully embrace life — and how you can do the same. Shonda Rhimes will speak in Session 1.

Last Night on Earth by Bill T. Jones. A dance icon shares a meditative, stunning memoir that tracks his signature blend of art and activism throughout the decades. Bill T. Jones speaks in Session 1; watch his breathtaking improvisation from TED2015.

Even This I Get to Experience by Norman Lear. The Hollywood heavyweight who created All in the Family, Good Times and The Jeffersons shares his memoir, capturing the life lessons that shaped his legendary career. Lear will speak in Session 5.

TED2016 happens February 15-19, 2016, in Vancouver, Canada. Check the TED Blog and the @TEDNews twitter feed for live coverage. And in the meantime, read about the speaker program. 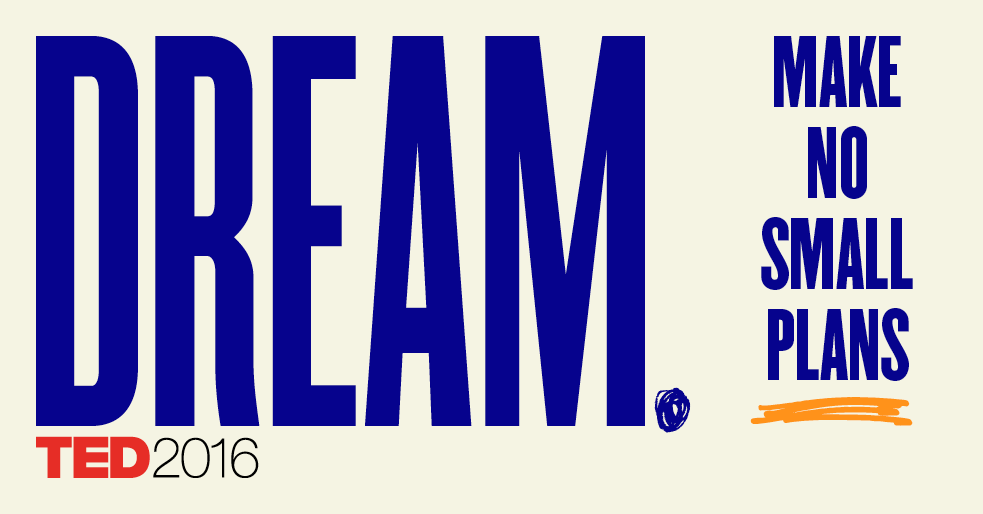