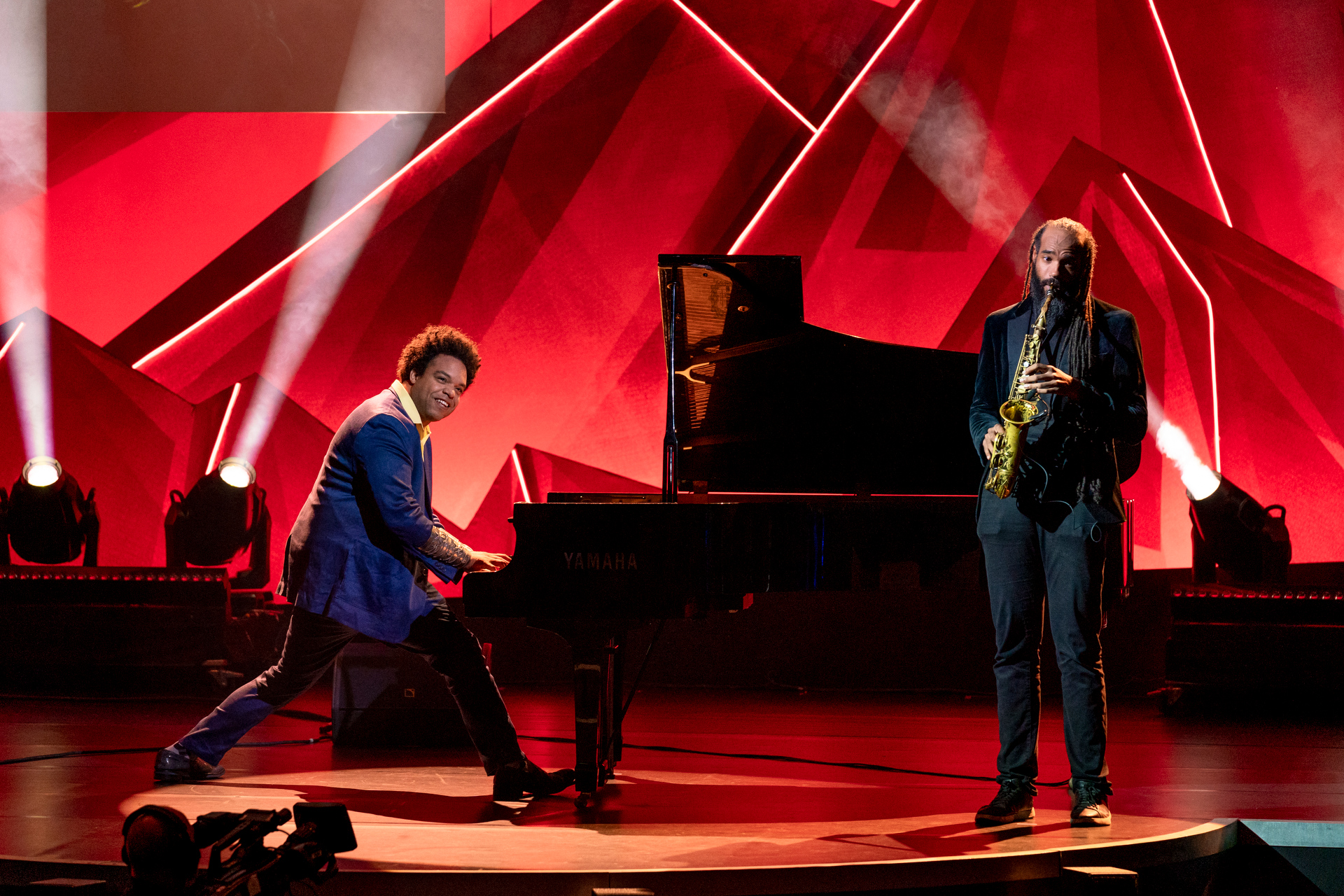 ELEW and Marcus Miller blend jazz improvisation with rock in a musical cocktail of “rock-jazz.” They perform at TEDSummit: A Community Beyond Borders, July 24, 2019, in Edinburgh, Scotland. (Photo: Dian Lofton / TED)

To keep pace with our ever-changing world, we need out-of-the-box ideas that are bigger and more imaginative than ever. The speakers and performers from this session explore these possibilities, challenging us to think harder about the notions we’ve come to accept.

When and where: Wednesday, July 24, 2019, 9am BST, at the Edinburgh Convention Centre in Edinburgh, Scotland

Music: A virtuosic violin performance by Min Kym, and a closing performance by ELEW featuring Marcus Miller, blending jazz improvisation with rock in a musical cocktail of “rock-jazz.” 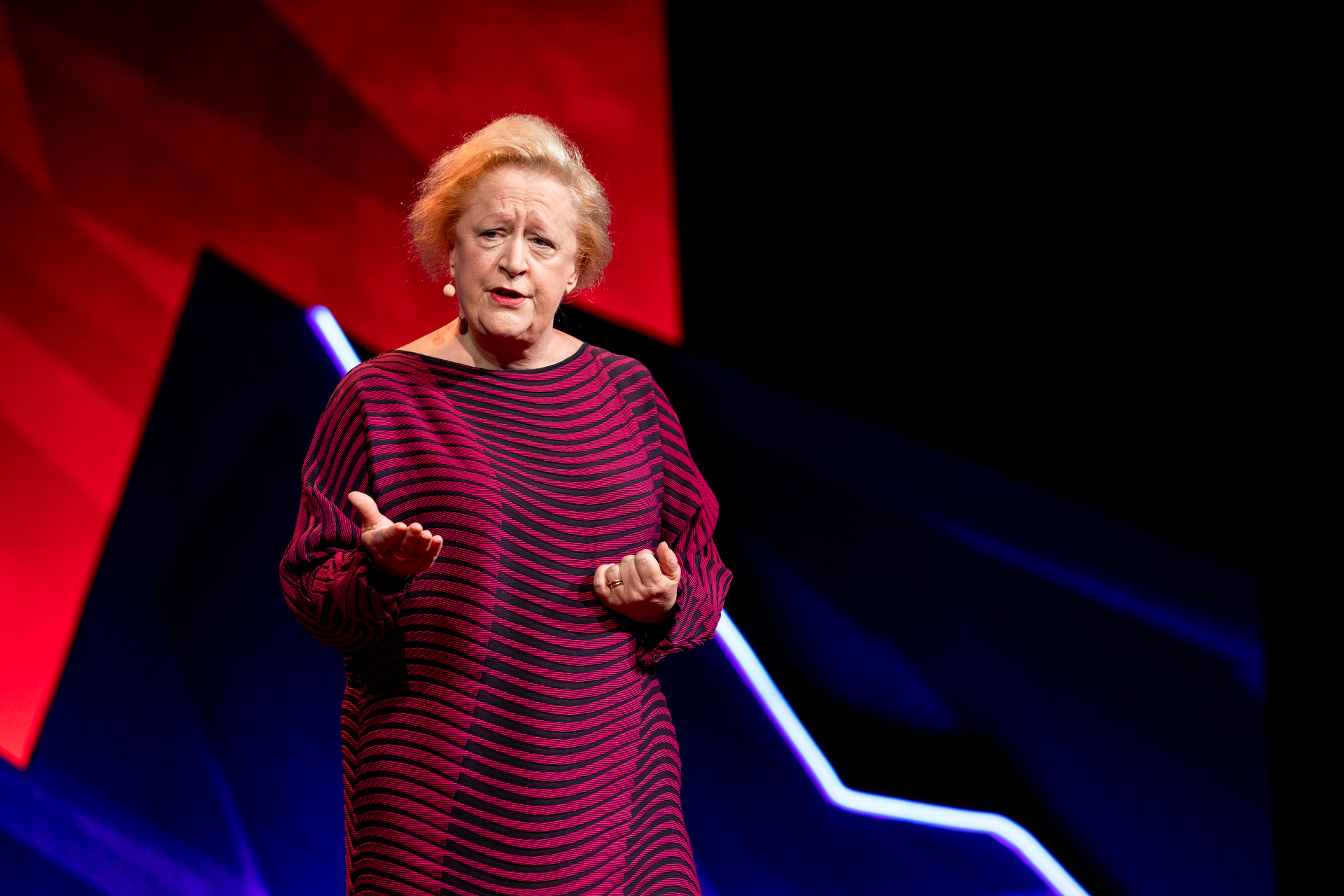 “The more we let machines think for us, the less we can think for ourselves,” says Margaret Heffernan. She speaks at TEDSummit: A Community Beyond Borders, July 24, 2019, in Edinburgh, Scotland. (Photo: Dian Lofton / TED)

Big idea: The more we rely on technology to make us efficient, the fewer skills we have to confront the unexpected. That’s why we must start practicing “just-in-case” management — anticipating the events (climate catastrophes, epidemics, financial crises) that will almost certainly happen but are ambiguous in timing, scale and specifics.

Why? In our complex, unpredictable world, changes can occur out of the blue and have outsize impacts. When governments, businesses and individuals prioritize efficiency above all else, it keeps them from responding quickly, effectively and creatively. That’s why we all need to focus on cultivating what Heffernan calls our “unpredictable, messy human skills.” These include exercising our social abilities to build strong relationships and coalitions; humility to admit we don’t have all the answers; imagination to dream up never-before-seen solutions; and bravery to keep experimenting.

Quote of the talk: “The harder, deeper truth is that the future is uncharted, that we can’t map it until we get there. But that’s OK because we have so much capacity for imagination — if we use it. We have deep talents for inventiveness and exploration — if we apply them. We are brave enough to invent things we’ve never seen before. Lose these skills and we are adrift. But hone and develop them, and we can make any future we choose.”

Big idea: Adversaries can be your best allies.

How? Three simple steps: reach out, listen and learn. As a “corporate suit” (his words), Bob Langert collaborates with his company’s strongest critics to find business-friendly solutions for society. Instead of denying and pushing back, he tries to embrace their perspectives and suggestions. He encourages others in positions of power to do the same, driven by this mindset: assume the best intentions of your critics; focus on the truth, the science and facts; and be open and transparent in order to turn critics into allies. The worst-case scenario? You’ll become better, your organization will become better — and you might make some friends along the way.

Fun fact: After working with NGOs in the 1990s, McDonald’s reduced 300 million pounds of waste over 10 years. 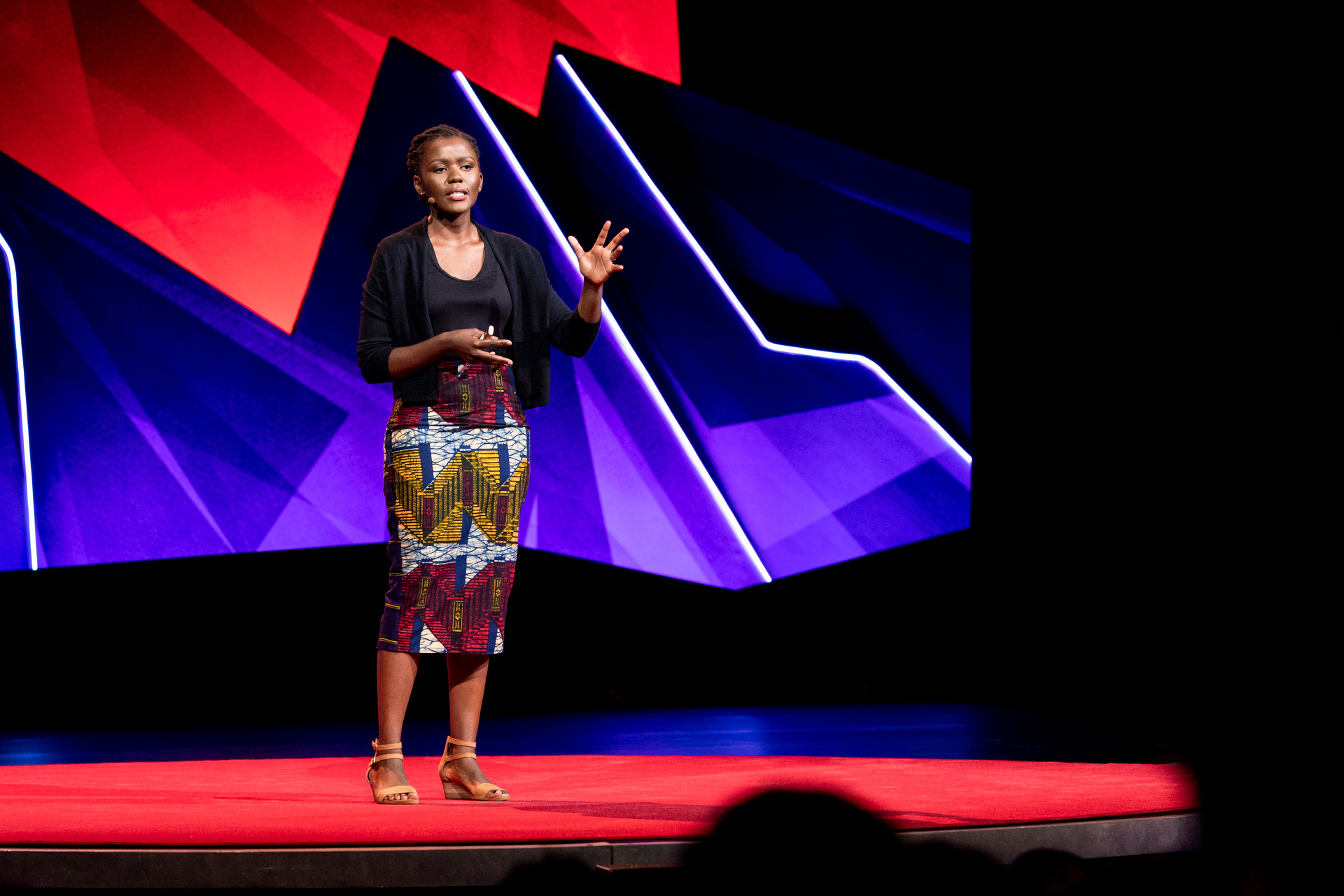 “When we talk about providing energy for growth, it is not just about innovating the technology: it’s the slow and hard work of improving governance, institutions and a broader macro-environment,” says Rose Mutiso. She speaks at TEDSummit: A Community Beyond Borders, July 24, 2019, in Edinburgh, Scotland. (Photo: Dian Lofton / TED)

Big Idea: In order to grow out of poverty, African countries need a steady supply of abundant and affordable electricity.

Why? Energy poverty, or the lack of access to electricity and other basic energy services, affects nearly two-thirds of Sub-Saharan Africa. As the region’s population continues to grow, we have the opportunity to build a new energy system — from scratch — to grow with it, says Rose Mutiso. It starts with naming the systemic holes that current solutions (solar, LED and battery technology) overlook: we don’t have a clear consensus on what energy poverty is; there’s too much reliance on quick fixes; and we’re misdirecting our climate change concerns. What we need, Mutiso says, is nuanced, large-scale solutions with a diverse range of energy sources. For instance, the region has significant hydroelectric potential, yet less than 10 percent of this potential is currently being utilized. If we work hard to find new solutions to our energy deficits now, everybody benefits.

Quote of talk: “Countries cannot grow out of poverty without access to a steady supply of abundant, affordable and reliable energy to power these productive sectors — what I call energy for growth.”

How? Economists must redefine and recognize true value creators, envisioning a system that rewards them just as much as CEOs, investors and bankers. We need to rethink how we value education, childcare and other “free” services — which don’t have a price but clearly contribute to sustaining our economies. We need to make sure that our entire society not only shares risks but also rewards.

Quote of the talk: “[During the bank bailouts] we didn’t hear the taxpayers bragging that they were value creators. But, obviously, having bailed out the biggest ‘value-creating’ productive companies, perhaps they should have.” 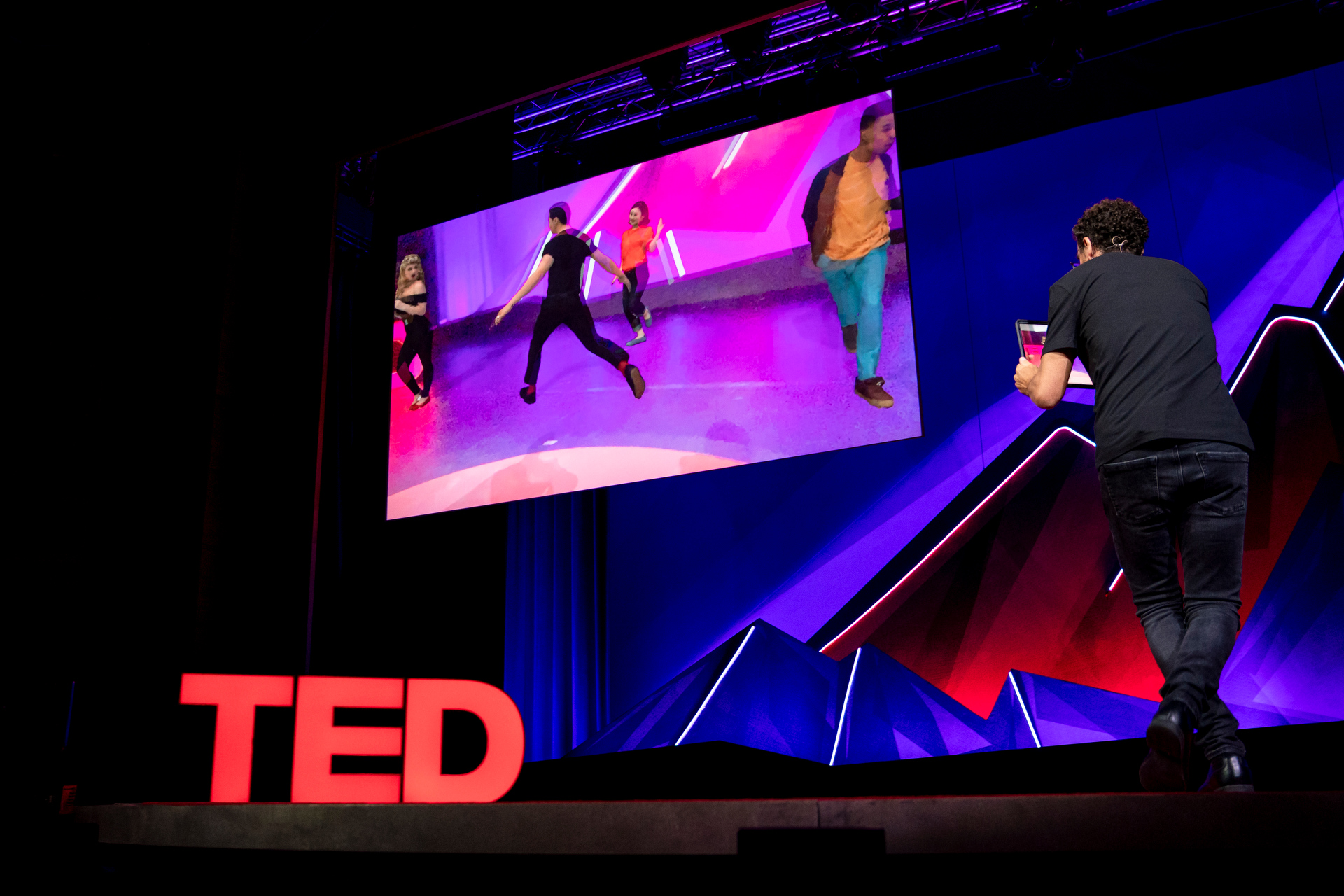 Big idea: Get ready for the next revolution in visual storytelling: volumetric video, which aims to do nothing less than recreate reality as a cinematic experience.

How? Movies have been around for more than 100 years, but we’re still making (and watching) them in basically the same way. Can movies exist beyond the flat screen? Yes, says Diego Prilusky, but we’ll first need to completely rethink how they’re made. With his team at Intel Studios, Prilusky is pioneering volumetric video, a data-intensive medium powered by hundreds of sensors that capture light and motion from every possible direction. The result is like being inside a movie, which you could explore from different perspectives (or even through a character’s own eyes). In a live tech demo, Prilusky takes us inside a reshoot of an iconic dance number from the 1978 hit Grease. As actors twirl and sing “You’re the One That I Want,” he positions and repositions his perspective on the scene — moving, around, in front of and in between the performers. Film buffs can rest easy, though: the aim isn’t to replace traditional movies, he says, but to empower creators to tell stories in new ways, across multiple vantage points.

Quote of the talk: “We’re opening the gates for new possibilities of immersive storytelling.”