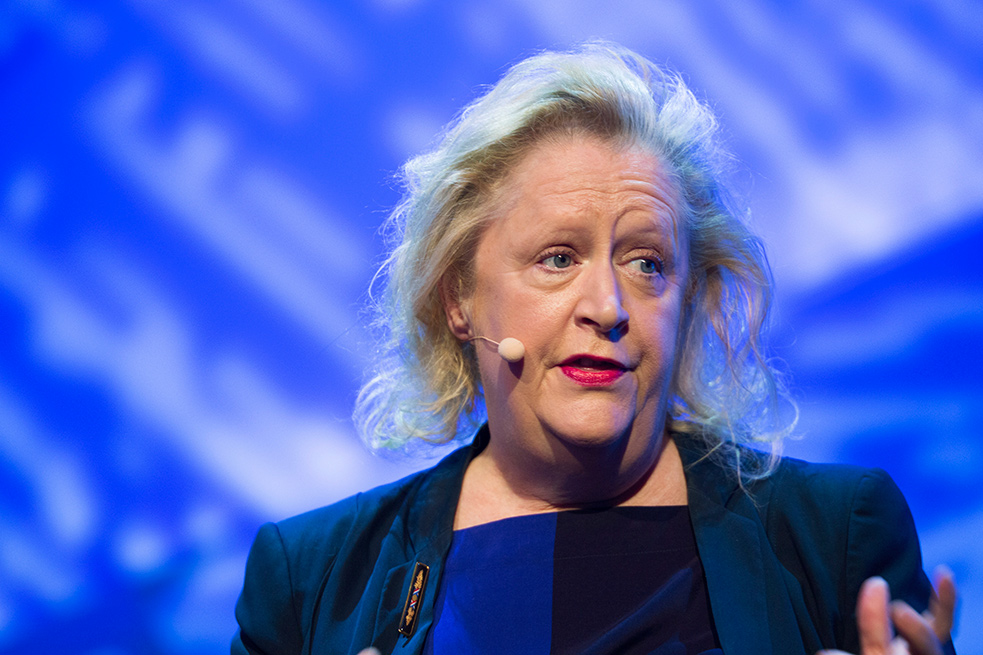 In her career, Margaret Heffernan has been the CEO of five businesses. What advice does she have for people just starting their careers? First: Get to know your coworkers. Photo: Paul Clarke/TED

It’s a few months after graduation, which means the luckiest new college grads are knee-deep into internships and entry-level jobs. How to stand out? Business writer Margaret Heffernan suggests: Start by taking a coffee break with your coworkers. Companies grow best, she suggests, when workers are connected by social bonds.

Heffernan’s TED Book, Beyond Measure: The Big Impact of Small Changes, rounds up the academic research that backs up her workplace-tested insights. She’s calling for managers to feed workers’ hunger for connection — and for workers to recognize that coffee breaks and hallway chats can actually make them more valuable, and valued, employees. (Learn more in her TED Talk, “Why it’s time to forget the pecking order at work.”)

Just before Heffernan hosted the TED@BCG conference, she sat down with curator Juliet Blake to offer advice for young people just starting their careers. Insights from their conversation:

The job requirement no one tells new hires about: Build your social capital.

“Social capital is a form of mutual reliance, dependency and trust. It hugely changes what people can do. This is more true now than ever. It’s impossible in modern organizations to know everything that you need to know. What you need are lots of people who know lots of different things. Collectively you’re smarter.

Social capital develops from people spending time together. I learned this when I was running my first software company. I hired lots of brilliant people, but felt that there was something wrong. I realized that everybody was so focused on their own work and tasks, that they didn’t know anything about the person sitting next to them. So I decided, “Okay — Friday afternoons at 4 o’clock everybody’s going to get together and three people are going to stand up and tell us who they are and what matters to them.” At the time I thought it was hokey. Even now, this doesn’t feel like elevated management thinking. But it completely changed the game. You need that level of trust to have the freedom to think and to have the really good kind of argument from which the best ideas emerge.”

Isn’t it different for this generation because of social media? Not really.

“We talk about millennials in a language of exceptionalism. I’m a little skeptical about that. Digital intelligence and techno-savvy is an entry-level requirement. But without social capital, it won’t get you very far.

I remember when I worked at the BBC, I was given a trainee who was making his first film. He had a first in mathematics from Oxford, and thought he was the smartest kid on the block. He had no concept that what he needed to do was to connect to the very rich network of social capital that existed within the team. So he wrote the film alone. He went in and shot it using his own lights — he didn’t ask for help from the unbelievably seasoned, prize-winning technicians he was working with. Surprise, surprise — the film was a mess. All he needed to do was invest a bit of time and effort in getting to know the people around him, and it would have been a completely different story.”

“In engineering, people talk about asset integrity, which means that you service the machinery before it breaks. In modern organizations, the work is thinking and the machinery is your brain. We know from cognitive science that there are hard limits to what the brain can deal with. And yet, there’s an awful lot in the way we work which flies in the face of that.

We think that if we work through the night, we’re being very clever. We’re not. We think we can work long hours — month after month, year after year — and that there won’t be any wear and tear. But there is.

I’m a big fan of mind wandering. I do my best thinking when I’m writing. Or when I stop thinking about a hard problem — how to deal with a client, how to fix a paragraph — and get up. You walk away from your desk, you do something mind-numbingly dull —hanging up the laundry or taking the dog out for a walk — and the idea will come to you.”

“The crucial thing around time management is Leslie A. Perlow’s observation that we have what we think of as “real work,” which requires thought and concentration. And then the other work of meetings, phone calls, video conferences and email. If you want to be profoundly more productive, separate those two. Do the thinking work uninterrupted, which will result in better work with less fatigue. And then do all the other stuff, comfortable in the knowledge that the real work is done. It will mean at the end of the day you’ll feel less fried.”

The advice I’d give my younger self…

“It’s the same advice I give my teenage kids. Grades aren’t everything. Learning is for the joy of learning; it’s not for the certificate. You have to set your own agenda. Question everything. I mean, this is a rod from my own back.

Learn more about Margaret Heffernan’s TED Book, Beyond Measure: The Big Impact of Small Changes. And read up on the talks from the TED@BCG event she hosted.