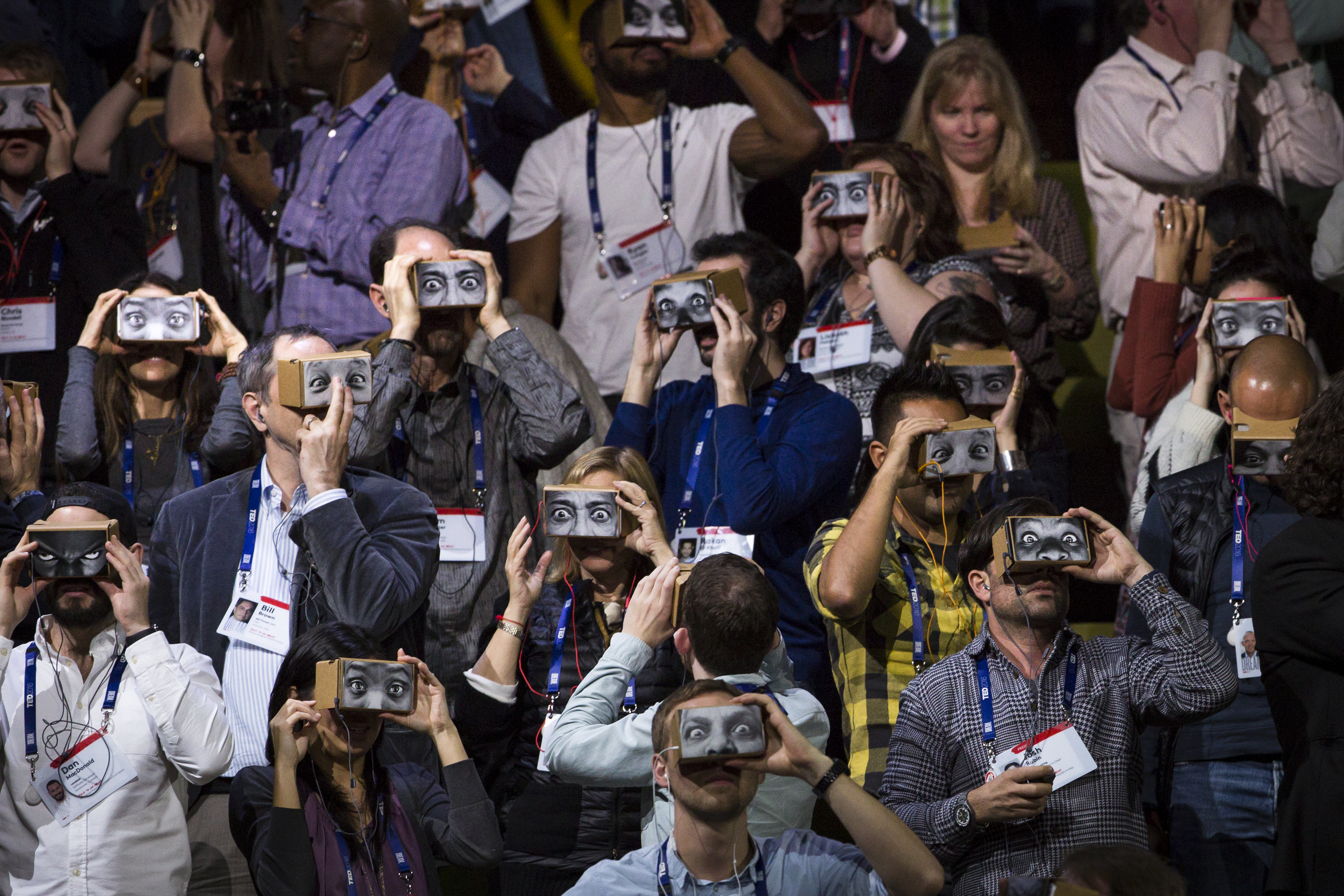 In a mass viewing of Chris Milk’s work with Vrse, the TED audience was transported to virtual worlds in Session 11 of TED2016, on Thursday, February 18, 2016. Photo: Marla Aufmuth / TED

“You’re about to participate in the largest collective VR viewing in history,” said Chris Milk in his talk on virtual reality at TED2016. “We are all going to watch something at the exact same time, together.”

A Google Cardboard and pair of Urban Ears headphones sat on every chair in the theater. We assembled the viewer, downloaded a special version of the Vrse app, and readied ourselves to step into other worlds at Milk’s prompting, beautiful cello music wafting through the theater. After a countdown, we found ourselves in an idyllic valley, surrounded by mountains, with a lake before us. A murmur of birds flew overhead, and as we followed them, a train emerged from the lake. Crash — some people in the audience scream. But then brightly-colored streamers swirl all around and we lift of the ground, the streamers weaving themselves into a tunnel. We go faster and faster through it.

Now, we feel like we’re floating beside a helicopter above New York City, watching artist JR take a photograph of the ground below. The floor does not feel there at all; we feel thousands of feet above the city with an unusual view of all the skyscrapers. Many gasp. (If you’re wondering about those eye images on the Google Cardboard viewers — they’re photos taken by JR, featured in this film.)

Finally, we see sand at our feet and white tents in the distance. We’re in a refugee camp, and a group of children runs up to us. We look down at their faces — it almost feels like you can almost make eye contact.

And then we are back. We take our seats again, and Milk finishes his talk. “I believe that everyone on Earth needs to experience what you just experienced,” he says. “That way we can collectively start to shape this not as a tech platform, but as a humanity platform.”

Creating virtual reality stories is a unique challenge and the medium is just starting to take form. But Milk predicts that this will have a lasting impact on the media landscape because: “VR makes us feel like we are part of something.”

Read more about Milk’s rules of directing VR — and his journey to this medium — in a recap of Session 11 at TED2016. 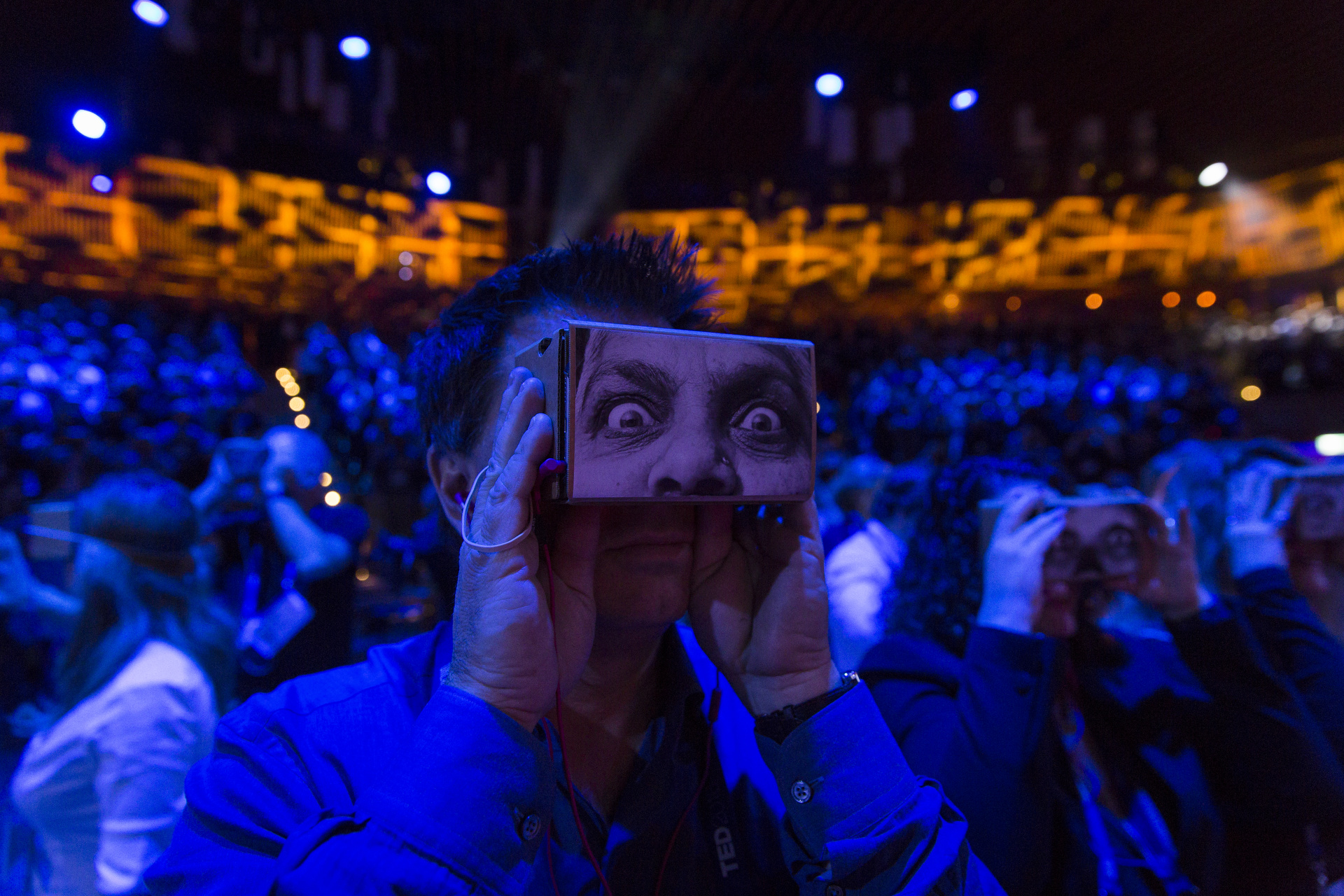 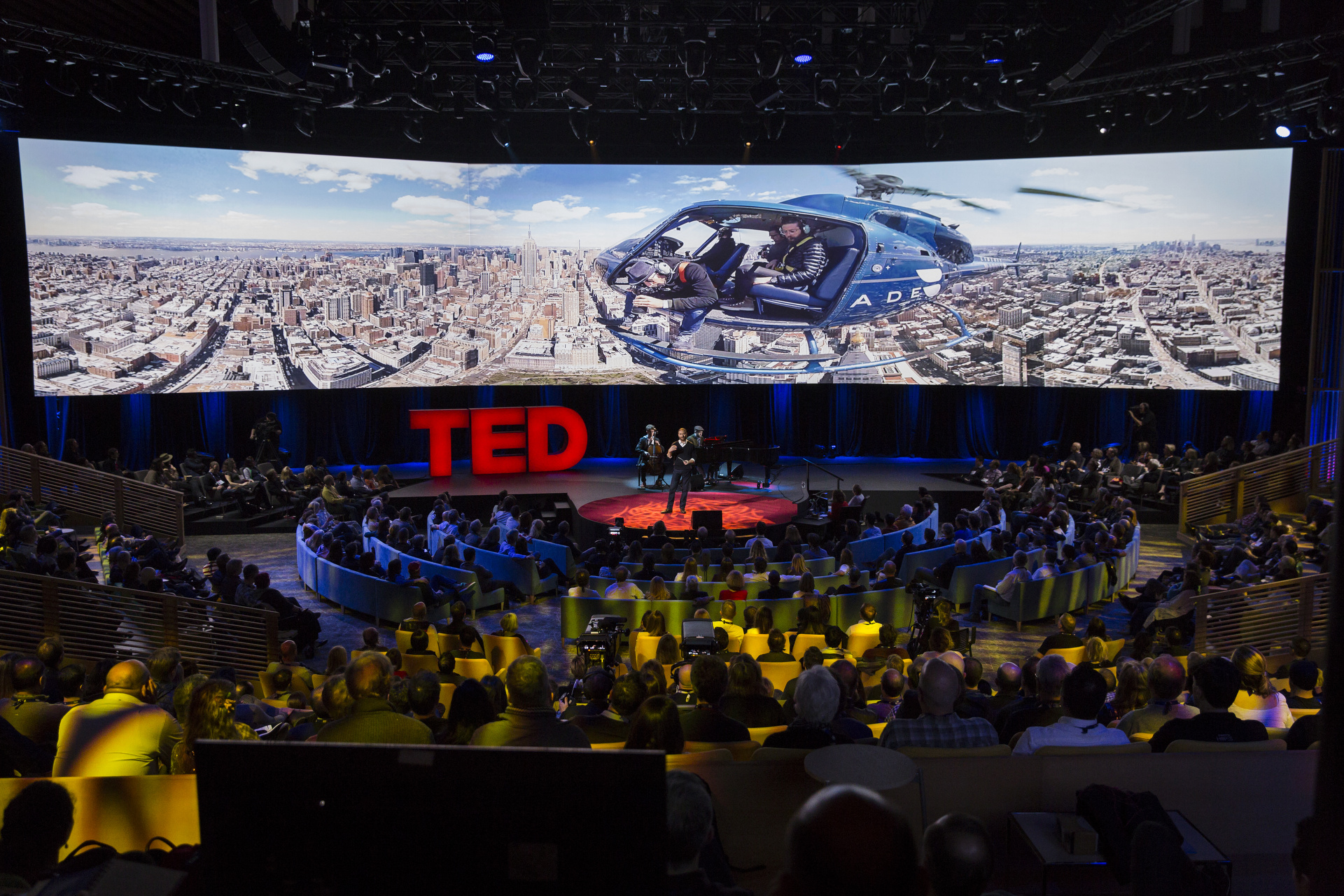 Audience members found themselves in the sky with artist JR, and it felt like no floor was below them. Photo: Marla Aufmuth / TED 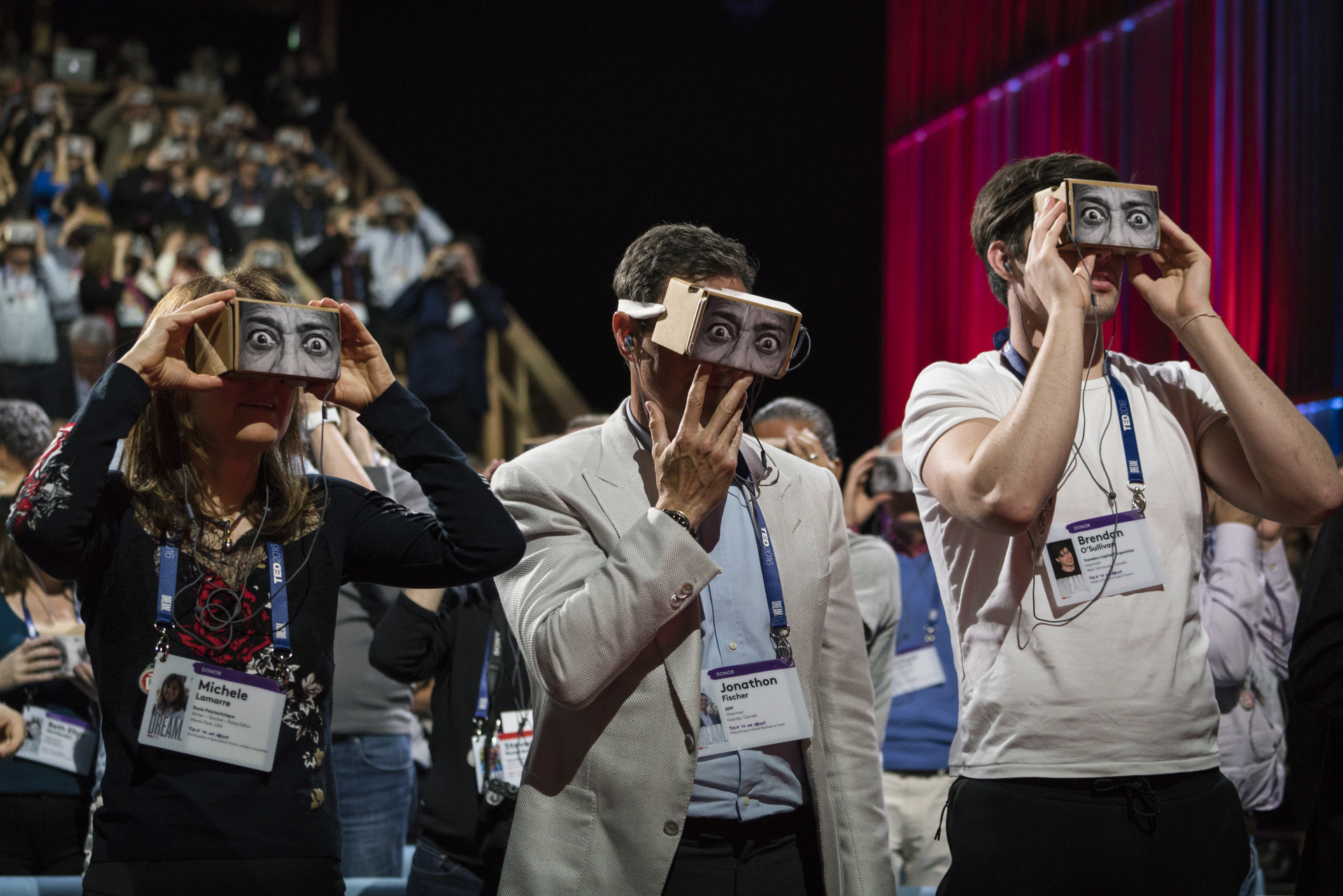 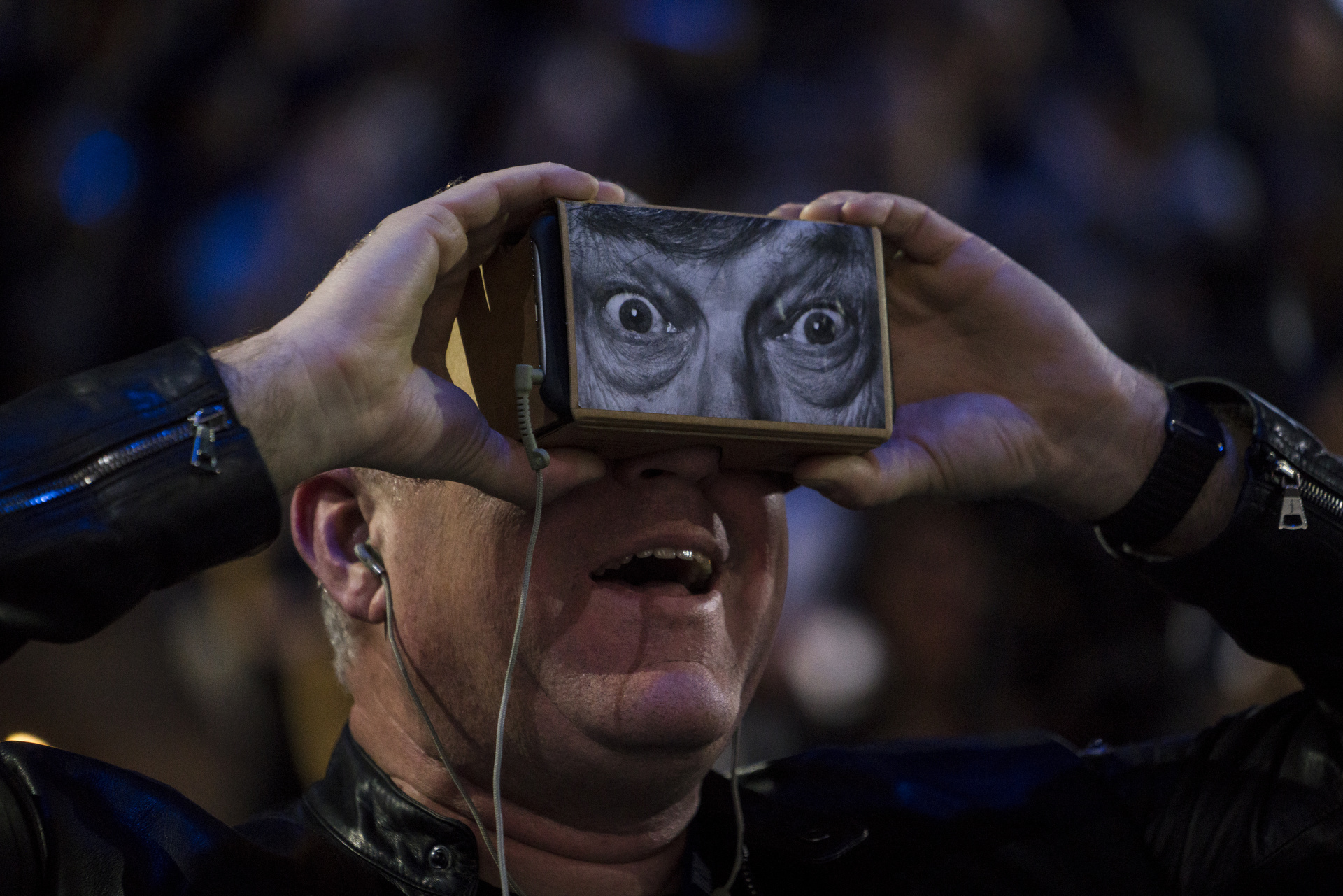 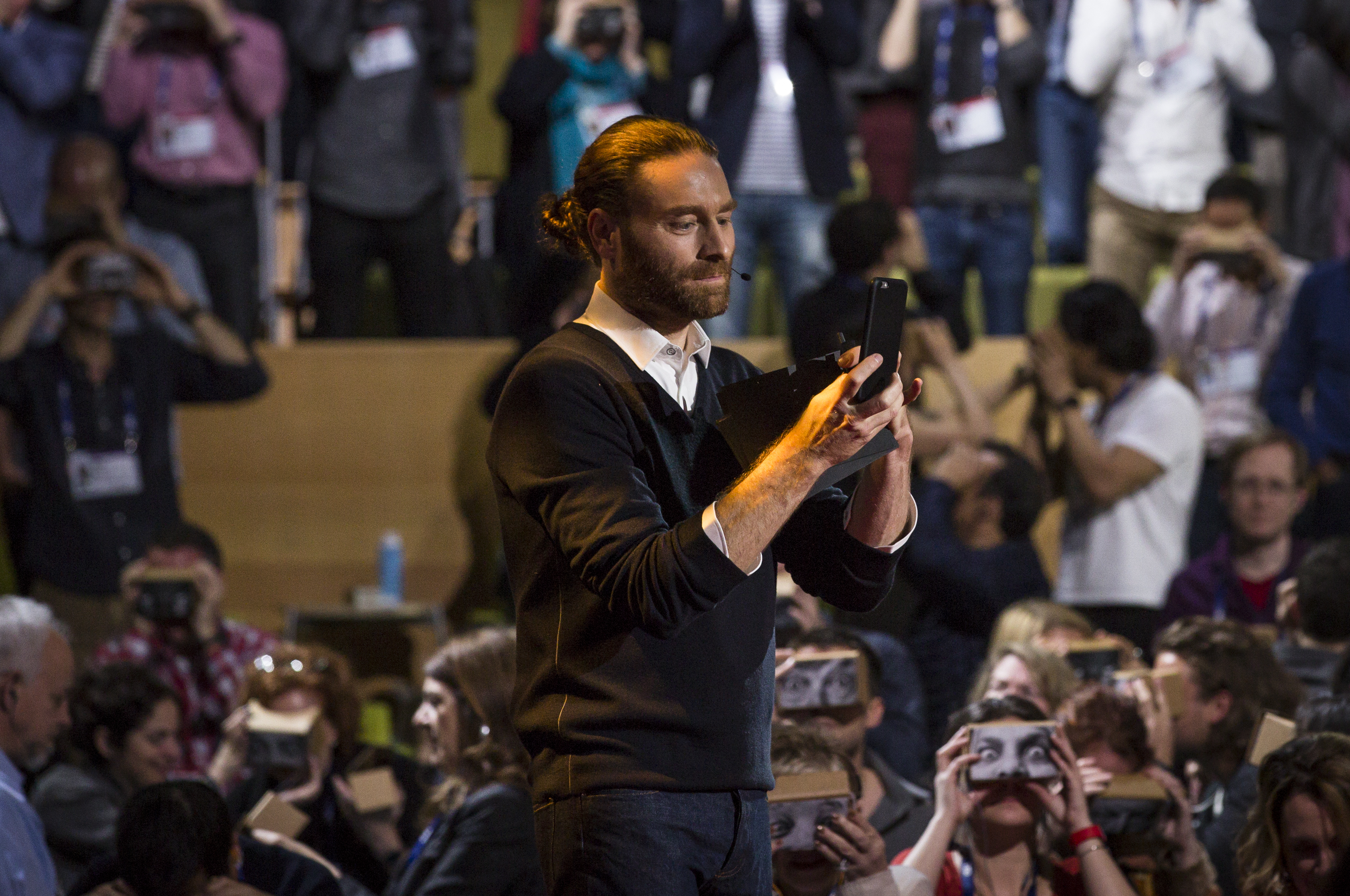 While onstage, Chris Milk takes a photo of the TED2016 audience as they use Google Cardboard viewers to watch his show reel. Photo: Marla Aufmuth / TED