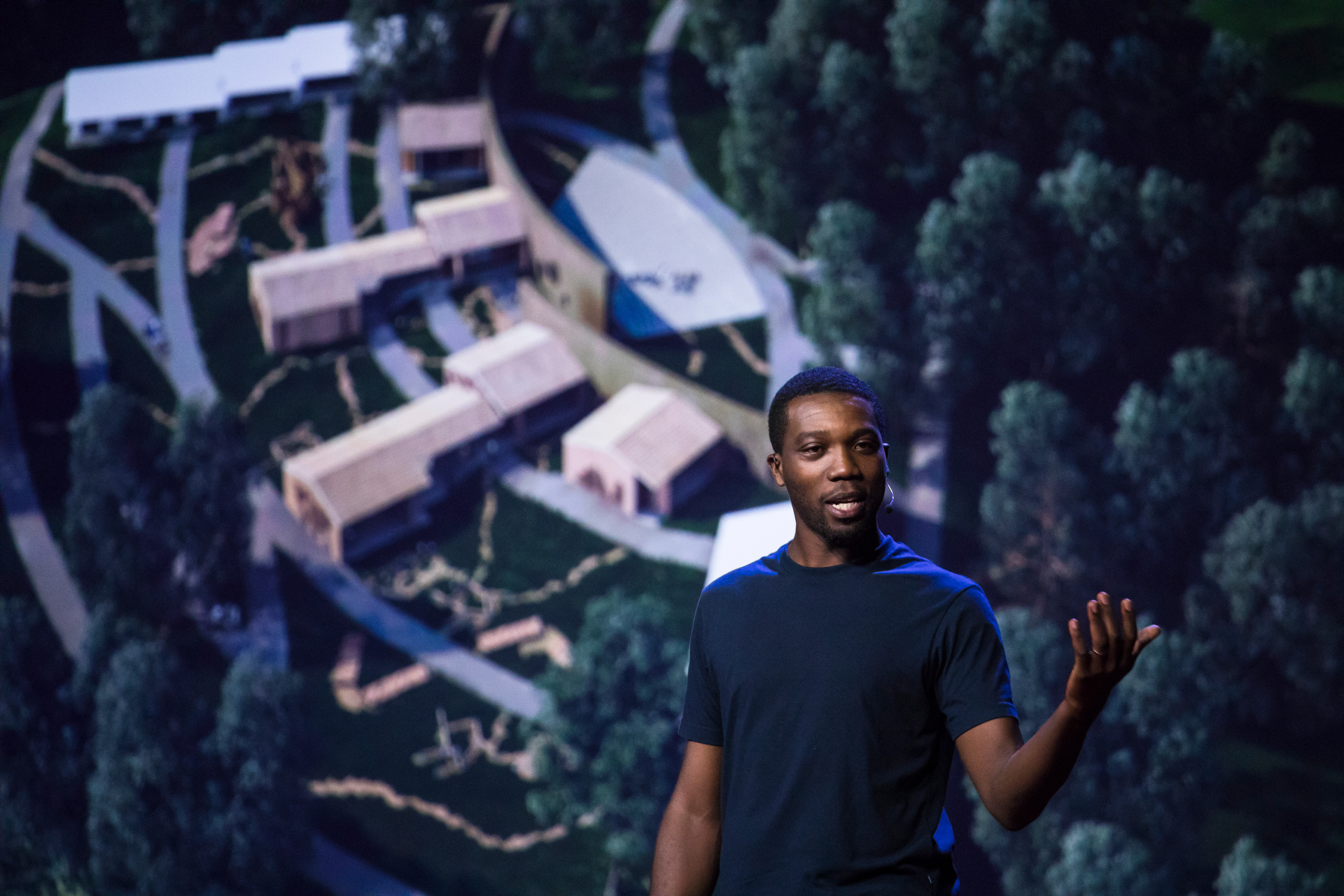 Cities are a constellation of dreams — dreams that are constantly dying and being born. Cities are living things, with character and distinct personalities. Africa’s cities teem with these dreams. Who gets to decide which ones live, and which ones die?

To become an architect, Christian Benimana had to go far away from home. There were no schools of architecture in Rwanda, so he travelled to Shanghai, where he observed that, though impressive, China’s urban city and housing infrastructure was built at great human and environmental cost. Rwanda now is witnessing a great building boom of its own, and Benimana has made it his mission to advocate for a model of architecture that is uniquely African, sustainable and equitable. From the coastal slums of Lagos, to Burkina Faso, Benimana cites examples of his ideal. A pan-African movement of architects, designers and engineers on the continent and in diaspora, learning, sharing and inspiring each other, is gathering steam. Benimana wants us to imagine future African cities not as vast slums but as the most resilient, the most socially inclusive places on earth. “This is achievable,” he says. “We have the talent to make it a reality.”

In Agbogbloshie, a community in Accra, people descend on a scrapyard to mine the electronic waste that is deposited there for recyclable materials. Without formal training, these scrap dealers often teach themselves the workings of electronics by taking them apart and putting them together again. On the other hand, Ghana is teeming with technical graduates with little real-world experience because there are no jobs. DK Osseo-Asare and his co-founder at Low Design Office wondered what would happen if they brought these two groups together. The result: a growing maker community where makers engage in peer-to-peer and practical, hands-on education, motivated by what they want to make. 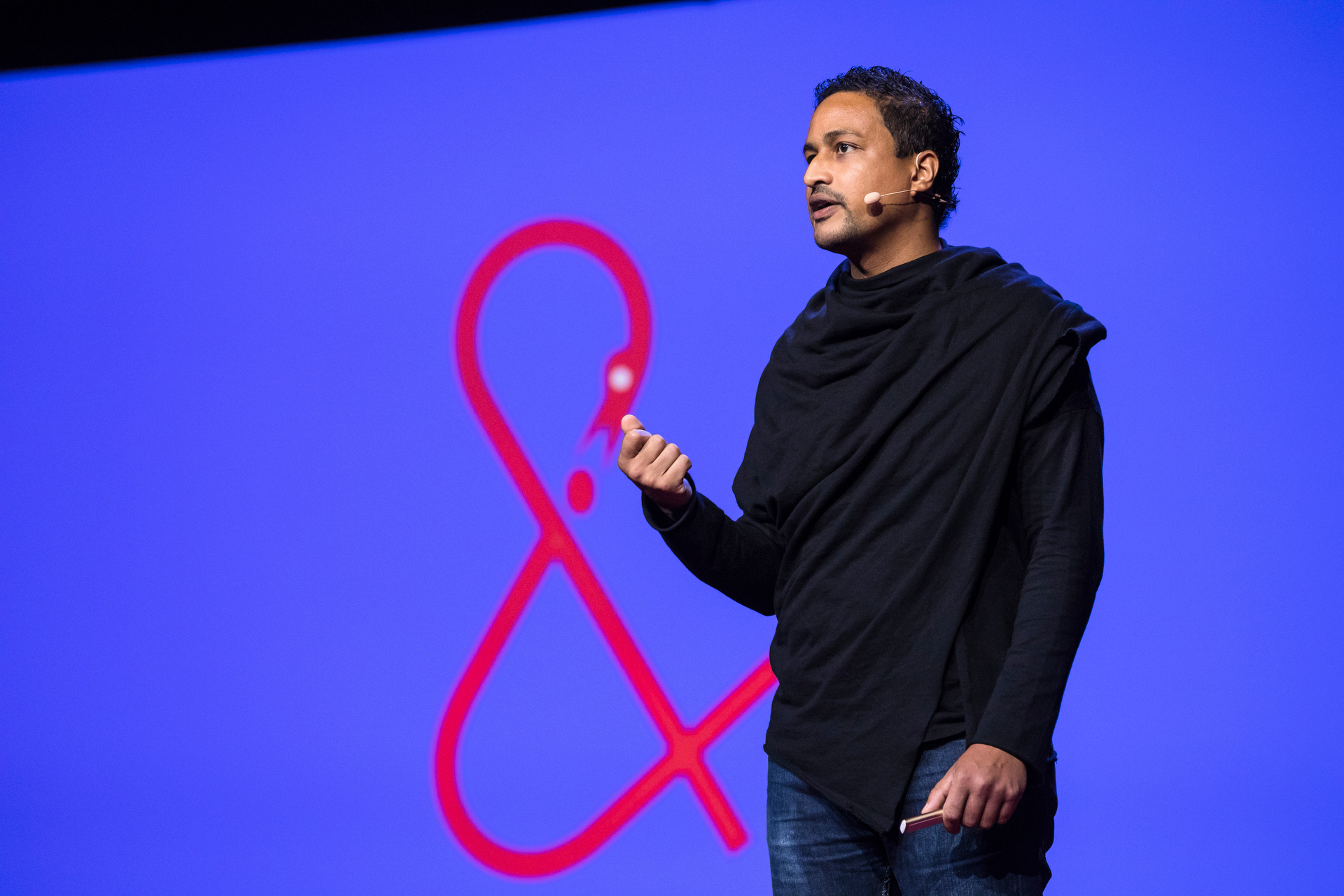 Designer DK Osseo-Asare wondered: What would happen if we linked a community of trained engineers in Accra with the self-taught techies who mine local scrapyards for parts? Amazements. Behind him is the symbol of sankofa, which often means “go back and get it” — a representation of mining what we have to make something new. Photo: Ryan Lash / TED

While global pundits talk about a theoretical future of sharing economies, Robert Neuwirth studies the way they work right now, right here in Africa — and have for centuries. Think of it as mutual-aid capitalism. In Nigeria, Igbo traders take on apprentices who work for them for a number of years. When the apprenticeship ends, the trader “settles” the apprentice — sets them up in business with working capital and a couple years of rent. It’s perhaps “the largest business incubator platform in the world.” Neuwirth also describes a money merry-go-round — call them group grants, kitty parties — in which everyone puts money in a pot, and once a week or month, one person gets the money to do as they please. It sounds a lot like the Yoruba Ajo system, and similar to the acequias system of water management that’s worked for hundreds of years in Spanish communities. As Neuwirth argues, many African business communities and markets already operate on mutual sharing principles, which if studied, propagated and scaled could lead to immense returns. 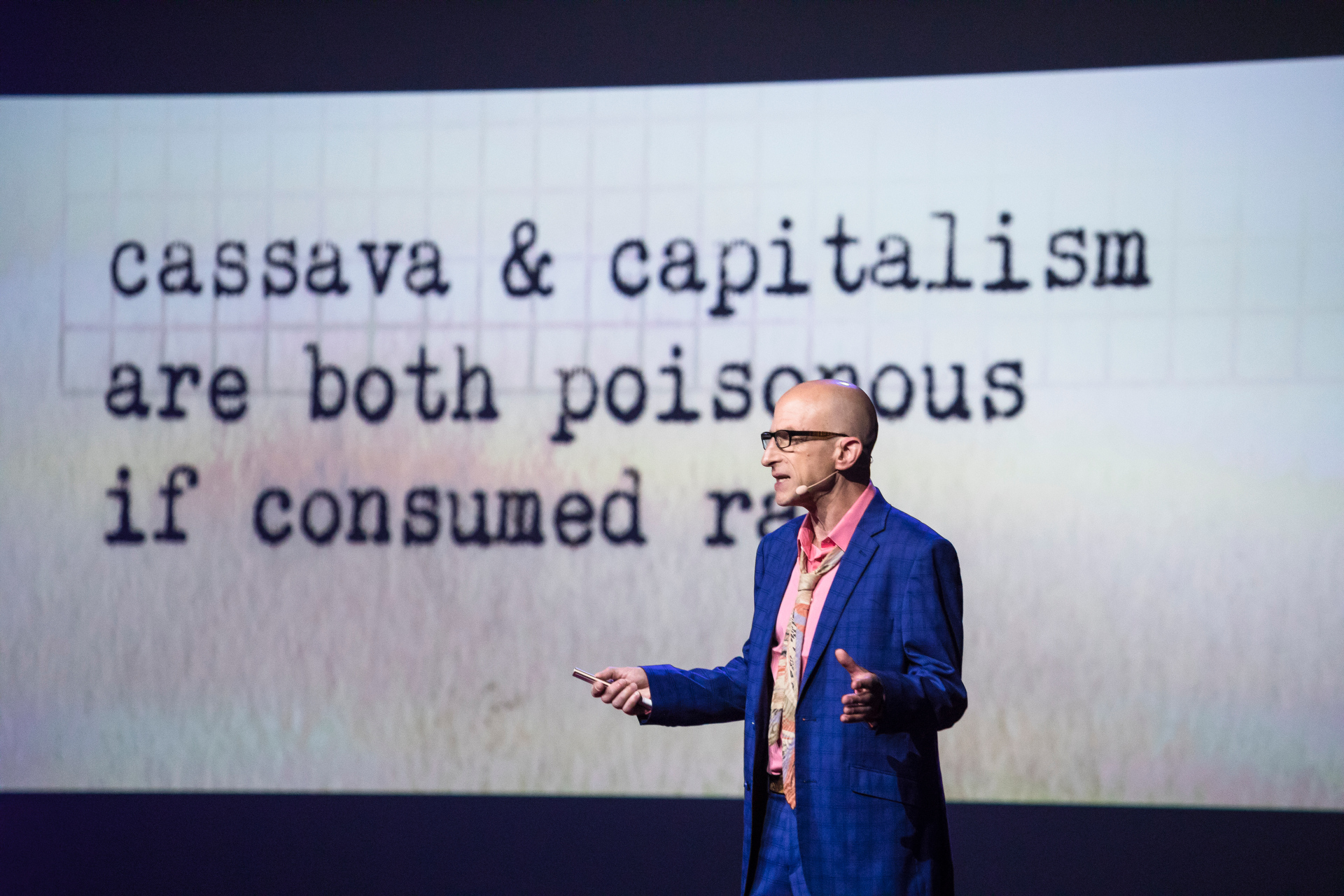 Robert Neuwirth studies informal economies — and makes the case that, as modern and high tech as the “sharing economy” may sound, it’s been happening within African economies all along. Photo: Bret Hartman / TED

What can you do when the wheels of justice don’t turn fast enough? Or they just don’t turn at all? Vivek Maru is getting people to look at and engage the law in a different way than they are used to. “If we are going to make access to justice a reality, we need to transform the relationship between people and law,” Maru says. “We need to turn law from an abstraction or a threat into something that every single person can understand, use, and shape.” Instead of relying solely on lawyers, Maru started a global network of paralegals who serve in their own communities. These paralegals break the law down into simple terms to help find solutions to the problems at hand. Most important, they don’t focus on the courts alone, they look everywhere: local government, ministry departments, an ombudsman’s office. This apparently unconventional approach to using the law has proven to be very effective in helping socially excluded people claim their rights, and forcing corporations who are running roughshod over the rights of the people in surrounding communities to do the right thing. 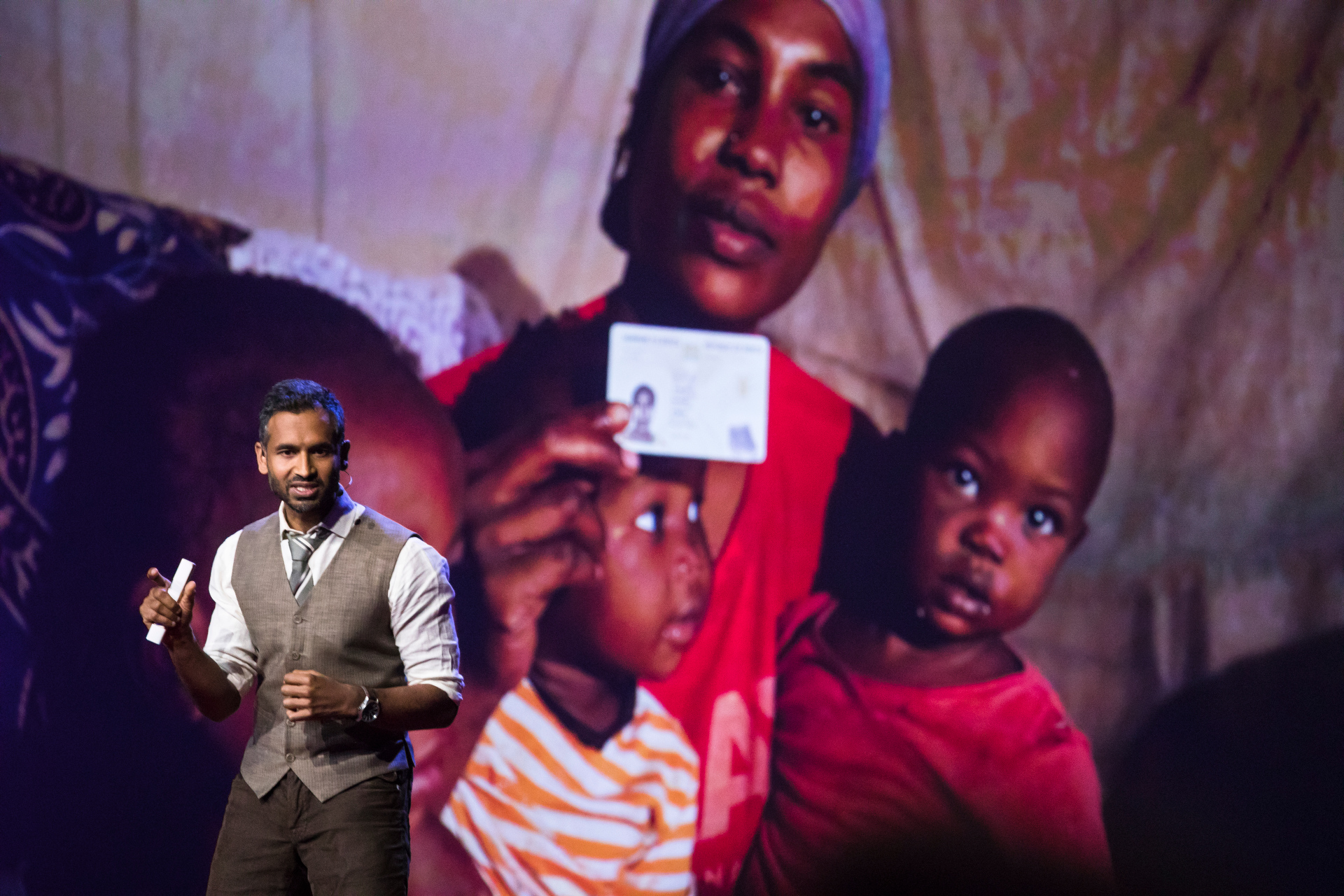 Vivek Maru is training locals to act as legal advocates in their own communities, giving many more people access to the protections of the law. Behind him is a portrait of Khadija Hamsa, who worked with a paralegal who helped her get a hard-to-get ID card. Photo: Bret Hartman / TED

When governments resolve to conjure megacities, the poor are often the first to be sacrificed. OluTimehin Adegbeye delivers a moving talk about how unconstitutional government-instigated land grabs are destroying the lives of thousands who live in scores of coastal communities on the coast of Lagos to make way for a “new Dubai.” These people, she explains, who settled in Lagos more than a hundred years ago would never have dreamed that the city that would grow around them would turn around one day to say that they didn’t belong there. Now they are being driven out to make way for a new megacity, simply for the crime of being poor. Adegbeye says: “We must hold our governments and ourselves accountable for keeping our shared cities safe for everyone in them. The only cities worth building, indeed the only futures worth dreaming of, are those that include all of us, no matter who we are or how we make homes for ourselves.”

PS: There were other audience talks that broke our hearts, made us cry, then mended them back again that I am not able to describe in detail, but I would like to mention anyway: Peter Manson Ouko’s story of bravery, refusal to be defeated and eventual triumph over a broken justice system, and Christopher Ategeka’s call to the audience to adopt a child and give them the same life-changing opportunity he was given by total strangers in 2006. 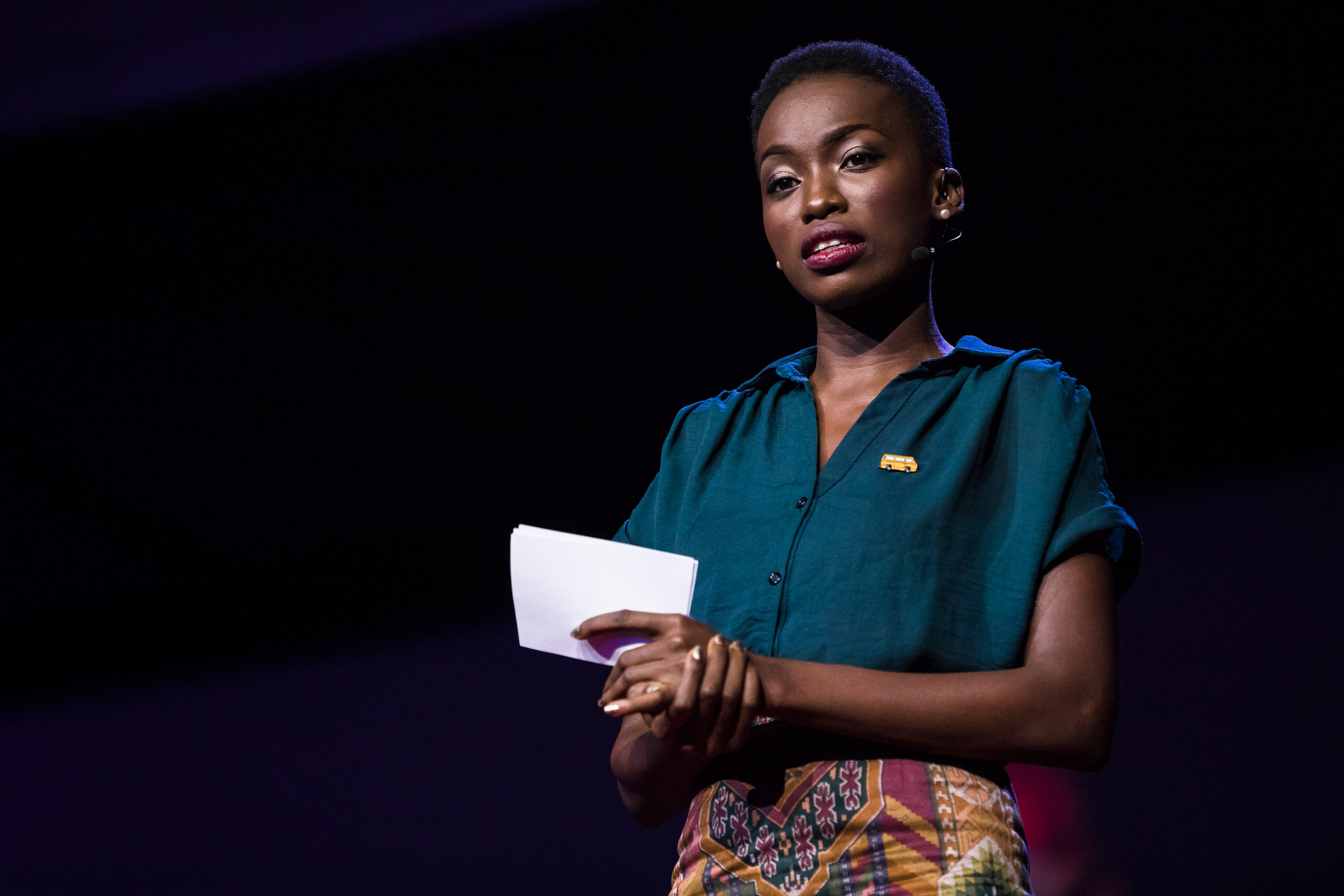 OluTimehin Adegbeye makes a stirring and powerful case for protecting city residents, no matter their economic level. Because, as she says, “the only cities worth building, indeed the only futures worth dreaming of, are those that include all of us.” Photo: Ryan Lash / TED