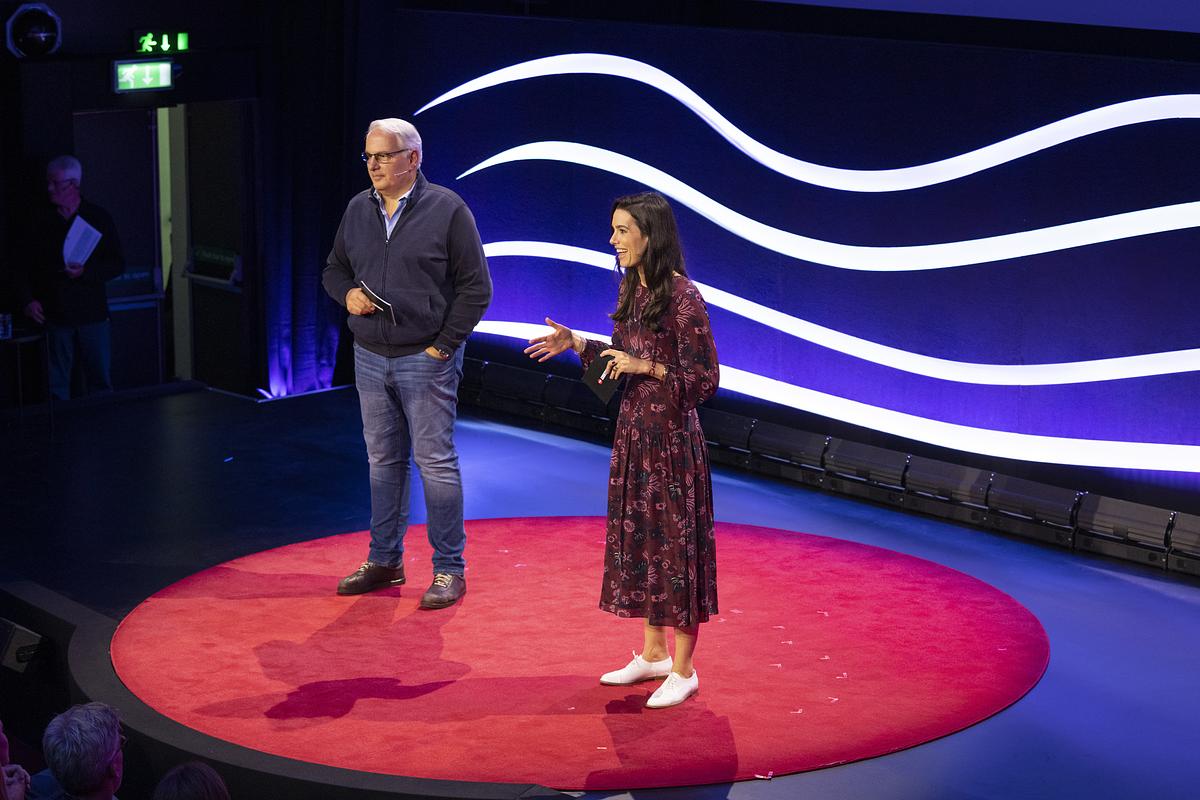 Countdown, TED’s climate action initiative founded in partnership with Leaders’ Quest, launched three years ago with a focus on accelerating solutions to climate change. The goal: to build a better future by cutting greenhouse gas emissions in half by 2030 in the race to a zero-carbon world — a world that’s safer, cleaner and fairer for everyone.

Countdown set off to London to tackle the many challenges of confronting climate change — but also to present the many solutions. Nine speakers (and two performers) took us inside their innovative work, from the power of socially engaged art and the importance of centering Indigenous expertise to the latest on direct air capture technology and the potential of establishing a multi-billion-dollar carbon removal industry.

When and where: Monday, October 3, 2022, at the Barbican Centre in London 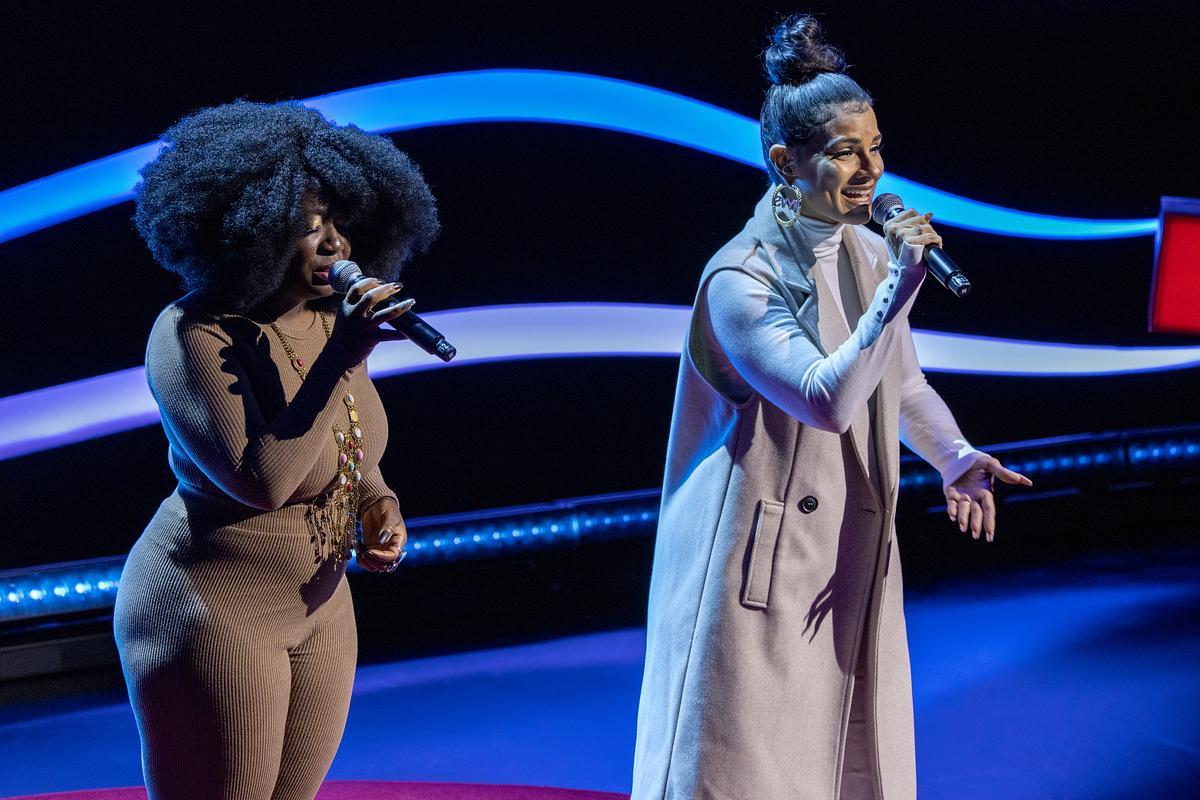 Music: From artists MyVerse and Kristen Warren, who perform their original song “Mother’s Mind” — a rousing message told from the perspective of Mother Earth. 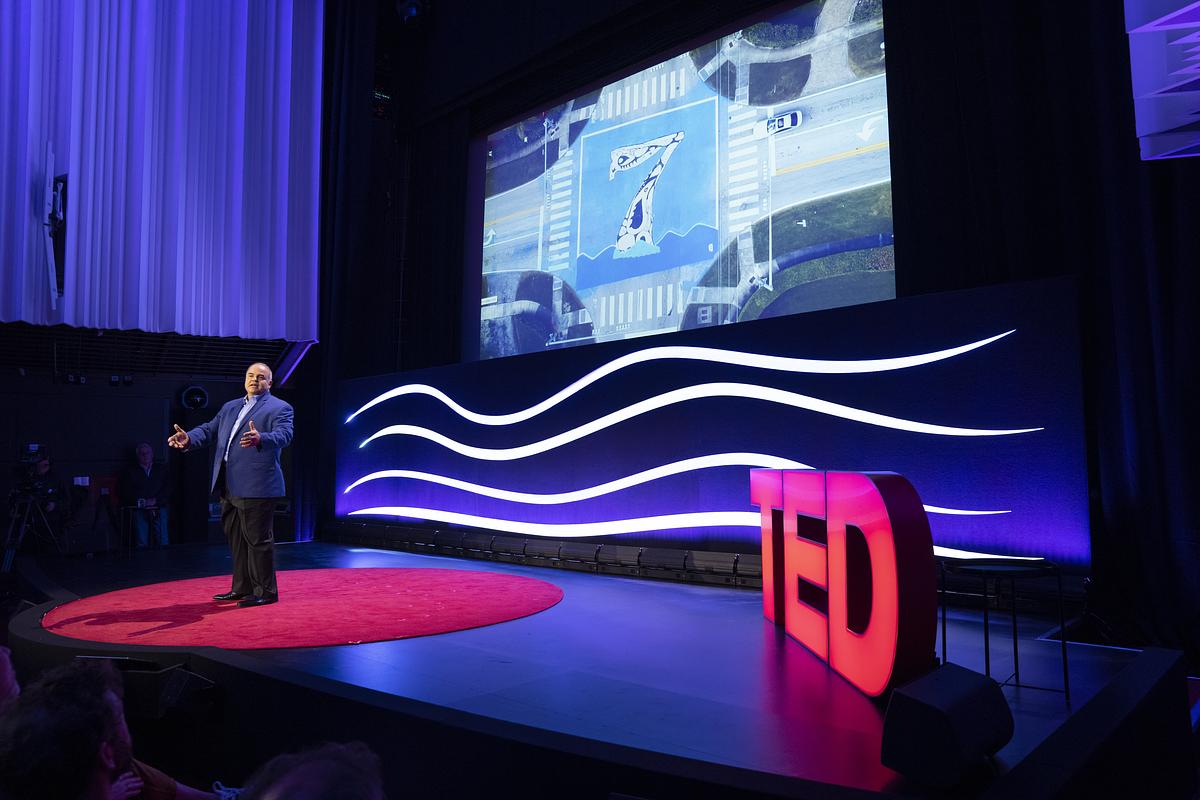 How? It took a voyage to Antarctica for artist Xavier Cortada to appreciate just how dire the situation was in his home city of Miami. When he returned home, he founded the Underwater Homeowners Association: an art project designed to get his fellow Miamians to think about where all that melting Antarctic ice is going to end up. Using Cortada’s “ice paintings” as a backdrop, participants created signs displaying their homes’ height above sea level. These weren’t political signs — they were simple elevation markers — yet their unsettling message quickly excited controversy. Many realtors and homeowners were terrified the signs would affect property values. Even when the city reconsidered its support for the project, the Underwater HOA continued to meet and strategize. Cortada’s work provides a blueprint for how socially engaged art can generate a sense of collective responsibility and agency. 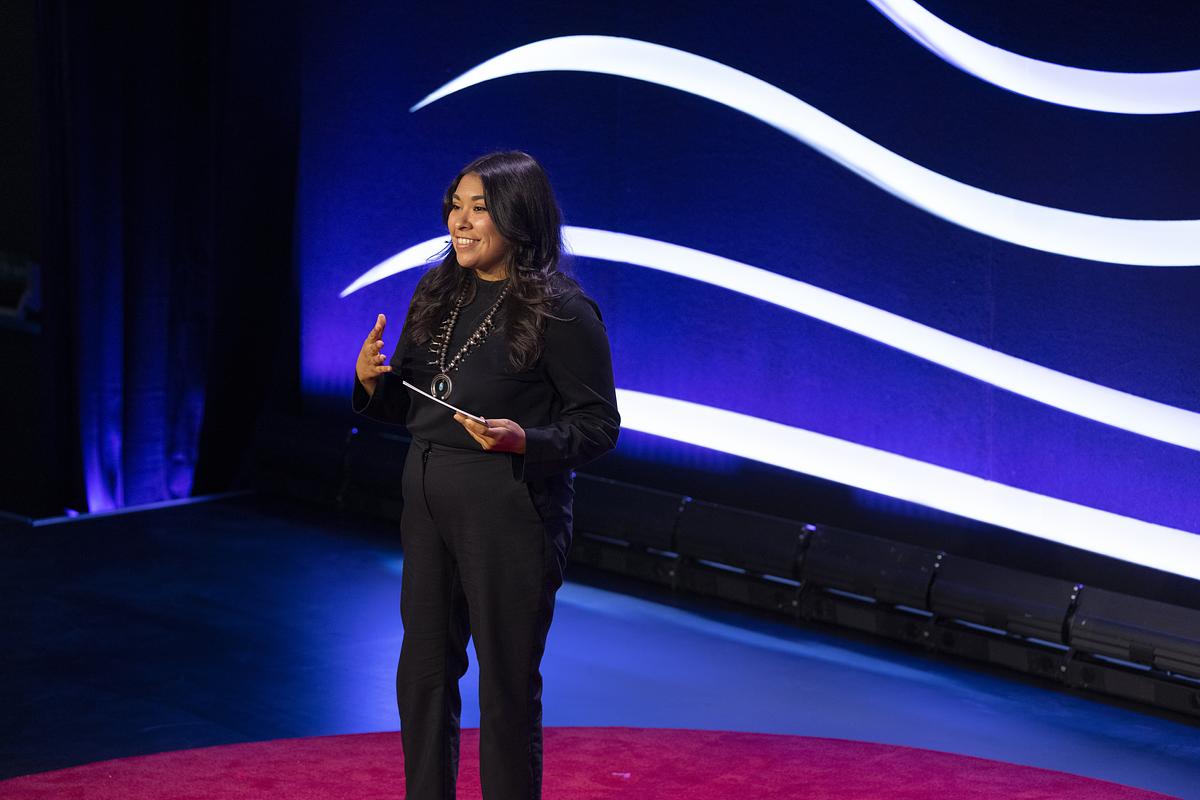 Big idea: Our obsession with carbon footprints isn’t getting us any closer to net zero emissions. Climate work should focus on people and communities, not carbon.

Why? Jade Begay works with the people affected “first and worst” by the climate crisis: Indigenous communities from the Arctic to the Amazon. And these communities tell her that the carbon markets aren’t working to reduce the devastating impacts of climate change. Begay wants to better align the climate solutions designed in corporate buildings and government halls with the needs of those on the frontlines. She offers two starting points. First, we must understand how climate change impacts Indigenous peoples’ lives and identities and conduct surveys to fill in gaps in our understanding. Second, we should allow Indigenous expertise to guide our climate actions in a way that builds trust and centers native voices without co-opting their knowledge.

Big idea: If we want to understand the environment, we should be looking deeper underground.

How? Most trees have a symbiotic partnership with what’s known as mycorrhizal fungi — microscopic networks that help plants access soil resources with their roots. If we knew which of these fungi were most beneficial to forest health, explains Colin Averill, we could reintroduce the necessary microorganisms into forest soil, enhancing tree growth and helping fight climate change. Averill has been studying soil microorganisms for years, using DNA sequencing to understand what lives in the soil of various forests and how that life relates to forest health, particularly tree growth rate and carbon capture. After identifying which fungi are most likely to enhance these metrics, his team started a randomized controlled field trial in Wales, with 27 acres of newly planted trees. Since planting in spring 2021, they’ve found that adding a small handful of soil that’s rich with high-performing fungal communities upon seeding has helped to accelerate tree growth and carbon capture aboveground by 30 to 70 percent, depending on the tree species. These results are early, but the data suggests that there’s potential to increase yields and carbon capture in managed timber forestry systems, as well as food agriculture systems. By rewilding the soil with its natural fungal biodiversity, we could improve our management of the land and, in the process, help fight climate change.

Big idea: By ending our dependence on traditional (and destructive) farming practices, we can solve two of our great existential problems: mass extinction and the risk of global food collapse.

How? Can we find a way to feed ourselves that won’t destroy the planet? Environmental writer George Monbiot says we can, but we’ll have to radically reimagine food production. Currently, crops and pasture for farmed animals occupy 38 percent of the planet’s land — in contrast, all of our homes, businesses and infrastructure occupy just one percent. This makes farming the single greatest cause of habitat destruction, wildlife loss and extinction. Our global food system isn’t just bad for the planet, Monbiot says — it’s also vulnerable to collapse. Four corporations control 90 percent of the global grain trade, by one estimate, and much food trade passes through vulnerable chokepoints like the Suez and Panama Canals. The good news is there are solutions: developing technologies that can improve our food system’s resilience and reduce environmental impact. One of the most promising, according to Monbiot, is a technique called precision fermentation: a refined form of brewing that can produce protein-rich foods using a tiny fraction of the land, water and fertilizer required to raise either crops or animals. 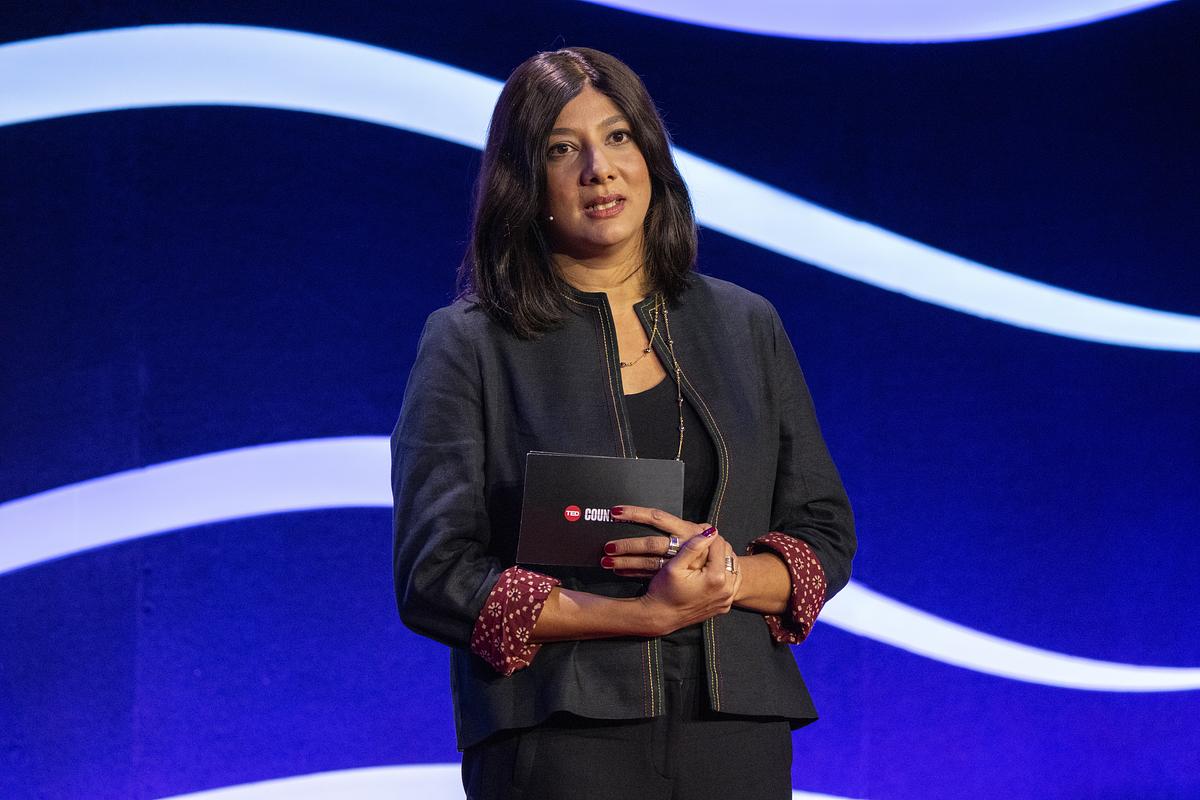 Big idea: Pakistan is drowning in the wake of catastrophic, biblical flooding. We need a new era of climate diplomacy and a new recognition that we, as a global society, are in this together.

How? One-third of Huma Yusuf’s native Pakistan is currently underwater due to climate injustice: an exceptional monsoon coupled with flash-flooding due to the accelerated melting of Himalayan glaciers has led to vast devastation. To put it in perspective, the area that’s now underwater is larger than the entirety of Britain. Three million people have been stripped of homes and livelihoods. Hundreds have died, and survivors are dying from disease. What does the future hold? Food insecurity, famine, climate migration and conflict, says Yusuf. Pakistan needs billions in relief funds, and G20 countries (responsible for 80 percent of global greenhouse emissions, compared to Pakistan’s less-than-one-percent contribution) that have profited from fossil fuel development should be the ones to foot the bill when climate disaster strikes climate-vulnerable countries. “Let’s be clear: developing countries are not asking for charity,” says Yusuf. “Having polluted only marginally, they are climate creditors, and that credit is now due.” To move in the direction of justice, an expanded definition of reparations is the only logical, albeit politically complicated, way forward. But in order to truly make headway, the global south must acknowledge its own shortcomings and struggles with poor governance, inadequate planning, corruption and lack of infrastructure and accountability. Together is the only way to make progress, and it will take countries rising to the occasion to achieve true climate justice. ”Are we ready for a new social contract within countries and between countries?” Yusuf asks.

Big idea: Confronting climate change is about creating better cities for everyone.

How? Picture a construction site, except without the noise pollution because the machinery and the trucks are all electric. That’s what a climate-conscious worksite sounds like in Oslo, Norway. With the goal of removing 95 percent of carbon emissions by 2030, Heidi Sørensen is spearheading Oslo’s green future, making sure the necessary infrastructure and policies are in place. From a carbon-capturing facility set to launch in 2026 to electric transport, Sørensen details the measures taken so far and shares five lessons to becoming an emissions-free city. First, climate measures upgrade quality of life for everyone. Second, set ambitious goals. Third, keep all stakeholders accountable. Fourth, never underestimate what you can change as a demanding customer — the market is adaptable. And last, incentivize green mobility. Sørensen invites all cities to join Oslo in creating a future of cleaner, better cities. 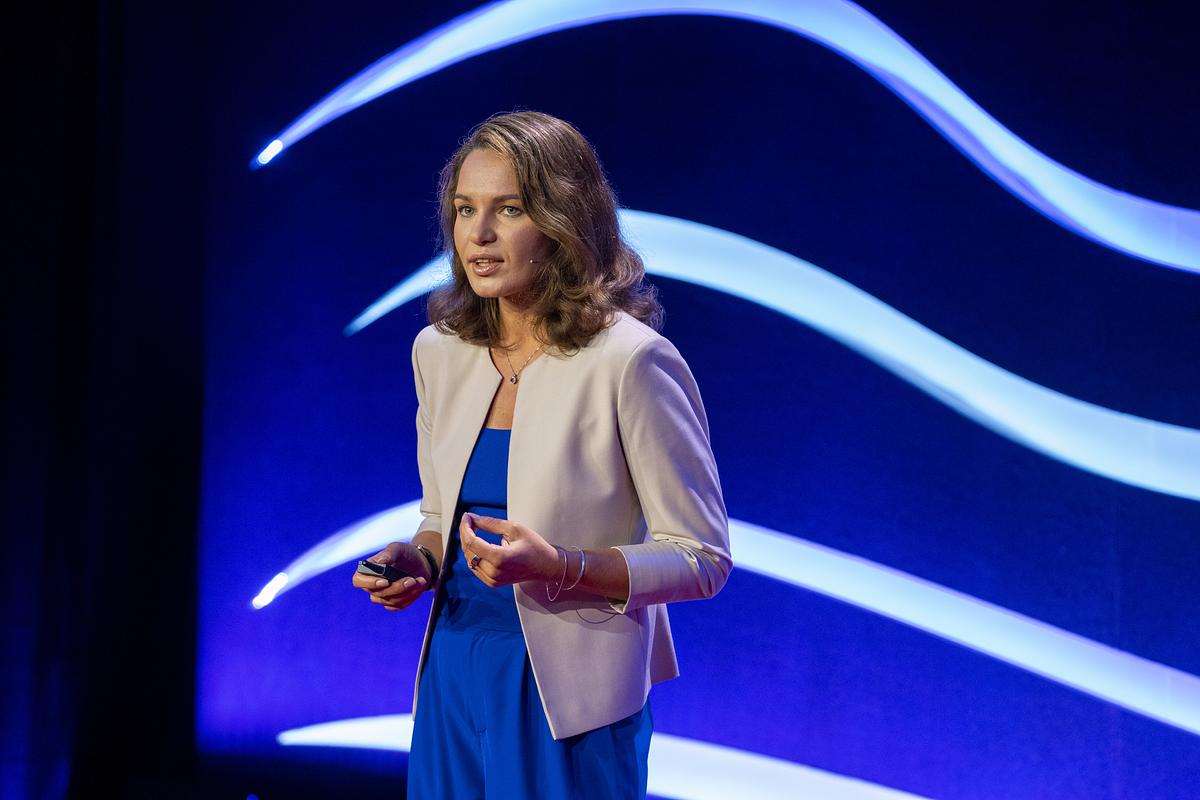 Big idea: Buildings are responsible for more than one-third of global carbon dioxide emissions, but we can transform how buildings consume energy to reduce their high environmental impact.

How? Ksenia Petrichenko has a three-tiered strategy for reducing direct emissions from the buildings where we live and work. First, she says we need to improve our buildings’ energy efficiency through better insulation, more efficient windows and appliances that require less energy for heating, cooling, cooking and lighting. Second, we need a massive shift towards electricity. And, third, of course that electricity needs to be clean, powered by wind, solar and other low-carbon energy sources. Petrichenko envisions a future where energy resources aren’t concentrated around a single power plant, and where buildings have roof-top solar panels or wind turbines that help produce some of the energy they consume. We have the technology to create smarter grids, implement peer-to-peer electricity sharing and start improving buildings’ efficiency, she says. Next up? “We need the policies, the investments, the will and a new way to look at buildings not as passive energy users but as active players in the energy system,” she says.

Big idea: The carbon removal industry is still in its infancy, but think of early smartphones — technology that started out clunky, inefficient and expensive ultimately became sleek, affordable and ubiquitous, changing everything. Jan Wurzbacher thinks nascent carbon capture technologies could be on that same trajectory.

How? While it still needs to scale by many orders of magnitude in order to make a significant impact, carbon capture plants like Orca in Iceland, built by Jan Wurzbacher’s company Climeworks, will become a crucial part of our carbon reduction toolkit. The technology is relatively easy to understand — suck in a bunch of air, filter the carbon out, store it (for now, mostly in rocks underground) and then put the carbon-free air back into the atmosphere. This is expensive, and there are other obstacles to scaling and implementation. CO2 is present in low concentration in the air — one CO2 molecule out of every 2,500 in the atmosphere. And materials used to absorb carbon are also tough to find, and they need to last a long time. Nature offers us some solutions — forests and oceans — but it needs help, and there isn’t enough area to plant entire continents of forests. Carbon removal technology is a “must-have” tool to scrub carbon from our atmosphere. 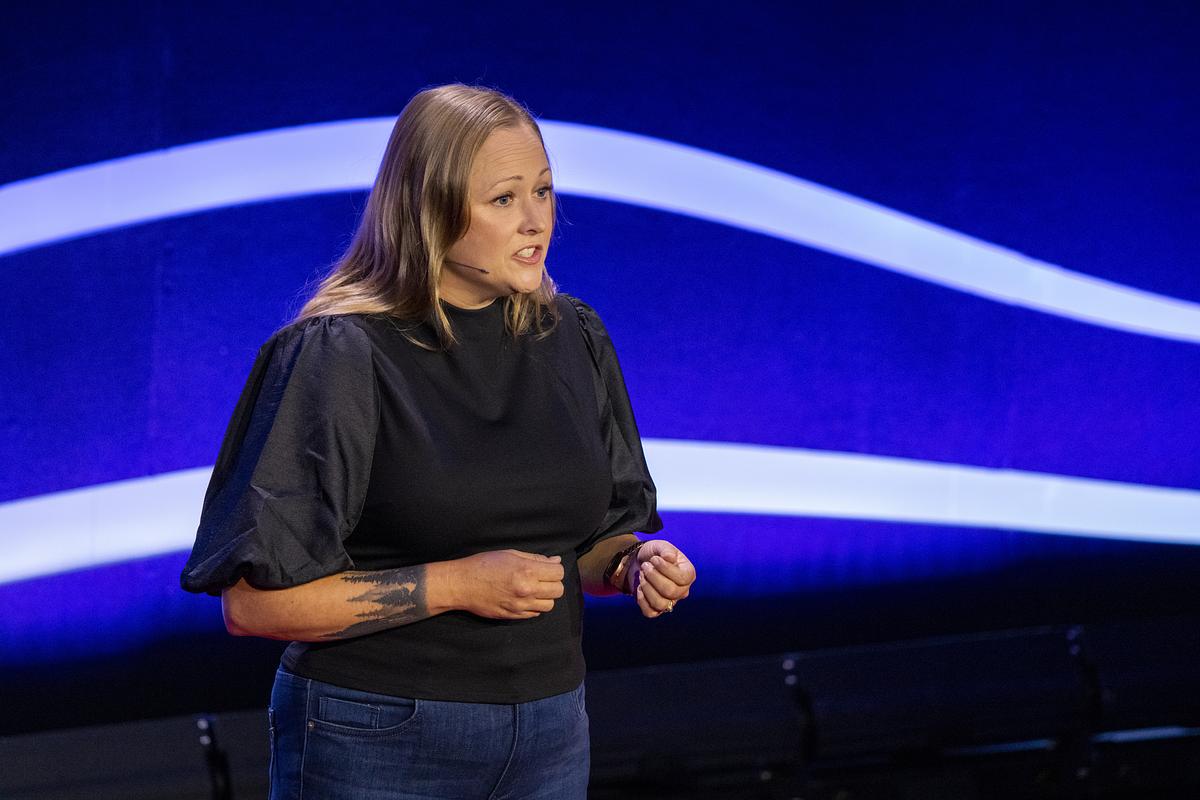 How? How much money does removing carbon from the atmosphere actually cost, and how do we create a profitable carbon removal market? As the lead for sustainability at Shopify, Stacy Kauk wanted to not simply pay “carbon credits” that force someone to pollute less to mitigate the mess someone else already created. In addition to cutting emissions, we must also take carbon out of the atmosphere. But creating a global carbon removal industry is incredibly expensive. Borrowing an idea created by the vaccine industry, Shopify (in partnership with Meta, Alphabet, Stripe and McKinsey) have created Frontier — a $925 million Advanced Market Commitment (AMC) to grow future carbon markets through purchase guarantees. This approach faces obstacles: clean power currently doesn’t exist at the scale to accompany carbon removal; there hasn’t been much deployment at this stage of carbon removal technology; and existing manufacturing facilities for the technology can’t keep pace with the scale the market requires. Nonetheless, Frontier is an important first step to making carbon removal a future multi-billion-dollar industry.