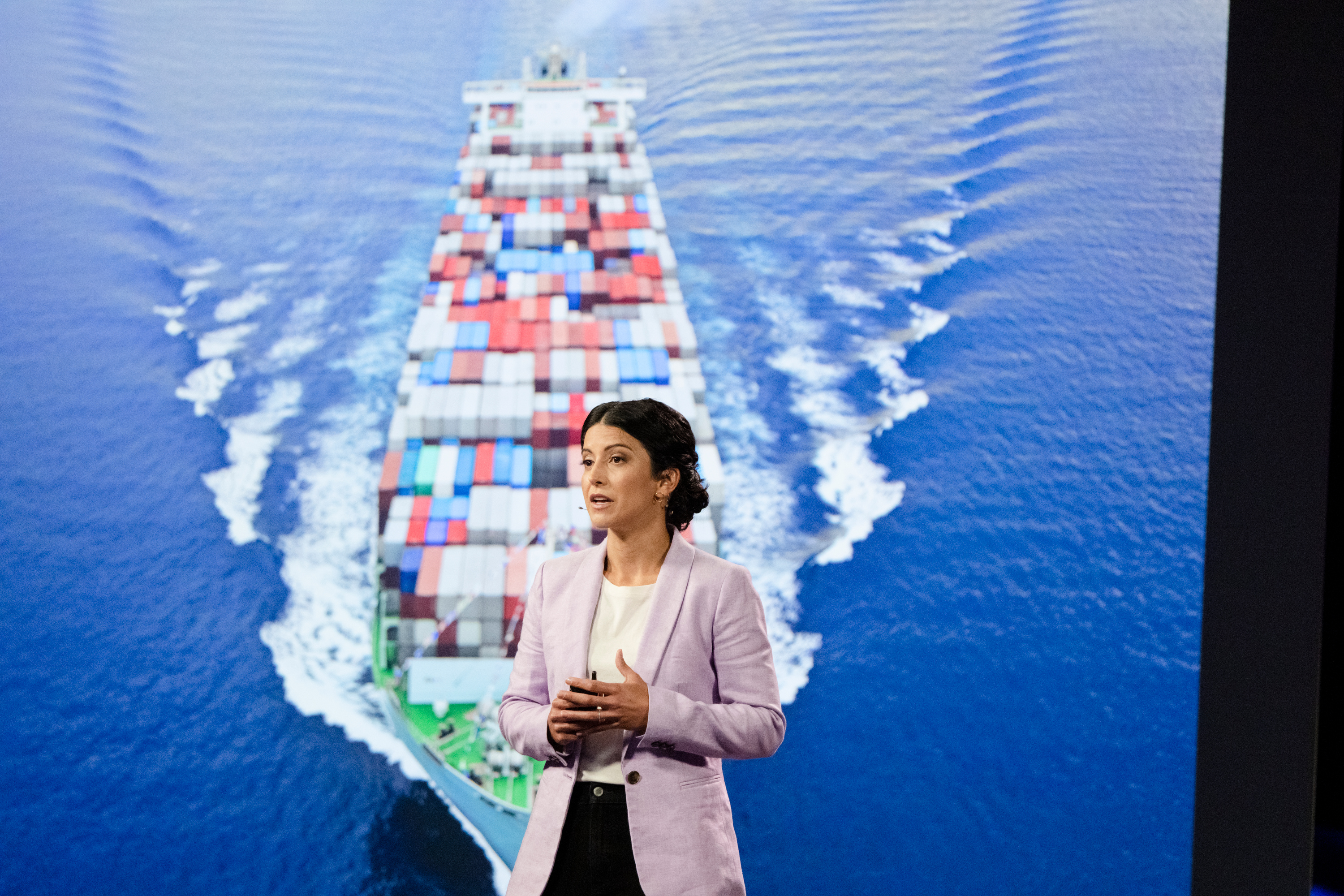 Maria Gallucci comes ferrying good news: there’s a way to clean up the shipping industry that’s green, economically lean and can be made with planet-friendly machines. She speaks at TEDMonterey: The Case for Optimism on August 2, 2021. (Photo: Bret Hartman / TED)

The scale of the climate crisis is so daunting that it can be easy to get dragged down into pessimism. But at Session 4, six speakers — call them unexpected heroes of the future — told a different story of how we might beat this thing. They speak on an exciting range of phenomena and possibilities that could make a huge difference in our effort to draw down gigatons of CO2 and regain a livable environment.

Special guest: Nigel Topping, the UK’s High-Level Climate Action Champion for COP26, chats with Chris Anderson about the prospects of increased climate ambition ahead of the UN climate conference this November and gives an update on Race to Zero, a global campaign to mobilize leadership on this crucial issue. 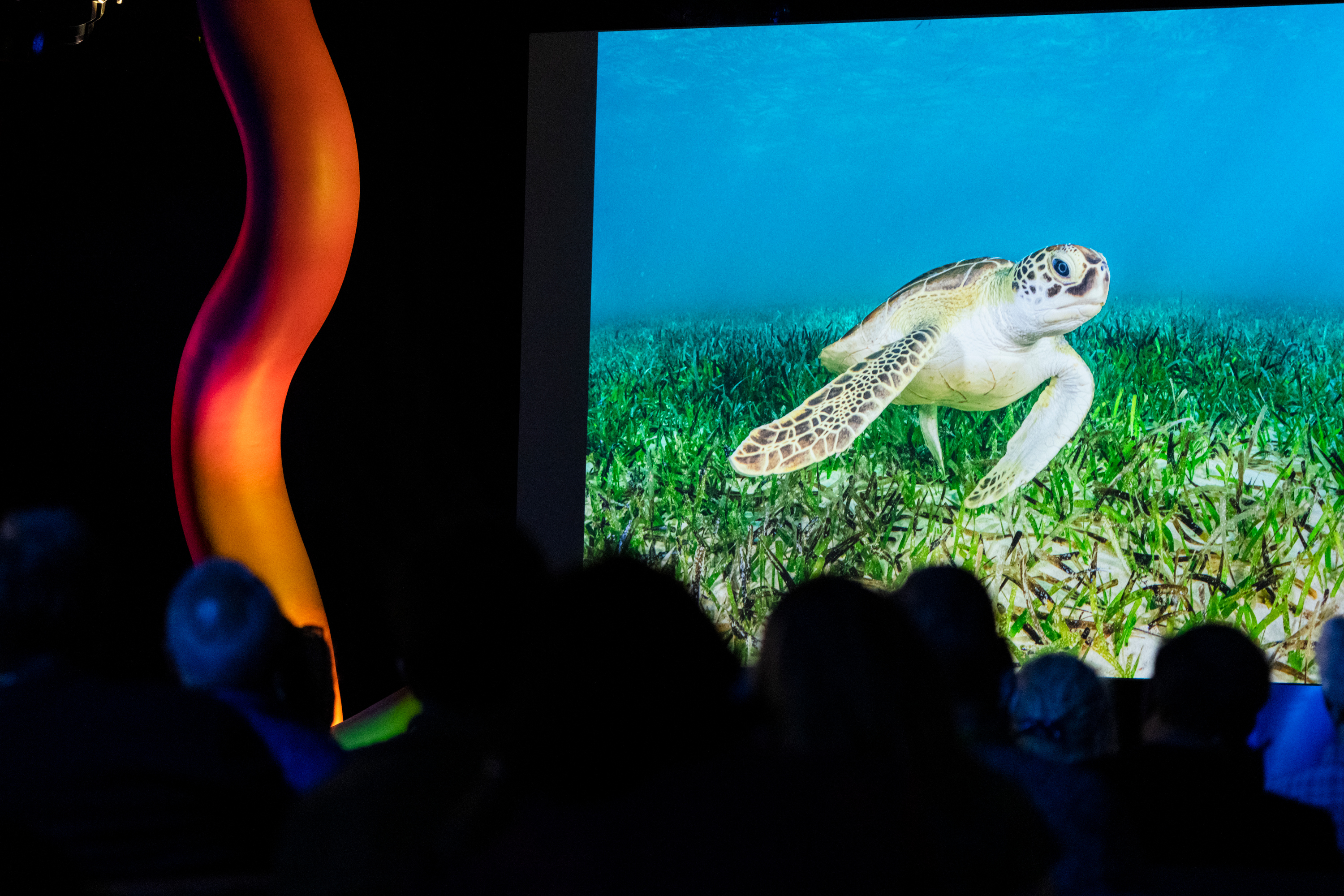 Seagrass is an unsung hero in the fight against climate change, says Carlos M. Duarte. He talks about his work mapping seagrass locations across the world’s oceans with the help of turtles and tiger sharks at TEDMonterey: The Case for Optimism on August 2, 2021(Photo: Bret Hartman / TED)

Big idea: Seagrass is an unsung hero in the fight against climate change. But disease, dredging and the deterioration of our oceans’ water quality threaten to wipe out this vital species — unless we take immediate action to protect it.

How? You’ve likely seen seagrass — it grows along the shore of every continent except Antarctica — but did you recognize this humble plant as a champion of carbon sequestration? According to Carlos M. Duarte, seagrass is responsible for drawing down one-third of the carbon that accumulates in the seafloor each year! Seagrass also filters plastic from our oceans and, during hurricanes and tropical storms, its massive roots and rhizomes reinforce the seafloor and act as the first line of defense for our coastlines. The bad news: a disease in the Atlantic killed off vast colonies of seagrass in the 1930s and, since then, water pollution, dredging, trawling and anchor damages have worsened this plant’s plight. But Duarte and the team at Beneath the Waves are working to save our seagrass. They are mapping seagrass locations across the world’s oceans (using turtles and tiger sharks!), promoting policies to improve water quality, restoring damaged seagrass meadows and planting new ones. With enough action, Duarte believes we can protect plant heroes like seagrass and rebuild marine life by 2050.

Big idea: The maritime shipping industry must become climate-friendly — but have no fear, green ammonia is here.

How? Every day, tens of thousands of cargo ships criss-cross the ocean carrying the food we eat, the clothes we wear and the cars we drive. At the same time, they spew fumes and black smoke from heavily polluting fossil fuels into the atmosphere. But Maria Galluci comes ferrying good news: there’s a way to clean up the industry, beyond reverting to pre-industrial sailing ships, that’s green, economically lean and can be made with planet-friendly machines. Green ammonia could be a game-changing way to turn the tides for the shipping industry, as it’s not carbon-based; rather, it’s made up of nitrogen and hydrogen (the molecules that make up air and water). Galluci lays out how this alternative fuel could become an industry-standard reality — from environment-friendly manufacturing processes combined with plunging renewable energy costs to combustion engines and fuel cells. So, what will it take to get an ammonia-powered shipping industry mainstream? She says a rough parallel can be found in the rise of electric cars. Hopefully, one day soon, the incoming freighters will not bring the smell of diesel and carbon emissions, but the scent of a fresh sea breeze.

Big idea: We can use drone technology and ecology-trained AI to restore degraded land and revive complex, biodiverse ecosystems.

How? Land restoration is more than planting trees, says Susan Graham. If we want to revive the more than two billion hectares of degraded land on the planet, we need to embrace complex solutions. According to Graham, drones and AI can help us restore areas damaged by industrial activities, natural disasters and invasive species by planting the right mix of native vegetation. In Australia, for instance, Graham and her team are helping restore the forest ina territory depleted and degraded by coal mining. Plus, this technology can work at enormous scales — meaning we can use it to revive the beauty and complexity of native ecosystems both in a single forest and across the planet. 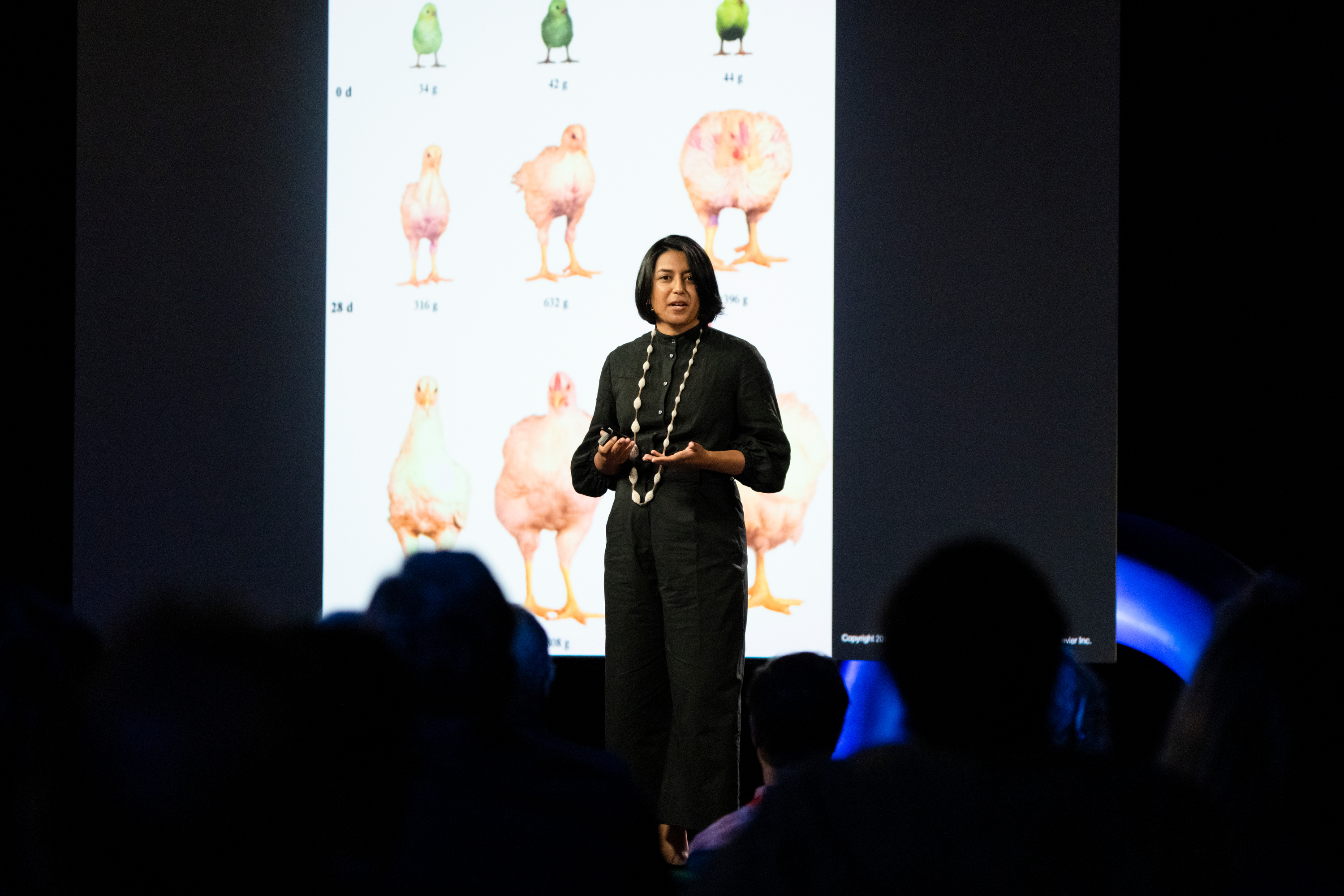 Is it possible to eat a hamburger without killing a cow? Isha Datar explores the exhilarating future of cellular agriculture at TEDMonterey: The Case for Optimism on August 2, 2021 (Photo: Bret Hartman / TED)

Big idea: Cellular agriculture makes it possible to eat meat without the negative consequences of industrial farming and processing.

How? What if you could eat chicken nuggets without ever killing a chicken? Or a hamburger without killing a cow? It’s possible through cellular agriculture, says Isha Datar, and this new means of meat production will transform our food systems. Here’s how it works: scientists take a biopsy from a living animal (like a chicken), extract the cells and then put them in a liquid medium that provides everything these cells need to grow. Instead of cramped cages stuffed with genetically modified hens, large bioreactors will produce boneless, skinless white meat without byproducts like feathers, beaks and bones. But this process isn’t just better for the birds; it’s better for all of us. Early estimates suggest cultured meat would require 99 percent less land, produce 78 percent fewer greenhouse gas emissions and use 82 percent less water than industrial meat farming and production. And meat is only the beginning! We could use this technology to grow vanilla without clear-cutting the rainforest or produce silk without silkworms. As Datar says, this isn’t a new product — this is our once-in-a-lifetime opportunity to get a second chance at agriculture.

Big idea: The actions governments take in 2021 to reduce emissions will determine if the world is on track to limit global warming to 1.5 degrees, so the time to act is now. Is there a way to hold them accountable for the goals set at the 2015 Paris Agreements?

An answer: In 2015, countries participating in the Paris Agreements agreed to cut greenhouse gas emissions in half by 2030 and bring carbon dioxide emissions to net zero by 2050. Climate Action Tracker is a platform designed not only to keep track of our progress towards reaching the Paris benchmarks, but also to pinpoint exactly who isn’t shouldering their fair share of the burden. The platform gives us a status update on what’s working, and what isn’t.

How? Transparency is the key to speeding environmental change at scale in China, says Ma Jun. He’s the creator of Blue Map, an app that tracks pollution violations and color codes factories based on their records of environmental contamination: green and blue are good; red and yellow are bad. This data makes it possible, at a glance, for citizens to monitor corporate violations and micro-report these offenses to government agencies. To help China achieve its goal of carbon neutrality by 2060, Ma and his team have also developed the Blue Map for Carbon Zero, which color codes cities and provinces based on carbon emissions. And he plans to expand the Blue Map project to include plastic, waste and even biodiversity to motivate more companies and more people to reduce their environmental impact and leave a healthier world for all of us. 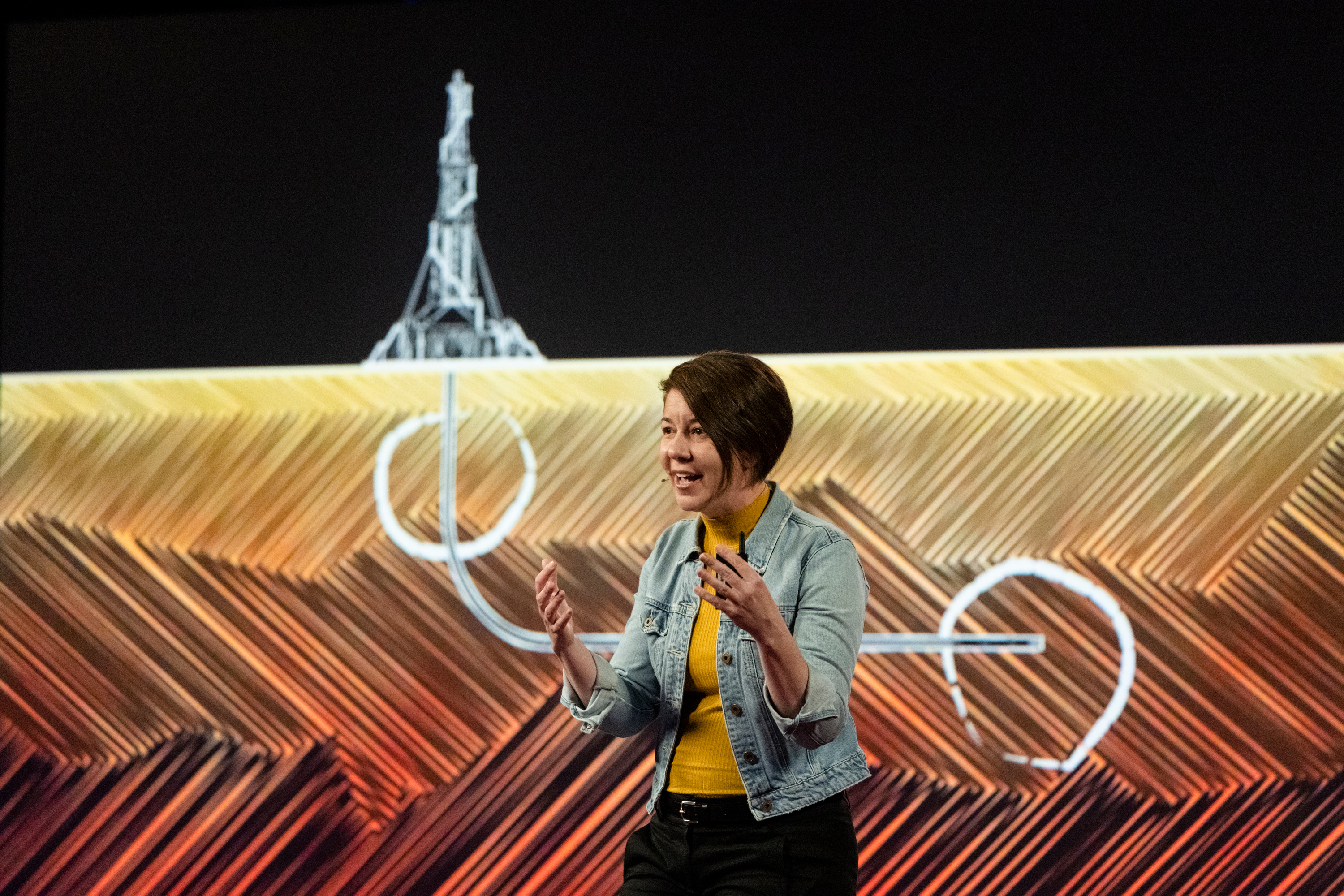 Jamie C. Beard explains how recent innovations in drill technology, such as the ability to drill in curves, have made geothermal energy enticingly feasible. She speaks at TEDMonterey: The Case for Optimism on August 2, 2021 (Photo: Bret Hartman / TED)

Big idea: Geothermal energy could provide us with a clean way to power the globe.

How? What if oil and gas companies could equip us with the infrastructure needed to clean our power grids? Jamie C. Beard advocates for geothermal energy, which requires drilling deep into the earth to access the planet’s natural heat, and explains how recent innovations in drill technology, such as the ability to drill in curves, have made this alternative energy feasible. But to bring geothermal energy to scale, we need to drill all over the world — and drill a lot. Fortunately, the oil and gas industry already has the technology, infrastructure and training to bring geothermal energy online fast. In fact, she says, many geothermal startups are founded by oil and gas veterans. The industry known for its dirty pollution could easily become a pioneer in curbing climate change. “We flip the switch, and we have green drilling,” she says. “This is simply a pivot — from hydrocarbons to heat.”