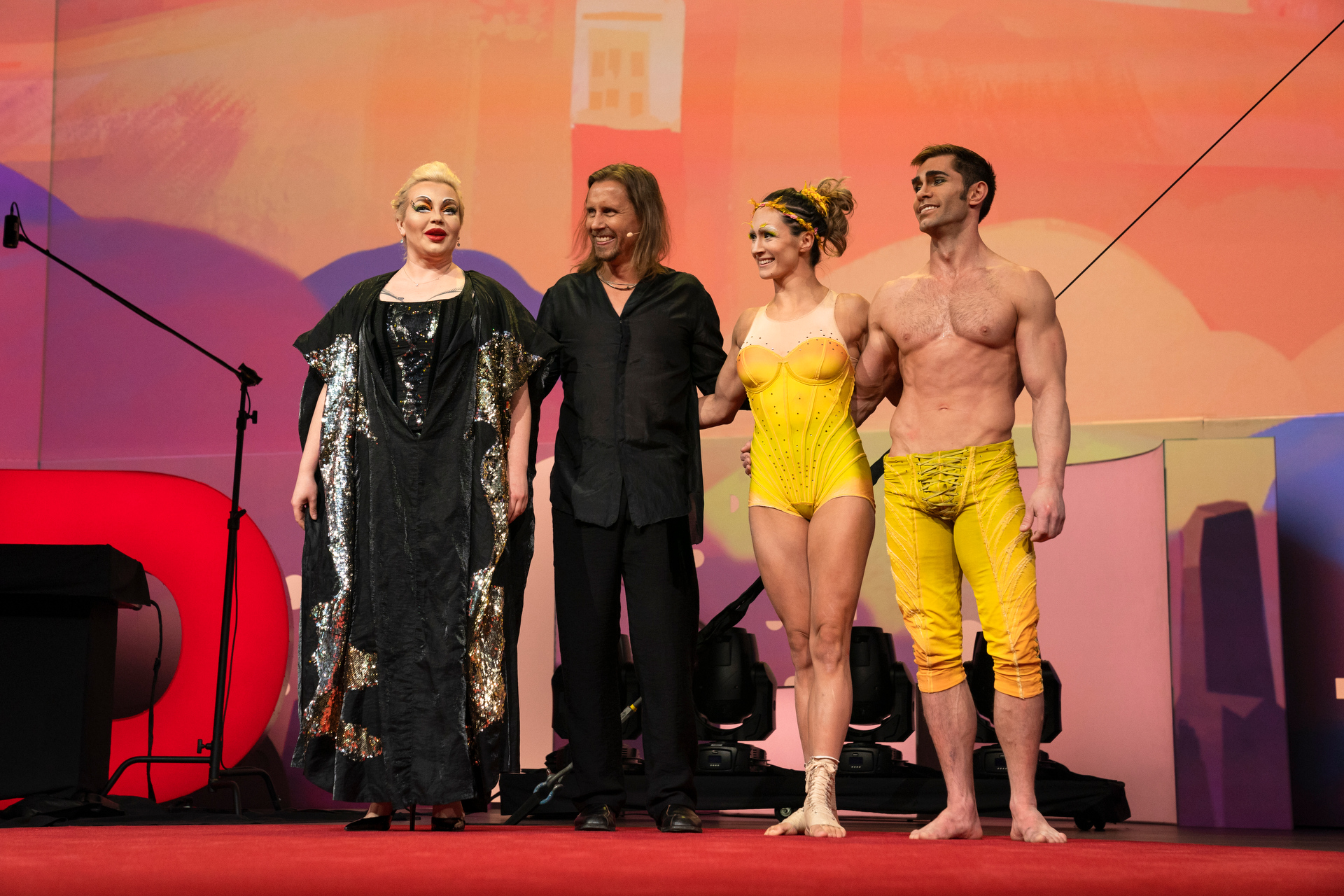 Neuroscientist Beau Lotto (second from left) stands with performers from Cirque du Soleil after they together created a shared experience of awe onstage at TED2019: Bigger Than Us, April 18, 2019, in Vancouver, BC, Canada. Photo: Bret Hartman / TED

“You have to start with an interesting question,” says neuroscientist Beau Lotto. We’re talking over Skype with collaborator Geneviève Laurendeau, the corporate PR manager at Cirque du Soleil, to discuss their year-long science project: an experiment to measure awe. When and how do we feel awe? And: Why does it matter?

One great place to find awe is a Cirque du Soleil live show. That’s why, a few months ago at one of the company’s long-running shows, O, in Las Vegas, you could find 20 members of the Lab of Misfits, Lotto’s creative neuroscience group, running an “experiential experiment.” With the help of a clown and a zebra from the Cirque cast, they asked audience members whether they’d volunteer to wear an EEG helmet while researchers watched their brain activity, then take some tests to measure what awe does to them.

As Laurendeau says: “O is an iconic show that generates strong audience reaction and emotional connection. We have audience members who are going back to this specific show every year over and over, and the feeling is the same.” O was a great platform for research, both for its stability (it has its own purpose-built theater, versus being in a traveling circus tent) and for its sheer astonishment factor: the show combines circus arts with dreamlike performances in and around 1.5 million gallons of water. As Lotto puts it, O creates an environment where people feel “brought elsewhere.”

Of working with Cirque, Lotto says, “It was a true co-creation and collaboration.” Which started, as many great things do, with a lot of meetings. “It took about one year to plan,” he says, to Laurendeau’s agreement. 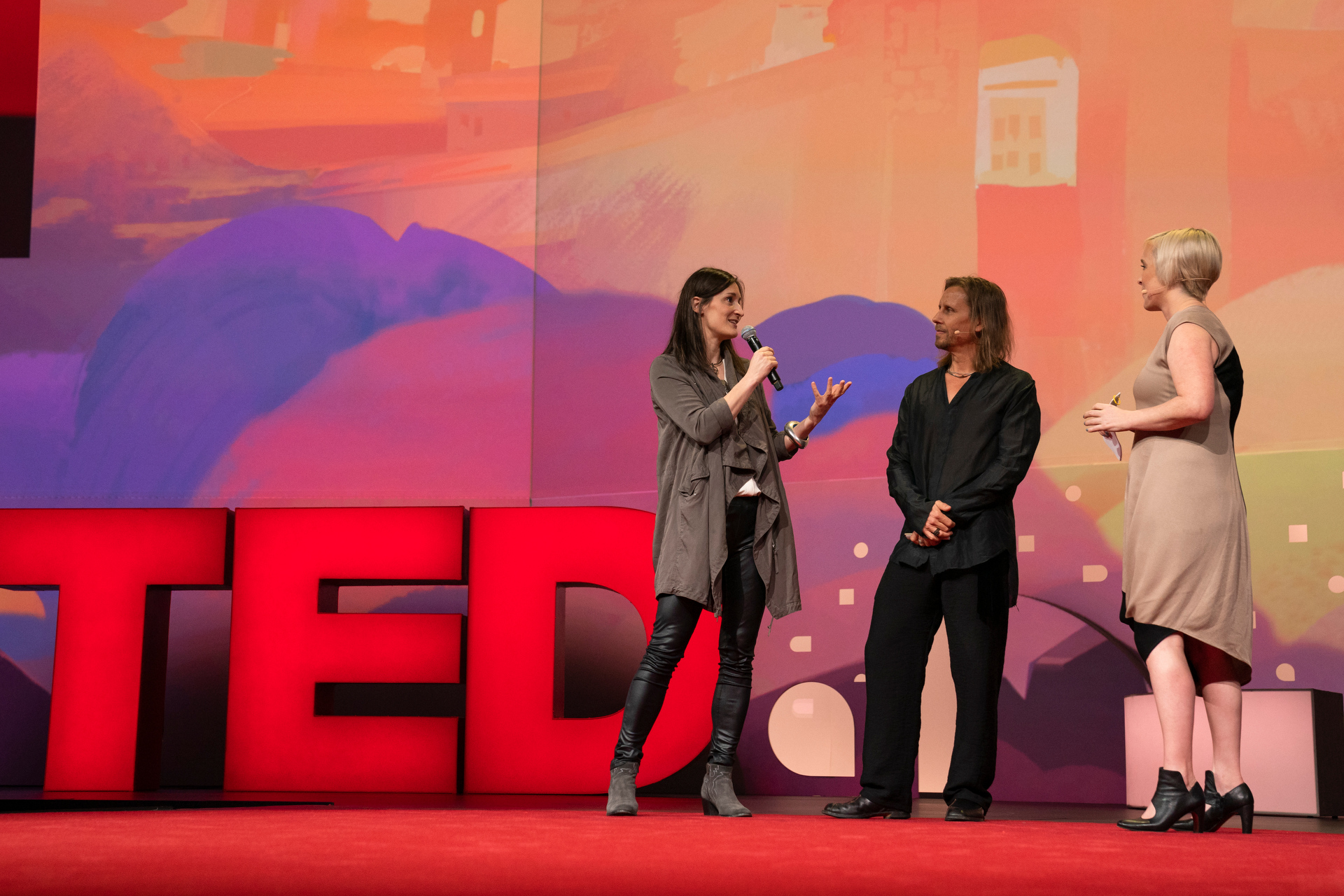 Geneviève Laurendeau, left, of the Cirque du Soleil takes a question from host Helen Walters, right, about Cirque’s collaboration with neuroscientist Beau Lotto and his Lab of Misfits, during TED2019: Bigger Than Us, April 18, 2019, Vancouver, BC, Canada. Photo: Bret Hartman / TED

Lotto says, “The experiments themselves ran over 10 shows, two shows a night. So we were in Vegas for roughly 10 days, but we were running experiments for about five, six days of that. And it was constant, completely continuous. And it’s super high-energy. Exhausting. But beautiful, beautiful. And we can’t complain; I mean, look at the performers, they’re doing two shows a night forever.”

As acrobats, dancers, clowns and swimmers performed during the 90-minute show, lab members monitored the data that streamed from the EEG helmets, and collected self-reported reactions before and after the show. They measured 23 specific “awe moments” identified in the show, from a collective 280 audience members, over the course of the experiment.

The team found some surprising results around a specific brain wave signature that’s associated with a feeling of awe — and their tests drew connections between awe and some core human feelings: a sense of connection, a desire to take risk, and our impressions of the future and the past. The results are shared in a white paper; Lotto is discussing his initial findings today, onstage at TED, with help from Cirque performers and other artists.

“A lot of what we discovered isn’t known yet,” Lotto says. “There is some research on wonder, but not much on awe. A great deal of it comes out of professor Dacher Keltner’s lab at Berkeley, where they’ve demonstrated an effect of pro-social behavior, which we can confirm, but no one has been able to get into the brain. People thought maybe awe is created by a social effect. And we’re saying, no, actually it’s something far deeper.“

Lotto surmises that awe evolved as a way to help humans try new things that scare them. “It’s maybe evolution’s solution that enabled us to go to the very place that we evolved to avoid, which is the north, is the unknown.”

The experiment has stimulated more questions at the Lab of Misfits, of course. “We want to explore the pro-social impact,” says Lotto, “how awe connects people, how it facilitates growth and expansion in others. It really gives you energy to continue.”

As Lotto says: “When you can truly unite science and art, you’ll see they’re the same thing.”