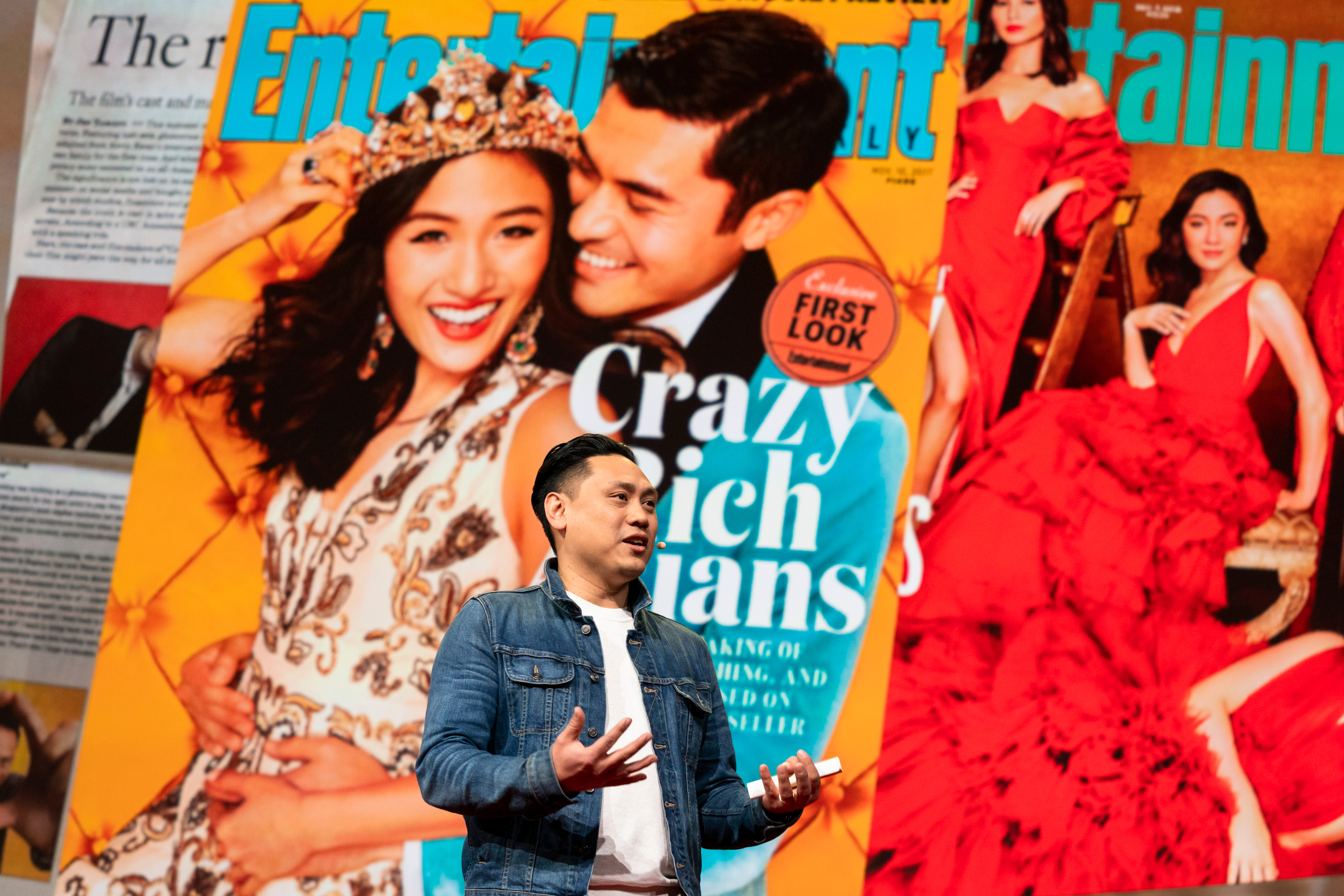 On the heels of the breakout success of his film Crazy Rich Asians, Jon M. Chu reflects on what drives him to create inspiration. He speaks at TED2019: Bigger Than Us, on April 18, 2019, at Vancouver, BC, Canada. (Photo: Bret Hartman / TED)

If you haven’t heard of the blockbuster megahit Crazy Rich Asians, then, well, it’s possible you’re living under a large rock. But whether or not you saw it, the film’s director, Jon M. Chu, has a TED Talk that goes far beyond the movie.

Speaking onstage at TED2019, Chu reflects on the importance of representation onscreen and the experiences that propelled him to create such a groundbreaking hit. Spoiler alert: it all comes down to human connection.

“My story is only possible because of a collection of connections that happened throughout my life,” Chu says. “And maybe through my little stories, others may find their path as well.”

As Chu starts off, it becomes clear that his connection to his family, his culture, to film and technology – each one of those ingredients – made him who he is today.

But first, back to the beginning: Chu grew up with immigrant parents, in a family that never felt “normal,” he says. Why not? Because his family didn’t look like the families they saw on TV and in movies. That was his “normal.”

The first shift in that narrative happened on a family vacation when Chu was young. His father put him in charge of the video recorder, so he tried his hand at stitching together a highlight reel of the vacation. He anxiously showed it to his family — and what happened next changed the trajectory of his life.

“Something extraordinary happened,” Chu says. “They cried and cried. Not because it was the most amazing home video edit ever, but because they saw our family as a normal family that fit in and belonged. Like from the movies they worshipped and the TV shows that they named us after.”

After that, Chu’s future crystallized in his own mind. He went to USC School of Cinematic Arts and built up a career in Hollywood, hitching a number of successful films under his belt. (Remember Believe, that uber-popular Justin Bieber doc from 2012? Or The LXD?)

And yet, despite his successes, Chu was at a creative loss a couple years ago. Spurred in part by the Twitter firestorm around the Academy Awards’ lack of diversity, Chu realized: he could be a part of the solution. He was already inside the Hollywood circle, after all, with power that few possessed.

He wasn’t alone in his efforts, he says. A vibrant community on social media backed him every step of the way, ultimately driving him toward Kevin Kwan’s bestselling novel Crazy Rich Asians — and the breakthrough film we know today.

Lest we forget: there was no guarantee Chu’s movie would do well. In fact, many signs pointed toward failure. But, with the help of “a grassroots uprising” of Chu fans online, he says, Asian representation in the arts started to hit headlines. “This swell of support allowed a conversation to be had between us — Asian Americans defining how we saw the future of our own representation,” Chu says.

And then the movie was out in theaters, and it exploded. Chu was overwhelmed with pride — a familiar sensation from all those years ago when he sat surrounded by his family, the sounds of his vacation highlight reel washing over them. Seeing people in the theater enjoying his film – well, that was “the ultimate prize,” he says.

The takeaway? It all circles back to connection, to those that offered breadcrumbs of connection along the way: kindness, love, and generosity. Closing out his talk, he makes an offering to us all: a breadcrumb of connection, of inspiration.

“I realized once you start listening to those silent beats in the messy noise all around you … you realize there is a beautiful symphony already written for you and it can give you a direct line to your destiny – to your superpowers.”