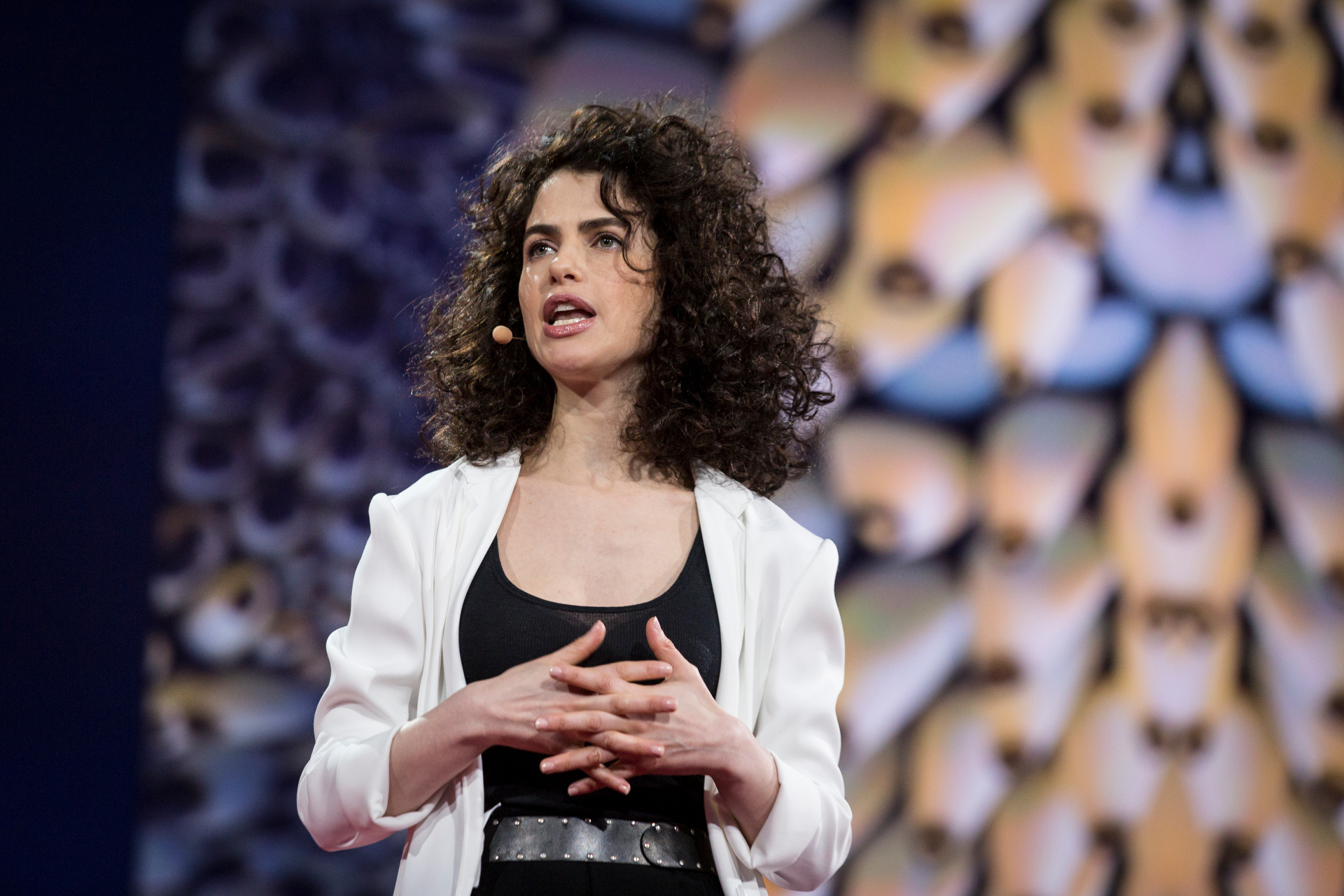 In a session that honors the “deeply practical and the entirely improbable,” pyromantics and biosynthetic designers meet artists and flag-worshippers. Helen Walters, host of Session 10: Creative Ignition, calls this session a “celebration of the catalytic thinking that reshapes the world around us.” Here’s a recap:

How to reboot society. Lewis Dartnell asks us to imagine an apocalypse. Not because it’s fun, but because “it’s a great thought experiment.” What would we need to know to rebuild? For food, we could scavenge—which would keep us alive for about 55 years. But beyond that, we need to glean nutrients, which involves building millstones and using fire. Fire, in a tin-can “gasifier stove,” could provide heat, help us cook, and even keep our machines going. From there, it’s possible to make glass, which Dartnell says is key to understanding the world and increasing human knowledge. “It is science that built our modern life, and it is science you would need to build from scratch,” he says.

A scourge of bad flags. “Once you understand the design of flags, you can understand the design of almost anything.” Roman Mars is the host of 99% Invisible, a podcast about design and architecture. He takes the stage (and a seat) to break down one of his shows examining vexillology, or the study of flags. Because as he says, “Few things give me joy like a well-designed flag.” Mars reveals five basic principles of flag design: 1. Keep it simple 2. Use meaningful symbolism 3. Use two or three basic colors 4. No letters or seals 5. Be distinctive. (Which is indeed a great guideline for any basic design at all!) He shows the beauty of the Chicago city flag and contrasts it with the chaos of Milwaukee, Wisconsin’s city flag, which is so ridiculous and convoluted that it has a flag within its flag. Jokes Mars’ guest from the radio show, Ted Kaye, “If you need to write the name of what you are representing on the flag, your symbolism has failed.” Mars believes deeply in the marriage between good design and civic pride — so why not care more about our city flags? 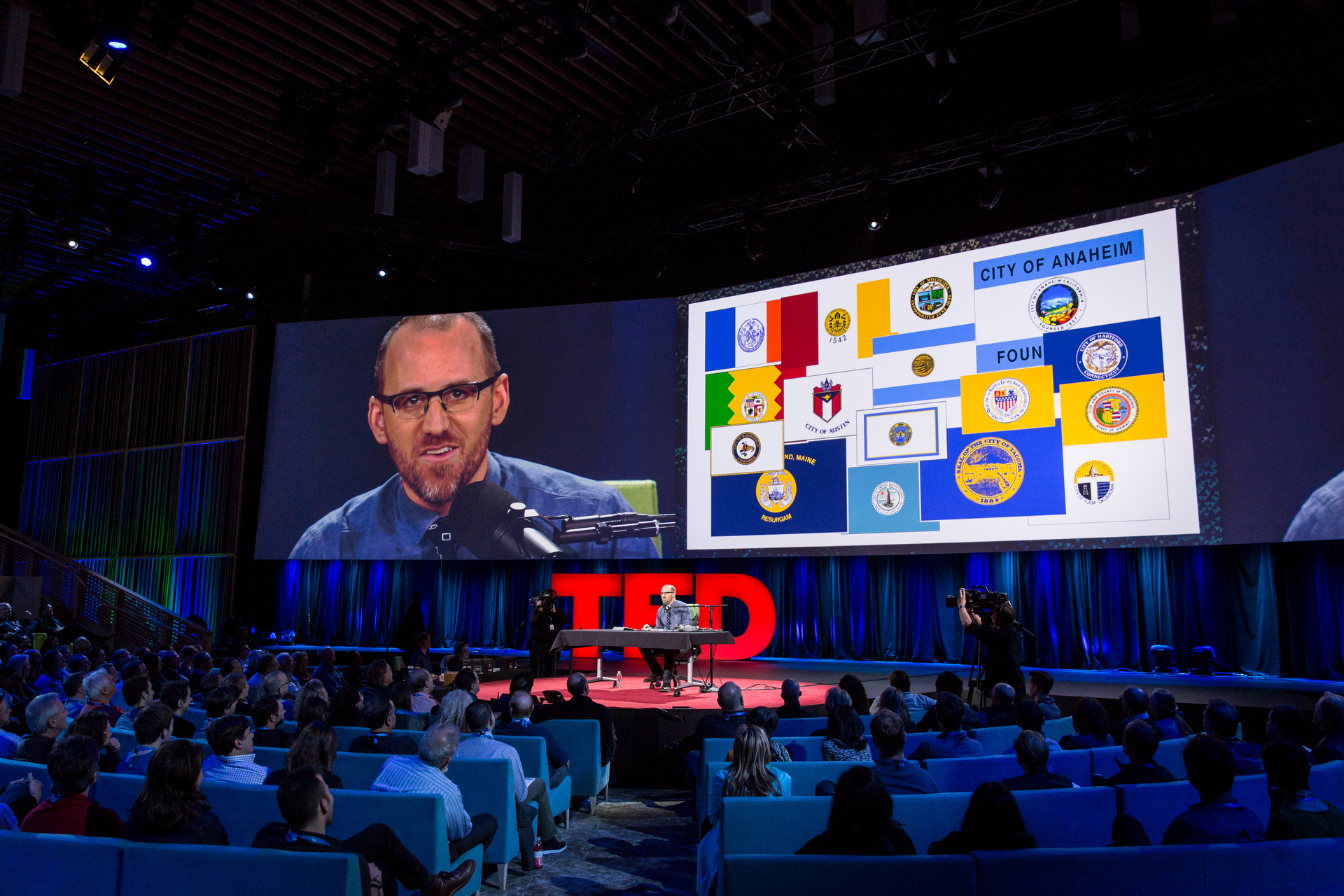 The words of TED. Dictionary evangelist Erin McKean is here to tell us the top 10 words of TED2015 so far. They are: neurodiversity, kinetic attack, court scraper, photoclinometry, placemaking, wide pin, vexillologist, umwelt, frass, upstander. To find out what these words mean, and how they popped up at TED, check the TED Blog tomorrow.

A flaming history. “We’re a uniquely fired creature on a uniquely fired planet,” says fire historian Stephen Pyne. Unlike other elements like water and earth, fire is not itself a substance – it’s a reaction. And this shapeshifting element has been integral to humanity’s survival, says Pyne. Our advantage over other animals is distinct: We have small guts and big brains because we could cook food; we went to the top of the food chain because we could cook our landscapes (in the form of trees); and finally we became a geological force because we could cook the planet — pulling coal, gas and oil from the very Earth. Says Pyne, “We hold fire power as species monopoly. That’s our unique ecological signature.” Moving through ages of biological, aboriginal, agricultural and industrial fire, Pyne shows us the power of the flame. 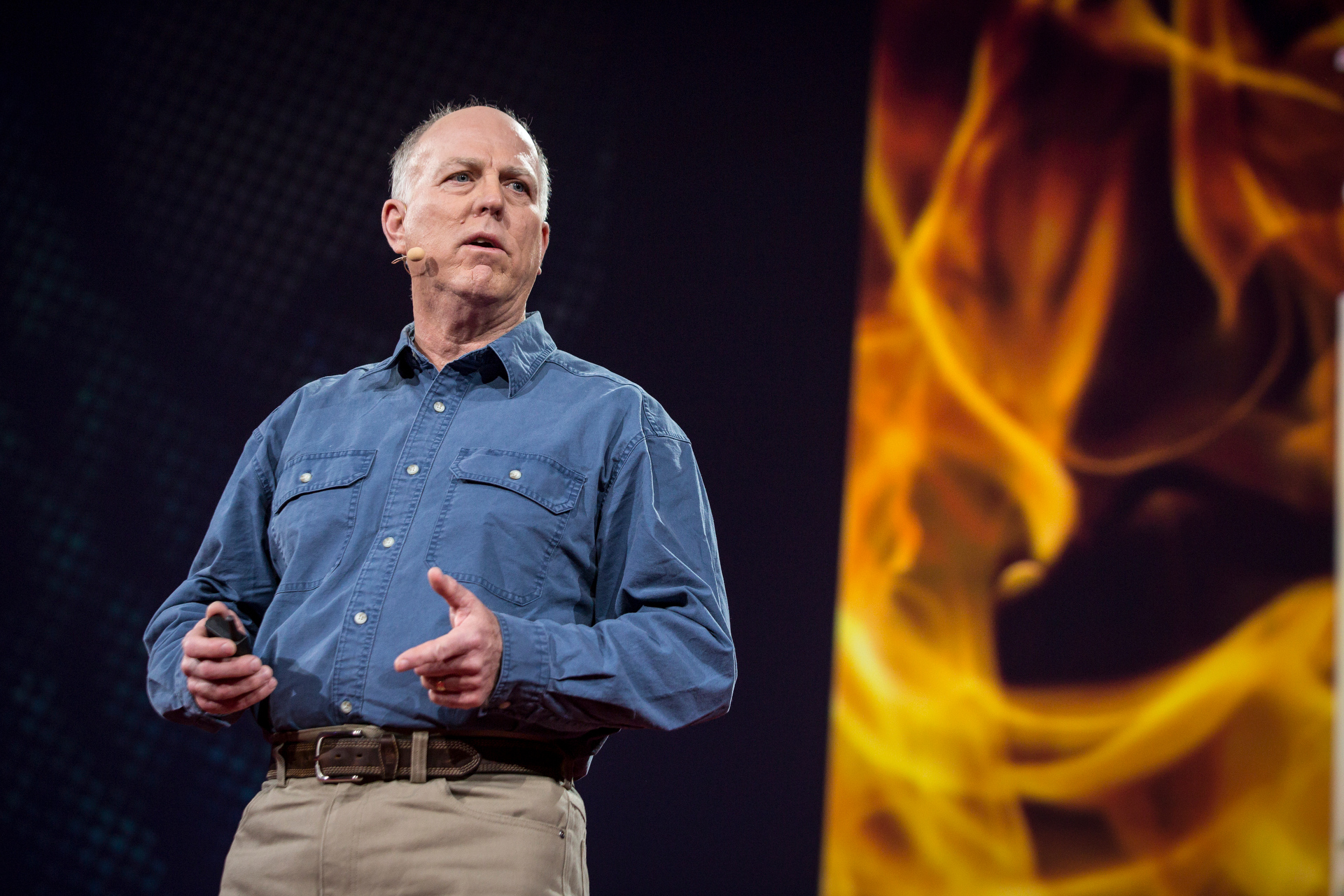 Internet of Moving Things. We have 1,440 minutes in a day. That’s all we get to work, live and play. In a brief yet engaging talk, Shiva Shivakumar, founder of Urban Engines, asked how we can get back some of our time, even as more and more of us crowd into fast-paced cities. By aggregating and analyzing cloud data from the Internet of Moving Things –any device, app, or software that tracks movement throughout space—he created interactive models that visualize patterns of movement through out cities. This provides useful information on everything from how bad traffic in São Paolo will be after a soccer game, to the best bus routes to take in San Francisco.

Photosynthetic wearables. Designer and architect Neri Oxman works at the intersection of assembly and growth. Using the “biblical material” chitin, as well as E. coli, silk, and other  natural materials, she and her team at MIT co-create new structures with nature. “We live in a special time in history — a rare time,” says Oxman. She notes that the confluence of four fields — computational design, additive manufacturing, materials engineering, and synthetic biology — is giving designers access to new tools and ways of being. For the first time, she reveals at TED a photosynthetic wearable grown from bacteria on the human body. “Think of it not as evolution by natural selection but evolution by natural design.”

The world from inside a box. “This is not about thinking outside of the box, it’s about thinking inside the box.” Artist Dustin Yellin zooms in on the colorful, incredibly detailed worlds that live inside the glass boxes he’s been making for the past ten years. The tiny landscapes are funny, dark, playful, provocative, and they capture the changing cultural DNA of our society’s fabric. From a Jesus with his locusts to an old lady playing guitar to some avocados, from a bird god tied up to a battleship to a collection of terrorist trading cards (you know, like baseball cards), Yellin’s boxes are macabre and stunning at the widest and smallest scales. And for the past several years Yellin has been working on a new kind of box – one made of brick instead of glass. At Pioneer Works in Brooklyn, he has built what he calls “a museum of process,” a new kind of multidisciplinary space where geneticists, physicist, sculptors, painters, programmers can all work together to create new forms. Says Yellin, this social sculpture is “not about seeing work finished, but rather work made.” 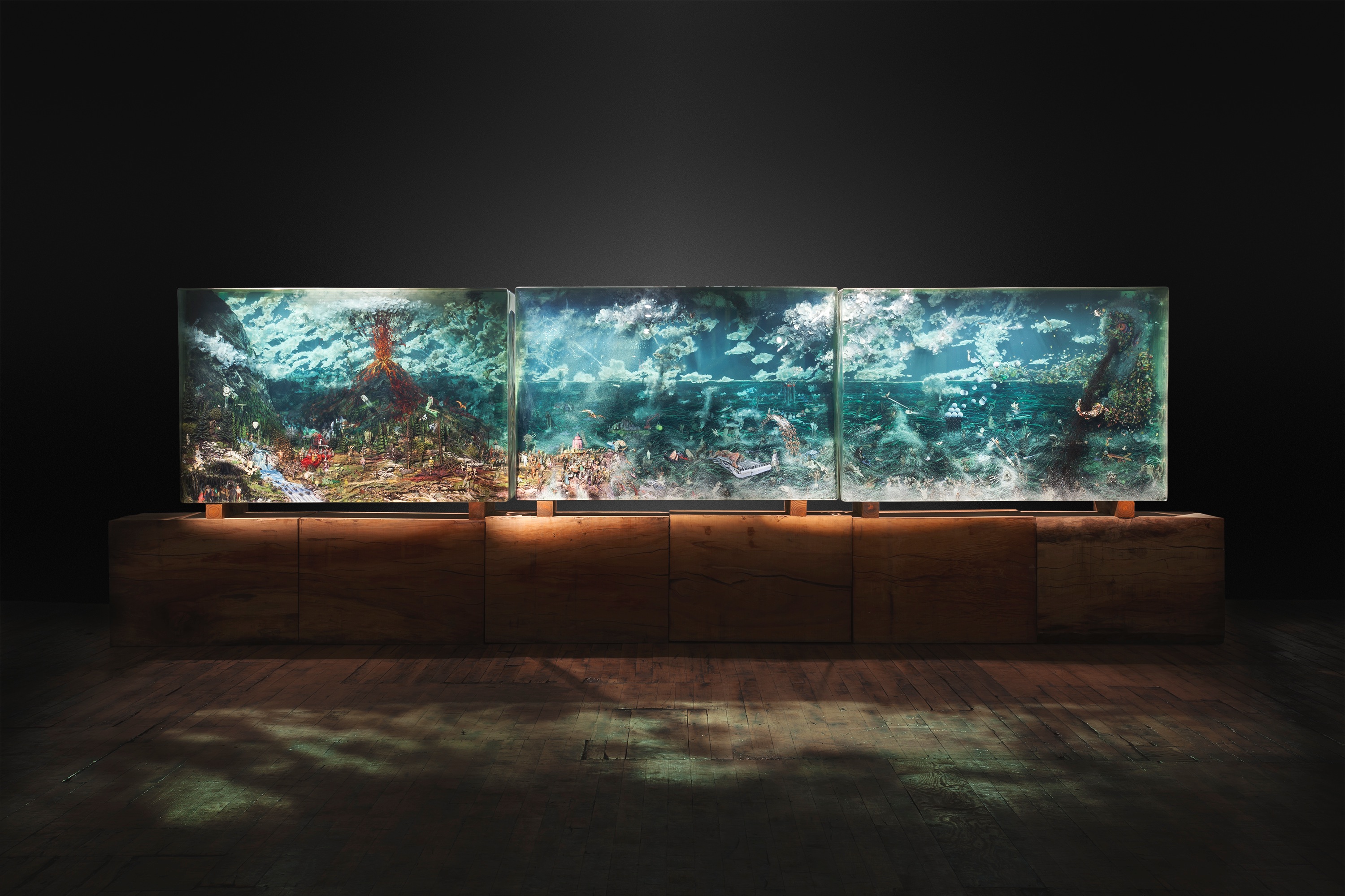