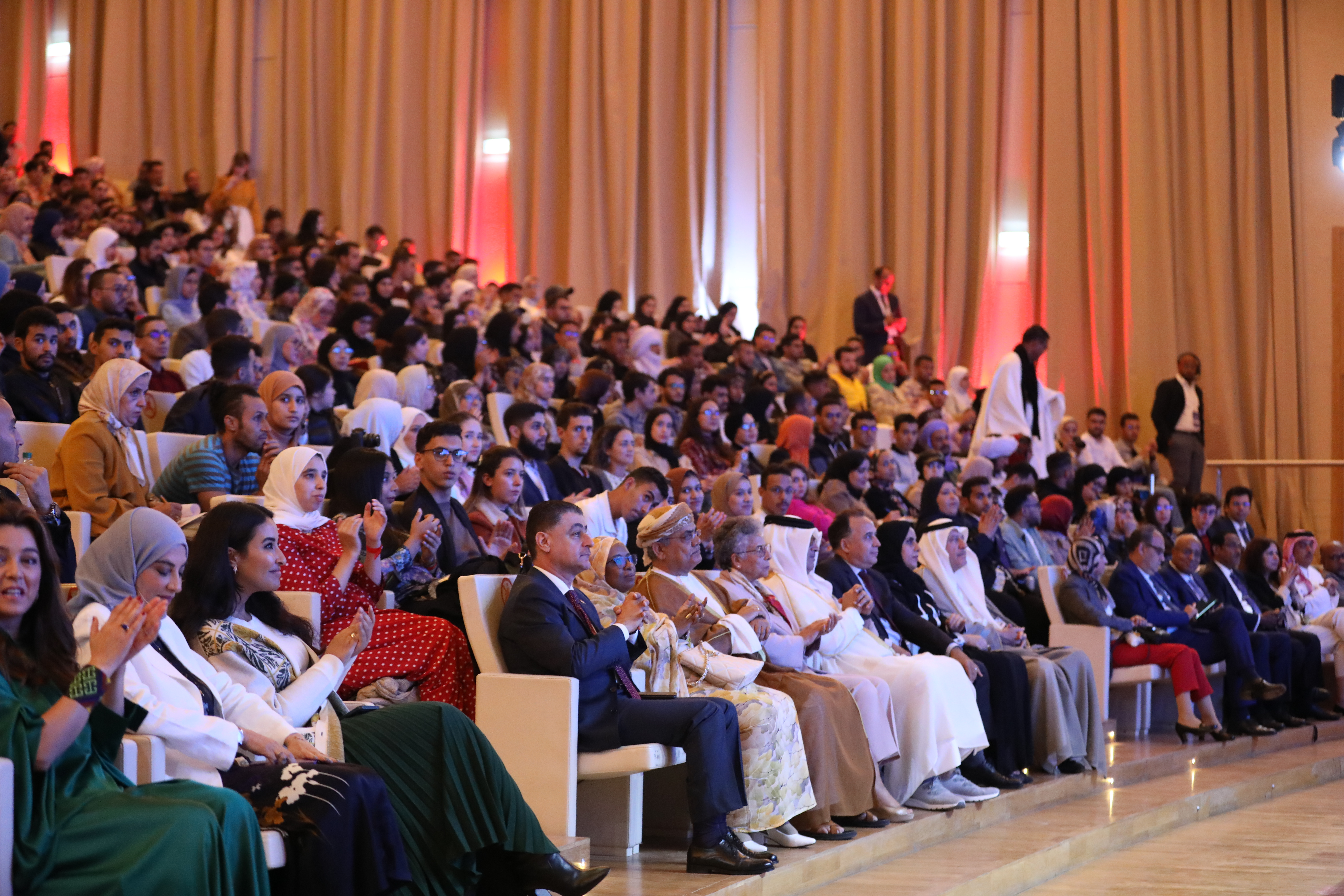 TEDinArabic brought together some of the world’s brightest minds to share ideas on the importance of outside-the-box thinking to change minds, embrace our shared humanity and shape the future.

The event: TEDinArabic, hosted by Al Jazeera correspondent Mohamed Errammach, included four talks centered on the theme “Dare to Discover,” a series of interactive workshops curated by partners at afikra, a performance by students of the Joudour Sahara music school and a series of interstitials by Arab artists. The event was attended by a number of dignitaries from Qatar, Morocco and Saudi Arabia, 50 students from across the region and more than 900 participants from Morocco. It was the third in a series of TEDinArabic regional events organized in the lead-up to the TEDinArabic Summit in March, 2023 in Doha, Qatar. The summit will feature 16 speakers from the Arabic-speaking world sharing their ideas for the first time with a global audience — all in Arabic.

When and where: Thursday, October 13, 2022 at the Mohammed VI Polytechnic University in Ben Guerir, Morocco

Opening remarks: Moza Al-Hajri, a student at Georgetown University in Qatar and a youth advocate for the Education Above All Foundation, emphasized the importance of the Arabic language to Arab identity and upholding cultural heritage. 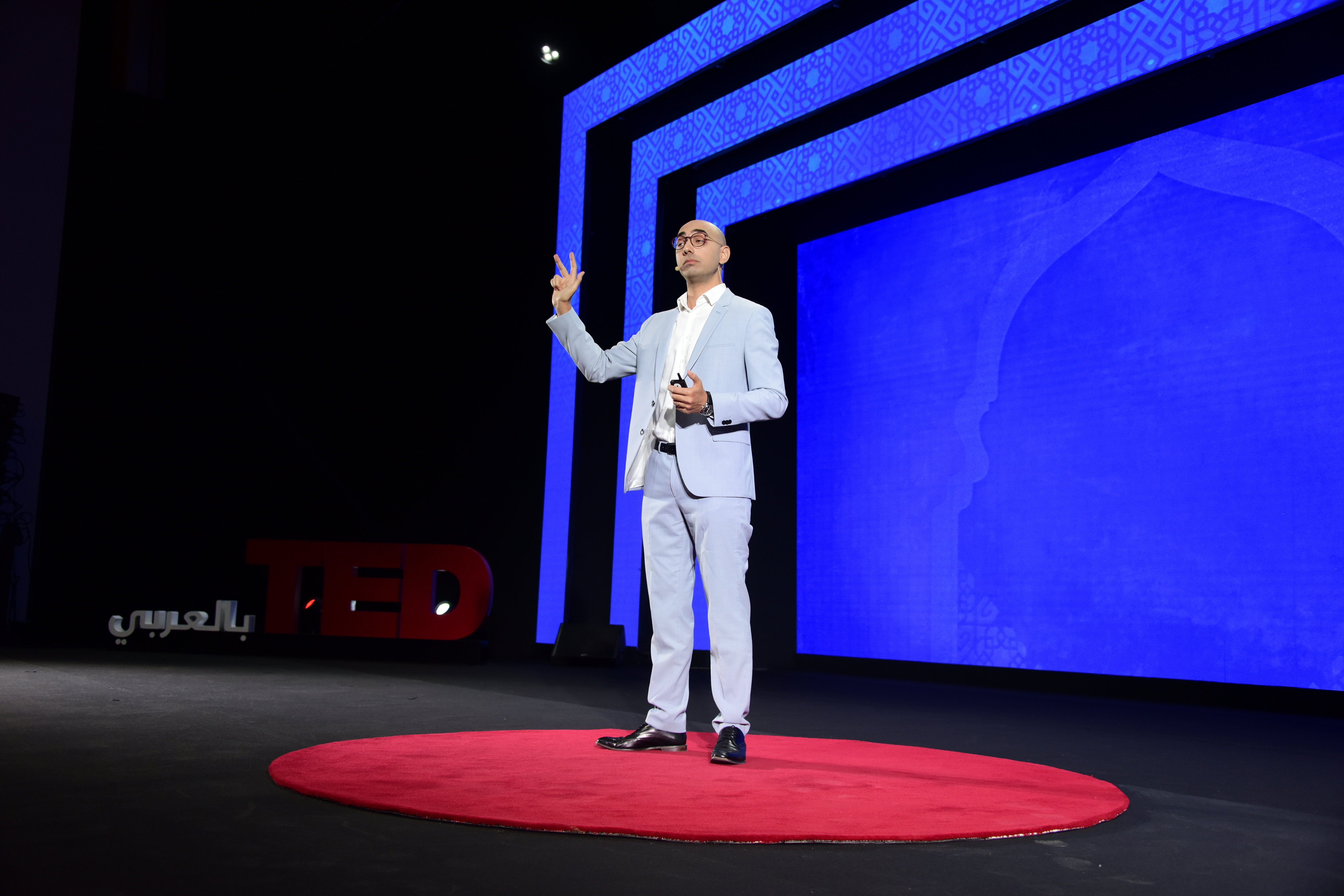 Big idea: We can build bridges and increase empathy through science.

How? Dr. Charles Malek thinks the only way for the Arabic-speaking world to transition from a consumer to a producer market is through investing in scientific research and technology here at home. Many students decide to work abroad because their home countries don’t provide them with the necessary tools and infrastructure to pursue their scientific research. The key to solve this problem is to teach with the scientific method – which relies on empirical observation, information gathering, analysis, conclusion and critical thinking – as opposed to lectures and rote memorization. Malek emphasizes the need to develop and promote scientific content in the Arabic language as a vehicle to build knowledge across the region. “If we decide to prioritize science education and make that the compass of the north, change will come,” he says. 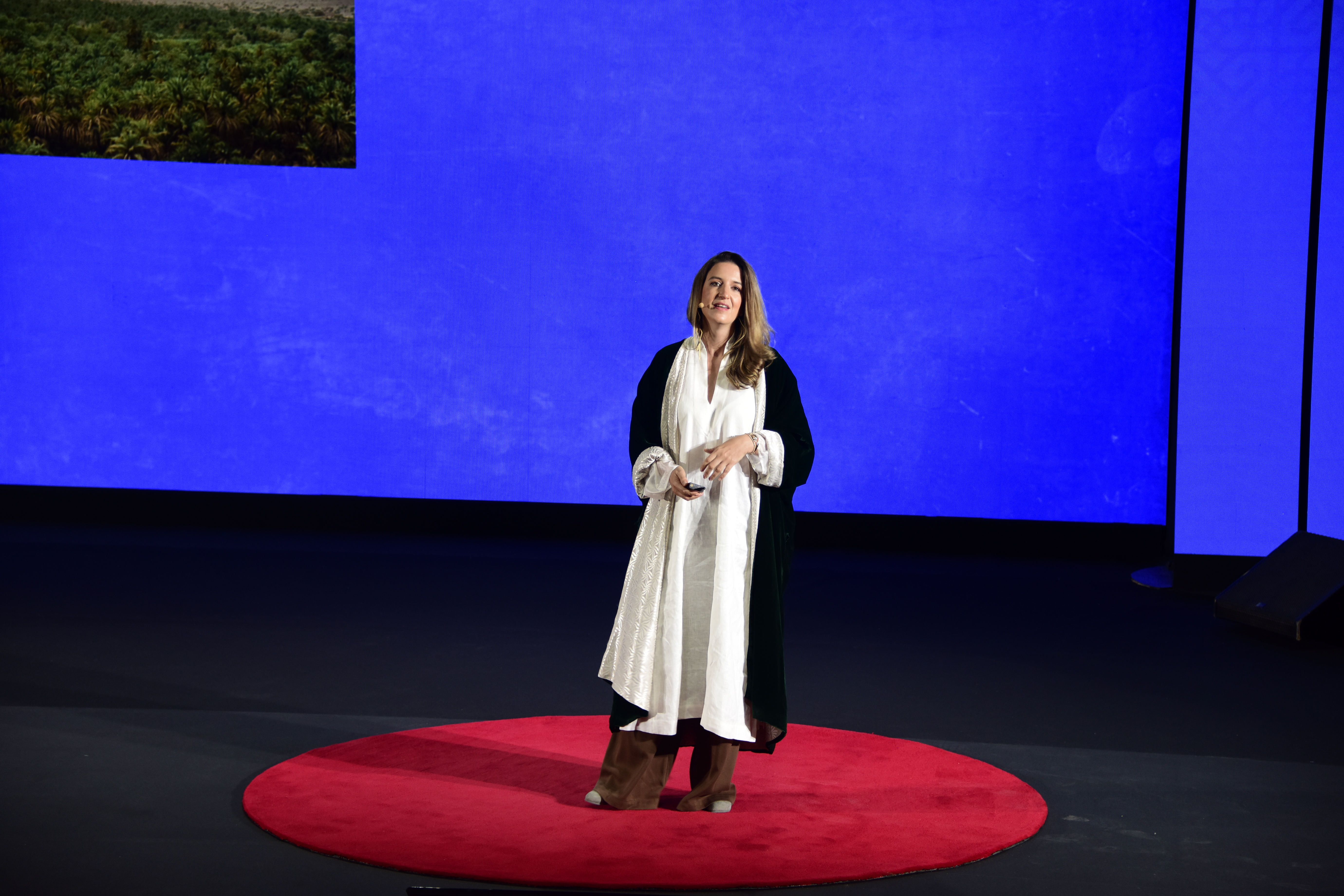 Big idea: A model for sustainable living and preserving cultural heritage lies in the desert.

How? The creation of oases, through careful land and building management, has made desert living possible for centuries. Increased tourism and climate change, however, are forcing local communities to leave, abandoning their cultural heritage as the desert creeps in. Aziza Chaouni is focused on reversing the damage by designing a new approach to sustainability and cultural heritage preservation. In her hometown of Fez, Morocco, the oasis of M’hamid Al Ghizlan was on its way to extinction until Chaouni established Joudour Sahara, a music school built with sustainable, local materials – such as rammed earth, stone, wood and bamboo – and powered by an autonomous, photovoltaic energy system. Thanks to the project, the desert has stopped trying to eat M’hamid, residents are staying in their homes and their cultural heritage is now thriving. She concludes her talk with a live performance by the students of Joudour Sahara. 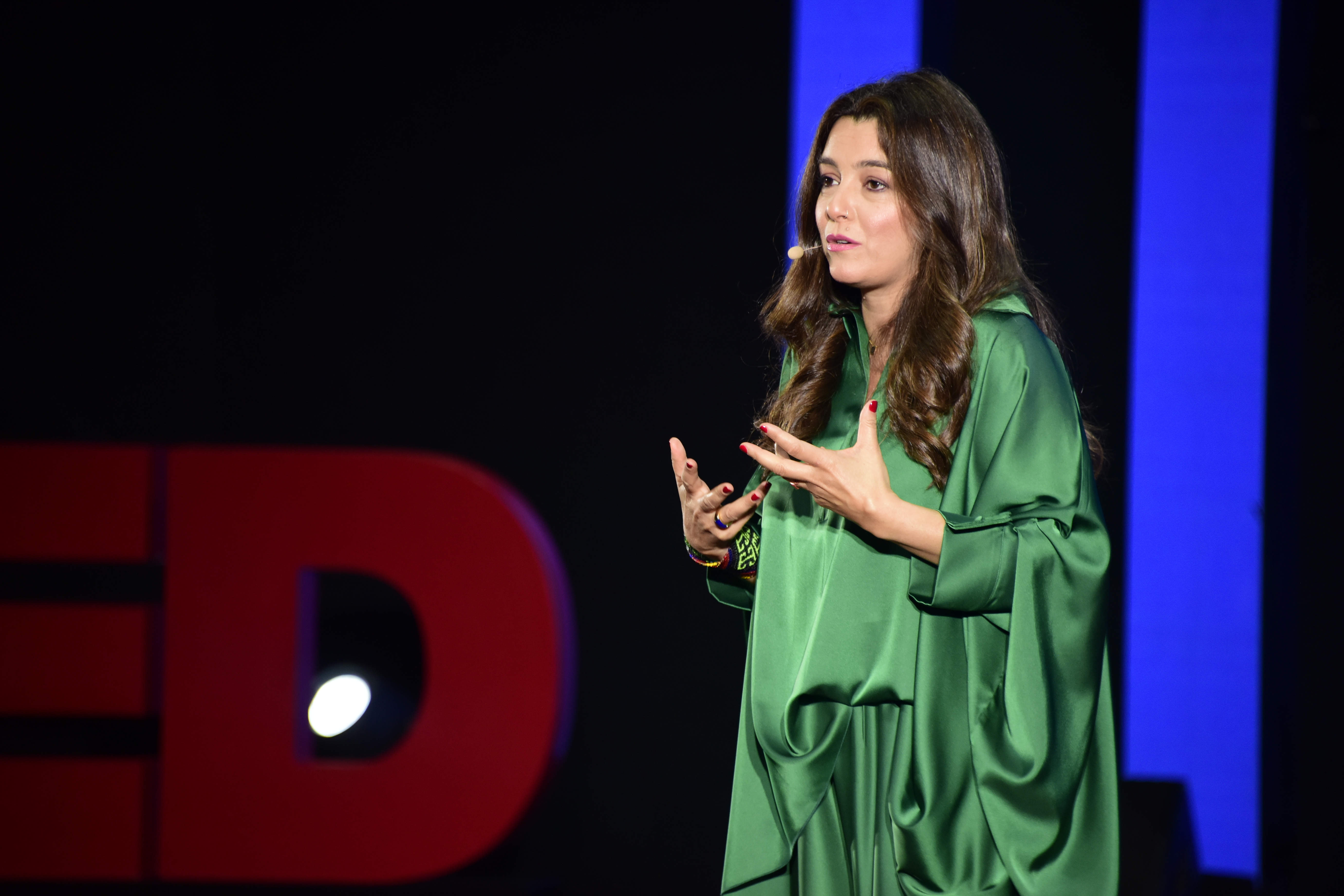 Big idea: Embrace the vibration of the Arabic language to shape your life and the life of those around you.

How? Words carry a vibration that can affect your other senses, says Suzanne Talhouk. She makes an impassioned case to get in touch with your inner voice and to embrace a world that stays away from using inflammatory, charged words. “If you want to improve your life and the life of those around you, start by using words that express love, harmony and forgiveness,” she says. She concludes by exploring the power of the Arabic language, saying that words shape the way we think and act. Arabic is one of the many languages that has a myriad of words that carry vibrations and high energy – so why are we abandoning our mother tongue so easily? 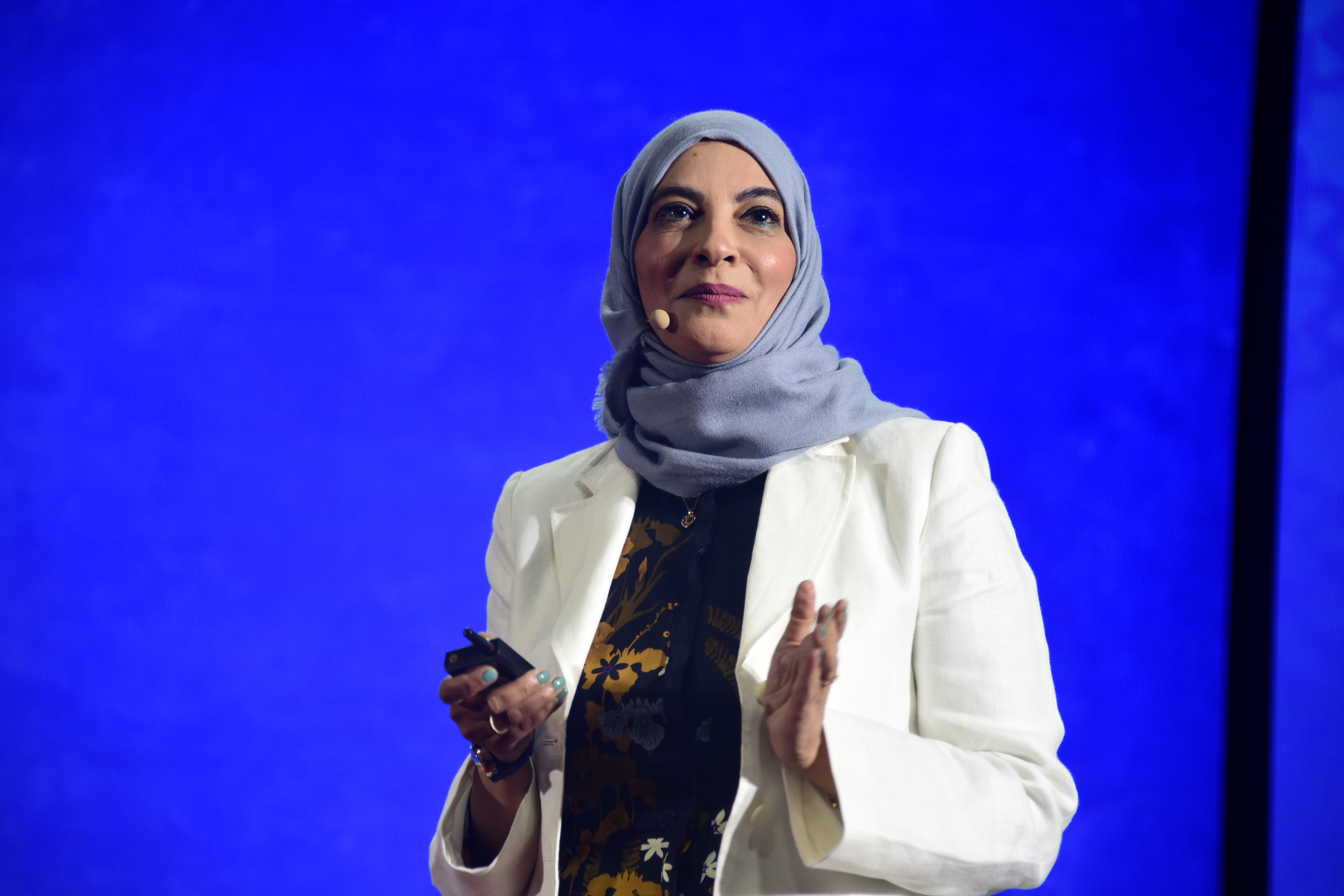 Big idea: A new model to foster innovation, address social challenges and build a bridge between possibility and hope.

How? Dr. Hayat Sindi has established a social entrepreneurship and innovation ecosystem for scientists and innovators to address pressing issues in their communities in the Middle East and beyond. The i2 Institute – launched in partnership with Harvard Innovation Lab, MIT, National Geographic, Pop Tech, PWC and McKinsey – was the beginning of Sindi’s journey to bring tangible solutions to the most vulnerable. Through its flagship program “Transform,” Sindi and her team worked with a group of innovators around the globe to launch a number of projects: battery-powered refrigerators that use solar energy in the borders of Uganda and Mozambique to store and preserve produce (and, later, COVID-19 vaccines); solar-powered houses in refugee camps in Bangladesh; and an electronic medical platform that employs 60,000 female doctors in Pakistan, providing dignified medical assistance to 100 million women and children in the outskirts of Pakistan, Afghanistan, Yemen and Iraq. “We can come up with amazing and visionary ideas,” she says. “However, they will become real and stronger only when they are connected to society.”

This piece was written by Lobna Hassairi and Doha Summaqah.