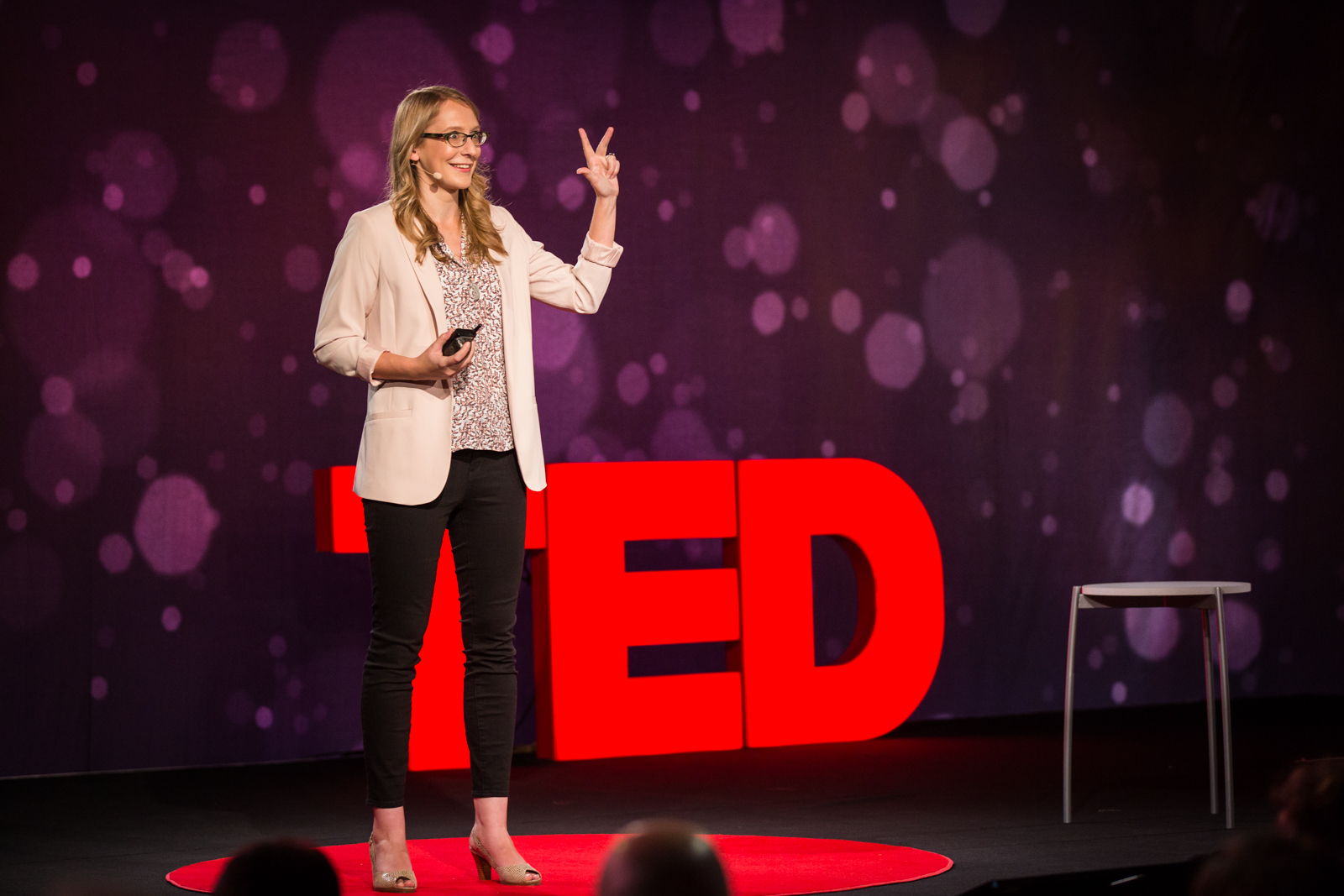 Astronomer Carrie Nugent hunts for asteroids that might threaten Earth — and figures out what we could do about it. She spoke onstage during TED Fellows talks Session 2 during TED2016, February 15-19, 2016. Photo: Ryan Lash / TED

TED Fellows are scientists, artists and activists and musicians. But they are also biodiversity mathematicians, culinary historians and any other combination of disciplines you can imagine.

Below, read short recaps of the talks in the second session of TED Fellows talks at TED2016, each a big idea that will make you think again.

Honor thy cosmic neighbor. Astronomer Carrie Nugent likes to keep close watch on our “oldest and nearest cosmic neighbors” — asteroids. She takes something out of her pocket, an asteroid fragment formed more than 4 billion years ago. “If you cut it open, you can see a pattern of metallic crystals that can only form out in space,” she says. She shows us this object because, she says: “Like all neighbors, asteroids sometimes drop by unexpectedly.” Nugent and her team use NASA’s NEOWISE telescope to search the far skies and catalog these celestial objects, determining their paths with incredible precision. She protects our planet by charting them when they get a little too close for comfort. “If we found a hazardous asteroid, we could nudge it out of the way,” she says. “Unlike earthquakes, hurricanes, or volcanic eruptions, an asteroid impact can be predicted and prevented.”

A different way to direct. Raised with strong Mohegan values, playwright and director Maddy Sayet noticed a divide between American indigenous languages and English. She sees a relationship between language and leadership – mainly, that the differences in the way of communicating impacted her role as director of her theater company. Sayet describes Native languages as fluid, diverse and all-encompassing: “Nothing is isolated or compartmentalized — because there are no hard lines breaking up our universe. Everything is woven together. Ideas lean on each other.” Determined to build stronger connections within her company and to lead with love, she sought out the Mohegan translation for the word ‘director.’ What she found is a phrase that encompasses her Native American values: Our Heart, She Leads Us There.

Should “blackness” exist? Race, biologically speaking, is a myth. The United Nations itself said this in 1950, points out writer and filmmaker Mitchell Jackson. Still, the construct of race has followed him every day as a black man, thanks to the statistics that circulate widely in our culture. In a moment of vulnerability, Jackson shares, “I used to be a drug dealer,” and tells the story of how one terrifying robbery changed his life. “Whiteness is an invention of the Europeans who colonized what we call the USA,” he says. “If you could choose to abolish white power, white privilege and white supremacy, would you? What if I asked if you’d also banish blackness?” Blackness and whiteness comes from the same place, he says. While the idea of blackness can unify and empower, it does damage, too. “The most revolutionary thing we can do is refuse it as a racial category and an idea.” 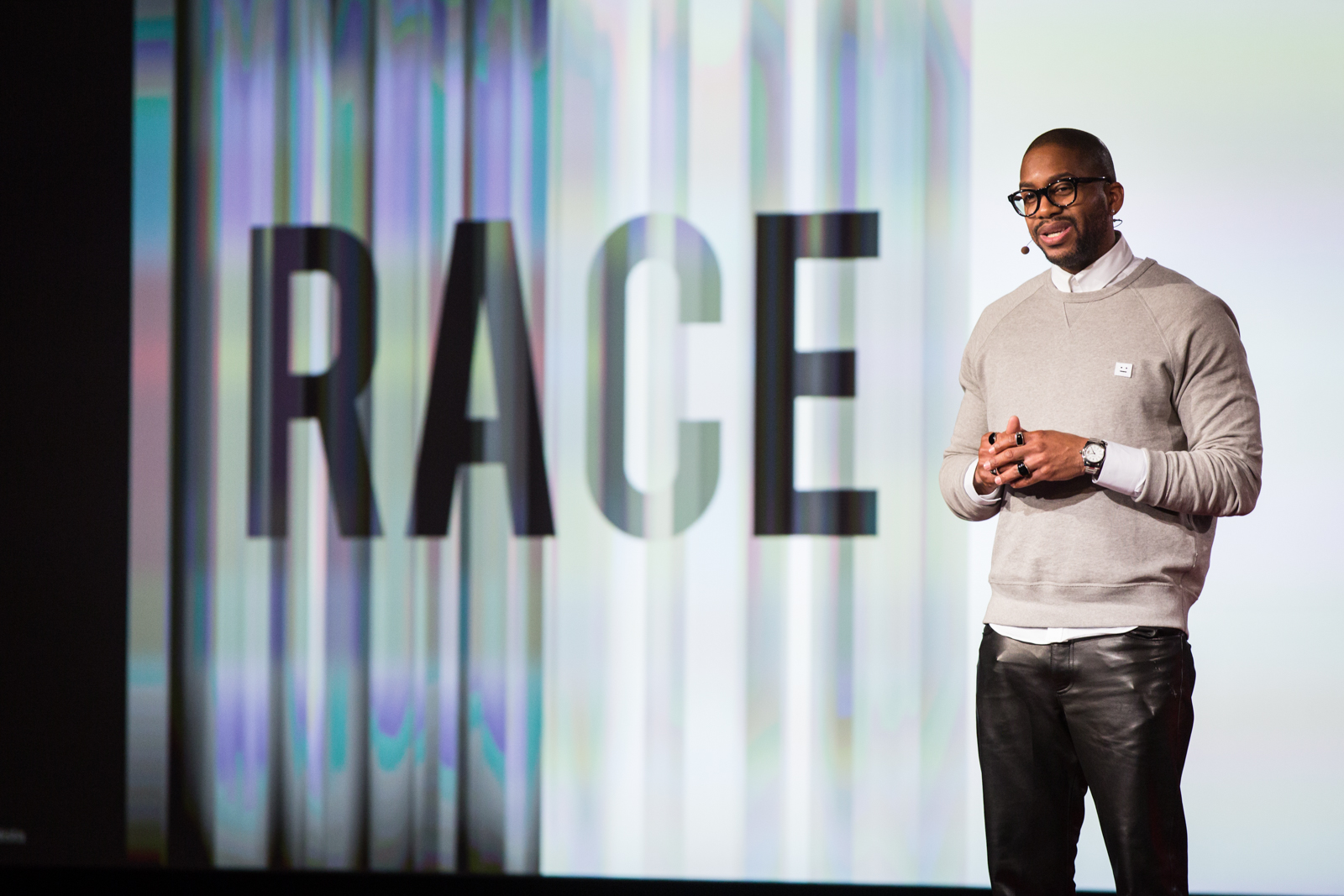 Writer and filmmaker Mitchell Jackson examines the idea of race — and what it may mean to leave it behind. He spoke onstage during TED fellows talks Session 2 during TED2016, February 15-19, 2016. Photo: Ryan Lash / TED

A new way to treat pancreatic cancer. Pancreatic cancer is deadly — only 5% of patients survive beyond 5 years — and that rate has improved little over the past 40 years. Laura Indolfi is a biomedical entrepreneur tackling pancreatic cancer head-on. Pancreatic cancer tumors have few blood vessels in them, making chemotherapy, which is carried in the bloodstream, less effective. “It’s like driving on a highway,” says Indolfi, “but your destination doesn’t have an exit.” Indolfi proposes an alternative to intense drugs: localized treatment. Collaborating with MIT, Indolfi designed a drug delivery device that acts at the tumor site as a cage to prevent it from spreading . Preclinical studies show that it could be 12 times more effective than traditional treatment.

An unconventional music education. Blitz the Ambassador opened this session with big-band flair, laying the verses of his songs “Wahala” and “Make You No Forget” over a six-piece ensemble. Now he’s back to talk about music. He grew up in Accra, Ghana, and says the “magic of music” was all around him. “I started turning everything around me into a musical instruments. Plastic pipes became trumpets,” he says. “I understood my personal metronome was the constant cacophony of sounds in Accra … This was my music school.” So when he moved to New York and people started asking him, “Where’s the sheet music?,” he didn’t understand. “Long before music was charted or studied in schools, it was part of our everyday life,” he says. “It was free, innovative, open to interpretation.” He attributes his success to his ability to find his own way, and challenges us to embrace this skill in the pursuits we truly love.

A bill of rights for sexual assault survivors. Next week, Amanda Nguyen will introduce a civil rights bill at the US Capitol: the Sexual Assault Survivor Bill of Rights. It’s meant to advocate for the 25 million to 30 million rape survivors in the US. Nguyen is one of them. “The greatest injustice I have ever faced was not the act of rape itself,” she says, “but the subsequent denial of my rights in the country I love.” Getting a rape kit done takes hours “because the crime scene is your body,” she says. In some places, victims have to fight every six months to keep kits from being destroyed, even when the statute of limitations is far longer. “Justice depends on geography,” says Nguyen. “My goal is simple: Fix the patchwork of rights. Take the rights that already work in some states and put the best practices together so that everyone is equal under the law.” 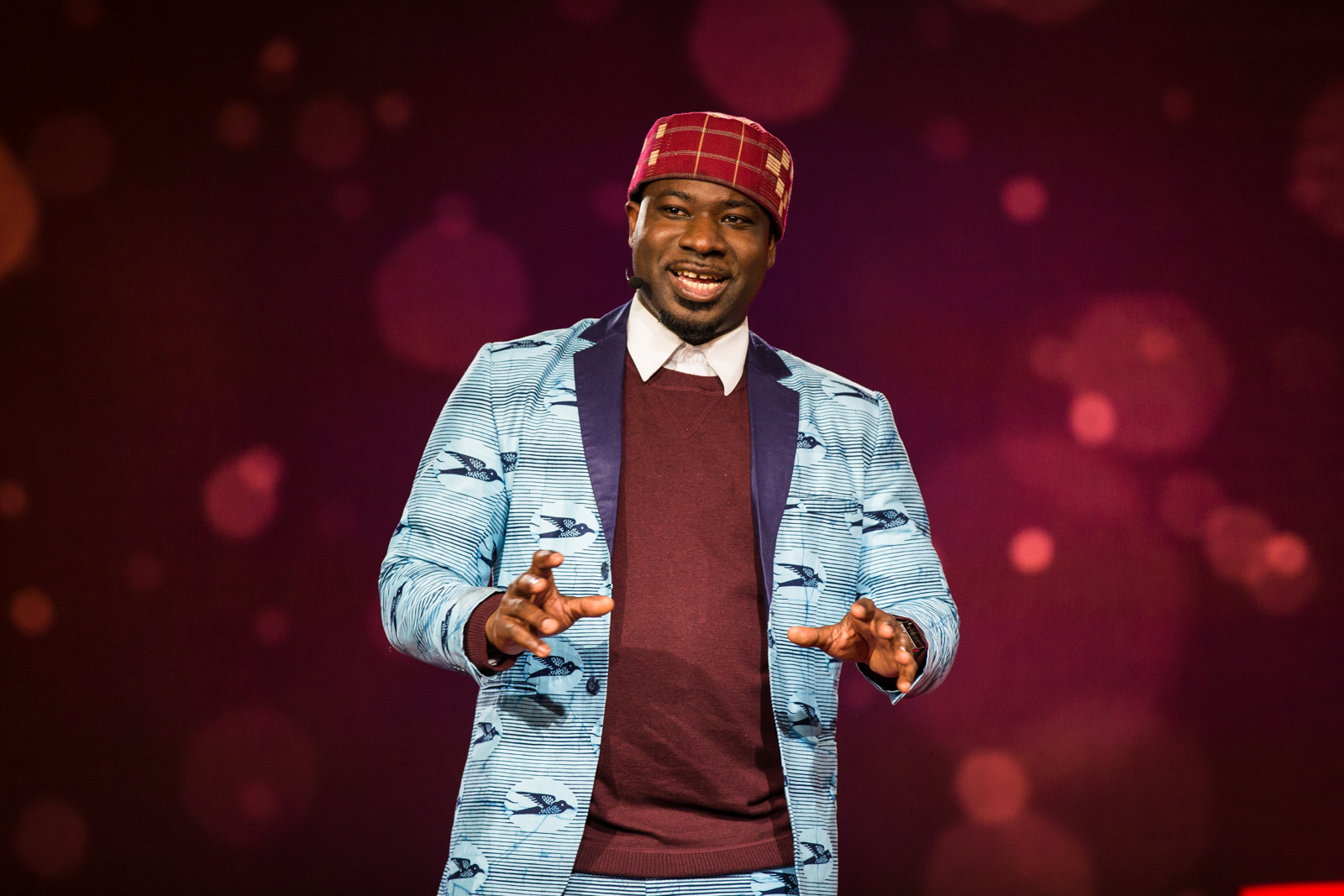 The future of solar power. Sam Stranks studies ways to print perovskite, a man-made mineral, on glass, in order to collect solar power. Perovskite cells can be colorful, opaque or transparent, making them beautiful materials to use in architecture. “Imagine a skyscraper with colorful perovskite-tinted windows that shade the interior from hot sunlight, by converting it into electricity, reducing the cooling bill while also providing power,” says Stranks. Perovskite cells are cheap to make and lightweight enough to be “suspended on a soap bubble,” making them easy to ship to developing countries that lack electricity. And this technology is only getting better: “In the three years since we tweaked the perovskites, their efficiency in converting sunlight to electricity hit 21% and rising – a milestone silicon took 30 years to reach.” Stranks says that in fact perovskite can be printed on top of silicon, making a tag team of electricity-generating materials.

The tree of biodiversity. Hélène Morlon is a biodiversity mathematician, using supercomputers, math and molecular phylogenies to graph how species are related through evolution. She shows the phylogeny of birds, which looks similar to a tree: each bird represents a leaf, and the branches tell us “which species descended from which ones, and when their divergence happened.” However, there are things about evolution that phylogenies don’t reveal, but math can help find. “I imagine scenarios of how biodiversity might have evolved, and use mathematics to compute how probable each scenario is,” she says. She then shows a broader phylogeny of all mammals, where humans are only a small leaf on the branch of a vast tree, having erupted in the last seconds of evolution. “We managed to dramatically impact the rest of the tree of life, disturbing an equilibrium that results from millions of years of evolution.”

The importance of culinary justice. Culinary historian Michael Twitty grew up hating his Black heritage — and the soul food that came with it. But as he developed a love affair with history, Twitty began to notice the lack of recognition that this food receives in how it shaped American traditions. “What do slaves have to teach us about food in 2016?” he asks. Actually, a lot: they ate organically, locally; they used the whole animal. Armed with culinary knowledge, Twitty seeks to return cultural dignity — and financial capital — to African-American communities in the South, an effort he calls “cultural justice.” With his initiative The Cooking Gene, Twitty fosters a restorative dialogue about both food and oppression. “When you call your cuisine ‘soul,’ you’re after something metaphysical,” he says. “It has the power to transcend differences.”

Comedy as a social weapon for change. Negin Farsad calls herself a “social justice comedian.” After she and a group of comedians used their brand of humor — not partisan, inviting and warm, funny but sneaky — to create a movie called The Muslims Are Coming!, they encountered a wave of hate speech against Muslim stereotypes. So they decided to turn that hate speech into a helpful poster campaign in the New York subways — that the transit service tried to block. The group fought back — and: “We won!” Farsad says. “And I wondered, is this how blonde white women feel all the time?” The takeaway, she says: “If you’re gonna be bigoted, you might as well use a better font.”

And after a beautiful song from Somi, the session concludes. Want to hear some Somi? Visit this beautiful improv performance from last year’s TED… and sail away.