1905 was a big year for Albert Einstein. He was 26 years old and working in the Swiss Patent Office when, in the span of seven months, he published four papers that would eventually be hugely influential. In these papers, he proposed that light could be a particle, proved that atoms existed, laid out his theory of special relativity and offered up his signature equation E=MC2.

When TED-Ed decided to create a lesson on this year in Einstein’s life, they were shocked when animators Oxbow Creative submitted their final animation and the file was under 1GB in size. Usually, these files are huge, more like 4 or 5GB. But any fears that the small package wouldn’t pack a huge punch were quashed when they saw the final product: the lesson is clever, swift and striking. Oxbow Creative opted for a beautiful, minimalist style for the lesson — which allowed for a level of precision they hope would make Einstein proud.

We caught up with Oxbow Creative’s Evan Deutsch and Jon Portman to find out more.

The animation is beautiful. Tell us more about the minimalist style.

Jon Portman: Einstein was, by all accounts, a jovial character and a bit of a troublemaker, so we wanted to keep the illustrative style light and fun. We also chose a minimalist visual program with a very controlled, tricolor palette, keeping most of the action small and center-screen. The four theories discussed in the story have had a massive influence on our understanding of the universe, and yet they came from inside the head of this odd little German fellow who reviewed patent applications for a living. This disproportion was what inspired us to portray Einstein as a brave little character in a world too big for him. Quite fittingly, once he gets his deserved recognition in the final sequence, the scale snaps back in the opposite direction and our solar system is revealed to be Einstein-centric after all.

Although I wouldn’t go so far as to call this our go-to style, we certainly hate clutter. In all of our work, especially projects with complex concepts, we feel that filling the screen with distracting, in-your-face graphics and transitions does a huge disservice to the viewer. We prefer to concentrate their attention on focused, thoughtful action that they can absorb and retain. “Less, but better.” 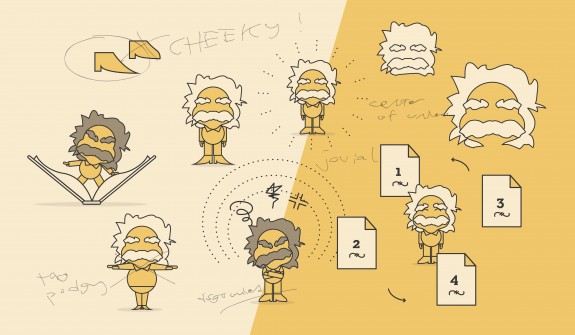 An early sketch of Evan Deutsch and Jon Portman’s animation.

How long did the animation take?

Evan Deutsch: Start to finish, this project took us about 7-8 weeks. Internally, we went through several rounds of illustration and storyboarding until we felt we really captured the dichotomy of Einstein’s quirky, whimsical character and his world-changing discoveries. We also went through several rounds of feedback with [TED-Ed Educator] Larry [Lagerstrom] to ensure that all the details were accurate from a scientific perspective. Having the academic support of Larry and the creative feedback from TED-Ed made for a really stimulating and efficient process.

The music for the piece is also great. How did you pick it?

JP: We knew we wanted something classical, to echo the elegance of Einstein’s theorems. We happened upon this beautiful little arrangement by Debbie Miller and Gavin Keese. We were super psyched when we first heard it; its energy and tone just felt right for the story, and it has this great almost gypsy-like feel to it. We consider the musical accompaniment to be just as important as the animation itself, so we try to find the right track early on and let it inform the visual process.

Did you get to choose the subject for the lesson, or was it chosen for you?

JP: TED-Ed is really great about giving the animators choice on the subjects they feel passionately about. I took quite a few physics classes while at school — I was one credit away from a minor, much to my chagrin — and have always been fascinated by how the universe behaves. When I mentioned this to the TED-Ed folks, they handed us the Einstein script. We jumped at the chance to bring his story to the screen. 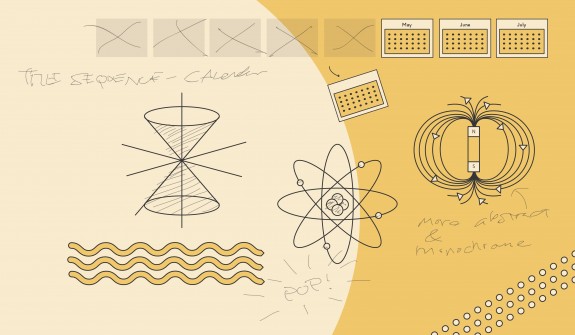 An early attempt at figuring out how to animate the scientific concepts.

What was the most interesting thing you learned about Einstein over the course of the lesson?

JP: Without a doubt, the fact that Einstein published all four papers within the span of seven months, during which he was working at his day job six days a week. I think it’s safe to assume he did quite a bit of daydreaming. Scarily enough, he was just about our age when he did so.

Any pitfalls along the way?

ED: Because of the seemingly limitless possibilities for approaching Einstein’s character, getting started actually proved the biggest challenge. It took us quite a while to land on a look and feel that felt 100% right. We love that part of the process, though.

JP: Our favorite part of the process was also the most challenging: maintaining scientific accuracy in portraying the concepts. Larry was hugely helpful on this front. For example, in the solar system scene at 0:47, while it’s certainly not to scale, the planets are actually orbiting at the correct speeds relative to one another. Please tell me someone noticed this; it took an inordinate amount of time to figure out. 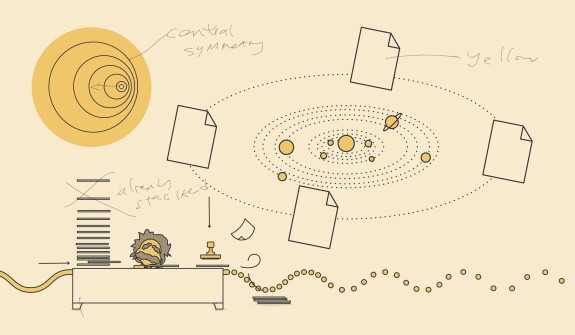 An early exploration of how the different elements would interact with one another.

Read much more about animated lessons on the TED-Ed Blog. Some other fine stories: