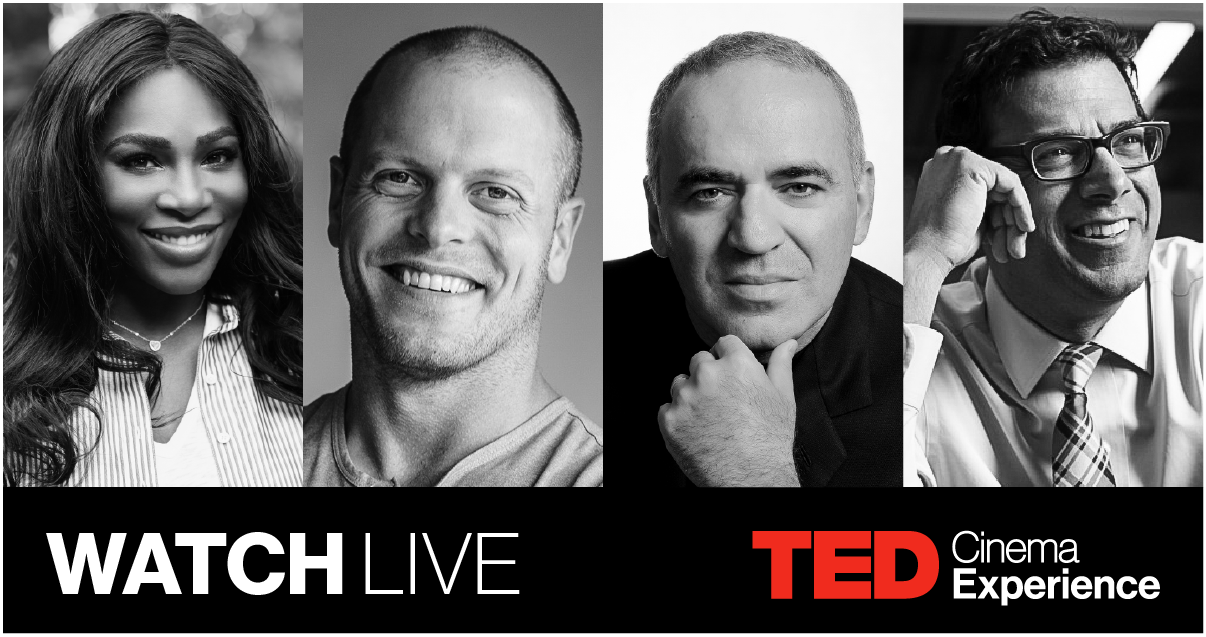 You probably watch TED Talks on an assortment of small screens. But next week, you’re invited to experience them on the big screen.

As the TED2017 conference takes place in Vancouver, Canada, special sessions will be broadcast live in movie theaters across the United States and world. On April 24, the Opening Event will bring surprising life advice from Tim Ferriss, insights on AI from former world chess champion Garry Kasparov, an inspiring idea from Rabbi Jonathan Sacks and a thrilling performance from music video masters OK Go. On April 25, the Prize Event will include a Q&A with Serena Williams, a simple idea from Atul Gawande, a surprise guest who’ll boggle your mind and the reveal of 2017 TED Prize winner Raj Panjabi’s wish for the world.

These sessions will screen live in the US and Canada, and on time-shifted schedules internationally. Then shortly, after the conference closes, you’re invited to enjoy a Highlights Exclusive, featuring the very best talks from the week-long conference. This is truly your ticket to TED2017, so check local listings for times.

“I’m thrilled that we get to share the TED experience with a much wider audience,” said TED Curator Chris Anderson in a preview post. “Watching a full session is nothing like watching individual TED Talks. It’s dramatically more powerful, more immersive.”

This will not be the kind of movie-going experience where people stare ahead and chomp popcorn. The talks in these events will ignite your curiosity and flip your thinking. As you think through these big ideas and make connections between them, we expect conversations to spark between friends and strangers. Just as they do at the conference.

More than 100 organizers of TEDx events are hosting discussions before or after screenings. The organizers of TEDxEvansville went on a public access show last week to let people in Evansville, Indiana, know that they’re taking over a local multiplex for the Opening Event. Meanwhile, TEDxPeachtree in Atlanta, Georgia, is inviting past speakers for a meet-and-greet after the TED Prize Event screening, to keep the conversation going.

Below, see if your local TEDx chapter is hosting a cinema event near you: