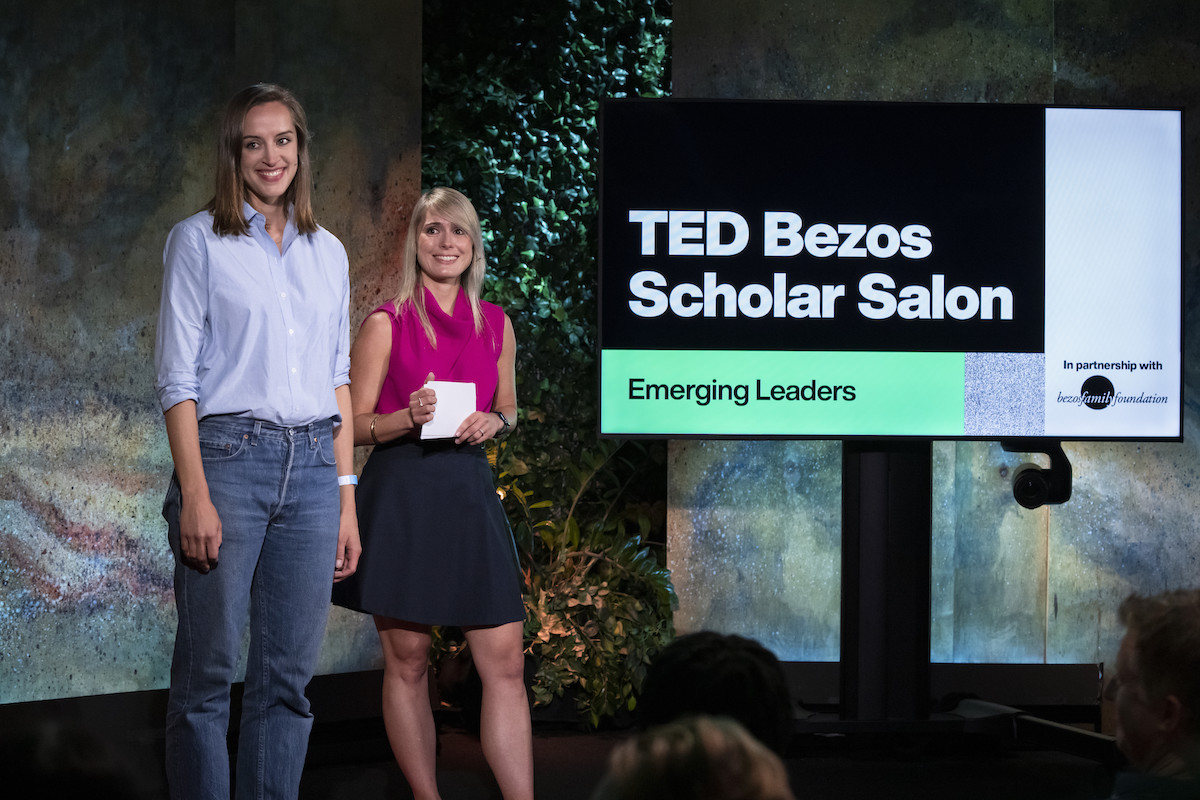 The first-ever TED Salon co-created in partnership with the Bezos Family Foundation featured incredible ideas from the Bezos Scholars — extraordinary young people thinking about the future of education, human rights, financial systems and more — as well as some special TED Fellows guests. The result of a years-long collaboration between the Bezos Scholars and TED Fellows, this energetic, future-facing TED session showcased the organizations’ shared belief in and commitment to socially engaged innovation and human ingenuity.

When and where: Friday, September 9, 2022, at TED World Theater in New York City

Comedy: From TED Fellow and comedian Negin Farsad, who opened the salon with a stand-up set that hilariously tracked what’s happened over the last couple of pandemic-fueled years. 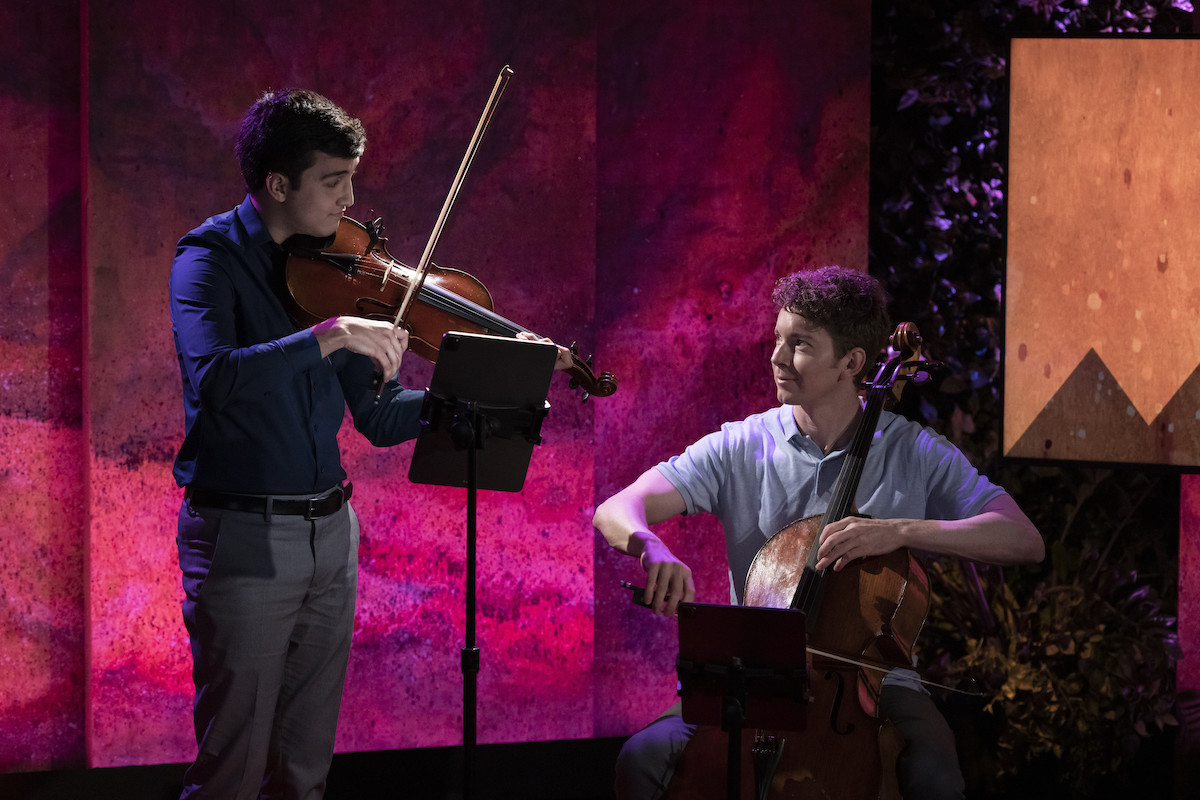 Music: From TED Senior Fellow, cellist and classical rockstar Joshua Roman and Bezos Scholar and violist Matthew Garcia, who closed out the session with a stirring rendition to the first movement of Beethoven’s Eyeglasses Duo. 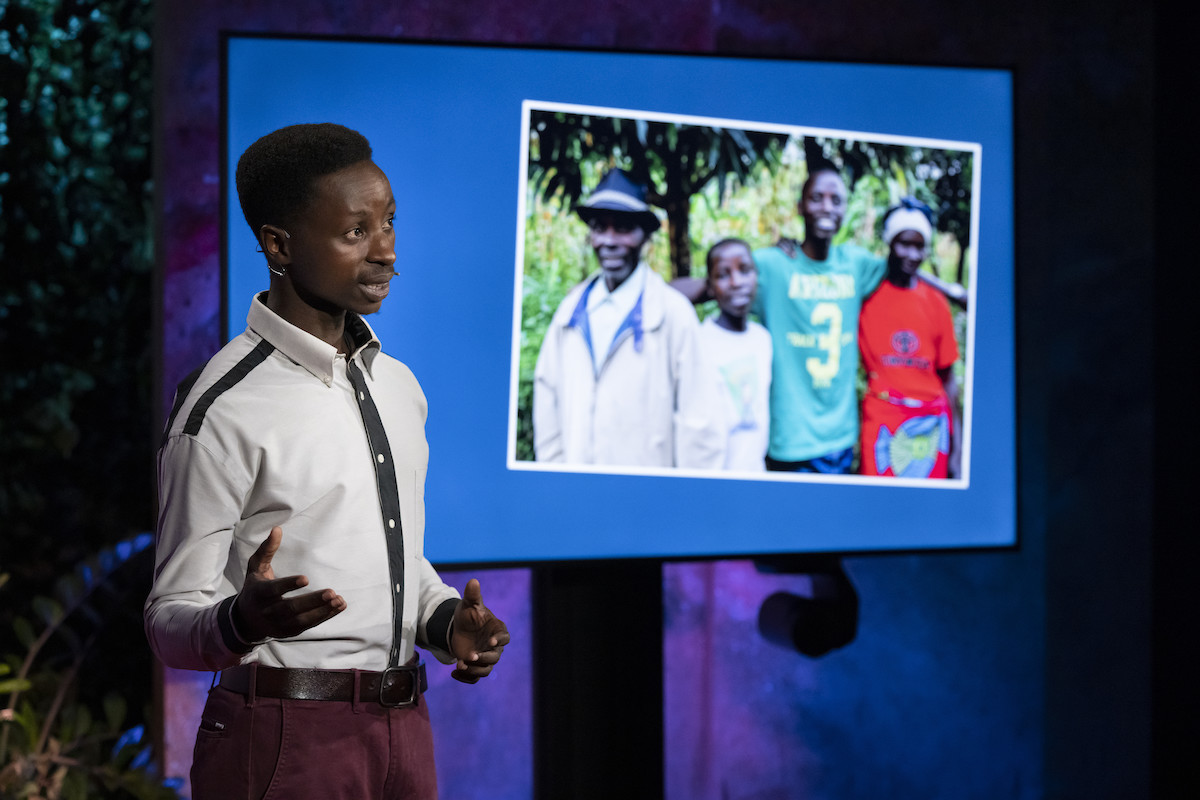 Big idea: Gamifying school curricula can help get students in refugee camps get excited about learning.

How? Going to school in a refugee camp is complicated: students encounter crowded classrooms, a rigid curriculum and limited access to teachers. Joel Baraka grew up in the Kyangwali refugee camp in western Uganda and remembers that what he liked best about his school years were the hours he spent outside the classroom playing soccer with his friends or the card game Spades. That’s why as an entrepreneur, Baraka wanted to find a way to “gamify” the learning experience for other refugee students. He presents the educational board game he created, 5 STAZ, that schools in Kyangwali now use as a daily part of schoolwork to help students master their curriculum – and have fun while doing it. 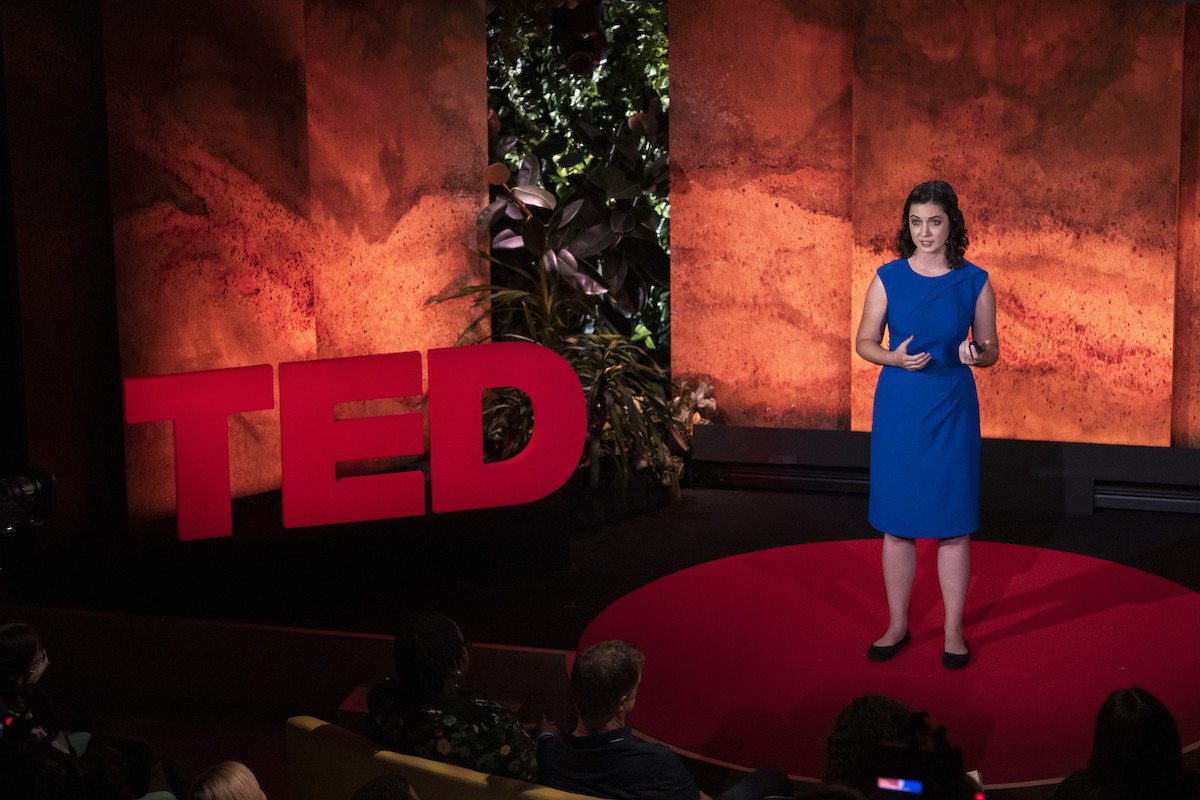 Big idea: Despite the global conversation around inclusive societies and workplaces for all races and genders, people with disabilities are still routinely excluded from education and employment. Making up an estimated 15 percent of the world’s population, their potential contributions remain unknown and unexplored. It’s time to build an inclusive future for people with all different kinds of abilities.

How? Meghan Hussey, a disability inclusion advocate and Global Development and Government Relations Director for the Special Olympics, believes that everyone benefits when people with disabilities are allowed to thrive — and the only thing holding them back from that is our own attitudes towards “those people.” According to Hussey, an inclusive future is four steps away. First, we must re-examine our assumptions and stereotypes around disability. These arise from the lack of disabled people in our everyday lives, and that lack is largely due to a lack of accommodations. Second, we must actively remove barriers and invite people with disabilities into our lives and organizations. Third, we should recognize how other exclusion issues — gender-based violence, health care accessibility — intersect with each other. And finally, we must listen to the voices of people with disabilities, because they will tell us what’s needed to remove the barriers keeping them from mainstream society. 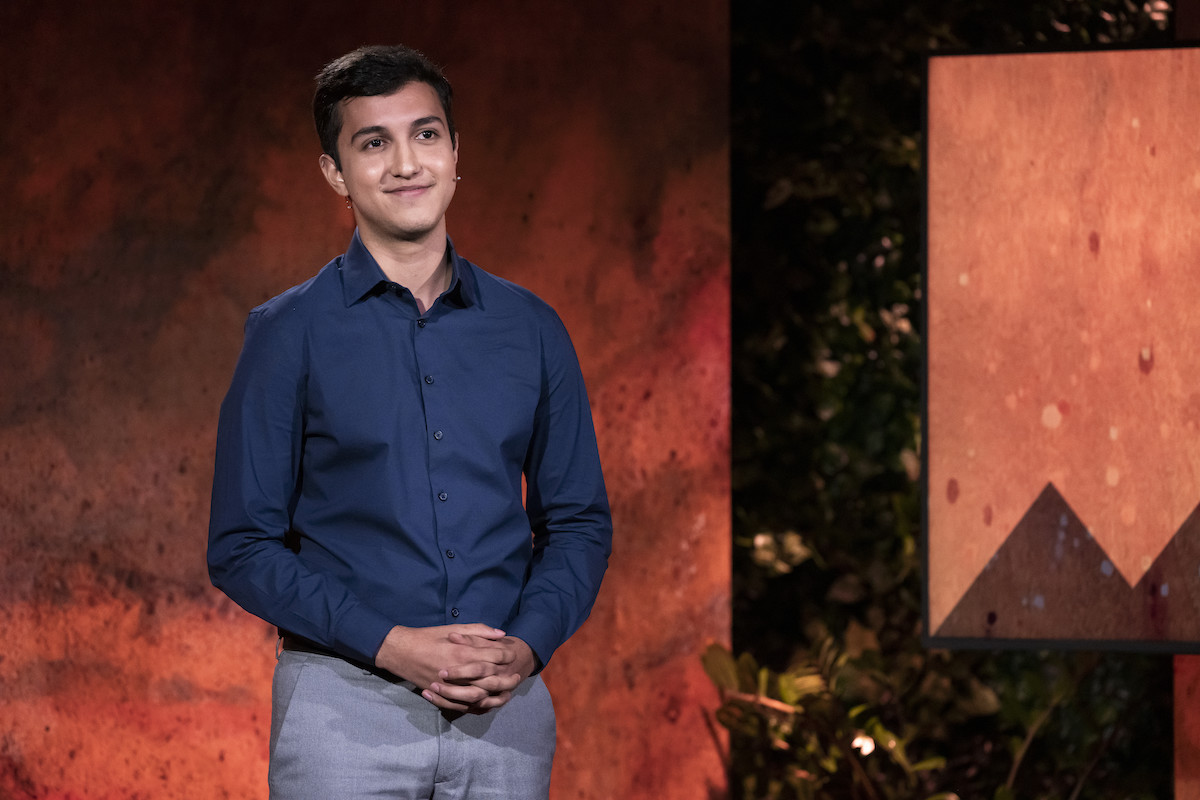 Why? A Latinx son of immigrants from a small Texas border town, Matthew Garcia grew up loving to play the viola but living far away from classical music meccas like New York and Chicago. Through years of intense practice and community support, Garcia overcame the odds, traveling with other elite young musicians to tour four continents and play Carnegie Hall – but then he hit a wall. One of the best violists in the world told him he would never succeed as a professional musician: he hadn’t started early enough and hadn’t gotten the private lessons he’d needed, the violist explained. He had missed out on key resources that gave his peers an edge. Garcia never gave up the viola, but this devastating advice changed his life and spurred him to action. When the COVID-19 pandemic hit, he founded a virtual nonprofit that provides free virtual private lessons to thousands of youth outside of major US cities. By broadening our ideas about what nonprofits can accomplish in the digital age, Garcia says, we can break down geographic, economic and racial barriers to historically exclusive fields like classical music, art and research. 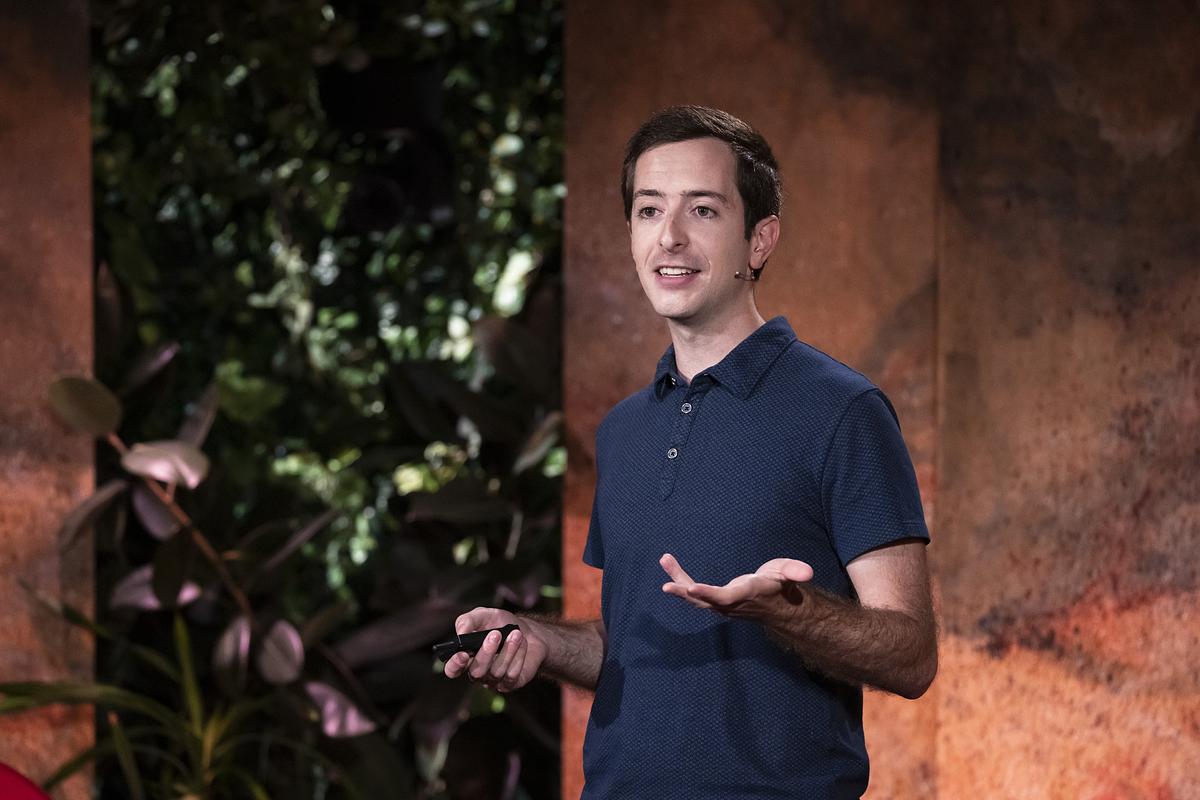 Big idea: Millennials and Gen Z are set to become the richest generations in history — inheriting 30 trillion dollars’ worth of economic rewards in the coming years. But they’ll also inherit climate change impacts, global instability and a huge and growing wealth gap. Investor Miguel Goncalves believes that wealth can be leveraged to solve these problems through ESG (Environmental, Social and Governance) investments, which weigh environmental and social costs and benefits in their return calculations. But how can investors overcome the inertia and bias that many old-guard investors hold towards ESG investments?

How? Recent data suggests that about half of institutional investors consider the benefits of ESG investing to be unproven at best, or unclear at worst. Goncalves thinks that institutional investors are guided by expectations as much as by data, and when it comes down to it, “expectations create reality” — in other words, ESG investing won’t work if people don’t believe in it. To change expectations, Goncalves believes analysts could alter financial metrics to focus on what really matters to each industry, rather than cherry-picking the data that makes companies look good. In addition, financial forecasts should weigh potential blowback from environmental irresponsibility, social scandal or wealth inequality. But what Goncalves believes we really need to make ESG investing work is trust: a belief that companies that do good will be around longer, perform better and, in the end, create sustainable wealth. 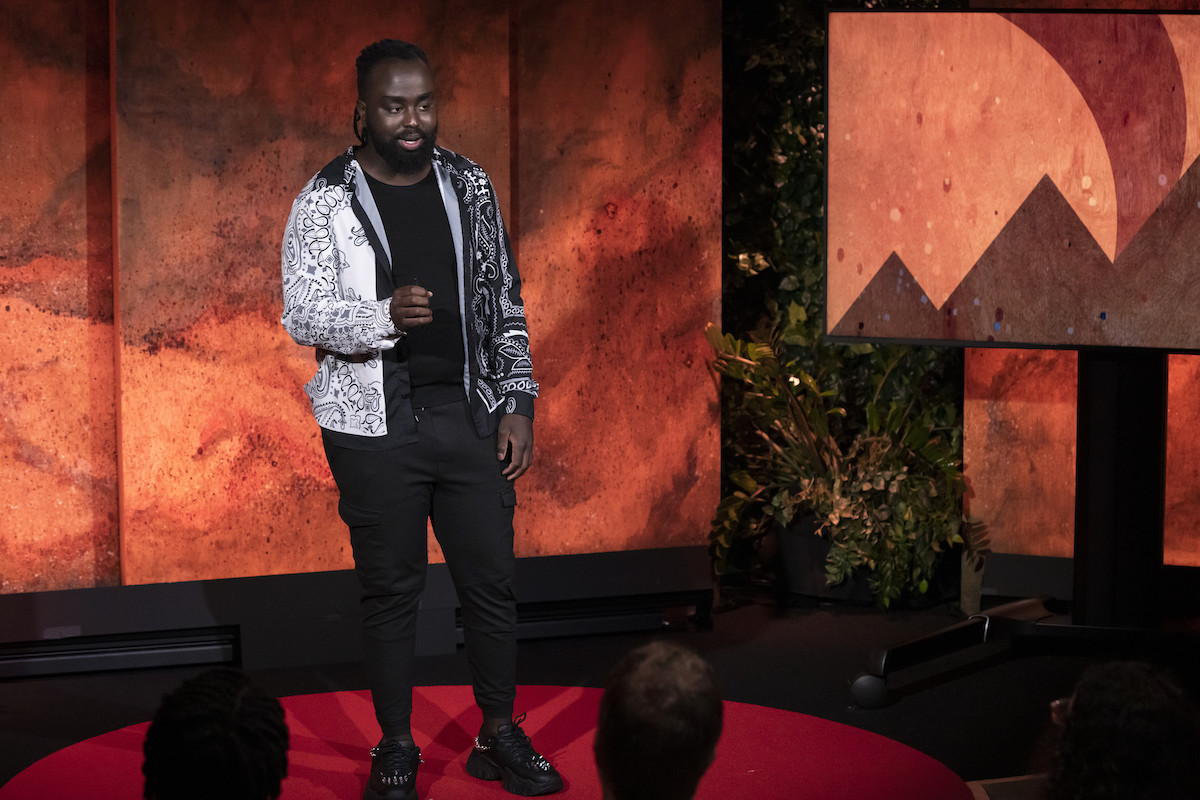 Big idea: In many African countries, outdated colonialist laws make it dangerous for LGBTQIA+ people to share their sexual orientation, gender identity or gender expression. In response, online communities are becoming vital safe spaces to combat hate and help people find the support and resources they need to thrive.

How? Okong’o Kinyanjui co-created the Queer African Network, an online platform aiming to provide every queer African with access to verified opportunities, mentorship, fundraising and support. Through a three-week probation period on the network, community leaders are able to authenticate account holders, keeping bots and blackmailers out of private group chats and events. Once safety is established, the community can offer connections and mentorship, moving people closer to financial stability, without sacrificing their identity. There’s also space for queer Africans to share their stories, creating an archive of their lived experiences that can be used to allocate resources. Through constructive online spaces, communities can challenge oppressive systems and create new structures that prioritize collaboration over discrimination.