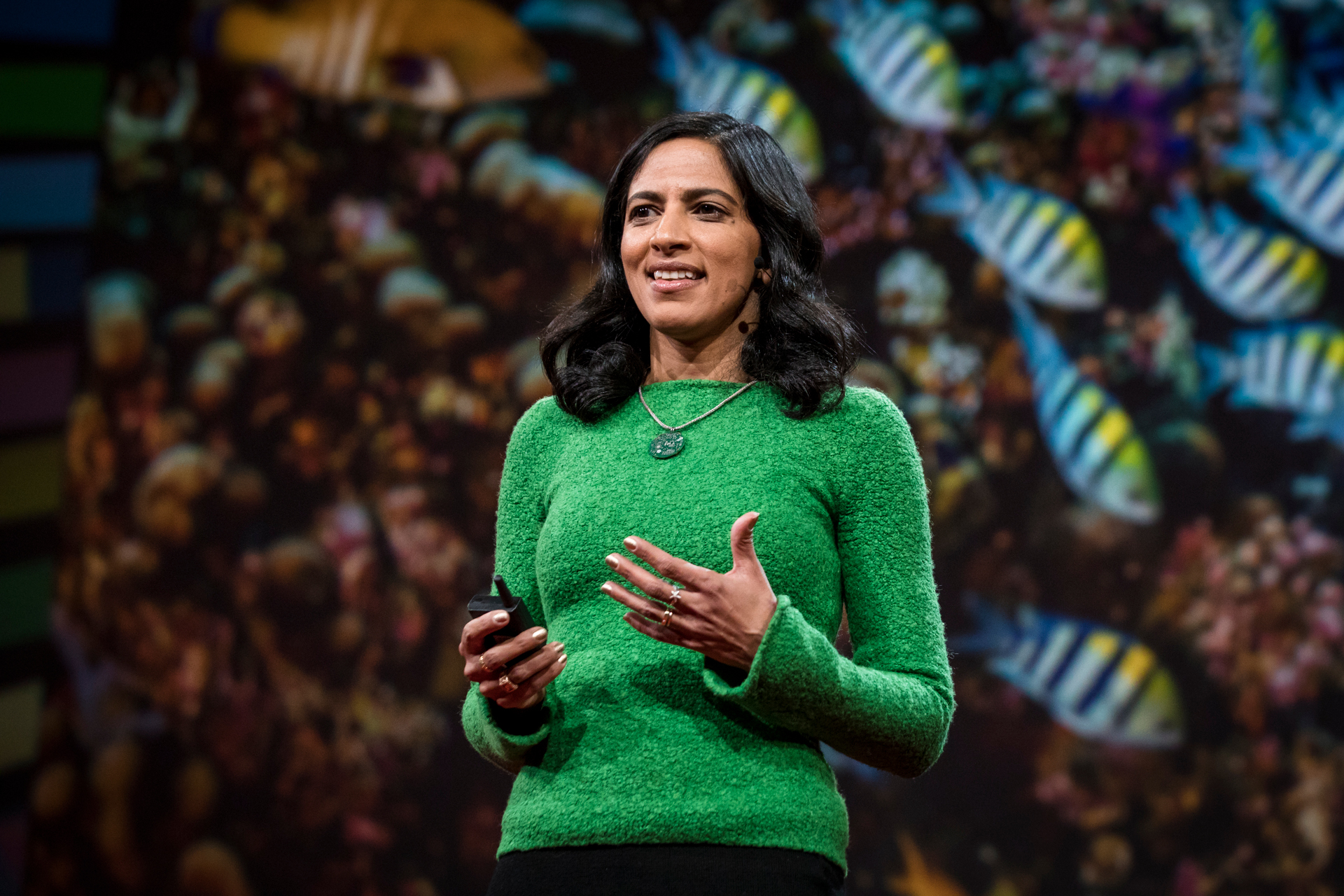 Computer scientist Radhika Nagpal’s defining moment came on a snorkeling trip in the Bahamas. As she stuck her head beneath the surface, trying hard to breathe through the narrow plastic tube, she saw a huge school of yellow-and-black striped fish. She was struck by how the school swerved to change direction not as if it were made up of hundreds of individual fish but as if it were a single entity with a collective mind.

In sci-fi, we see AI that’s modeled on a single amplified human-like intelligence. But collective intelligence, like that exhibited by a school of fish, is a type of intelligence found in nature that’s very different from our own. Since her trip to the Bahamas, Nagpal has spent her career studying collective intelligence systems, searching to understand the rules that govern them so that we can create our own — using theory, biology and robotics.

In a school of fish, each individual is tiny compared to the size of the collective, and there are no leaders. Instead, the collective behavior is governed by interactions between each fish and the few neighbors that surround him. It’s these interactions between individuals, and the rules of engagement shared between them, that Nagpal is interested in applying to robotics. “Once you understand the rules, many different kinds of robot visions become possible,” she says.

Nagpal and her colleagues have created a colony of 1,000 relatively simple robots that exhibit collective intelligence. The robots are small, about the size of a quarter, and they interact with one another using rules of engagement similar to the ones that you might see in nature, such as spontaneous synchronization, pattern formation and migration.

For example, the colony of robots can assemble to form complicated patterns like the letter “K.” And just like in the school of fish, no robot is in charge. “Every robot is only talking to a small number of robots nearby it,” she explains. “It looks for a place to fit in based on its pattern rules.” Based on these rules, the robots work together to accomplish a common goal. Nagpal describes a point where the illusion becomes so perfect that it no longer seems like a school of robots at all — but one body moving together.

The possibilities aren’t limited to the way collective intelligence appears in nature. “We can take these rules, combine them and create entirely new collective behaviors of our very own,” Nagpal explains. “With the right motion rules and right pattern rules, we can actually get the robots to build whatever we want.”

The potential applications of this work are broad, ranging from robots that build flood barriers to robotic bees that pollinate crops to underwater schools of robots that monitor our coral reefs. But understanding collective intelligence has implications beyond our robotic companions.

While science is a stunning manifestation of collective human intelligence, we have a long path to walk to perfect the system. “Who does science determines what science gets done,” Nagpal says. She asks us to wonder about what the world would look like if all children grew up believing they could be part of the scientific and technological community — and if adults of all professions, not just scientists, believed they had a say in how science and technology became part of our lives.

“I believe that we can choose our rules, and we can engineer not just robots, but our own human collectives,” Nagpal says. “And when we do, it will be beautiful.”