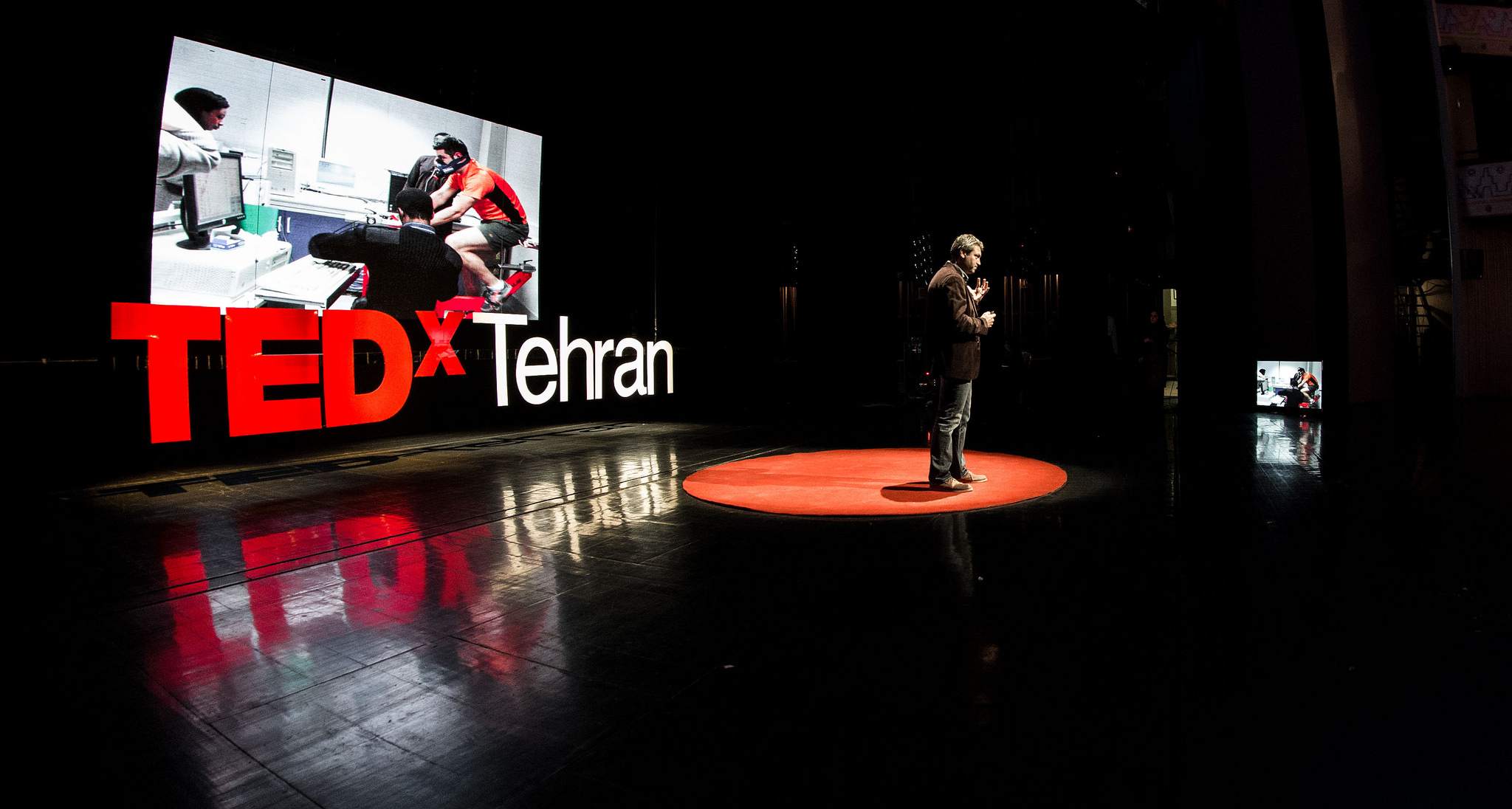 Reza Pakravan talks about cycling at TEDxTehran 2014, themed “On the Verge of Breakthrough.” Photo: Ali Taheri

It’s not every day that you see a desert cyclist, a Tanbour virtuoso, a Persian literature professor and a health systems expert in the same room together. But at the second TEDxTehran, held in September, they all took the stage, sharing stories of their “breakthroughs.” In the audience, representatives from TEDx events in all corners of Iran — from the coastal city of Kish to the Gholhak neighborhood in Northern Tehran to the Northwest province of Qazvin — took notes on the ideas presented, while absorbing the ingredients of a memorable, inspirational and substantive TEDx event.

By next year, 12 TEDx events will have taken place in Iran. But when Sara Mohammadi first applied for a license in 2012, there had been none. In fact, Tehran was the only major urban city in the Middle East that had not hosted a TEDx event. “It felt like a piece of TEDx was missing,” she says, “like there was a hole in the idea map of TEDx.”

Mohammadi admits she never planned to apply to organize a TEDx. She first got her feet wet when she responded to a tweet from the organizers of TEDxKish requesting volunteer help. But when the event was cancelled, she wasn’t sure where to channel her energy. She contacted TEDx organizer Giorgio Ungania, who she had met at TEDxAbuDhabi, and asked if she could be part of that team. Under his mentorship, Mohammadi mastered the art of pulling off a great TEDx event. She decided to plan her own.

“I always saw TEDx as a constructive non-political and non-polemic platform to bridge Iranians with the rest of the world and vice versa,” she explains. “Thirty years of alienation means a lot of lost opportunities to have synergy of ideas with the world, to come up with collaborative innovative solutions and to truly contribute to the global community.”

TEDxTehran’s current licensee, Reza Ghiabi, agrees that TEDx is the perfect platform to “stimulate the exchange of ideas in the city” and a great way to unearth the ideas nestled in the urban epicenter of Iran. 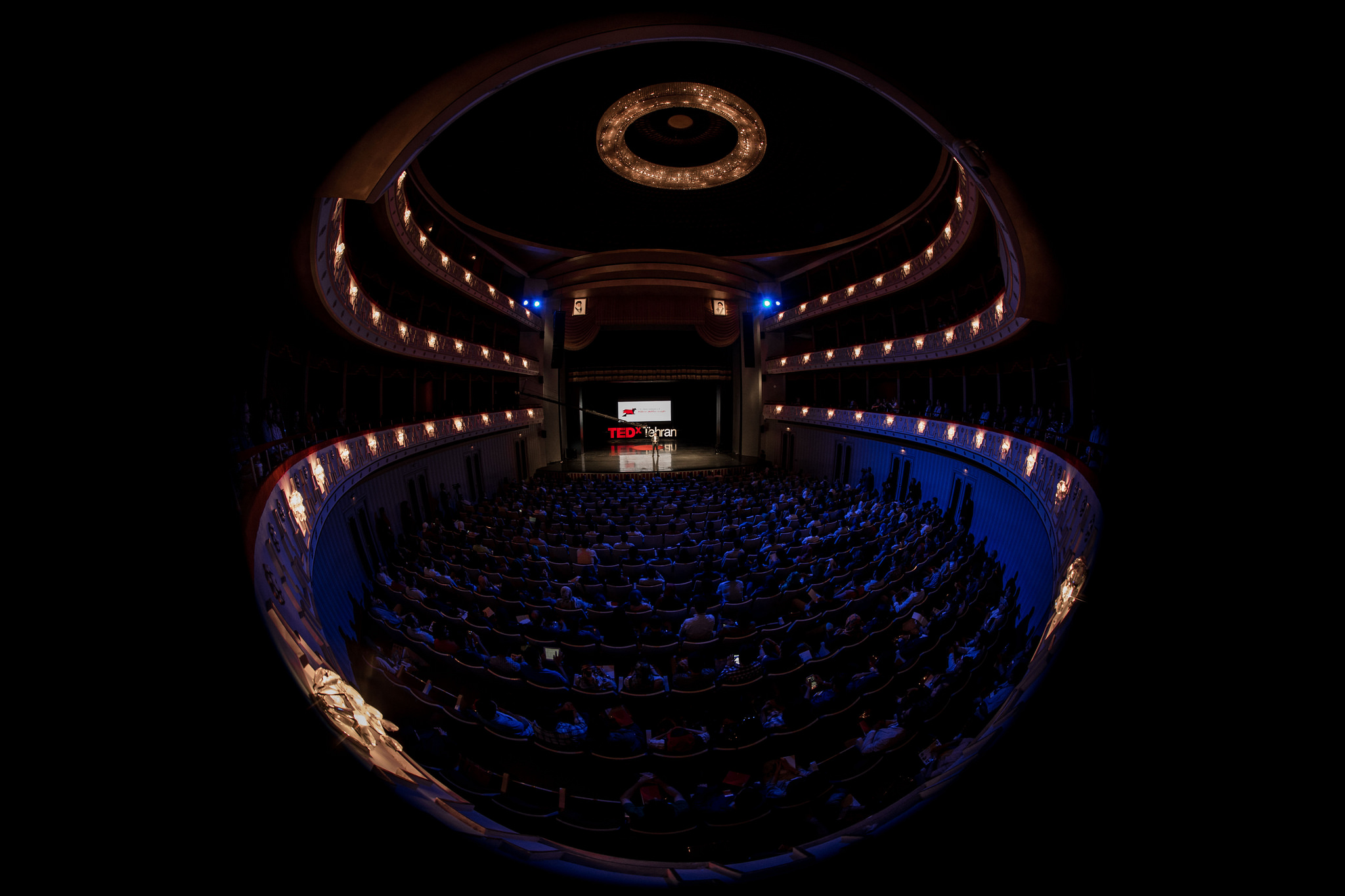 Inside Vahdat Hall, where TEDxTehran was held. Photo: Ali Taheri

Ghiabi’s TED journey started when he first stumbled across the talk, “The Paradox of Choice” by Barry Schwartz. From that point on, he was hooked. He began volunteering to help translate TED Talks from English to Persian, and then heard about TEDxTehran on social media, in the same way Mohammadi had been first drawn into the TEDx world too. Ghiabi wrote an email to Mohammadi asking to contribute, and she brought him onto the team. He became a volunteer, and then a co-host for the very first TEDxTehran.

On February 14, 2013, Mohammadi, Ghiabi and an army of passionate volunteers launched TEDxTehran, with the theme “En Route.” Both Mohammadi and Ghiabi believe that Iran could help them lead global conversations, as well as tackle major environmental and societal challenges. “With a population of 8 million and rising, Tehran’s biggest and most valuable resource is human capital,” explains Ghiabi. “We wanted to create a way to nurture local talent and ideas, and feed them back into our community.”

After their first successful event, Mohammadi shifted over into a new role as an advisor with Ghiabi stepping into her original position. “It’s like a passing of the torch,” says Ghiabi, “like the spreading of great ideas.” For the second event, Ghiabi and the team decided on the theme of “Verge of Breakthrough” to build on of the journey already set into motion. “Tehran was already en route towards a new future after the first event,” says Ghiabi, “One year later, we are ready for a breakthrough.”

The event was a major success, “an absolutely great TED-like experience,” according to Ghiabi.

And it was also an opportunity for TEDx organizers in other parts of Iran to exchange best practices and share experiences, he says. “I truly hope people experienced a breakthrough, in the truest sense,” Mohammadi adds, “be it in their relationships, personal choices, ideas they are conceptualizing, technologies they are creating, or careers they are building.” 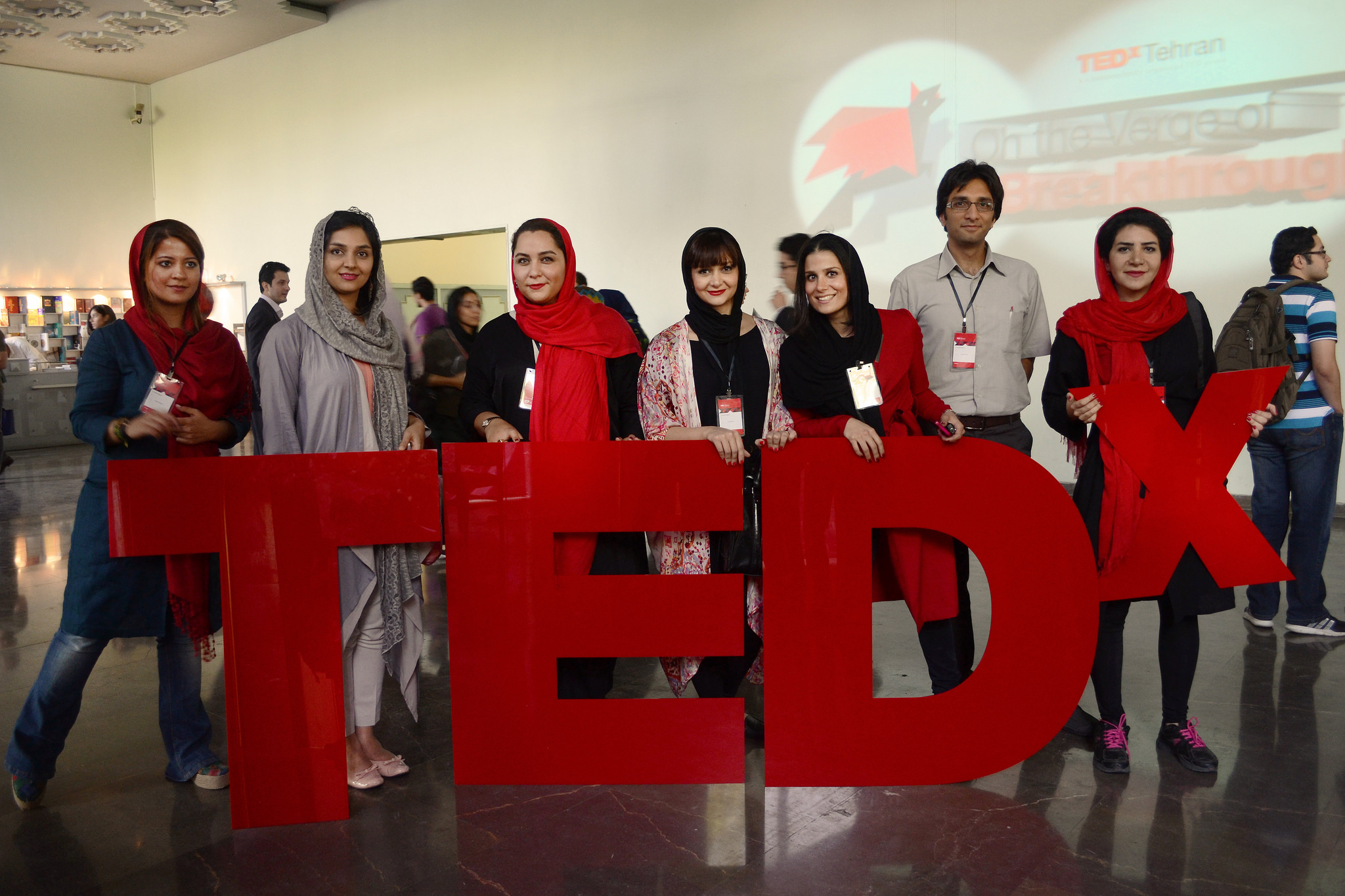 TEDxTehran, itself, was a breakthrough for Iran, paving the way for eleven more TEDx events. Mohammadi remembers that when she was preparing the first TEDxTehran event, one of the organizations she approached for a partnership warned her that others would reject the idea of a TEDx in Iran. She pushed on, and saw no resistance from the government or religious groups. Instead, she was surprised to discover they had the full support of partners, universities and the press.

Ghiabi believes that the reason for TEDxTehran’s success is simple: “We understand the culture of TEDx and the Iranian environment, and find the points they share.”

The TEDxTehran team works hard to balance the rules of TEDx with the current cultural climate in Iran. By beginning TEDx small, and at the local level, it helped the event proliferate in the long run, Ghiabi adds. “You get the best experience for the community, crafted by the community,” he says

Two years in, TEDxTehran’s community is no small pond: 7,000 fans cheer on TEDxTehran over Facebook, in addition to their 1,000 Twitter followers. “Keep in mind this is in a country where Facebook is banned,” says Ghiabi.

Ghiabi says that hundreds of Tehranians are interested in volunteering at future events. And in this way, the cycle of passing on the torch continues, with leaders growing future leaders and events spawning new events. Which is a good thing. “There is still a lot of room for positive impact,” says Mohammadi. 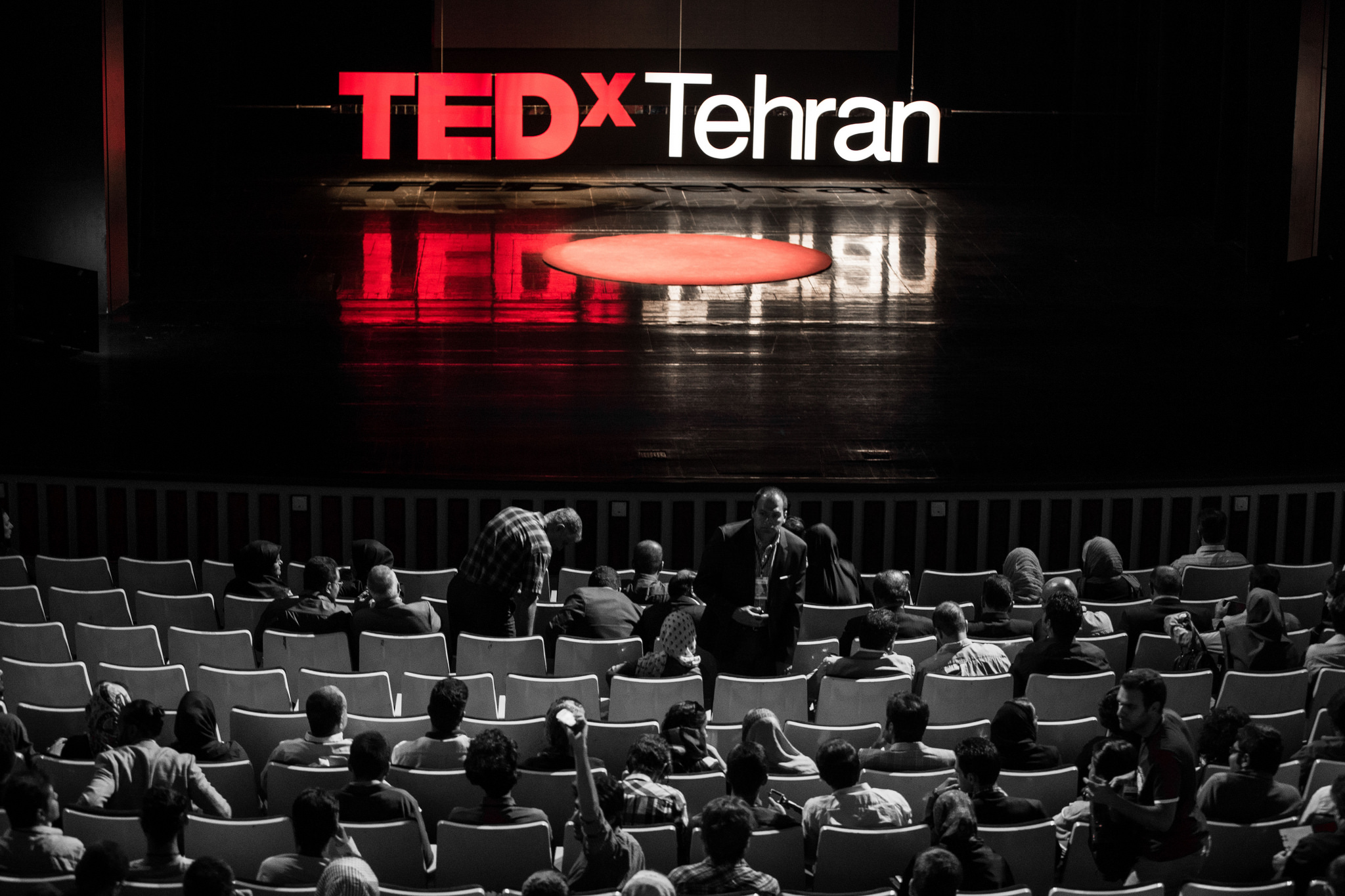 The audience at TEDxTehran finds its seats. Photo: Ali Taheri