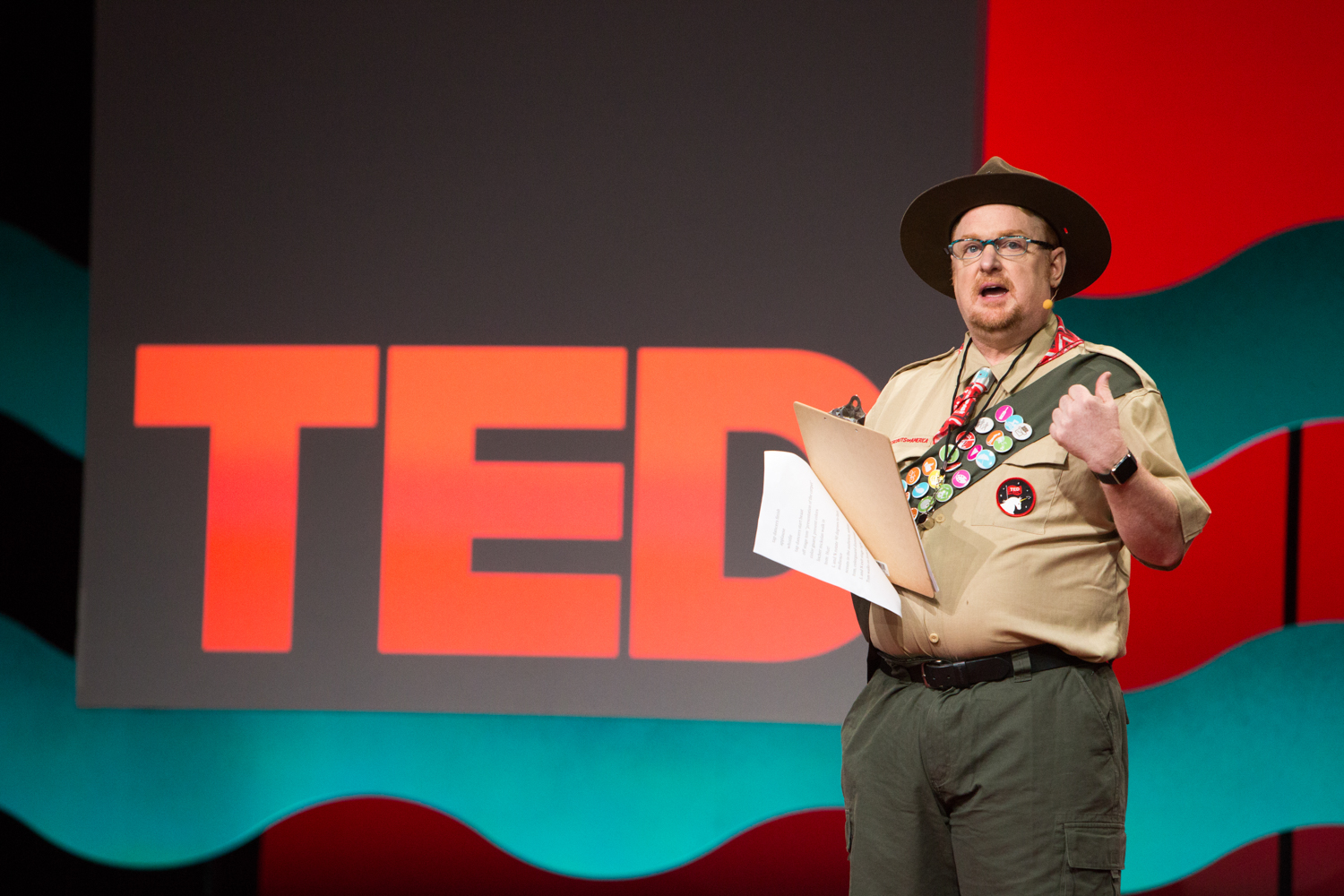 Camp: a home under the stars and sun. A space to dream, commune with friends, create — and play. That’s the atmosphere TED Fellows director Tom Rielly wanted to create for this year’s TED Fellows Retreat, which took place at the Asilomar Conference Grounds in Pacific Grove, California, August 25-28. To create the look and feel for the event, he commissioned satirical artist and TED Fellow Safwat Saleem to bring his sense of color and whimsy to all the details — from backpacks to bandanas to (de)merit badges.

Saleem tells the TED Blog how he came up with the design language for the Retreat:

“I went to scope out Asilomar months before the retreat. It is built right on the Pacific, among sand dunes, cypresses and pines. It was designed in 1912 by Julia Morgan, of Hearst Castle fame, so there’s an elegant feel to the rustic, exposed wood and stone buildings.

One of the first things I noticed was the cafeteria bell, which rings through the grounds at mealtime. When the bell goes off at 6pm, it’s time for dinner – and you have to be out within an hour. It really felt like camp. The Retreat’s theme unfolded from there. We thought: what if all the staff members were camp counselors with whistles? What if we made neckerchiefs like the Boy Scouts?

The name of the retreat had already been decided: “Swimming Against the Tide” – a nod to the marine environment, as well as a tribute to the Fellows, who so often work against the odds and mainstream to achieve extraordinary things. The challenge was to represent the name, the camp aesthetic and the natural environment with a design language that could be modified and used from signage and printed materials to stage design to accessories.

During that first stay in Asilomar, I was amazed to hear the ocean waves roaring all night through the window. Meanwhile, I thought about how, at camp, one of the things you do is write letters home — and the postmark stamp looks like a wave. Finally, I thought about a salmon swimming upriver and its sine-wave movement. These three thoughts coalesced into a wave pattern that became the visual motif of the Retreat. We developed the colors: beige, blue and green to reflect the sand, water and trees of Asilomar.

The design extended into the built environment. Michael Witlin, the retreat director, took the camp theme and colors and ran with them — lighting up the night courtyard with large blue and green bubble lights, so that it glowed with a watery hue. As people walked into the Sunset Theater for the TED Fellows Talks, the theme of trees, water and sand extended into ambient and atmospheric video projections made by TED Fellow Gabriel Barcia-Colombo.

I haven’t designed anything at this scale before, where the visual vocabulary was woven into every aspect of a multi-day event. It was great to work with a group of people who don’t say ‘no’ much. I could come up with ideas — ‘Let’s do a camp flag with unicorns!’ and ‘Let’s do (de)merit badges!’ — that would likely be turned down by a more traditional client. This team was all for it.” 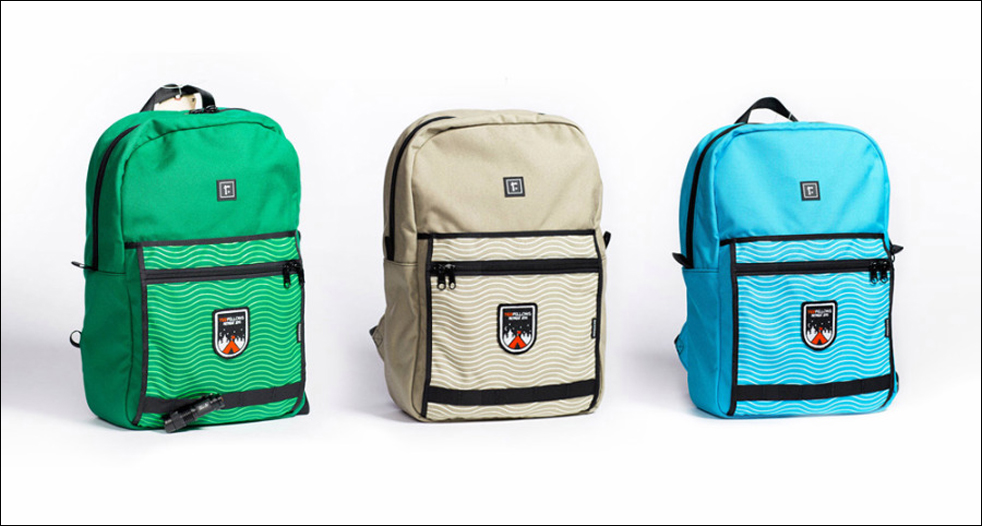 “The Retreat backpack, made in collaboration with Mark Dwight of Rickshaw Bagworks, came in green, beige and blue. The front panel was screen printed with the wave motif, and decorated with a hand-sewn patch of a tent nestled under the stars.” Photo: Bret Hartman/TED 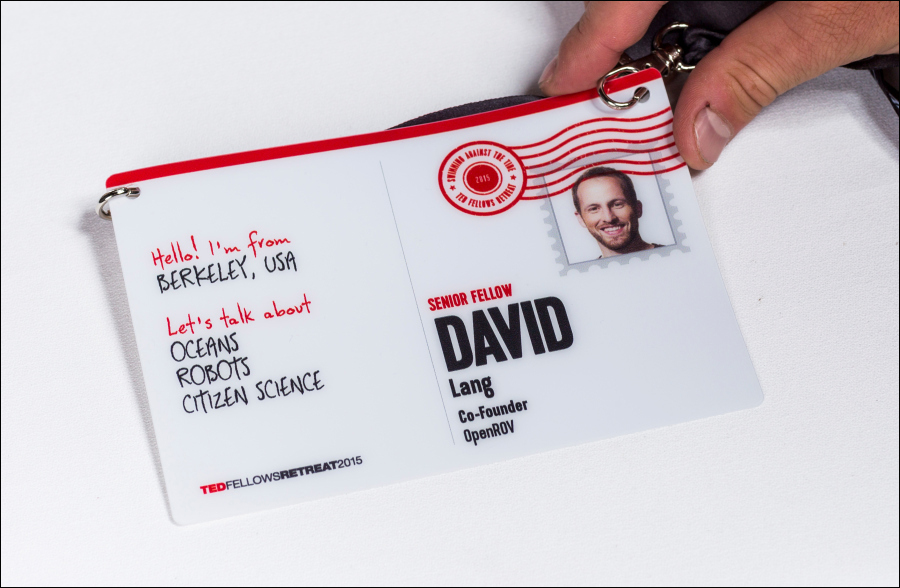 “The TED Fellows Retreat badges were designed to look like postcards with postmarks. The postmark design was echoed in a projection onto a courtyard wall at night.” Photo: Bret Hartman/TED 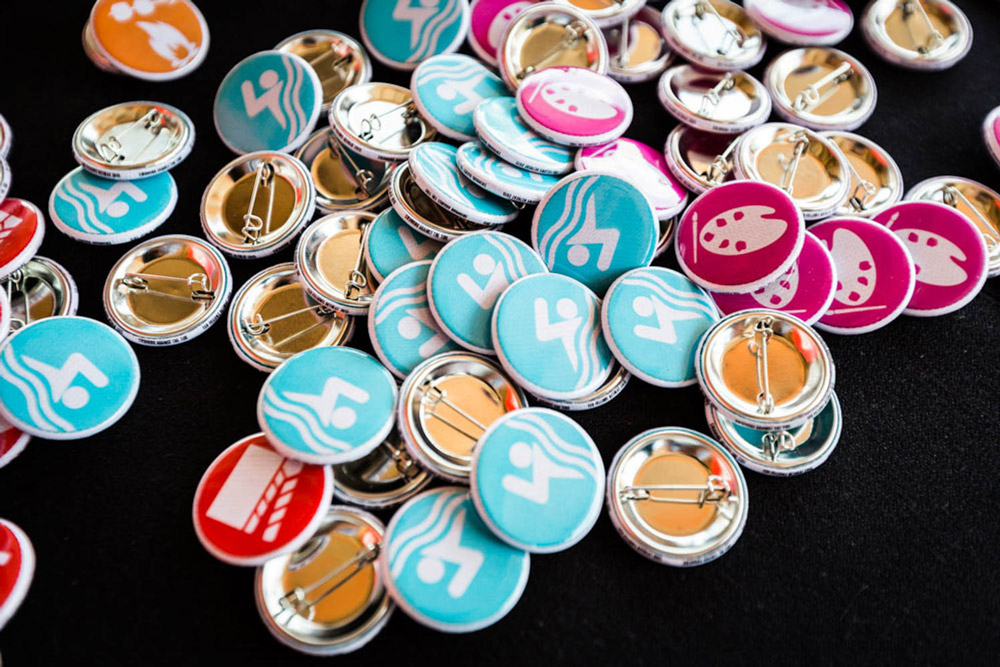 “We wanted Scout badges, the kind you get when you’ve learned how to make a fire. But embroidered patches are expensive, so we designed pins. There’s one for each activity we did at the TED Fellows Retreat — whale watching, kayaking, participating in the talent show, etc. But a few are tongue-in-cheek. Fellows are legendary for taking snacks home after conferences, so there’s a stealing snacks badge.” Photo: Bret Hartman/TED 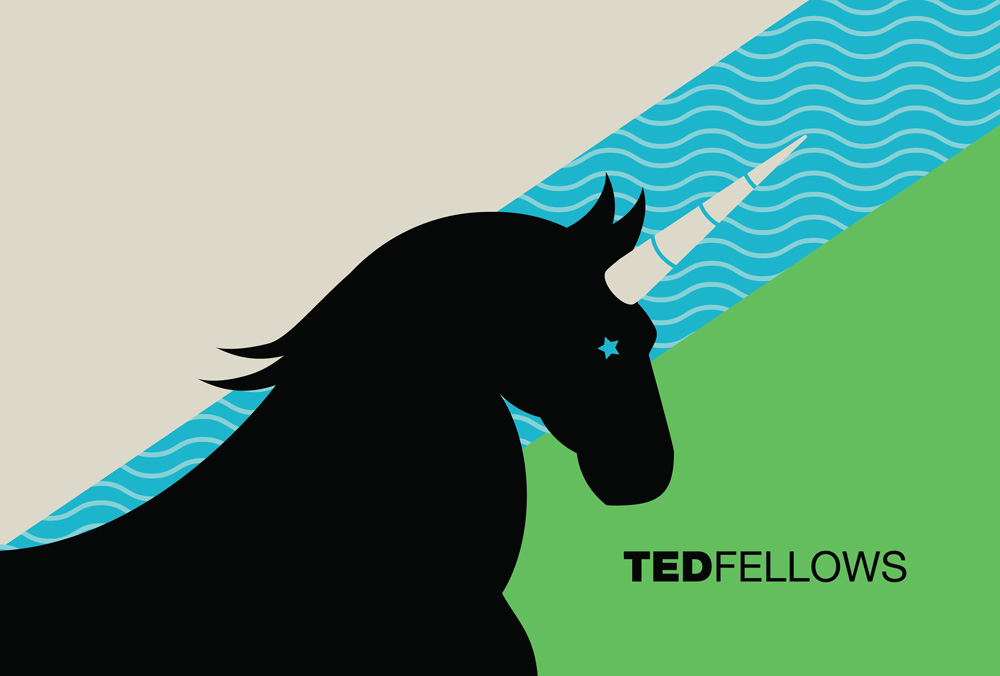 “Boy Scouts always have flags, so we designed a custom, tongue-in-cheek flag for the TED Fellows Retreat. The day of talks opened ceremoniously with Tom Rielly marching onstage and waving it.” Image: Safwat Saleem 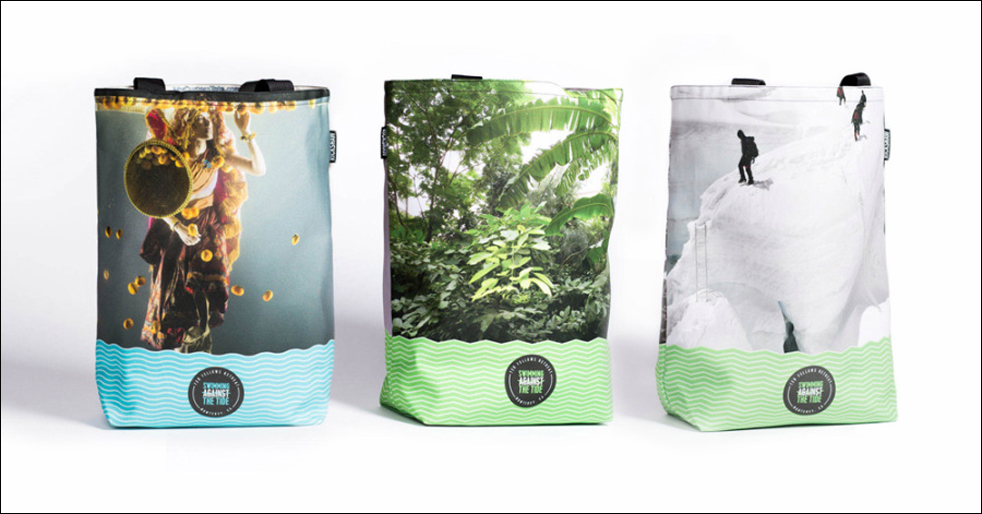 “We digitally printed tote bags with images representing the work of 90 Fellows — one on each side. The images weren’t paired randomly, I found a visual connection — be it color, element or placement. Each bag could be printed on-demand, so we were able to make 45 different image combinations. We wanted everyone to have one that was as close to unique as possible.” Photo: Bret Hartman/TED 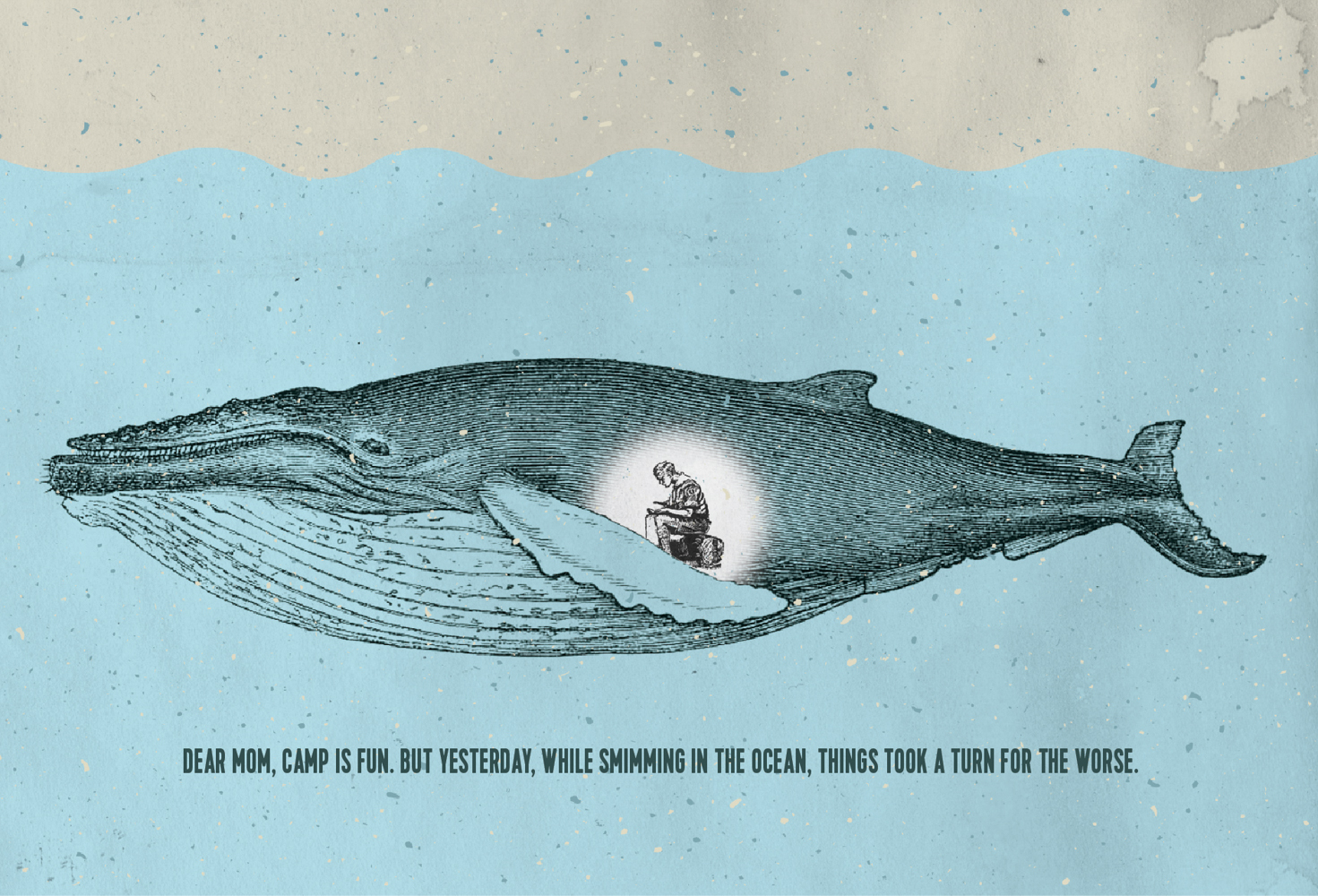 “In the satirical vein of Allan Sherman’s ‘Hello Muddah, Hello Faddah,’ I made a set of six postcards with nontraditional messages to help TED Fellows keep in touch with people at home.” Image: Safwat Saleem 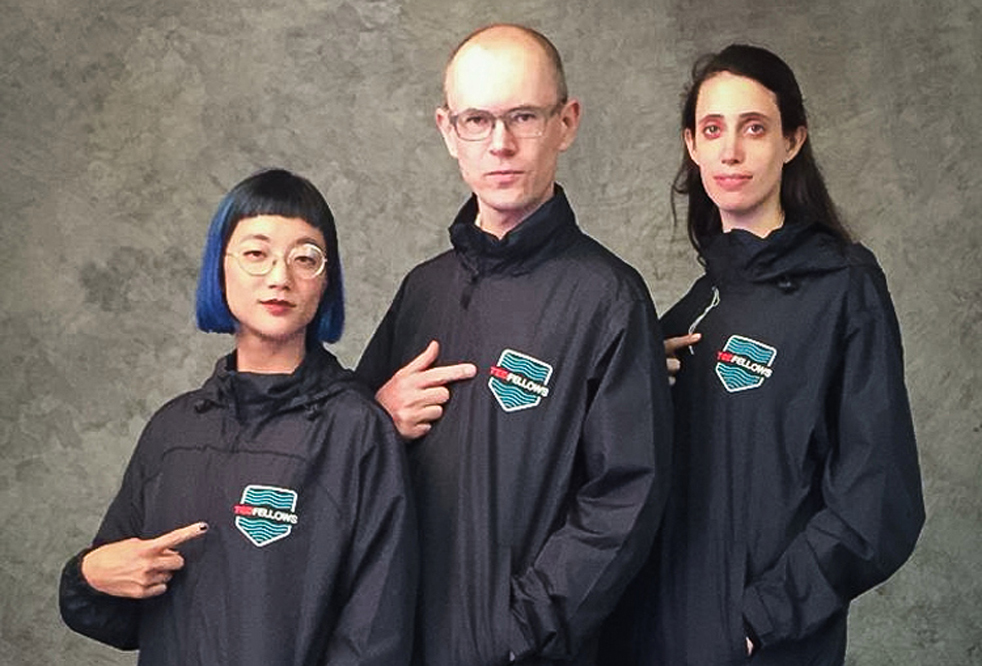 “We gave all the TED Fellows a special retreat windbreaker — modeled here by Christine Sun Kim, Chris Woebken and Kitra Cahana. The chevron-shaped patch has the ‘Swimming Against the Tide’ logo.” Photo: Bret Hartman/TED 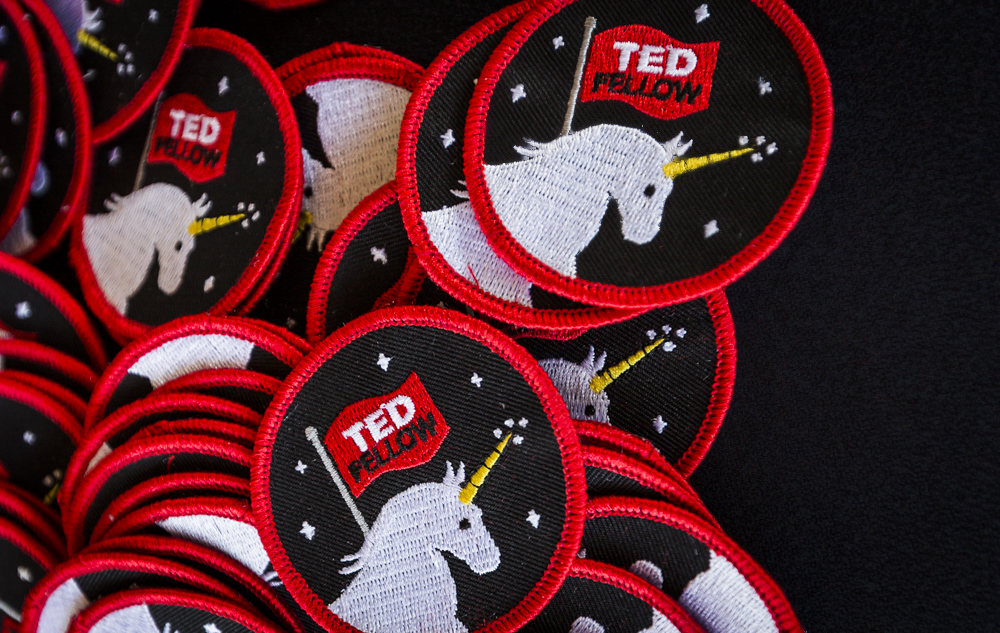 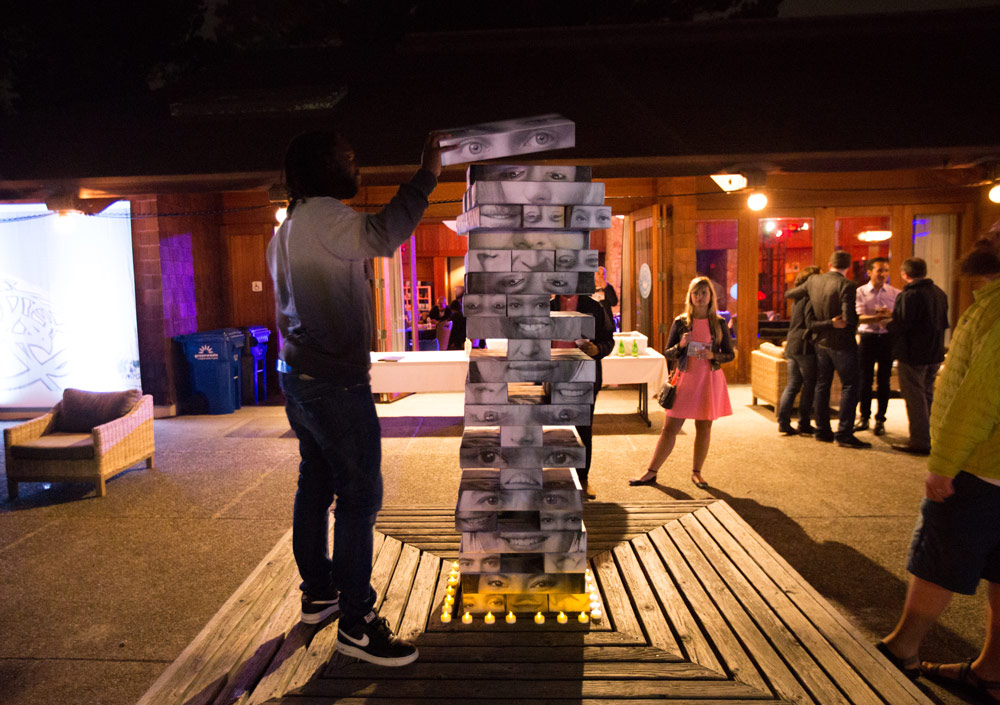 “Staying true to the camp spirit, we wanted to have old-school games that attendees could play. TED Fellow and designer Sarah Sandman came up with the giant Jenga idea: huge blocks made out of photos of the Fellows.” Photo: Sarah Sandman