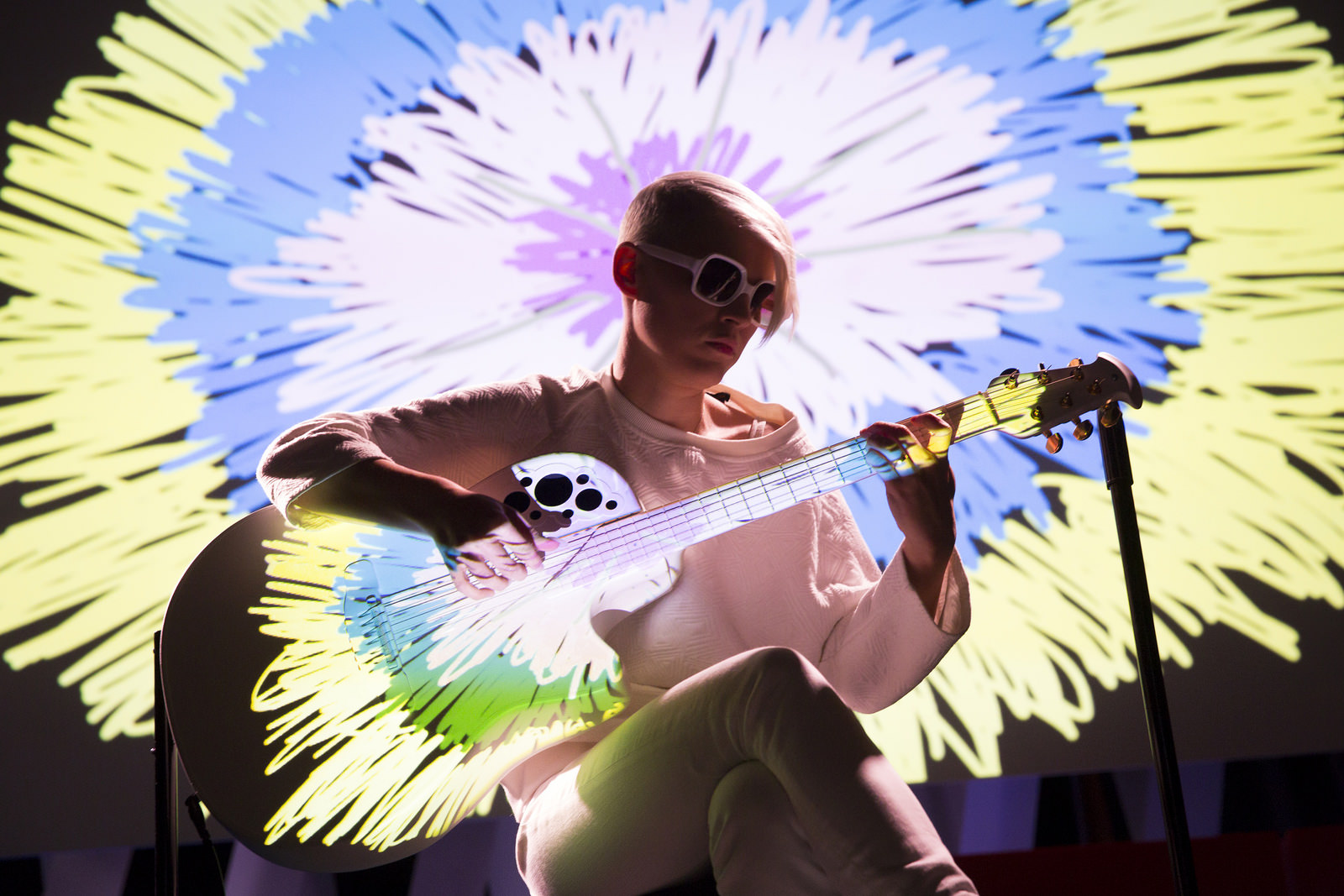 Kaki King’s new show features project mapping — and aims to make her guitar into a living entity. She used the littleBits synth kit to prototype the show. Photo: Marla Aufmuth/TED

Four years ago, TED Senior Fellow Ayah Bdeir founded littleBits “so everyone could unleash their inner inventor — without having to be an engineer.” Since then, many people have used littleBits’ electronic building blocks to do just that — and two of them happened to speak at TEDWomen 2015.

Want to find out how how guitarist Kaki King created her latest show using a littleBits synth kit? Or how inventor Christina Mercando used littleBits to prototype a ring that connects to the Internet? Read on …

The sound (and sight) of music

Guitarist Kaki King’s multimedia show, “The Neck Is a Bridge to the Body,” uses projection mapping to turn a guitar into a living, breathing entity onstage. Standing upright as if on its own, her customized, white Ovation guitar “takes on an almost humanistic quality,” said King. “It looks otherworldly, so full of character.”

The direction for this show, which King performed an excerpt from at TEDWomen 2015, took shape underneath a tree in Brooklyn. A team of video and sound engineers from Glowing Pictures needed King to map out the music for the show so they could start creating the visual effects. King had to write a “brief” of her musical vision — a dramatic departure from her usual, more intuitive process of writing music.

“The guitar always has a say in what it wants me to do – it leads me to the next chord … Songs write themselves,” said King. “This time, I had to take a big notebook to the park, sit under a tree and really think about what I was trying to create.”

Working this way gnawed at her. And yet, she really wanted to try projection mapping. She struggled with how to make the guitar, rather than a computer, the star of the show.

One afternoon, King walked into a guitar store. “They had a littleBits Synth Kit out and I just started playing around with it,” she said. “I thought, ‘Wow, this is so cool.’” With the kit, she could produce a synthesizer’s sound effects directly from her guitar.

After “a lot of experimentation,” King ended up attaching the synth kit modules to her Ovation, effectively creating a new instrument. “I wanted to make every sound come out of my guitar,” she said. “But the back of my guitar is round, so I couldn’t attach the modules in a linear way. We had extension wires going everywhere.”

With the help of clever lighting, the wires remained invisible to the audience. All they see – and hear – in the show are the vibrations of the guitar, reflected in large, on-screen visuals that move in tandem with King’s plucks and strums.

The performance crescendos during the song “Battle Is a Learning.” (Watch above.) “At that point, it’s gotten to this crazy pinnacle and visually it’s quite overwhelming,” said King. “You’re kind of going, ‘What else can happen?’ And then, it escalates.”

As King plays sludgy notes, psychedelic stripes light up the screen and guitar. They fracture into jagged shapes and static as she plays. Finally, King turns away from the strings entirely, and begins to manipulate the back of the guitar. As she creates piercing sounds, her body goes dark — the guitar appearing as if it’s playing itself. The stage fades into darkness with the final note.

How can she top that? King is now experimenting with embedding LED lights into her guitar.

The tech that puts a ring on it 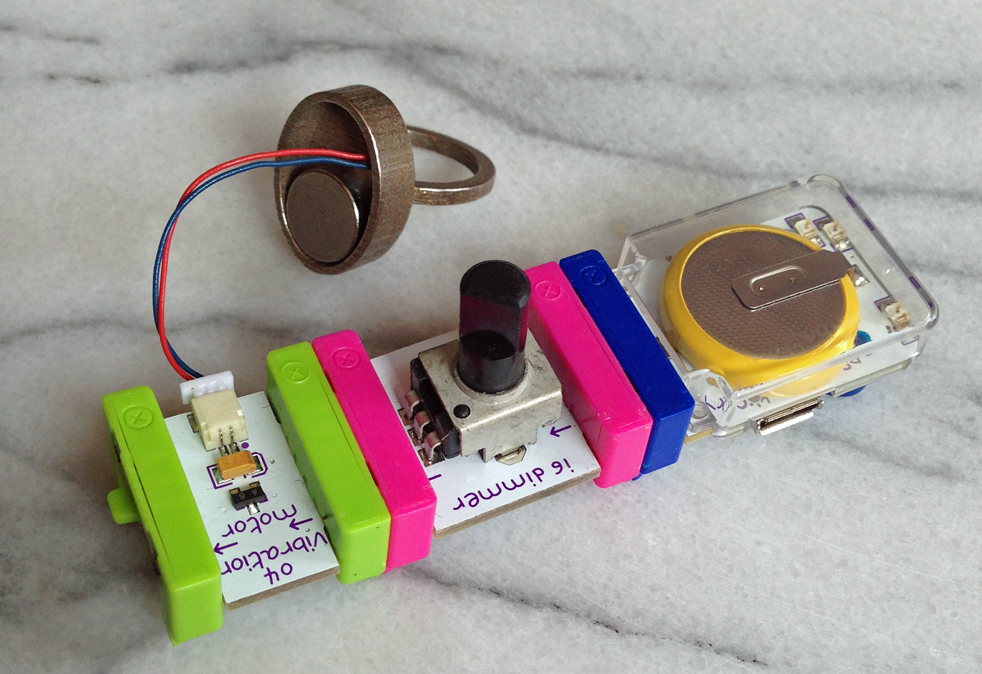 Ringly is a piece of jewelry that’s like a “personal assistant.” The prototype for it was created out of littleBits. Photo: Courtesy of Christina Mercando

Christina Mercando has created a smart ring — Ringly, a piece of jewelry that connects to your phone. “It’s meant to be a little personal assistant, letting you know when you have certain notifications,” she said.

At TEDWomen 2015, Mercando demonstrated how Ringly shares information with its wearer: by subtly lighting up when, say, a spouse calls or vibrating in a specific pattern when, for example, a meeting is coming up in five minutes. “We don’t always have to stare at a screen,” she said. “Technology can hide in the objects we interact with every day.”

Mercando wanted to create a ring because it’s “much more personal” than other wearables. And because “I knew that if we could get the technology small enough to fit into a ring, we could put it into a lot of other form factors too,” she said. But this of course presented a challenge. While it is only slightly smaller than a postage stamp, Ringly actually includes 50 components of miniature tech.

To prototype the design — and figure out how people might feel about wearing a vibrating ring — Mercando turned to littleBits. “I knew how to do the software and design piece, but the electronics were new to me,” she said. 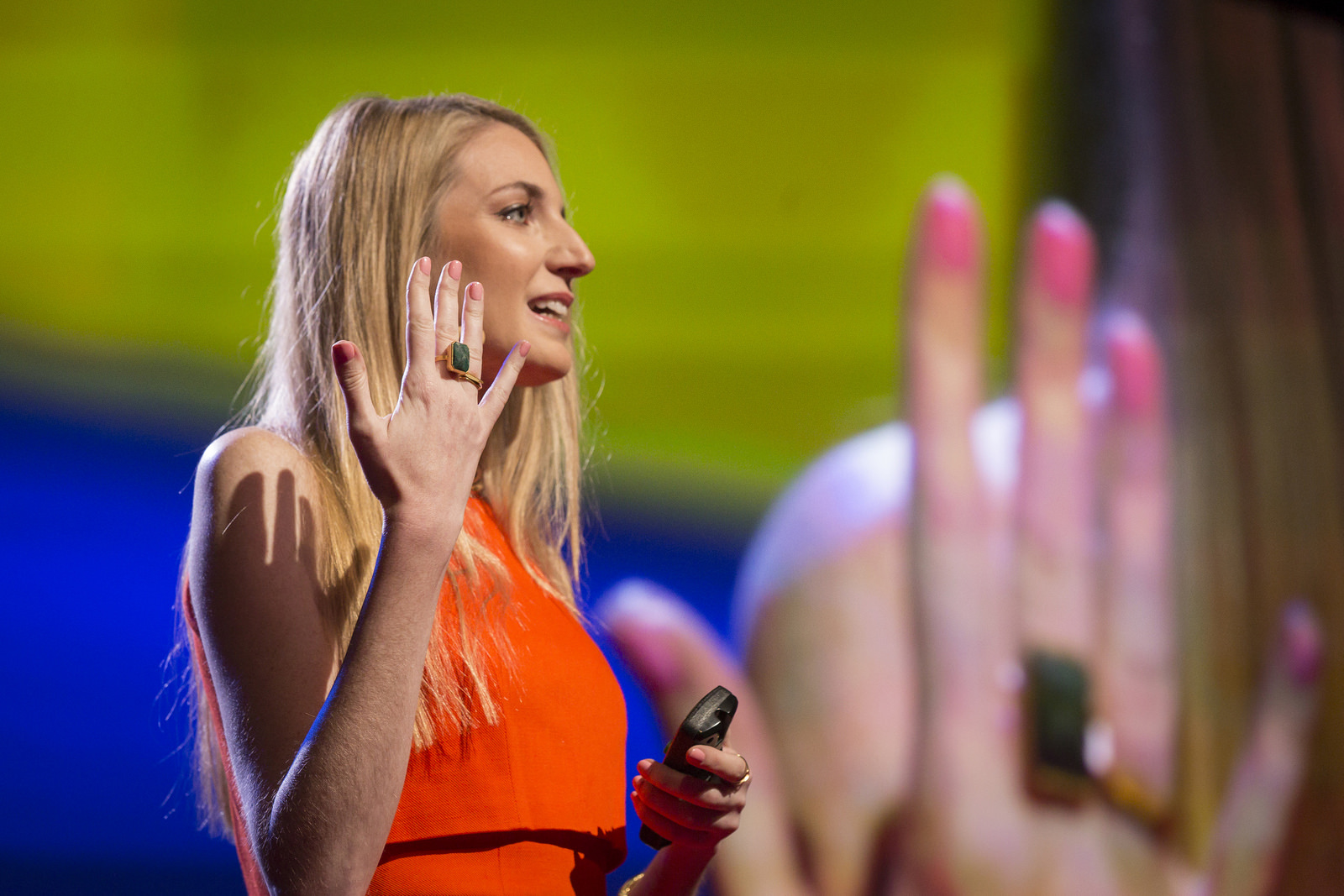 Mercando used a littleBits kit that included a motor, lights and a dimmer — “to control the intensity of the vibrations” — and paired it with gemstones and 3D-printed jewelry. The prototype (take a look above) simulated the sensation of having a ring vibrate. And while it was much larger than the final product, the prototype appealed to the test group.

“They thought it was so cool,” said Mercando. “When you feel it on your finger, it’s ‘wow.’ It actually feels good and is not as intense or as weird as we thought it might be.”

The prototype ended up influencing Ringly’s final design. Mercando tested out different gemstones with littleBits lights. “Originally, I wanted the gemstones to glow. But I realized that we were limited by the type of gemstone,” she said. With the added light, the colors changed even with different stones. “That’s why I made the decision to make a more subtle light at the side of the ring.”

Overall, the littleBits prototype helped Mercando share her vision – and not just with investors. Armed with her prototype, Mercando found herself in a waiting room at an investor’s office about to pitch Ringly. Coincidentally, she was sitting next to littleBits creator Ayah Bdeir.

Bdeir remembers this moment well. “We got to chatting and Christina told me that she makes connected jewelry. She asked if I’d like to see a prototype and I said, ‘Oh sure.’ She took out the prototype — and it was made with littleBits,” said Bdeir. “I was like, ‘Oh my god, I created that product!”

“It was a really nice coincidence,” said Bdeir. 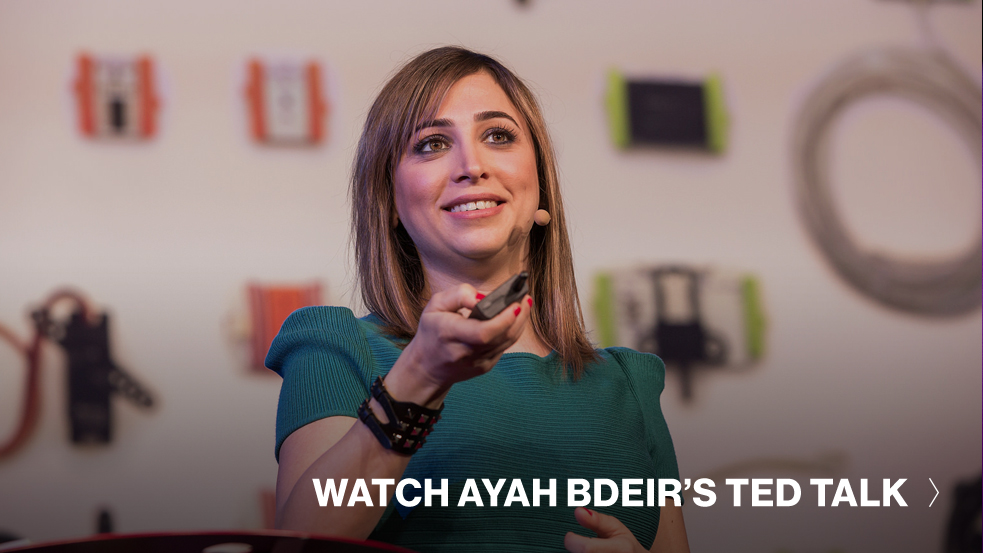 Mark Ronson plays with littleBits at TED2014, along with the creator of these electronic building blocks, Ayah Bdeir. LittleBits have taken off in the past year — the company just announced $44.2 million in new funding, and two speakers at TEDWomen 2015 used them in their electronic experimentation. Photo: Ryan Lash/TED