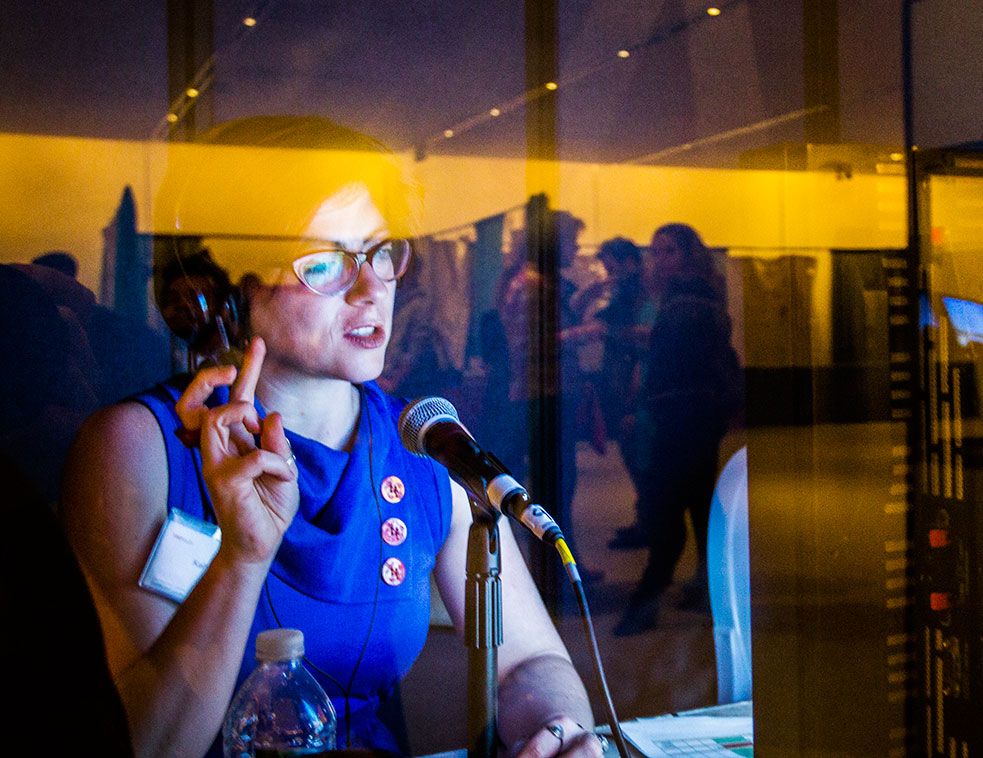 Spanish interpreter Kelly A.K. in the booth at TEDYouth 2012. She and four others will interpret Saturday’s TEDYouth into Spanish and Arabic in real time. Photo: Mike Femia/TED

TEDYouth will be livestreamed on Saturday, November 15, for free — and not just in English. This event, meant for students and, well, anyone sparked by general curiosity, will be translated on the spot into both Spanish and Arabic, to make it watchable by more people around the world.

Five intrepid live interpreters will make this happen. They’ll sit in soundproof booths, watching on monitors and listening through headphones as the event proceeds in English. In real time, they’ll transpose the words into their target language by speaking into a microphone. It’s a task that takes intense concentration, so they’ll trade off every 20 to 30 minutes for a rest. Each team has an electronic dictionary at the ready.

Live interpreters prepare by reading up as much as they can on the speakers, to make sure that they’re familiar with their subjects and know the kinds of terms that might pop up in each talk. But still, no amount of studying is foolproof.

“Interpreting requires understanding someone else’s speech — the structure, the speaker’s viewpoint, the intention. You often have to anticipate what the speaker will say,” says Sarah Edelman, who has lived in four countries and will be live interpreting in Spanish. “Although there is a lot of preparation, there are always moments of uncertainty due to last moments changes … You need some training in order to not fall off your chair under that kind of pressure.”

For her fellow Spanish interpreter Kelly A.K., the hardest part is having to juggle multiple tasks. “You’re listening to something new and difficult to grasp, translating it into another language in your head and then speaking it out in the other language,” she says. “The hardest part is to listen, think, translate and speak all at the same time.”

So what happens when the live interpreters get tripped up? Edelman explains, “When you interpret, you are not interpreting words so much as concepts. If you don’t remember a word, you go around it, and find an explanation or a synonym. The most important thing is for the people in the audience to understand.”

A.K. agrees. “If you stop for a word you can’t find in your head, you will miss a lot of the talk. So you just have to move on and sometimes you can come back,” she says.

To her, this isn’t so scary as it is part and parcel of the task. “‘To translate,’ in its etymology, means ‘to betray,’” she says. “Even the best translations in the world are betrayals to the original text, because no two words in different languages have the same exact meaning … I love the challenge. I am always learning new things.”

Mikhail hears that. “I always do my best to translate to the closest meaning based on my comprehension,” he says. “I do it because of my passion for both the source language and the target language.”

Tags for this story:
ArabiclanguagesSpanishtales from the translation trenchesTEDYouthTEDYouth 2014
Follow TED
Subscribe to the TED Talks Daily newsletter.
Related Stories